Mario Cucinella - “School at the Fair” in Bologna

For 1600 students in Bologna the first day of school reserved a particular surprise. In Italy, the new school year began on September 14 and in Bologna, the first and only case in Italy, an experimental project was brought to life: Pavilion 34 of the Bologna exhibition centre was modified based on a project designed by architect Mario Cucinella to accommodate 75 classrooms. 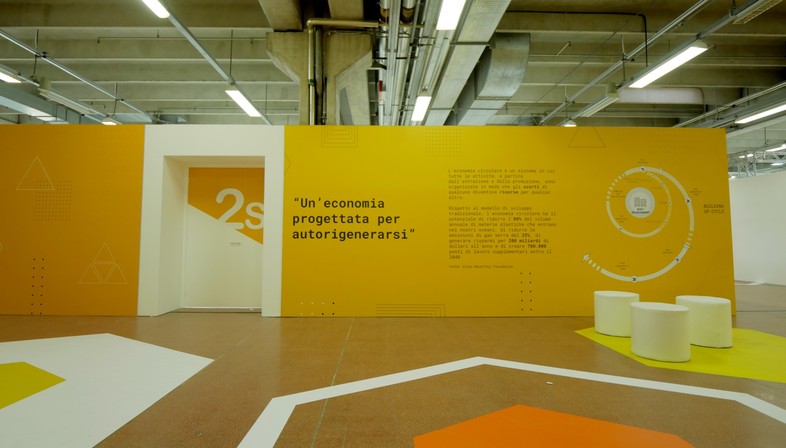 On September 14the new school year was underway in Italy, characterised by conflicting emotions and certainly not free of anxiety: in compliance with all the precautions adopted to avoid spreading the virus, Italian students returned to their classrooms for face-to-face teaching. In Bologna – the first and only case in Italy – on the initiative of the Metropolitan City of Bologna and developed by the MC A - Mario Cucinella Architects firm, an experimental project was brought to life: the use of an exhibition space to organise a school in the post-lockdown world linked to the pandemic. For 1600 students in Bologna the first day of school therefore reserved a particular surprise: the inauguration of Pavilion 34 of the Bologna Fair transformed into a school in record time, thanks to the project created by architect Mario Cucinella. A “mega” school, as it was immediately dubbed, given that Mario Cucinella’s ambitious project has made it possible to obtain 75 classrooms accommodating the 1600 students who attend three local institutes: the Minghetti and Sabin high schools and the Pier Crescenzi Pacinotti Sirani Institute of Higher Education. The choice of a pavilion that is part of the Bologna exhibition centre is certainly not accidental, as the site offers a number of important advantages: it is an area well connected to public transport, while the classrooms created inside the pavilion are set in an already equipped, large and above all already existing space. Features that made it possible to quickly ensure compliance with all the requirements related to physical distances and other anti-Covid regulatory requirements that needed to be adopted.

“The school at the fair will be a great opportunity – explained architect Mario Cucinella presenting the project for Pavilion 34 located at the Bologna Fair – “it will be a school – he continued – built to resemble a small town where students will find the streets named after characters they chose, new classrooms and pathways created to include colours and infographics on environmental issues”.
The project driving this idea of a city is based on three main axes (in line with the number of schools involved). The three axes branch off from the outside to become diversified access pathways to the structure for the three schools. Around each main path a plot of secondary axes have been created, on which the classrooms are distributed. The names of these “streets” were chosen by the students and are inspired by personalities who have played a leading role in recent current affairs. In total, the project involved the construction of 75 classrooms, plus a specific area with 3 Covid classrooms. To build the classrooms, approximately 4,000 panels were used inside the exhibition stand and to ensure the right lighting of the spaces 500 LED lighting bodies were installed.
Faithful to the idea of an urban plot, as ideal “public spaces”, labs and workshops have been included in intermediate sharing areas. A guiding principle was identified for the so-called “city school”: sustainability. The coloured coverings, the walls, the flooring and the furnishings are all used for educational purposes to draw attention to important environmental issues such as the circular economy and the UN’s Sustainable Development Goals. The concepts are expressed through dynamic and interactive infographics using colours to identify a school “district”. Moreover, the flooring graphics also play a specific function: the concentric circles used have been conceived and designed to serve as physical distancing signs. 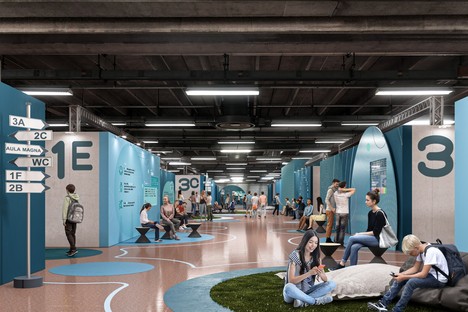 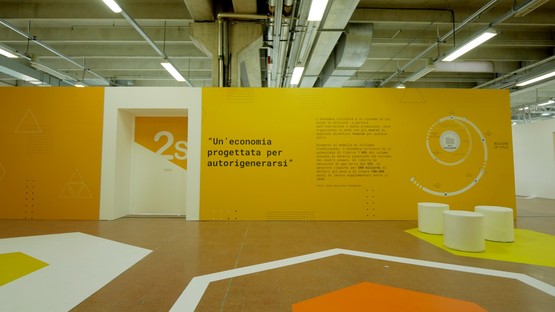 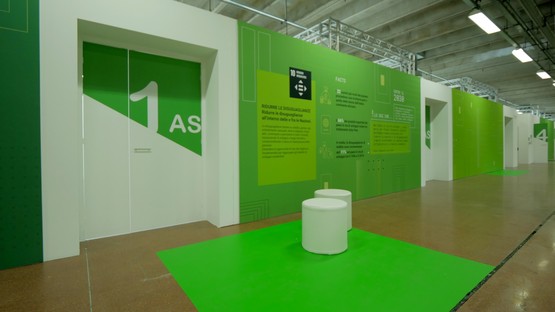 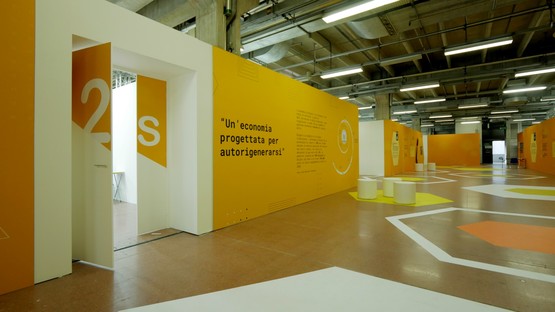 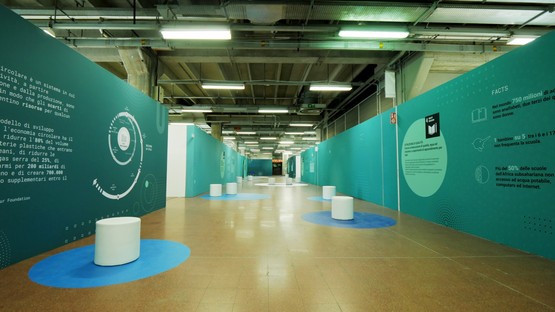