Berching has a new hall for culture dedicated to Christoph Willibald Gluck and designed by competition winner Kühnlein Architektur in a project based on choice of contrasting materials and dialogue with the Sulz River flowing beside them. 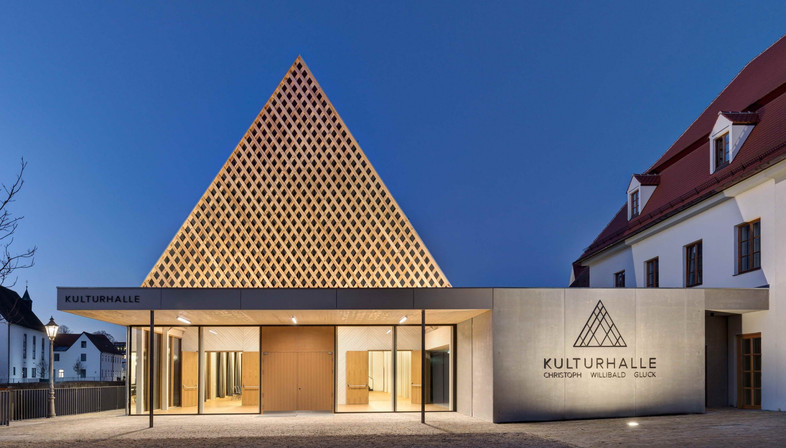 In 2018 Kühnlein Architektur won a public competition held by the Municipality of Berching, in Bavaria, for construction of a hall for culture to stand on a lot in the city centre. The new building will be named after Christoph Willibald Gluck, the German opera composer born in the town.
With a population of less than 9000, Berching is built on the River Sulz, which flows through the town from north to south. The town’s homes and public buildings retain their medieval features, such as pronounced red tiled gable roofs, while the layout of the town is characterised by a minute texture with tiny squares. The town’s cultural centre was Kulturfabrik, a theatre founded in 1994 on the southern edge of the town, no longer suitable for hosting events of a certain size.
A hotel complex built in the 1980s, in the style in vogue at the time but without any particular architectural value, stood by the river in the centre of Berching. The riverside path that has now been redeveloped was hidden by the hotel and thus cut off from the most commonly used pedestrian routes.
To make room for the hall of culture, the town purchased the land and demolished the hotel, which had been abandoned for some time, freeing up about 1500 square metres of land surrounded by prestigious historical buildings: the Post Hotel, a part of the hotel complex which is no longer in use and which will also be reclaimed in another project by Kühnlein Architektur, with a hospital containing a medieval chapel.
The hall for culture is imagined as a part of a new public plaza, surrounded by buildings on three sides and the river to the north. At the point where the walkway along the Sulz meets the open space, a double flight of stairs leads down to the water and a walkway just above the surface of the river leads to the opposite bank, connecting the two parts of the town, which had been separate, on the basis of a project entrusted to studio TEAM 4 Bauernschmitt • Wehner, urban planners and landscape architects in Nuremberg.
Standing in the historic centre of Berching, the Kulturhalle evokes traditional local forms and materials, such as its red pitched roof inspired by the buildings around it or the gable decorated with a geometric wooden grid like an abstract version of a barn wall. The steeply sloped roof and use of timber cladding are references to the domestic world, implicitly suggesting that the hall of culture may also be a home for culture and for those who enjoy it. Built on the same scale as the public buildings around it, the Kulturhalle also takes on the formal role of civic centre. 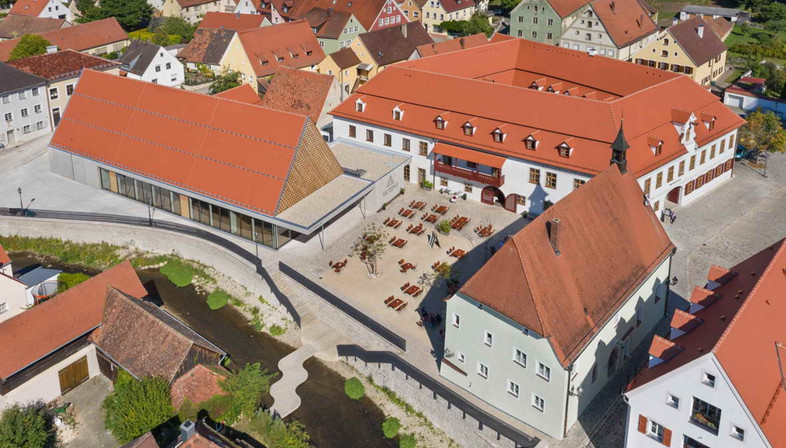 The building consists of a primary block with a gable roof containing a 260 square metre events hall, with a rectangular floor plan constructed lengthwise, tangentially to the river. At the opposite end, a lower, flat side wing occupies the space between the hall and the adjacent Post Hotel, containing accessory facilities such as toilets, a kitchen and a storage room. When seen from the front, the façade looks like a horizontal block of concrete with the Kulturhalle sign on it, extending into a canopy supported by metal pillars, topped by a pointed pediment expressing the collective value and “ sacredness” of the place. The canopy is an invitation to stop in front of the entrance and enjoy the view of the square on one side and the river on the other.
A window runs from the side facing the square all along the wall over the river, establishing a close relationship between the events going on in the Kulturhalle and the natural infrastructure. Michael Kühnlein says the spaces were inspired by the idea of simplicity. The utility block is made of concrete for fire safety reasons, but wood is the main material in the hall. The roof and gable are made of spruce, while the walls are black pine wood from nearby forests, treated with a traditional non-toxic varnish made from casein.
The herringbone timber cladding, with joints designed for their acoustic qualities, contrasts boldly with the visible pipes under the big roof trusses. The light fixtures designed by the studio may appear pompous from far away, but, rather ironically, when seen close up they are clearly bare steel structures with industrial-style fluorescent tubes.
The hall containing the stage and the backstage area offers space for different seating configurations and for hosting events of many kinds, ranging from cabaret to concerts, theatre performances, receptions and conventions. The semi-underground level, linked by a lifting platform, is used for technical equipment and storage. 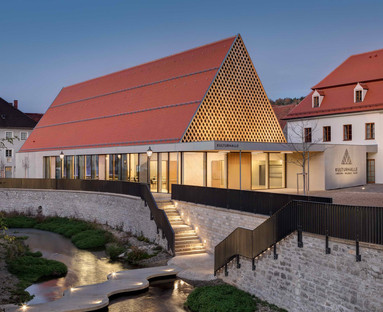 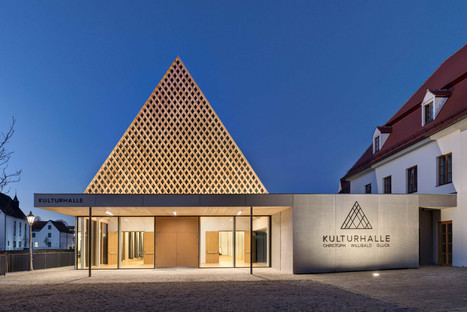 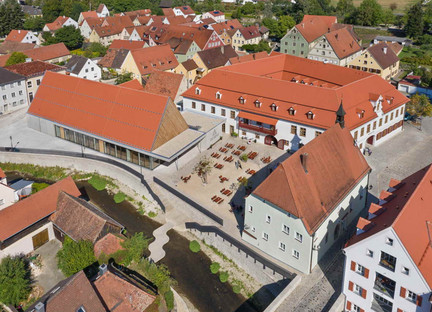 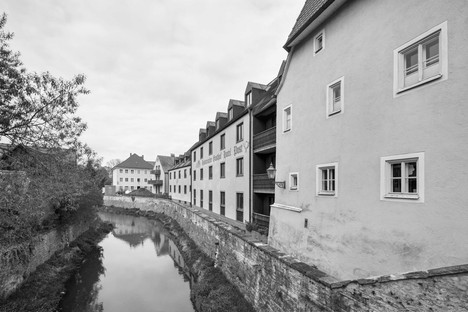 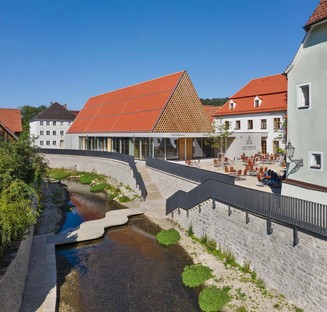 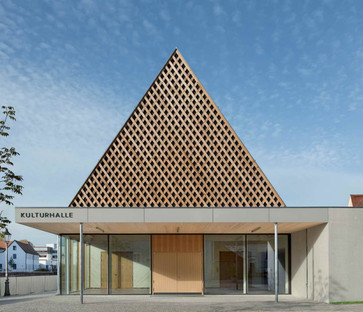 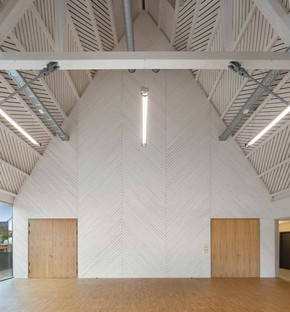 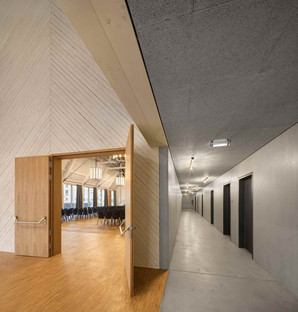 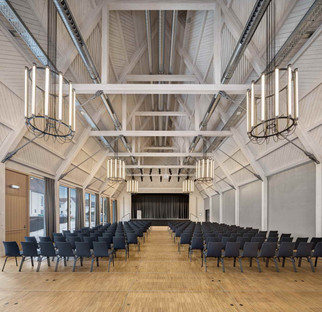 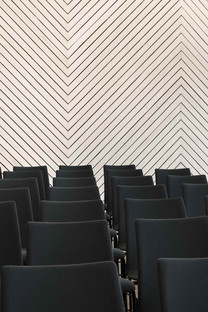 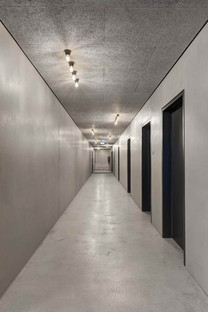 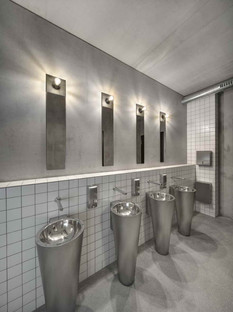 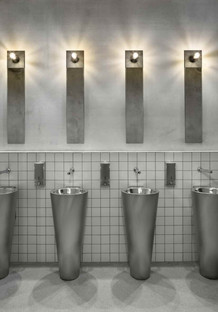 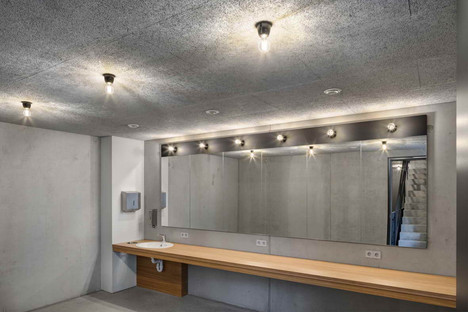 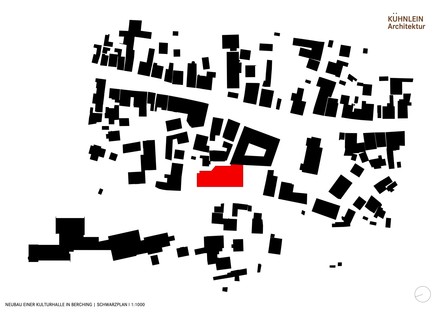 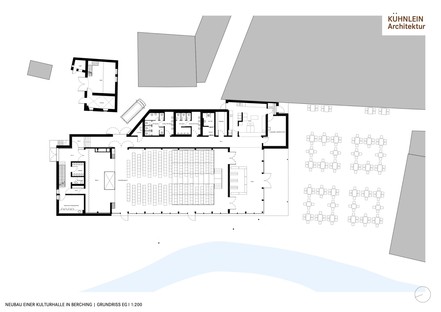 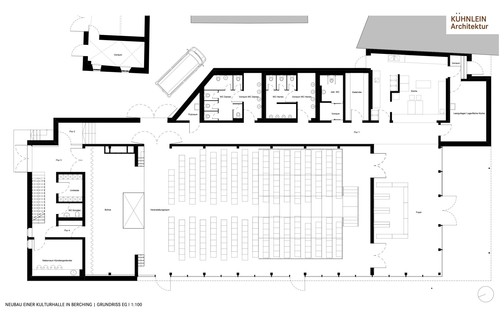 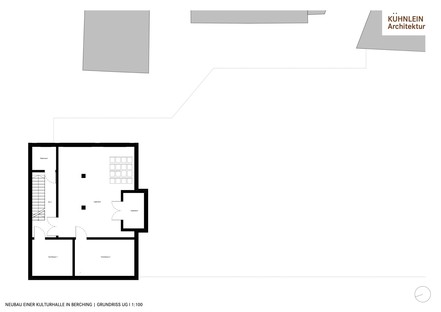 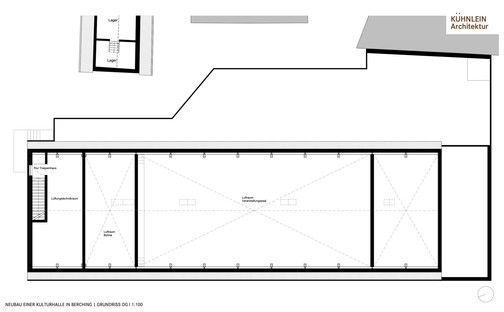 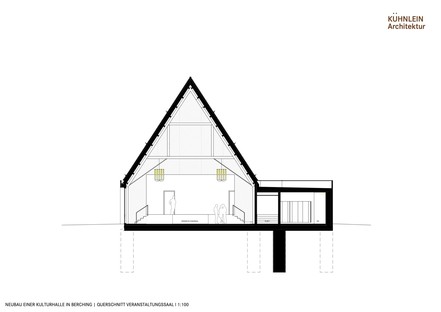 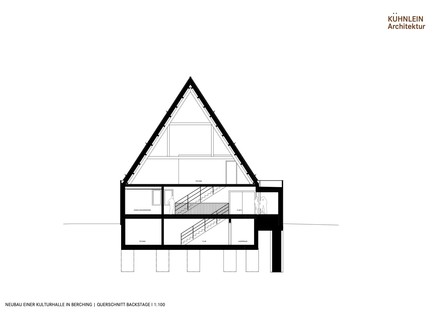 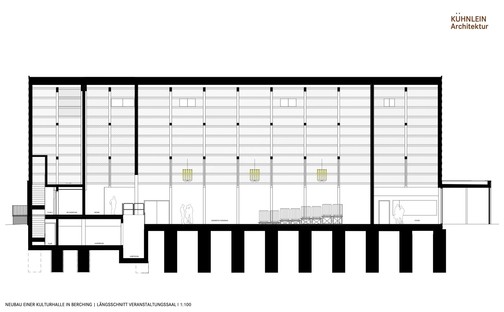 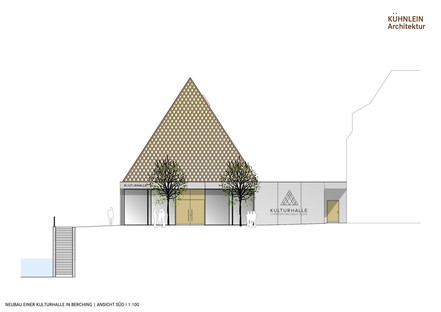