Tradition, water and natural ventilation are the founding elements of this residential project in the Western Ghats, in the Indian region of Maharashtra. Khosla Associates has designed a single-storey pavilion along the slope that runs down towards the lake, with basalt walls and characteristic skylights. 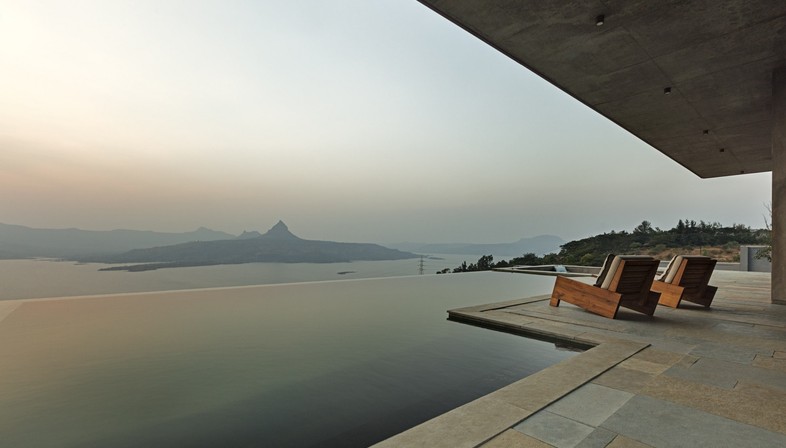 A holiday home in the mountains of the Western Ghats has presented an opportunity to reconnect with the fundamental traditional elements of this country. A wealthy Indian family has commissioned Bangalore-based firm Khosla Associates to create a mountain refuge in an area between the Sahyadri mountain range and one of the lakes in the region. The opportunity that immediately arose was that of designing a private belvedere, a welcoming space stretching out towards the water, allowing its residents to contemplate the surrounding nature. In this region, which stretches 1600km from north to south along the western part of the Deccan Plateau, the wild vegetation, dense forests and timber plantations of teak, sandalwood and ebony - reaching an altitude of 2600m above sea level - provide a stark yet welcome contrast with the hustle and bustle of megalopolises such as Mumbai, where the commissioning family originates from. Getting back into contact with the primordial elements is an idea of great importance for the Indian people, whose quality of life is constantly deteriorating in urbanised areas.
This holiday home in the Ghats makes this constant search a reality, harnessing the benefits of the sun’s rays and the natural ventilation that is due to its proximity to the water. The design consists of a single-storey pavilion building which makes use of naturalistic mimesis by way of the building materials chosen. In relation to the existing road, which passes right past the site to the east, a small service building and garage has been built at a slightly lower elevation, whilst the mountain refuge itself is located further down the slope. In this way, the large roof of the home is at street level, thus avoiding any interruptions to the view of the lake and the mountains on the horizon for anybody travelling along the road.
The perimeter walls of the pavilion are dry-stone walls made from local black basalt, a volcanic rock which is available in abundance in the Deccan Plateau, and obtained by digging just a few metres below the surface of the site itself. Meanwhile, five frustum-shaped skylights emerge from the living block, protruding upwards, making for a light distribution system that spreads the daylight throughout the entire floor. All different and painted in white, they have become a distinctive and unusual sign of the home. The floor of the house rests on a regular rectangular foundation of around 20 x 34 metres, whilst the flat roof, which is raised about 15cm from the top of the walls, almost seems to float, lending the entire volume a certain lightness. Several vertical windows have also been opened in the walls to the front of the house to contribute to this effect. Instead of creating a two-storey structure in order to follow the slope of the site, the design has used the higher part of the site to create a small garden near the road, surrounded by a low walled enclosure as well as a ramp connecting the road with the entrance to the house.
The interiors present a clear distinction between the living and sleeping areas: the former, completely stretched out towards the lake, occupies the western side of the house, whilst the latter - a more closed-off, private area - occupies the east wing, facing the road. The semi-public area is home to the lounge, dining room and kitchen which, thanks to glass accordion doors, opens onto a terrace built around the water. The lake in the distance is the inspiration for the small artificial lake suggested by the infinity pool. Indian tradition has it that water, a vital element, is part of existence itself, and in rural areas, it is all that is visible when surrounded by nature. The people of the city of Varanasi gather twice a day at Ghat Dashashwamedh for the Hindu ceremony of thanksgiving at the Ganges. The steps which descend into the water (ghat), the low steps made for sitting on, and the stone steps which lead down to the surrounding land and ideally to the lake lower down are all parts of the construction which exist as a reference to the Hindu ablution ritual intended as a means of purification.
The private area houses two bedrooms and opens onto a sunken garden, which is more intimate. Whilst the first is extroverted and permeable, allowing nature to penetrate its enclosure, the second is quite the opposite: introverted and secret.
The great simplicity of the layout arranged thusly on a single floor, however, brings with it the difficulty of illuminating the innermost spaces, which are not reached by direct light. This was the thinking behind the skylights, frustums entirely covered with sheets of plywood, with the natural grain of the wood enhanced by the light entering from above. The result is that the ceiling becomes yet another landscape, another scenario to contemplate, with an appearance that varies according to the time of day. This medley of colours is joined by that of the floors, decked out with river rock flooring slabs, their finish alternating between glossy and rough as an allusion to the way a watercourse really flows as well as the different surfaces of the stones. Ceiling and floor thus provide two living, ‘natural’ paths, ever-changing with the way the light shifts throughout the day. The project is neatly tied together by the kitchen, with its Corten steel panelling, essential furniture made from natural wood, various furnishings and objects purchased by the family in Maharashtra.
The cross-ventilation, promoted by the nearby body of water, and the maintenance of a cool indoor climate, thanks to the way the warmer air is allowed to escape through the gap between the walls and the roof, are the results in terms of comfort of a design interwoven with the natural elements, like parts of a traditional system that is still very much a presence in daily life for the Indian people. 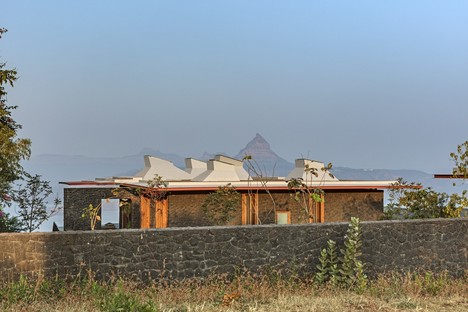 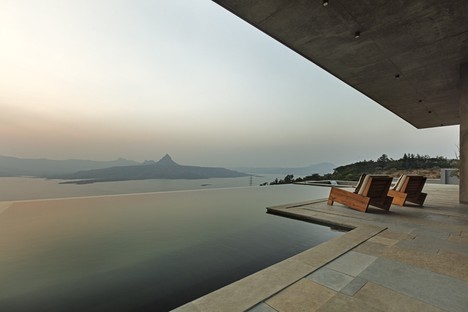 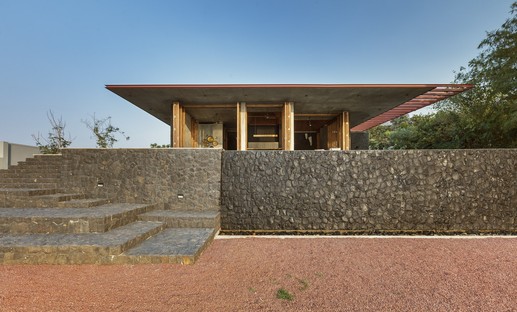 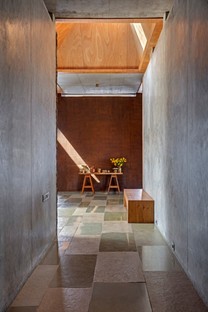 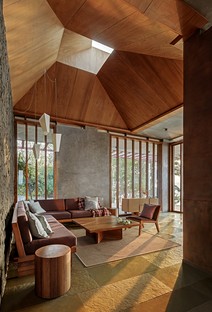 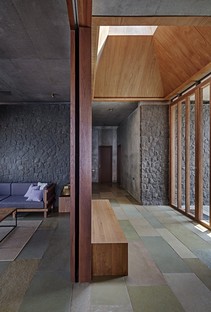 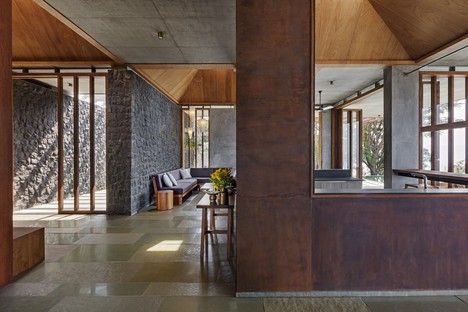 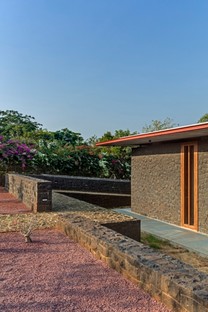 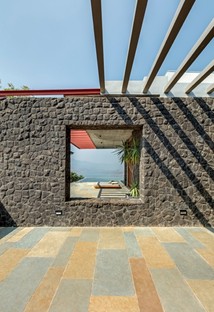 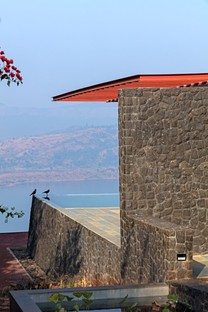 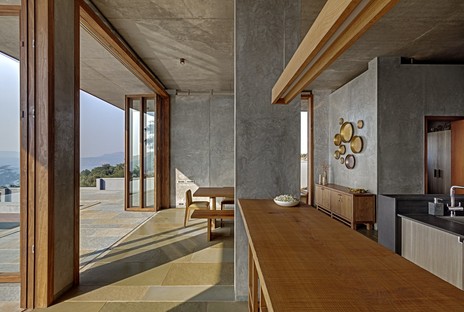 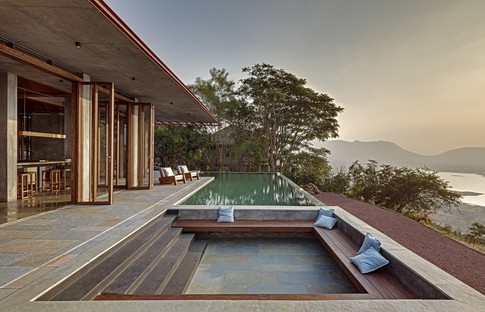 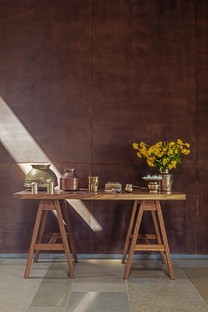 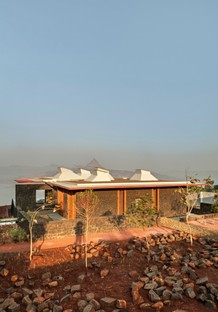 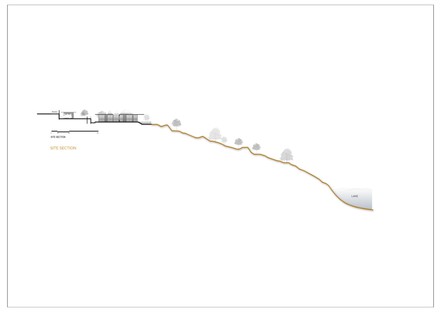 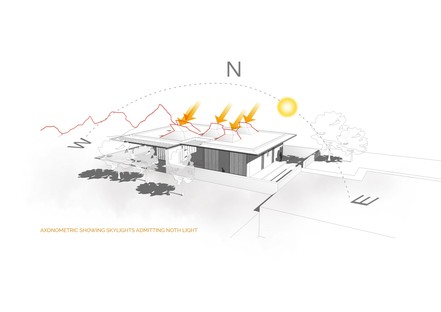 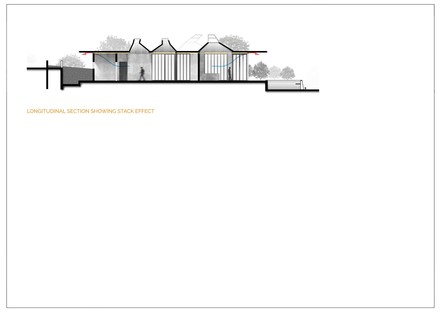 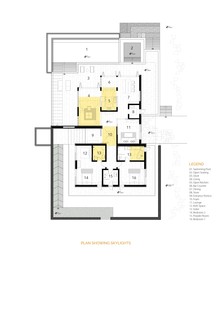