Karim Nader: Villa on the rocks of Faqra, Kfardebian, Lebanon

“On the Rocks”, the latest project from Karim Nader on the slopes of Mount Lebanon, is a piece of residential architecture which fully embraces and engages with its characteristic landscape. The Lebanese architect works on the concept of imitating nature and the potential of concrete and glass, the materials of a new Beirut. 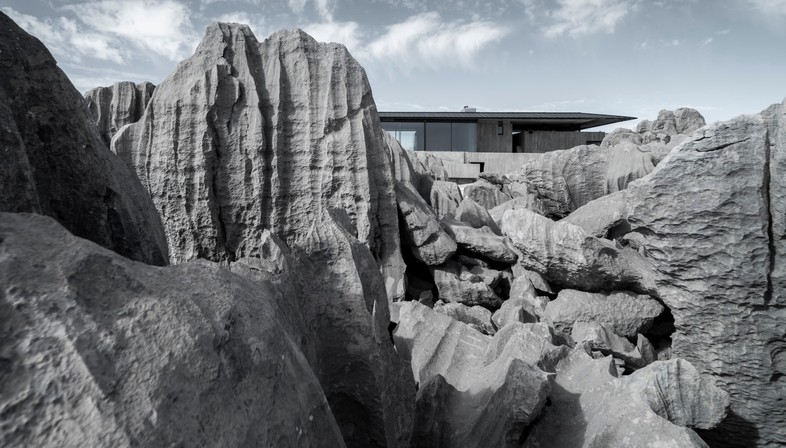 “On the Rocks” is what Lebanese architect Karim Nader has dubbed his project for a villa built in the summer of 2021 in the Faqra ski resort in Lebanon. The idea of drawing inspiration from nature and the characteristics of the site itself when building has very much become a given for a new wave of Lebanese architects, whose work is now recognised and admired at an international level.
When designing the villa in Faqra, however, Karim Nader and his firm saw the opportunity to go beyond the mere reproduction of a form, instead bending and moulding the traditional construction materials used in the country, such as concrete, to the morphology of the location.
Nearly ten years earlier, on this very same road, the firm had previously worked with Blankpage Architects on an entry for a competition to develop a 10,000m2 resort on a clifftop near Qalaat, the archaeological site known for its Roman and Byzantine ruins, also a UNESCO World Heritage Site. Despite the fact that the project did not ultimately come to fruition, the drawings show an approach very similar to the one later successfully used just a stone’s throw away in the villa on the rocks, along with an ability to echo the mimetic power of nature and a striking boldness in the architectural forms. Faqra is a resort located around 1700 metres above sea level, on the outskirts of the village of Kfardebian on Mount Lebanon. It previously arose not long ago in the context of a private residential project set to become part of a collection of villas and resorts created to cater to ski tourism, attracting an affluent clientèle from the capital, Beirut, which is located only 50km away. Karim Nader’s villa stands on a calcareous rock substrate, with extraordinary erosion due to weathering, where cliffs and natural viewpoints provide spectacular vistas over the landscape as far as the Lebanese coasts of the Mediterranean Sea. It seems that because of their conformation, these rocks - known locally as ‘ghost houses’ - appear to be multiple enigmatic presences, with protruding surfaces sculpted to form almost fabric-like draperies. Careful observation of the jagged details, shades of grey and their modulation of light over the course of the day formed a crucial part of Nader’s preparatory research. This research, as he himself claims, always provides him with the intuition that underpins every single one of his creative solutions; a sort of ‘spontaneous synthesis’ which appears to be the exact right response to that specific situation and which must subsequently be checked against measurable criteria (materials, financial constraints, client’s preferences, regulations, etc.).
The villa is built not out of stone, as it may seem at first glance, but rather with what is now a traditional Lebanese building material: concrete, which can take on a stone-like appearance, especially as time wears away at it. As such, the rooms of the house are made of concrete, organised as a collection of different cells, perhaps inspired by the development of Faqra itself, which is not a classic conurbation with central and peripheral areas, but rather a spread-out resort made up of many scattered residences. Glass, which has also become a key material of a new Beirut in its post-war reconstruction, is a feature of the large living area in particular, which seems to stretch seamlessly into the surrounding valleys thanks to the extensive use of transparent surfaces. The massive, highly material presence of the grey volume is softened somewhat by the transparency and sense of permeability created by the glass walls.
A large zinc roof covers the entire surface of the main floor and ties together all the rooms. What appears to be a single-storey villa standing atop the rocks when seen from the north is actually - when viewed from the west or the south, along the access road - revealed to extend to two more underground levels, the existence of which is all but invisible to the outside world. 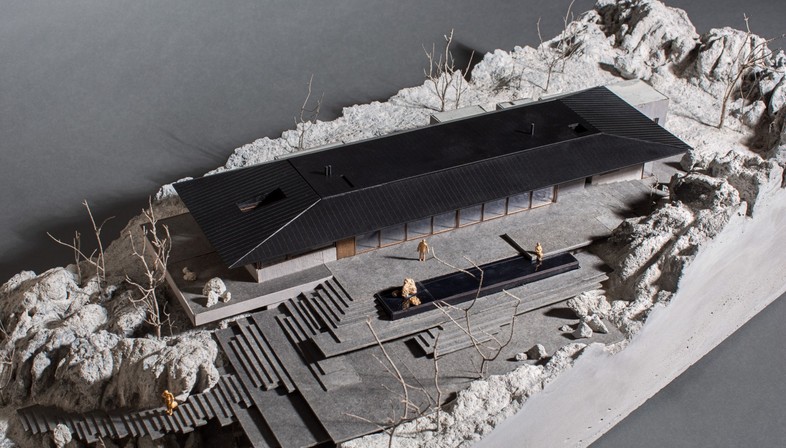 The architecture is pervaded by a strong sense of unity, with its roof apparently a single, impossibly thin ‘sheet’ which - almost floating over them - protects the individual components of the house, be they rooms or overhanging terraces. The steps that make up the outside staircase are all different and not aligned, as if intended to imitate the course of a natural path.
The absence of contrast between the natural and the manmade is a result of Nader’s ability to modulate this synthesis, where the latter seems indistinguishable from the former, despite the vertical development of the rocks providing a sharp contrast to the linearity of the concrete planes. There is a surprising sense of dynamism established between the forcedly horizontal direction of the roof and floors and the diminutive ‘cells’ of the living spaces, punctuated by passageways and openings, echoing the natural fissures found in the rocks. The architecture’s deconstruction into parts and the textures of the main materials are the keys to the project blending seamlessly into its natural setting. 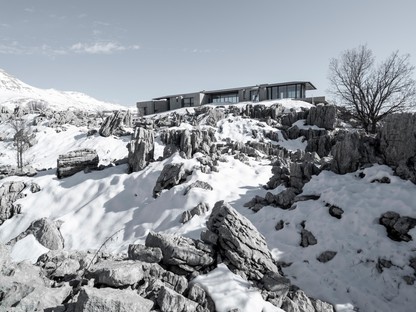 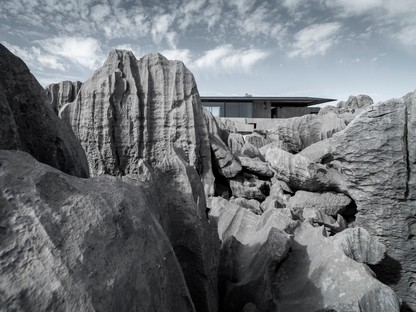 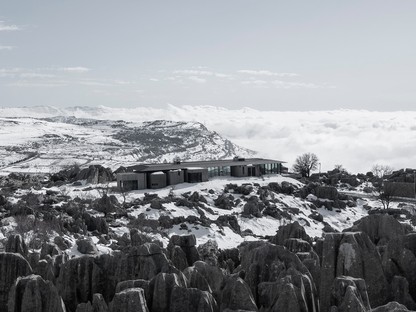 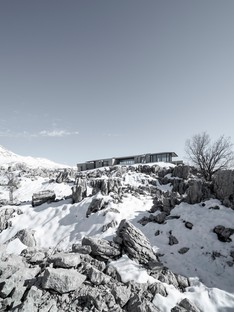 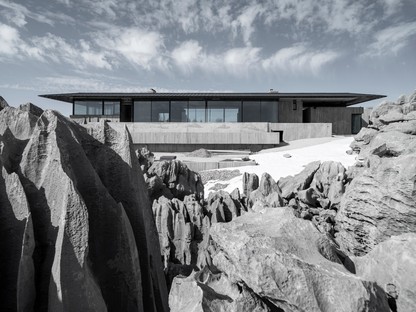 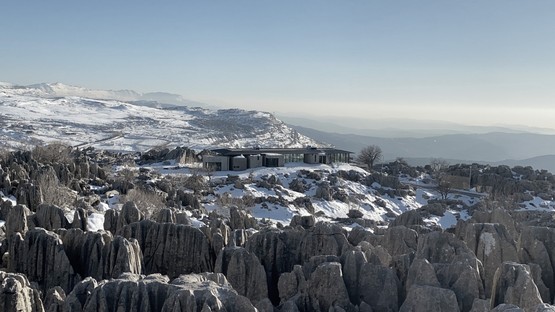 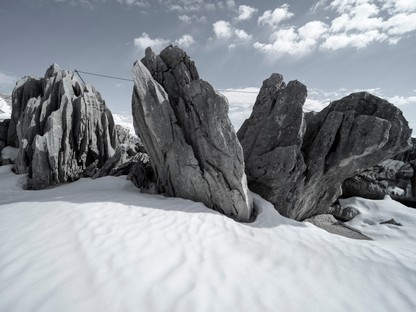 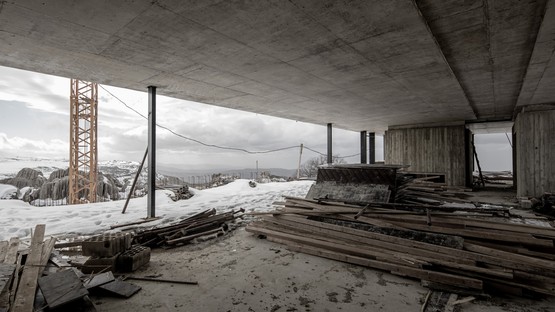 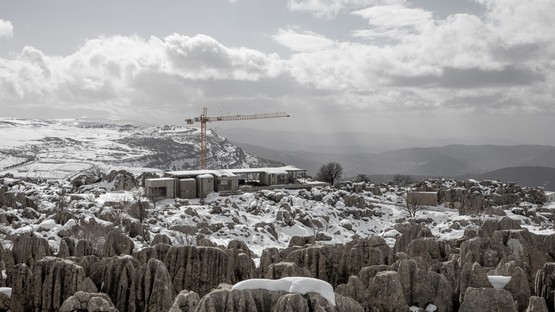 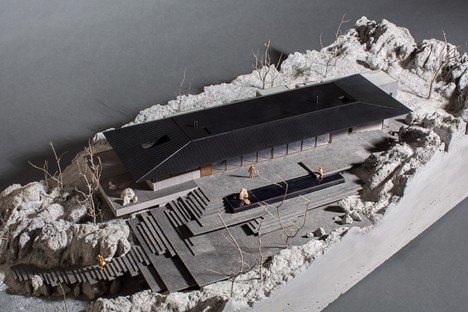 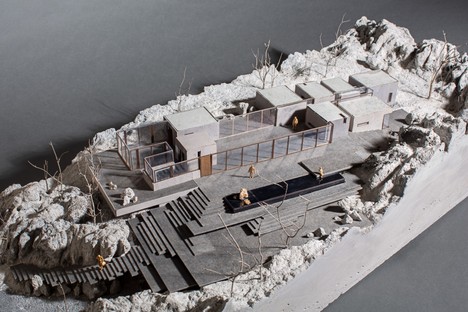 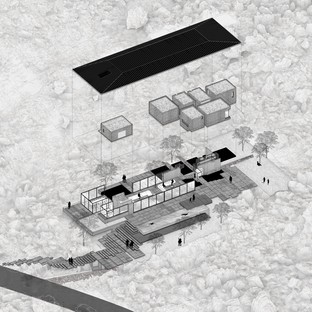 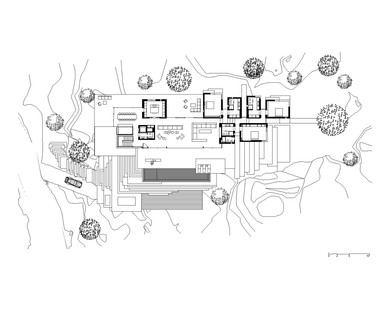 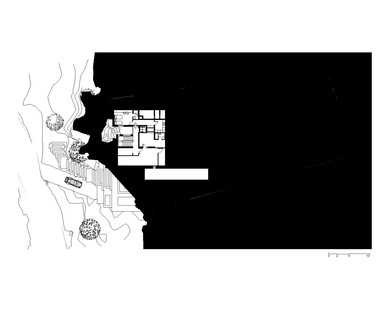 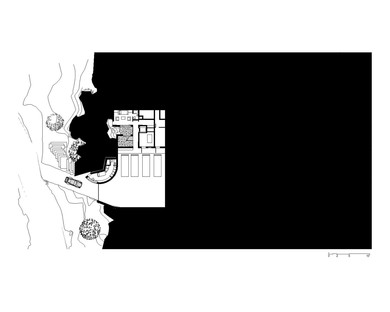 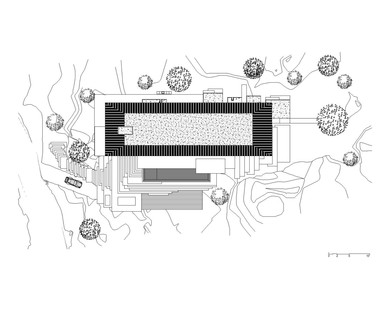 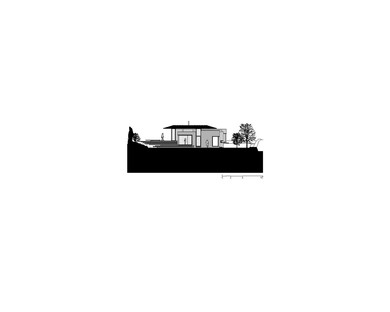 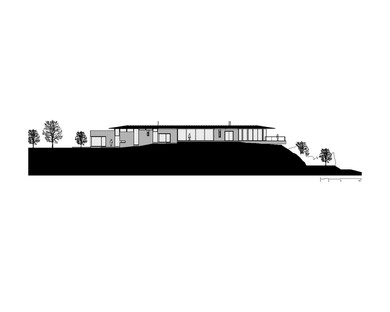 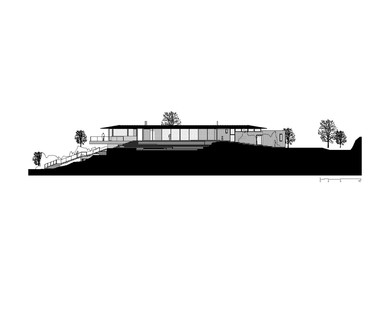 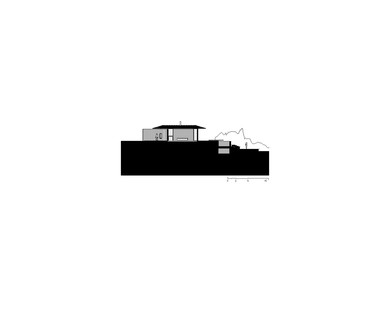 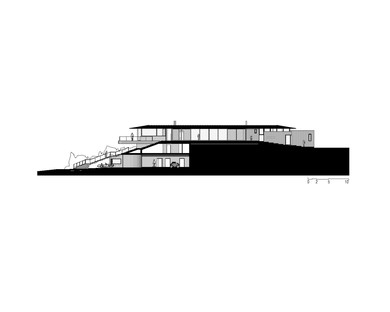 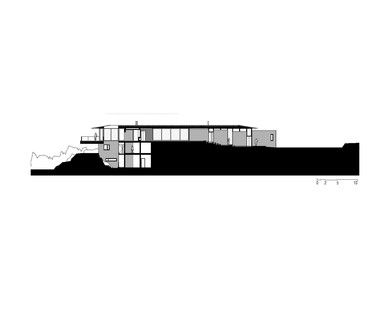