Karawitz designs the second home recognised by the Passivhaus Institut in France, in Bessancourt. The value of the acknowledgement lies in having completed a project which is exemplary not only in terms of comfort and environmental sustainability but also in its architectural composition. 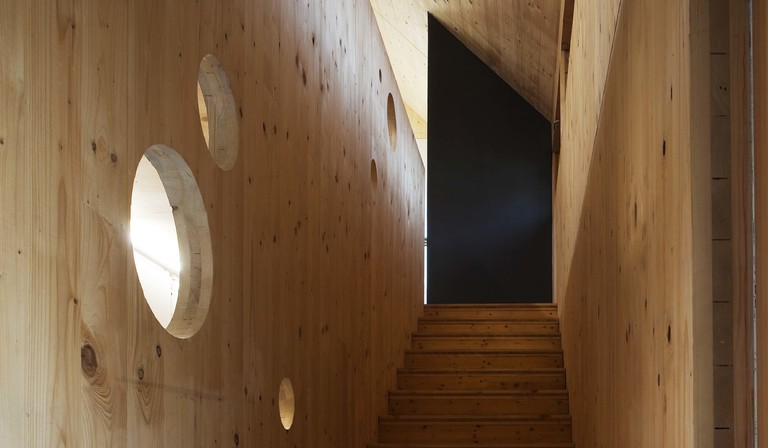 In Bessancourt, France, near the green Val d’Oise, Karawitz of Paris has designed an energy self-sufficient home qualified for “Passivhaus Institut” certification, attributed to only one other building in France so far. A “Passivhaus Institut” certified passive home cuts the amount of energy used for climate control by 90% over a traditional European home, 75% over the amount of energy required by most new buildings.
The philosophy of energy-saving architecture first emerged in northern Europe in the early 80s, but it was not until the end of the decade that the first steps toward the concept of “passive” architecture were taken thanks to a study by the University of Lund in Sweden. Since then much study has gone into methods of design and construction aimed at reducing buildings? energy requirements, while at the same time studies have been conducted into autonomous generation of environmental comfort for buildings? users.
In the Karawitz project the design of the archetypal farmhouse with a gabled roof, fitting perfectly with the traditional local homes, provides the basis for covering the walls and floor completely with a layer of bamboo to mitigate the effects of direct sunlight: the modular panels allow users to control the climate inside the home, cooling it down in hot weather and modifying its façade in an infinite number of variations created by the many different possibilities for opening and closing windows. The windows face south to make the most of sunlight in winter, but have triple glazing and argon gas to reduce thermal transmittance (U).
Photovoltaic panels are installed on the roof, while the building?s structure is made entirely out of solid wood beams with wood fibre insulation, into which installations can easily be fitted. The layout of the home reveals two parts separated by a “backbone”, a sequence of panels 60 cm wide set at a distance of 90 cm from one another, dividing the two functional areas in the home, a south-facing living area on the ground floor and bedrooms on the first floor, and a north-facing area for passageways and utilities. As a compositional and functional element, the backbone serves as a technical volume as well as a modular system, in some places open for passage, in others closed to provide wall closets, sometimes supporting mobile internal walls which can be used to divide space and adapt it to a variety of uses. On both the ground floor and the first floor, the depth of the main south-facing rooms is increased by the double boundary onto the garden, consisting of a glass wall and a frame supporting a bamboo sunshade, creating a small filter area which controls the temperature in the interior. 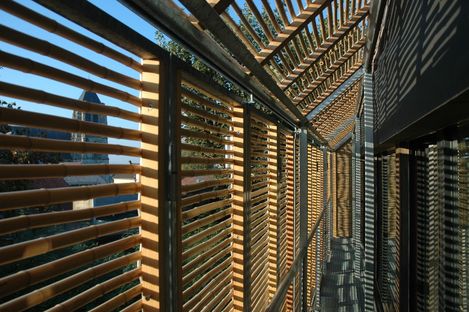 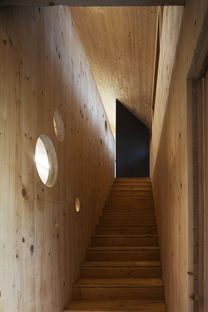 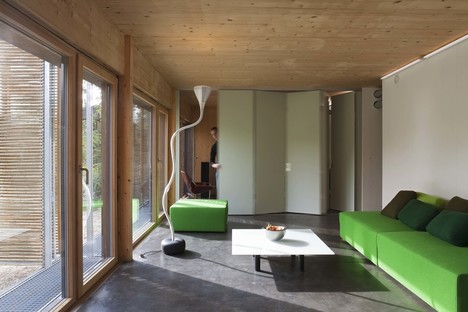 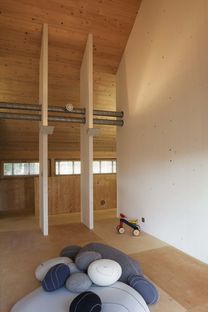 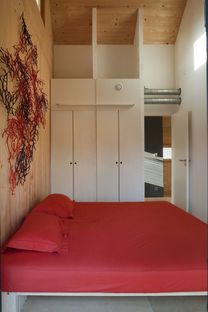 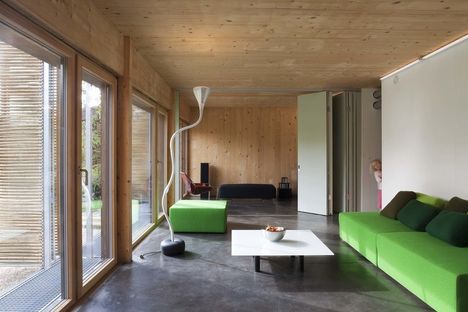 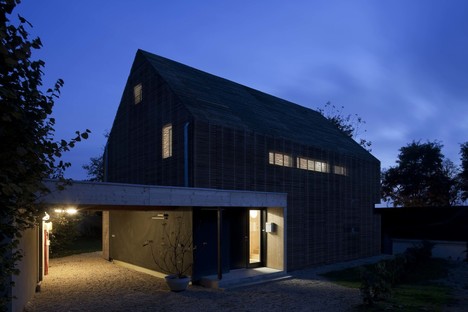 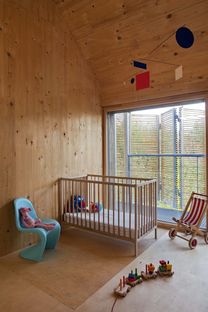 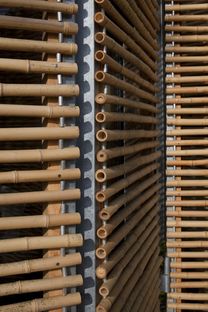