In the "Am Engelbach" Kindergarten in Lustenau, Austria, Innauer Matt Architekten has explored the full potential of wood, designing a community architecture capable of standing out as a true landmark in the neighbourhood, but equally of remaining a cosy and welcoming space for young children. 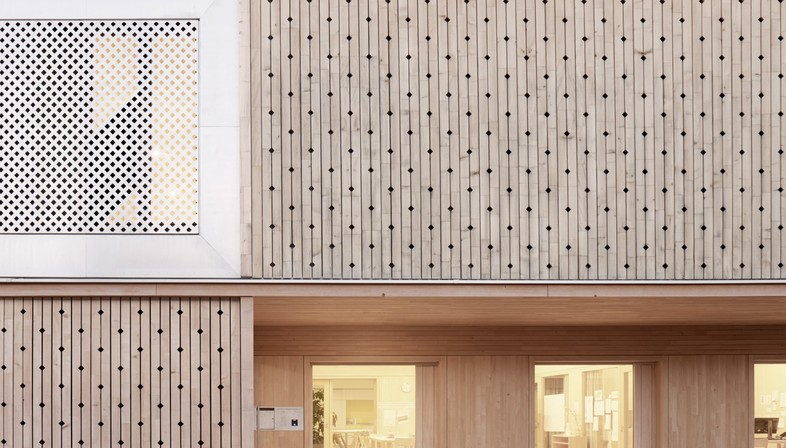 The “Am Engelbach” Kindergarten, recently built in Lustenau, Austria, is a design by Bezau-based firm Innauer Matt Architekten, commissioned by the town in a residential neighbourhood in the Hasenfeld district. Some have already dubbed it a home of sorts, thanks to its decorated façade, extensive use of wood and colour palette, all combining to create an intimate feel.
We are on the border between Austria and Switzerland, in an area in the south of the town with a motley mixture of single-family homes that have sprung up in a line along the Hasenfeldstrasse axis and along its side streets, which lead towards the Grindelkanal. The local government’s aim was to construct a kindergarten on the green plot of land bordered by the canal to the west, neighbouring the retirement home. This was intended to ensure that the area remained earmarked for public use and to keep it as parkland as much as possible.
Having won a public competition, Innauer Matt Architekten sensed in advance the kindergarten’s value as a pivotal building in a district which desperately needed new services. The firm has designed an architecture that recognises its status as a public building, and as such departs from the common image of the house with a pitched roof, but at the same time seeks to offer that same intimate, domestic atmosphere.
Limiting itself to a height of two storeys so as not to tower over the average-sized homes in the area, the new kindergarten is more of a horizontal volume, with a flat roof, its impact softened somewhat by the alternation of full and empty spaces. Set back slightly from Hasenfeldstrasse, it has a large green area to the east, towards the canal, which has been left empty as a public park.
As emphasised by the educators at the Montessori-inspired “Am Engelbach” kindergarten, preschool-aged children require clarity and perspective more than anything else. As such, the architects took these two key concepts as their inspiration for the design of the interior spaces and the rhythm of the façades for the new building.
The ground floor, where the main entrance on the street is located, is based on the centrality of a large gallery-like space that runs through the entire building, connecting the western façade to the eastern one and the interior with the park at the rear, thanks to the vast window. It is a flexible hybrid space made specifically to adapt to various children’s activities, also enhanced by the many colourful poufs dotted around which can be used for play or simply relaxation. The southeastern corner is home to the rooms dedicated to the first of the six classes, with its position allowing for excellent sun exposure. To the southwest, meanwhile, is an open-plan kitchen with dining room where all the children can enjoy their lunch together; this is open to the central gallery and can be divided up by way of a full-height curtain. The key elements of the building’s structure are the three staircases that lead up to the upper floor, allowing for easy access that is evenly distributed so as to prevent crowding when the children arrive, leave, or come down to the canteen for lunch. At the heart of the central gallery is an empty space which establishes a visual connection between the two floors, thus helping to create the desired clarity in reading the space, as mentioned previously.
The first and ground floors offer a constant alternation between functionally defined spaces and flexible ones, also marked out by the rhythmic succession of closed and transparent spaces, both outwards and inwards.
On the upper floor, the T-shaped corridors provide direct access to five classrooms, all of which have been arranged to be south-facing or east-facing, thus offering the rooms a pleasant influx of sunshine in the mornings. Each unit includes a gym, a communications area, toilet facilities and a kitchenette. They each also have a loggia intended to broaden the children’s visual horizons, offering them a view of the outside world and incorporating green space into their everyday panorama, even when the activities are taking place indoors. These terraces also allow for outdoor playtime, even when the weather is less than ideal.
As it has a slight overhang, the second floor serves to protect the walkway along the perimeter of the ground floor, also contributing to the variation in the façades that helps to break up and therefore soften the impact of the building. This effect also helps it to noticeably diverge from the characteristics of the residential volume, clearly marking it out as a public building. 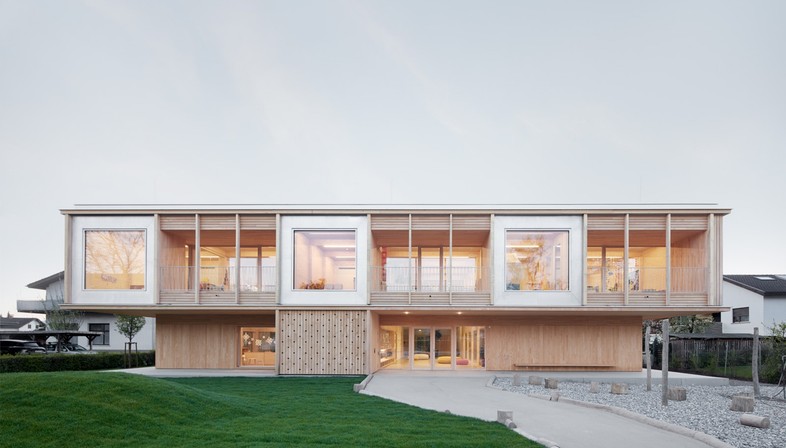 Innauer Matt Architekten have delved into an interesting line of research in terms of construction and materials, skilfully combined with the colour design by Monika Heiss. The building is a blend of wood and concrete that meets all current energy and sustainability requirements. The floor, stairwell and reinforcing walls on the ground floor are all made of reinforced concrete. The walls and ceilings use solid prefabricated elements made from wood sourced in the local region, thus completing the simple structure. The upper floor, meanwhile, is made entirely from prefabricated wooden components. The cladding is all made from fir and ash, whilst the façades have decorative white fir panels with small diamond motifs which create delicate and playful light effects.
In their alternation of glass and curtain walls with frames and patterned panels, the façades of the kindergarten suggest a fabric, a cloak, a curtain of sorts, conjuring up images of intimate worlds full of warmth and dedication. The same feeling has been echoed inside, where the natural wood walls are juxtaposed with polished concrete floors, slate-white plastered surfaces and ceilings decked out in grey wood wool. Worlds away, then, from the primary colours that are often the hallmark of facilities for children, instead favouring soft hues in continuity with each other, as in the case of the kitchen, where daffodil yellow has been paired with dark grey and pale pink. An influx of natural light gradually filters through to the central corridors thanks to the sheer size of the windows and the gap between the floors, giving the space a uniform appearance free of any dimly-lit areas.
The mayor of Lustenau used interesting terms to describe the building, which he called a refuge but, at the same time, a stage for the children who will use it. The project has successfully managed to convey a certain domestic feel whilst also offering the kindergarteners an array of stimuli to help them discover the world around them. 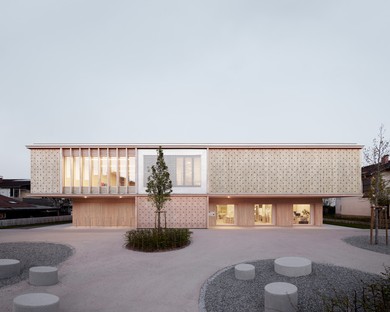 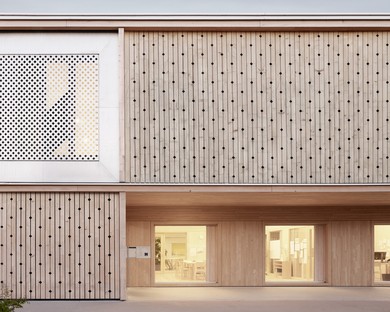 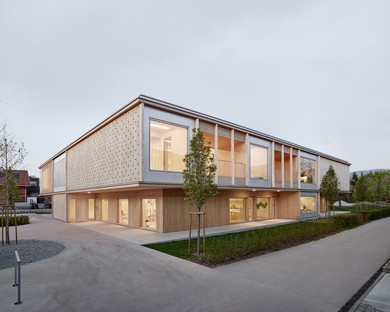 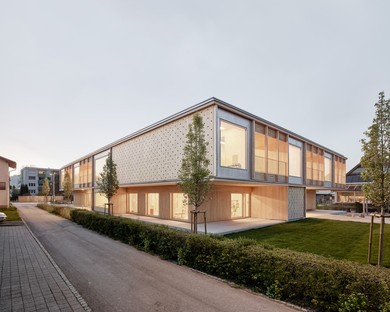 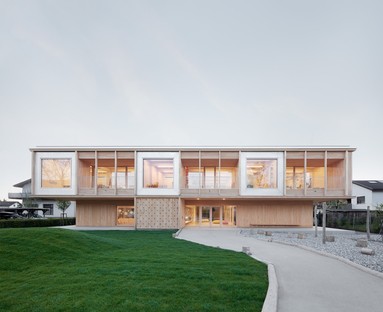 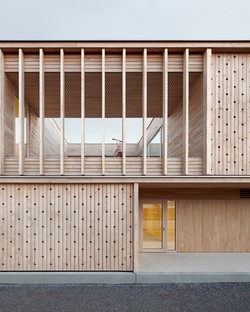 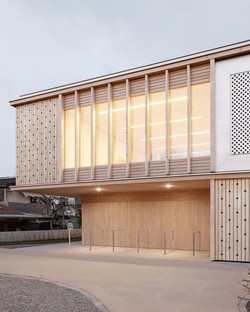 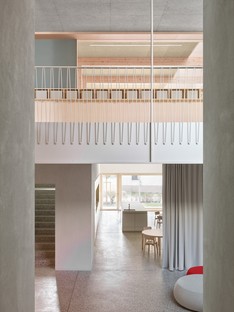 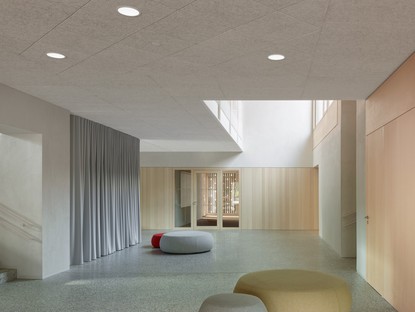 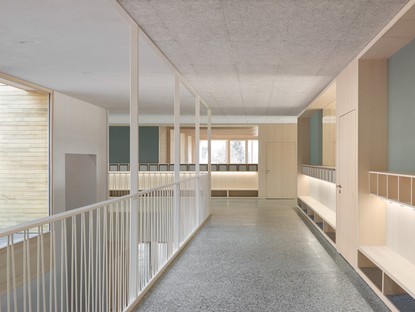 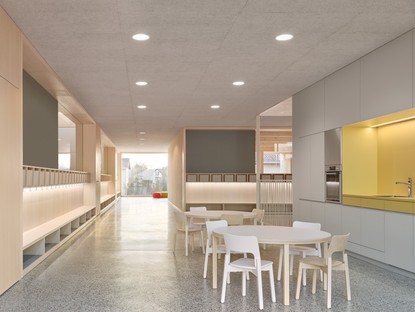 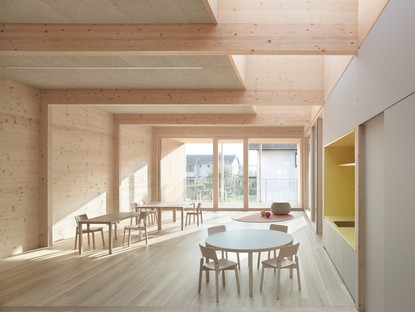 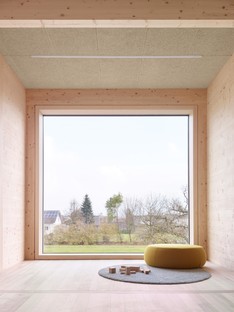 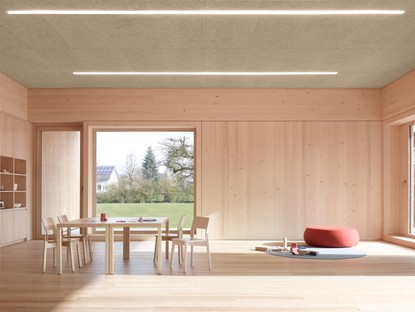 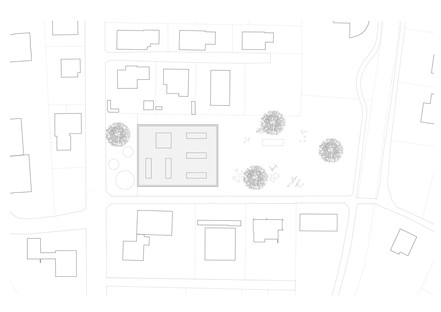 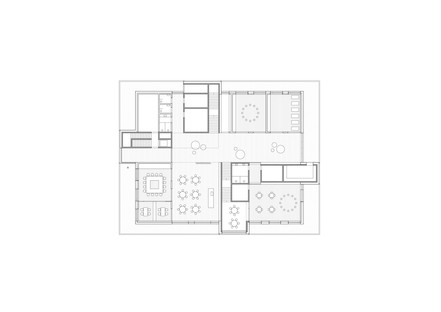 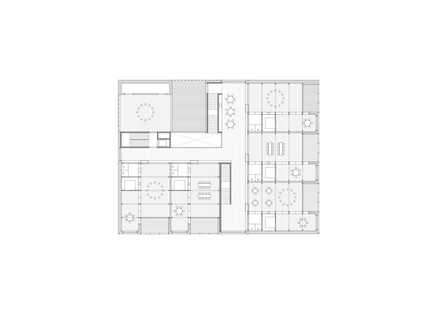 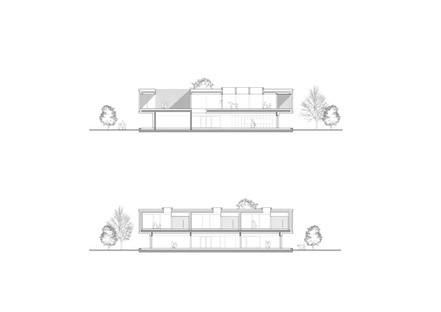 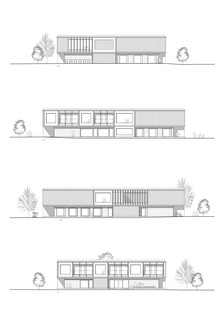