Hercule, a single-family home designed by 2001

Architectural studio 2001 designed a single-family home that rises out of the earth like a monolith, named after John Grün, a local man nicknamed Herkul who was considered the strongest man in the world in the late 19th century. 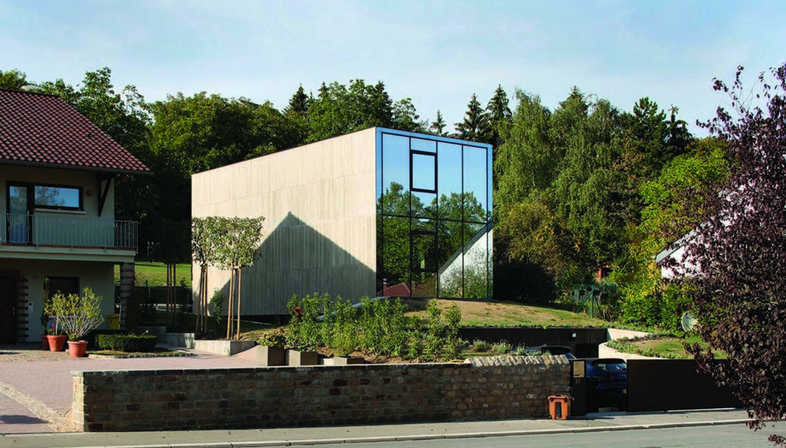 The name “Hercule” given by architects Philippe Nathan and Sergio Carvalho of Luxembourg studio 2001 to the single-family home designed in Mondorf-les-bains, Luxembourg, pays homage to John Grün, also known as Herkul Grün, a well-known Luxembourg circus artist born in Mondorf-les-bains who was believed to be the strongest man in the world in the late 19th and early 20th century. Hercule, because the concrete single-family home looks like a powerful monolith or an iceberg emerging out of the ground. 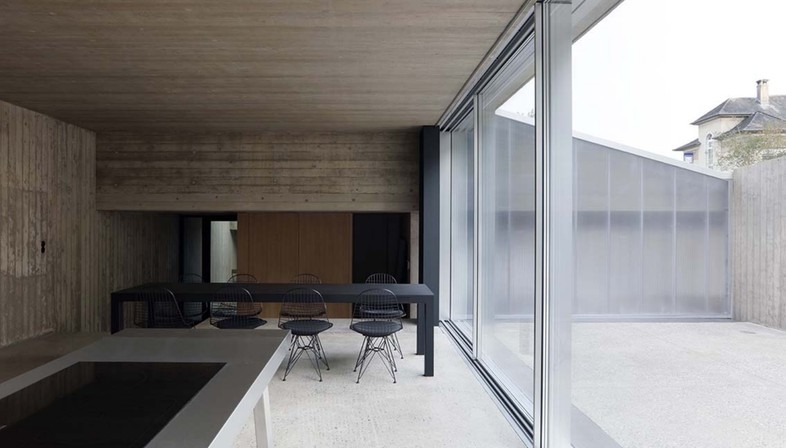 The architects’ own definition of the house as an “iceberg” is a reference to the fact that only a small part of the new building is visible, like the tip of an iceberg. The architects let themselves be inspired by the features of the land, a free space located between an old farmhouse and a suburban villa. They took advantage of the slope of the land to decrease the construction’s visual impact and construct an entire level underground, which is however on the same level as the street. As in an iceberg, the majority of which is below the level of the water, the underground level containing the living area is larger than the above-ground volume. On the southern side, the architects designed a wall of floor-to-ceiling glass that opens up completely, doubling the amount of space available.
In this project of sparing design and well-proportioned spaces, the architects pay great attention to spatial ratios and the scale of the doors and windows. They have made radical, sometimes austere choices, such as the absence of finishes and the decision to emphasise the volumes through the use of formworks and polished surfaces. The intention is to get down to the true essence of design, the intrinsic quality of spaces. The interiors are minimal, and the architects seek to achieve timeless quality and architecture which the inhabitants can appropriate at any time in their daily lives. The relationship with the world outside plays a key role in the project, and the minimal quality of the interiors puts the emphasis on the world outside. 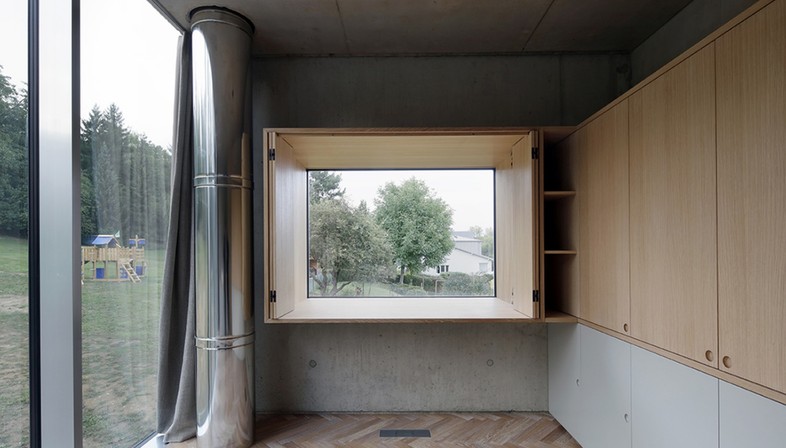 The architects make use of the home’s natural surroundings in determining the distribution of functions on the home’s three different levels. The basement level includes, in addition to the living area, organised in a single 14 x 6 metre space which opens onto the patio outside, the home’s utility areas (laundry room, fitness room, kitchen, cellar) as well as the entrance hall and the garage. The bedrooms and bathrooms on the upper levels are contained in the compact, essential volume visible from street level. The architects differentiated the approaches to the space around the home by creating different façades. Bare concrete on the southern side, which serves as girder for the completely open lower level and then becomes a wall on the upper levels. The northern wall is open to the garden on the upper levels, framing the landscape and offering panoramic views through mobile windows specially designed by the architects. The east and west walls, facing the street and the back garden, respectively, are continuous façades with protective glass reflecting the home’s suburban surroundings and the landscape around them. 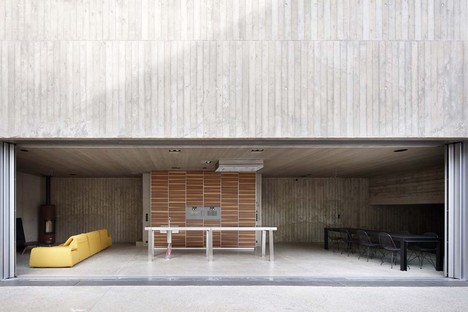 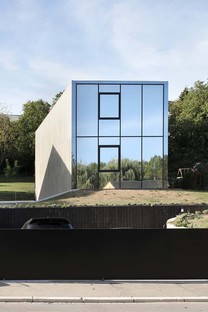 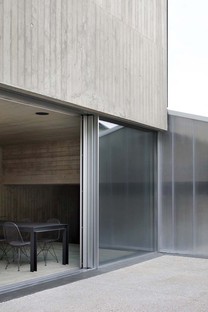 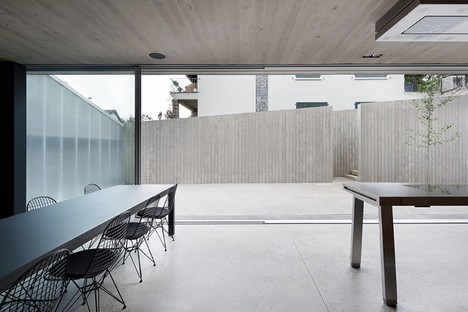 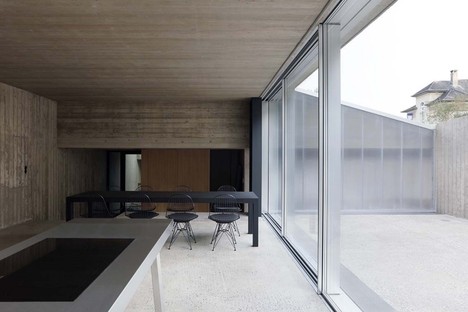 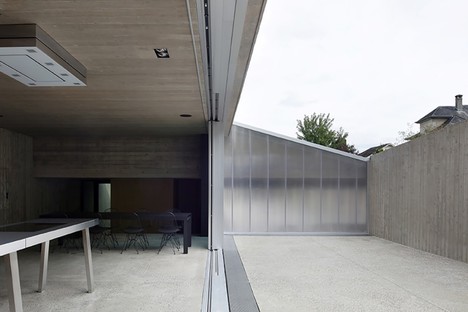 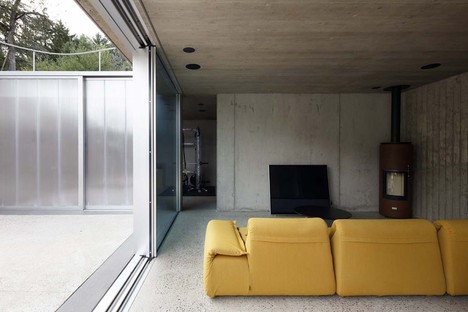 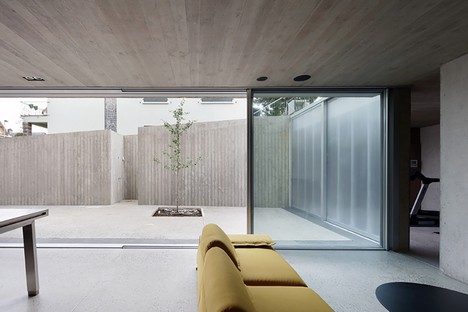 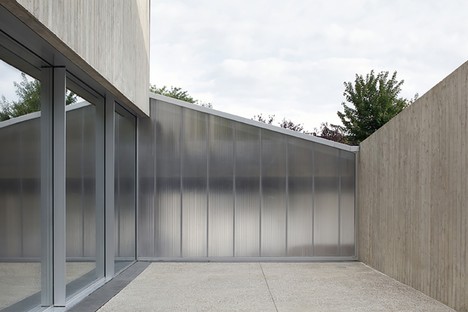 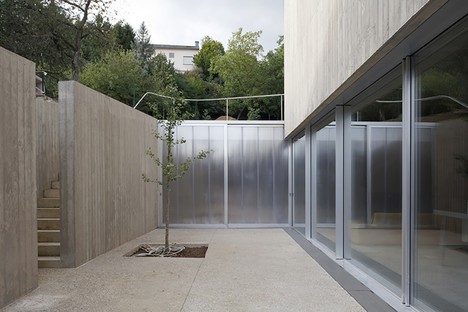 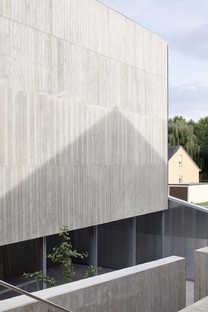 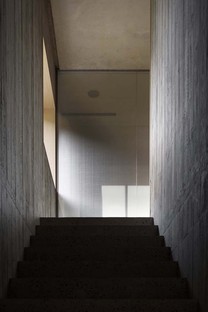 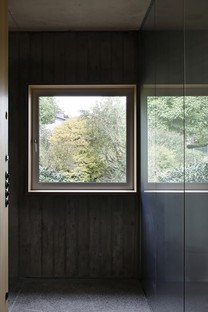 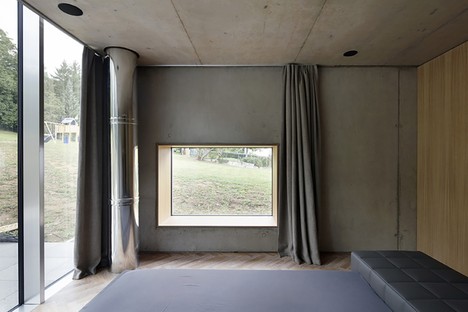 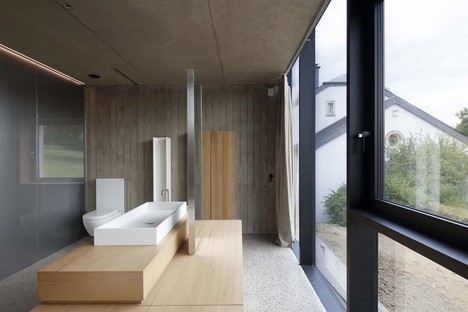 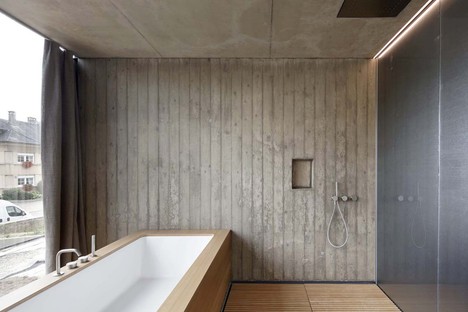 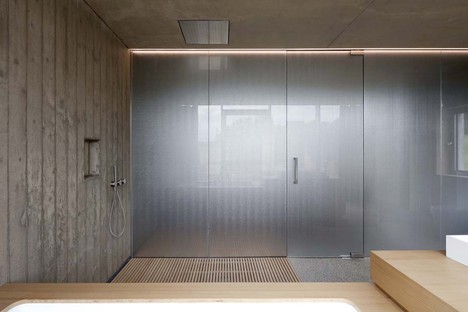