The town of Marcq-en-Baroeul, in Hauts-de-France, has a new cultural centre and meeting-place integrated into its urban context. The building by Hart Berteloot Atelier Architecture Territoire and V plus pays tribute to local history and to great legends of the cinema. 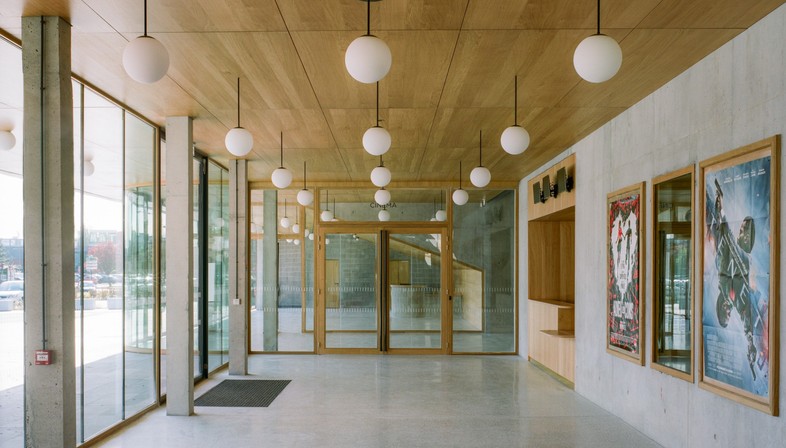 Hart Berteloot Atelier Architecture Territoire (HBAAT) of Lille and V plus of Brussels won the 2017 competition and were commissioned by the town of Marcq-en-Baroeul, in Hauts-de-France, to design a new cinema in Place Doumer.
The municipality wanted a building exemplifying a modern cultural system for Marcq-en-Baroeul, in which the arts come together to revitalise the social fabric of this neighbourhood at the gateway to the town. The new space is to contain three cinemas (with 80, 120 and 300 seats), a party room for up to 700 people, a café-brasserie and rehearsal rooms for the local music school.
Cinema not just as an individual experience but, returning to its roots, as a performance to participate in and share: this is the concept underlying the “Le Pont des Arts” project, built in 2021 on the former site of a multi-purpose hall. Facing onto a square with a strong commercial vocation, with a central parking lot that also hosts the local market, the Doumer hall imitated the red brick walls typical of the architecture of Lille and Marcq-en-Baroeul, but without any particular prestige. The single-level building was set back from the square, with a gate restricting access. All around it were two-storey apartment buildings and shops, overlooking what was in effect a big parking lot, without any real centre or differentiation of traffic routes.
“Le Pont des Arts” cultural centre demonstrates respect for its urban surroundings and provides the town with a new landmark, orienting routes in the area. The basic concept is inspired by HBAAT and V+’s reflection on the limitations of today’s cinema buildings, which are built from the inside out to allocate multiplex technical facilities that are formally inexpressive and make their suburban surroundings even worse than they were before. They analysed the history of Art Deco cinemas, such as the Colisée Lumière in Rue Montgolfier, not far from Place Doumer, and surveyed the masonry and brick decorations typical of the architectural lexicon of the town of Marcq-en-Baroeul. The project interprets all these influences and brings back bare handmade brick cladding, with straight and curved elements embracing all kinds of shapes to establish a superior unity. The building’s pale colour ensures the consistency of its external cladding and concrete interiors.
The architecture of the new cultural centre does not seek verticality or impose itself as a monument, but its main façade advances to achieve alignment with the shopfronts on the square, completing the walking route through the town. The project establishes an initial scale of relationship with passers-by with an all-glass base inspired by Art Deco cinemas, opening up views into the foyer, bar-brasserie and entrance area, where curved windows form a recessed entrance area. 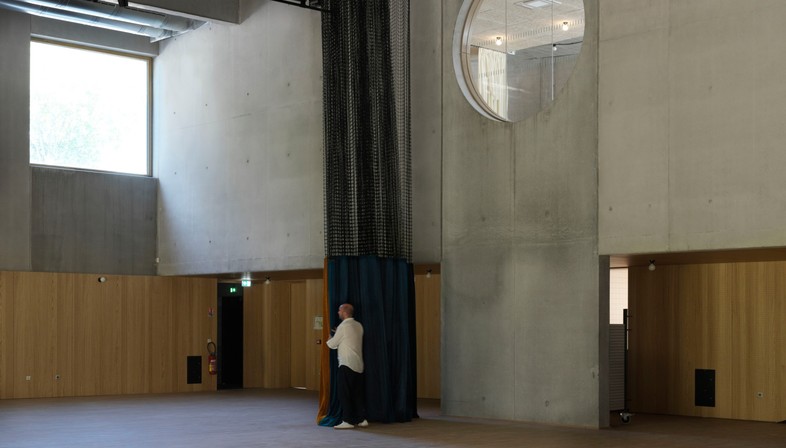 The atmosphere of expectation prior to the show begins on this walkway, from which patrons can already glimpse the cinema’s refined but modern interiors.
While the foyer seems to reach out toward the square and the city, the screening rooms, party room and music school remain in the background but rise taller, establishing a relationship on a second scale, that of architecture and the neighbourhood. The three nuclei in the programme are split among three volumes arranged around a large empty space, the terrace above the foyer. To the west is the 300 seat screening hall, with the two smaller halls positioned one above the other in the middle, while the volume to the east contains the music school, extending out toward the city, and the party hall opening onto the garden behind the building.
The blocks thus formed do not constitute a closed curtain of buildings, but a multiple, fragmented landscape. Between them are broad new internal walkways on two levels, cutting the building in half cross-wise and opening up the view beyond. The dramatic windows of the foyer attract the attention of people in the square, drawing the eye through to the back garden. The big staircase that becomes the centre of attention affords access to the screening rooms and to what the architects call the fourth hall, a rooftop terrace for outdoor screenings, parties and little concerts. Their intention is to involve the entire square in the events taking place at “Le Pont des Arts”, acting as an echo chamber. The interior decorating combines wood with glass and concrete. Paying tribute to the textiles industry of Lille, Roubaix and Tourcoing, big tapestries digitally produced by a local company illustrate scenes from French art films, in place of film posters. Carefully curated on all scales, from the urban scale down to the design of the furniture and lighting, the project is dramatic when seen from the square by day, while in the evening it frames the crowds of cinema-goers waiting for the show to start, with all the charisma of an urban living room. 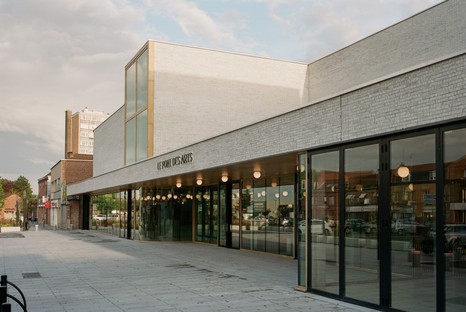 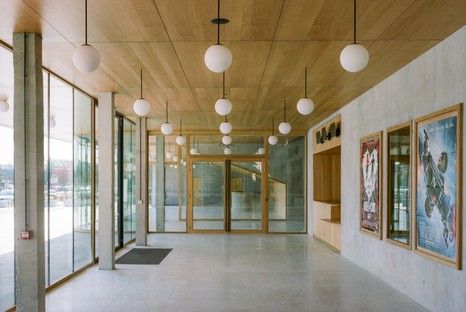 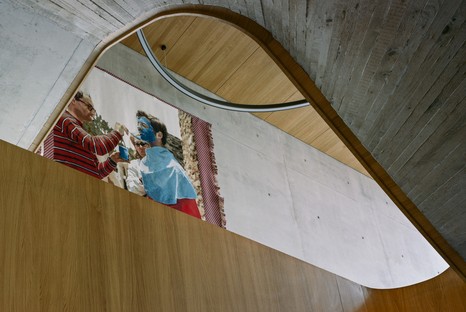 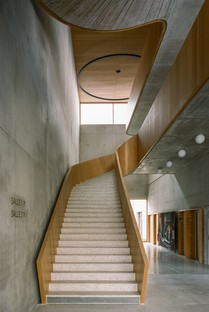 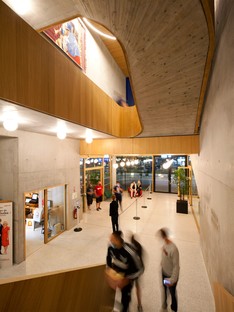 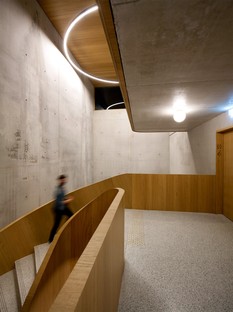 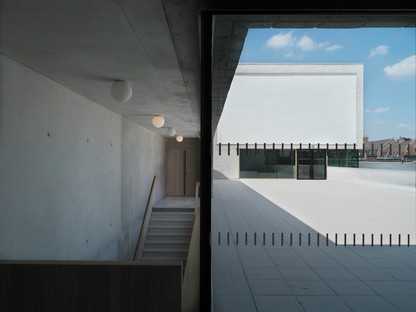 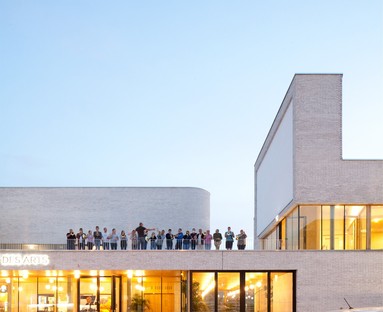 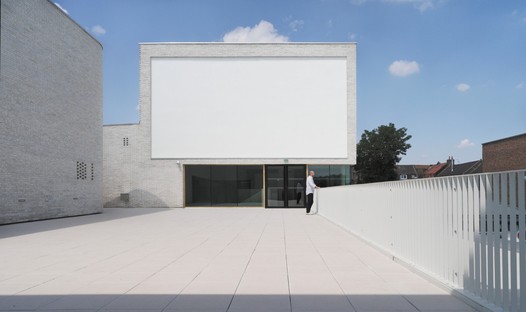 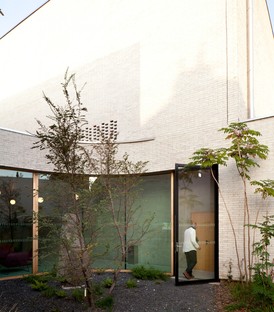 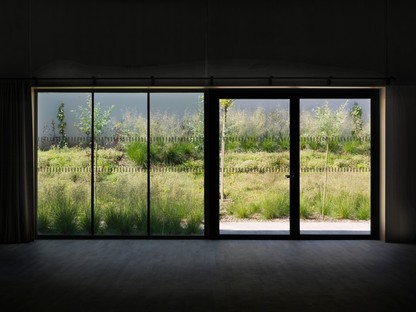 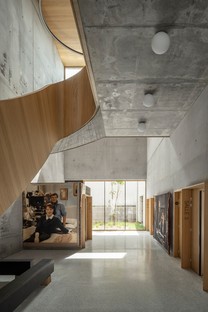 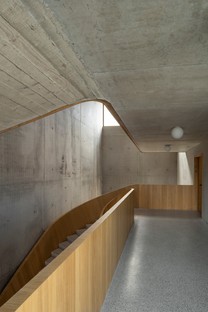 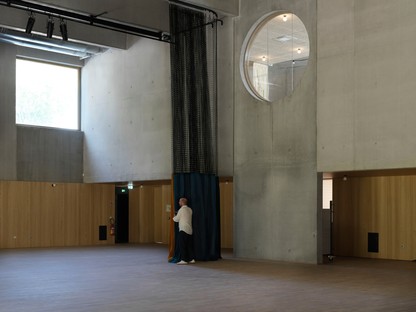 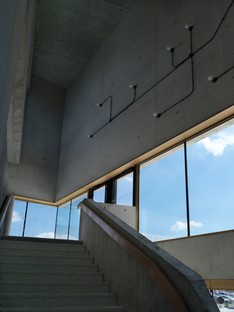 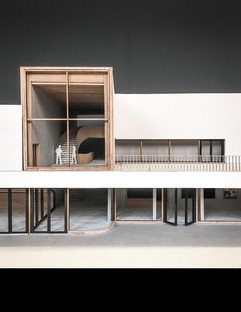 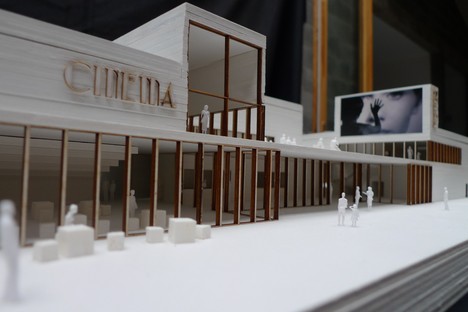 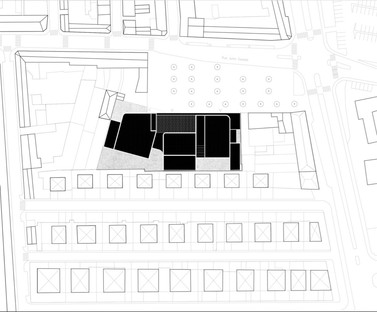 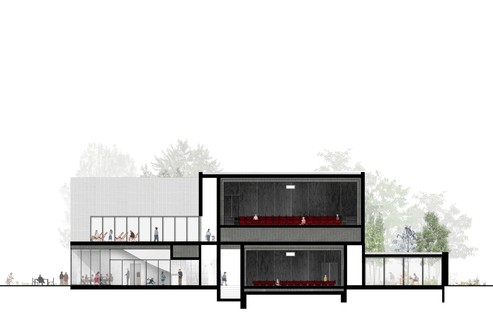