Architect Giovanni Vaccarini has revisited the theme of the Adriatic "palazzina" (apartment building) for Riviera 107, an elegant residential development built on the seafront of the city of Pescara. The short film The Living Section, produced by The Piranesi Experience and directed by Fabio Paolucci, was recently presented, featuring architect Giovanni Vaccarini himself leading the viewer to discover his project.

Riviera 107, the new building designed by architect Giovanni Vaccarini for Pescara's seafront, is not a mere residential project. Taking the revival of the Adriatic apartment building as his starting point, the architect has created an urban regeneration project that he describes as "a piece of the widespread conurbation of the Adriatic coast" and that also evokes the “trabocco”, the “fishing machine” typical of the Abruzzo coastline.
The area involved is in a part of the city where the effects of its rapid urban growth, which began with the reconstruction after the bombings of World War II, which had destroyed much of the city centre, are evident. The landscape is characterised by neoclassically-inspired Art Nouveau villas that coexist with imposing multi-storey buildings without any remarkable qualities. Over time, as in the case of Riviera 107, some villas have been replaced by 'palazzine' (apartment buildigs) with two or more apartments on each floor and vertical connections in the middle. This is a typology that the architect Giovanni Vaccarini defines as a hybrid representative of the transformations that have occurred in the city and which, in Riviera 107, he tackles by introducing a new distribution logic by functional bands.
The building was designed and constructed in class A+ according to principles of bio-architecture and eco-compatibility, and respects the geometric shape of the plot and its boundaries, seamlessly blending into the urban fabric and establishing new relationships between the interior, public space and landscape. The architect has not only intervened in the functional distribution of the apartment, but also set back the front of the building from the street line to create a mediating space between the city and private living spaces.

The east façade is conceived as an open section where the floors slope outwards and emerge with overhangs of different widths that become true open-air rooms. This design solution aims to bring the landscape into architecture, and is well illustrated by the images of the short film The Living Section, produced by The Piranesi Experience and directed by Fabio Paolucci. Through the overhangs, the public areas of the house benefit from a direct and intense relationship with the sea view. On the outside, on the other hand, for those walking along the promenade, they create an unprecedented façade of the building, as the brass cladding of their soffit reflects the surrounding urban scene and the life that enlivens it. 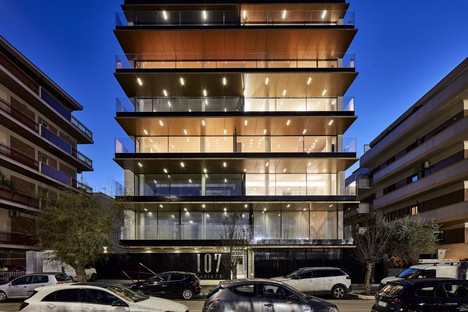 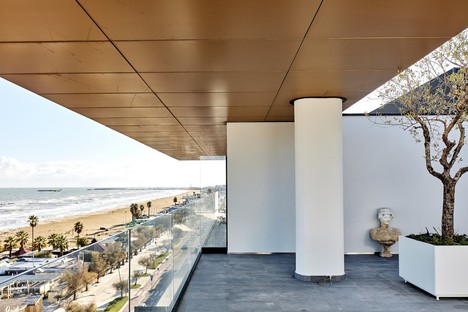 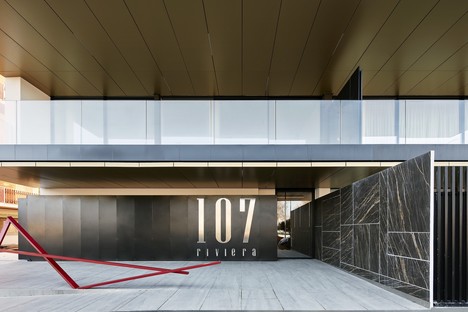 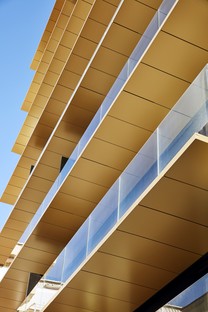 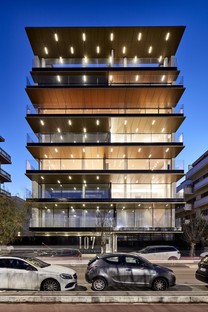