Sberbank, Russia’s biggest bank, has transformed its office model to make it more open, flexible and transparent. This marks a change in the company’s business culture that is reflected in the organisation of the workspaces of many big companies, the most commonly cited of which is the legendary Google.

Swiss architectural studio Evolution Design was responsible for the implementation of this new concept for the Moscow offices in a four-storey building in the city centre. Their design won the Grand Prix Award 2018 for best office. 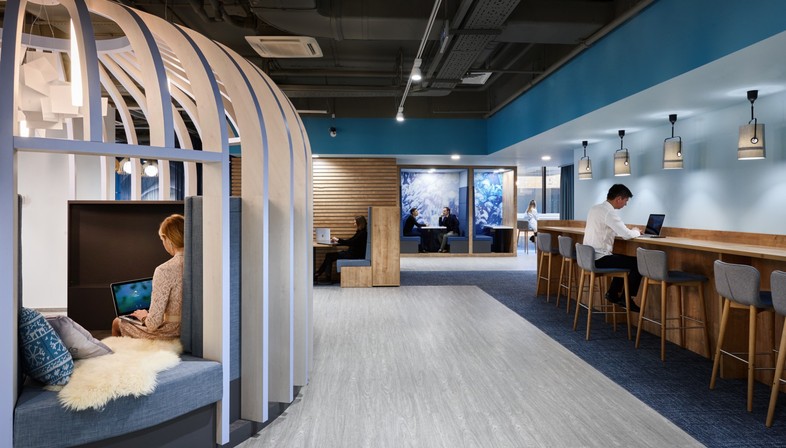 Sberbank needs flexible workspaces because its method involves creation of multidisciplinary teams which are different for every project, without a strong internal hierarchy. This is why there are working units of different sizes and types in the building, from meeting rooms of various sizes to a library where people can work alone in silence, open spaces and lounges for casual discussions. 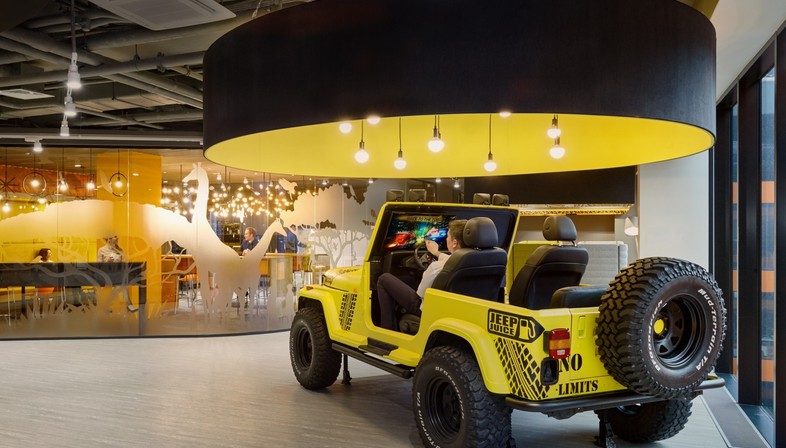 It was not easy to design the flows of use and mobility between different areas and make sure they were truly functional. The building totals 7500 square metres on four floors, with about 650 people working on each floor. Each floor is divided into four main areas which share a hub in the central part of the floor containing a multi-purpose hall, a bookshelf, two kitchens and a number of lounge areas. The recreational areas feature billiard and ping-pong tables, table soccer games, and even a full-scale model of a Jeep in which the windshield has been replaced by a video game.
The outside part of each floor contains the actual workstations, located by the windows to make optimal use of daylight. To reduce distraction due to employees talking and walking about, Evolution Design came up with a solution it calls a room in a room, providing a buffer zone separating the workspaces from the circulation and leisure areas. The architects further reduced noise levels with a series of little individual rooms for working and telephoning, as well as rapid brainstorming and informal meetings.
The work areas also include co-working spaces with blackboards on which to write down ideas during meetings, ergonomic chairs designed for conversation, and bar counters along the façades with panoramic views of Moscow for anyone who wants to stop and look. Each floor features an unusual interactive design object, such as the Jeep fitted with a PlayStation or a modern version of a yurt decorated like a mountain chalet.
The colours of the various zones were chosen with care to allow users to find their way about the different areas and floors easily and intuitively, using different hues of the same colour on the floors, walls and furnishings to make mobility practically instinctive. 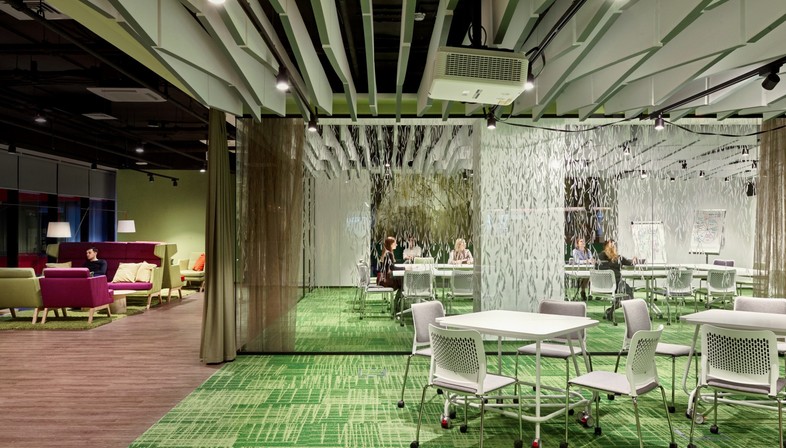 The key to the excellent results achieved is, according to the architects of Evolution Design, the adoption of working principles that reduce the vertical hierarchy to a minimum in favour of multidisciplinary teams that work more effectively on projects. These principles may be found in every part of the architectural identity Evolution Design artfully designed for Sberbank, creating a stimulating, welcoming environment for employees. 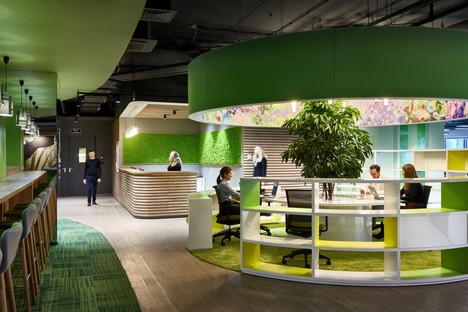 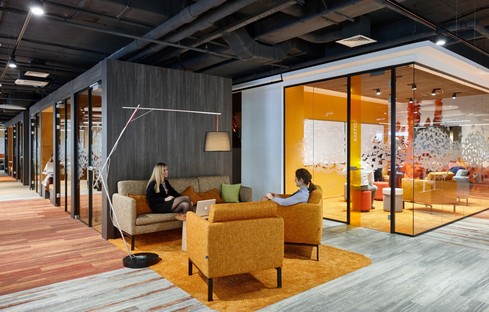 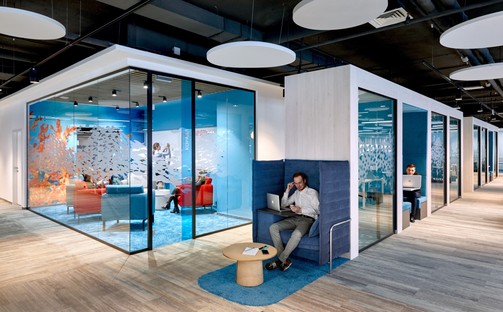 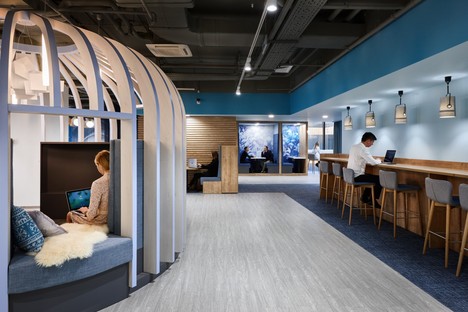 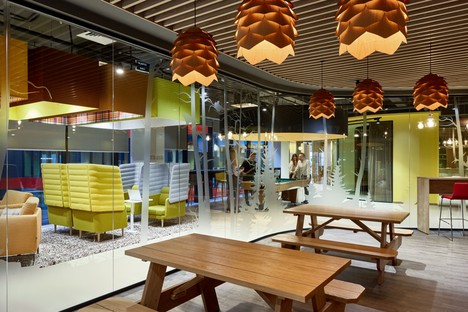 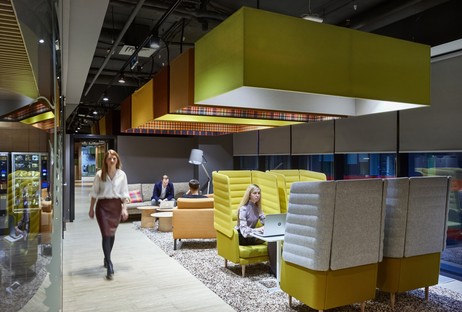 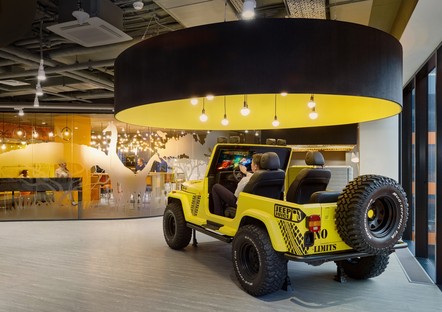 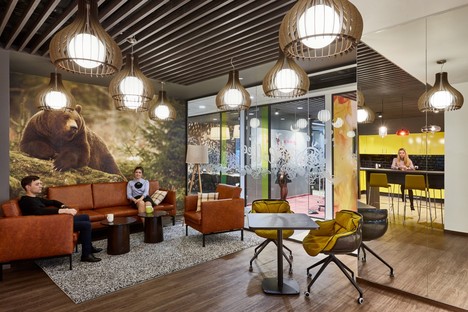 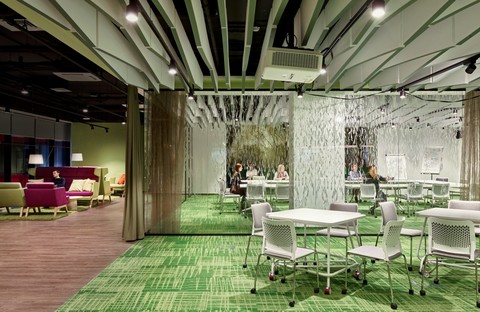 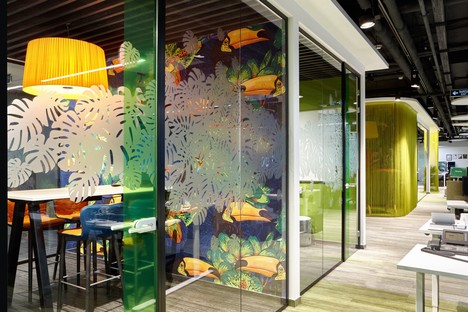 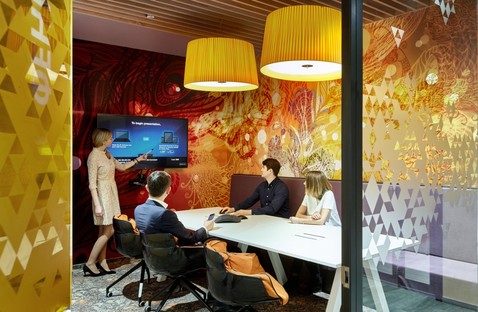 SAOTA Silver Pine, a house in a pine grove in Moscow