The Ilulissat Icefjord Centre, designed by the studio of architect Dorte Mandrup, fits harmoniously into the harsh but beautiful Arctic landscape. Surrounded by ice and snow for most of the year, the building is located on the edge of a UNESCO World Heritage Site, and allows visitors to see the dramatic consequences of climate change for themselves. 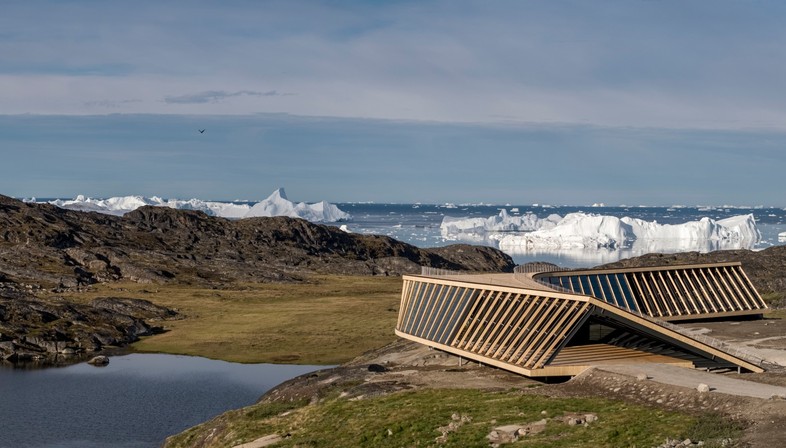 "A snowy owl’s flight through the landscape" is the poetic metaphor architect Dorte Mandrup uses to describe the Ilulissat Icefjord Centre, completed recently on the west coast of Greenland, 250 km north of the Artic Circle.
Overlooking the icy Kangia fjord, surrounded by ice and snow for most of the year, the centre is located near the village of Ilulissat, after which it is named, and the ancient glacier known as Sermeq Kujalleq. It is not only a visitor centre for tourists and climate researchers but a meeting-place for local residents, companies and politicians in an area that has been under study for more than 250 years: the information available to us today on glaciology and our understanding of the current changes to the climate are based on research conducted on the ancient glacier of Sermeq Kujalleq.
The centre can house exhibitions and, in addition to facilities for research and education, it also contains a cinema, a café and a shop. Built on the edge of a UNESCO World Heritage Site, its privileged position in the impressive but delicate glacial landscape allows visitors to witness the dramatic consequences of climate change firsthand.

Architect Dorte Mandrup’s comparison with the snowy owl, an Artic species, is an allusion to the building’s light, aerodynamic structure, like that of the wing of a bird of prey, stretched out to cut silently through the air, just as the building appears to levitate over the magnificent but rugged Artic territory to which it belongs.
The form of the architecture is modelled on the basis of its natural setting, like the remains of an animal discovered in the ice. The shape of the roof becomes a natural extension of the hiking paths in the area, offering a new viewpoint over the landscape around it. The gently curving floor plan of the Ilulissat Icefjord Centre recalls the shape of a boomerang, while its volume recalls a tent, made up of 50 triangular steel frames with a space which is open but covered at both ends. The centre becomes a public space, like an entrance to the village and territory of Ilulissat. Its aerodynamic shape, thanks to its steeply sloped sides, offers a safe shelter from the gelid wind and snow of the Artic to allow researchers and tourists to enjoy the view over the Kangia fjord, source of 10% of Greenland’s icebergs. When the snow melts in the spring, the water can flow right under the building, following its original route into Lake Sermermiut.
JAC Studios designed the permanent exhibition at the centre, with cases displaying archaeological findings from the ice consisting of prisms of blown glass made on the basis of real blocks of ice collected from Kangia fjord and scanned in 3D. In the centre of the exhibition are real ice cores telling the story of humanity and the climate since 124,000 B.C., revealing the first traces of pollution dating back to the days of the industrial revolution in Britain. 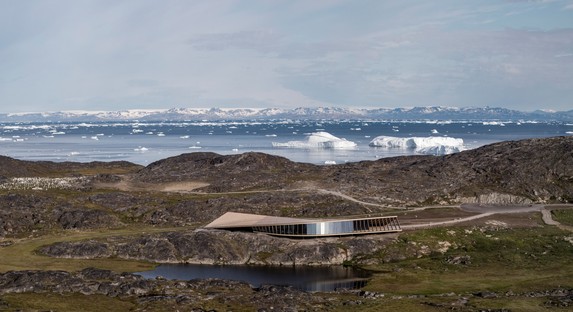 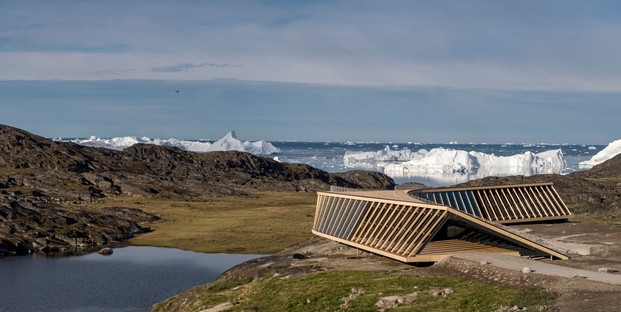 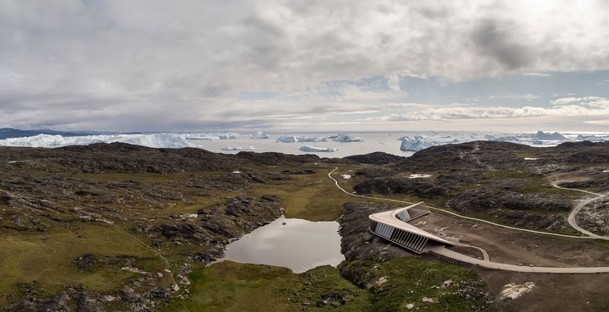 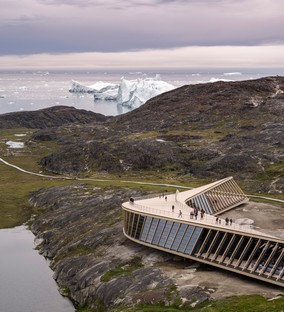 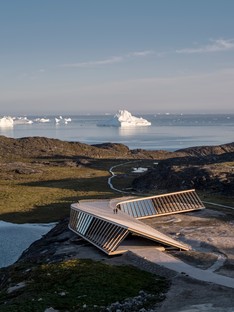