20 years after the inauguration of the research room, Bibliothèque nationale de France presents an exhibition telling the complete story of the genesis of an emblematic contemporary architecture project designed by Dominique Perrault. 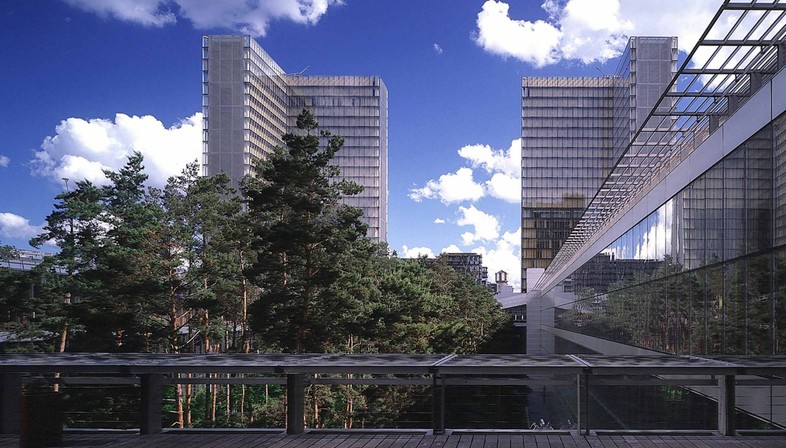 “Un lieu et non un bâtiment” (a place rather than a building): this is how the story of the Bibliothèque nationale de France (BnF) begins. An important project, now a monument, awarded about thirty years ago to a young and practically unknown 36 year-old architect, Dominique Perrault, winner of the international competition.
The exhibition inaugurated on April 9 reviews its entire history, with drawings, photographs, models, and audio and video contributions, but it is above all the architecture itself that is on display, for the exhibition takes place right inside the library. Container and content coincide, and the installation designed by Dominique Perrault and Gaëlle Lauriot-Prévost underlines this by creating a free exhibition route that plays with light while permitting a reading of the architectural elements and space of the BnF. 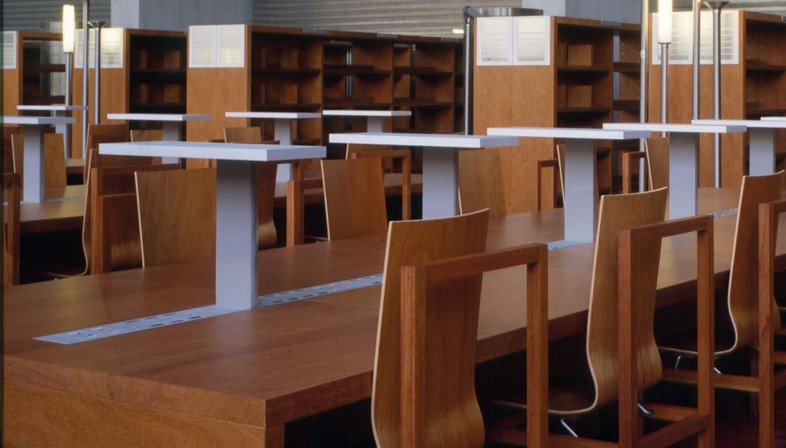 This year marks a double anniversary for BnF, For twenty years ago, in 1998, the rooms reserved for researchers were inaugurated, and thirty years ago, in 1988, the adventures of this important French monument began as the bureaucratic machine got going and the site was identified: an industrial area on the Seine in the 13th arrondissement of Paris. The choice of the site represented a new development in the large-scale projects begun in the French capital under the presidency of François Mitterand, as the community shifted its attention away from the historic city centre where projects such as the Louvre Pyramid had been built to the suburbs, reclaiming and developing an abandoned former industrial site for the first time. What might have seemed to be an unusual choice became a perspective vision representing the beginning of a series of urban policies for the development of the entire district, with the laying of a new section of the metro line to serve the area, inaugurated in 1998, three years after the library.
The project also introduces a new attitude to nature, perceived as a sacred, untouchable element; Dominique Perrault designed a big, luxuriant garden, a true forest, right in the middle of the library. Four corner towers with an L-shaped layout open towards the middle, like big open books, surround the big open space in the centre, a plaza measuring 400 m long ten metres below the level of the Seine. The architect emphasises how, without giving up the monumentality of the Library, the project reinterprets the typical layout of a monastery cloister, evoking its timeless atmosphere and silence. 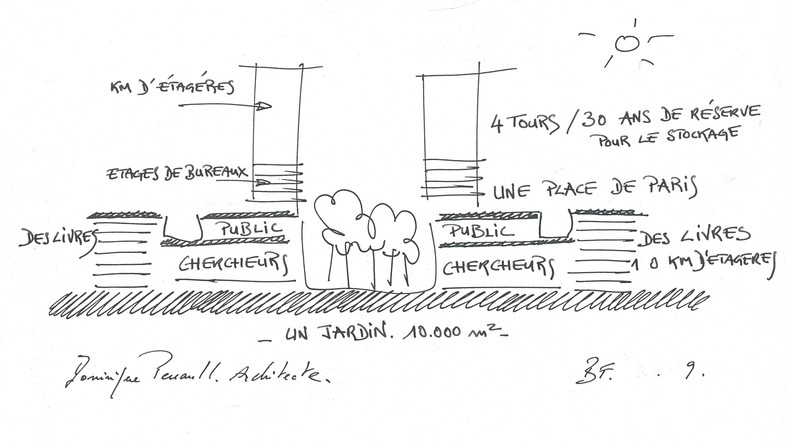 The exhibition installation designed by Dominique Perrault and Gaëlle Lauriot-Prévost with Frédéric Migayrou, the exhibition’s scientific curator, guides visitors through a free exhibition route created using a number of the architectural elements and furnishings of the BnF.
The architects used an emblematic material for the BnF evoking the site’s industrial history: a metal grid made of aluminium, though the one used in the building is actually made of stainless steel. 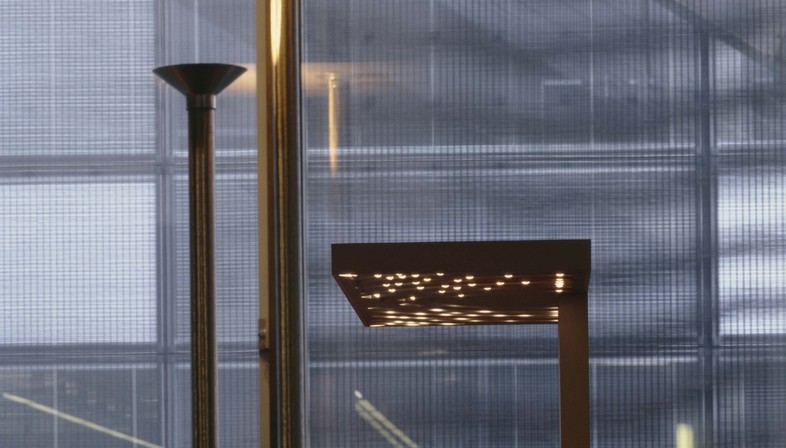 The grid, suspended from the architectural structure, forms four exhibition spaces corresponding to the four themes of the show. The metallic elements create effects of light and shadow, do not form a clear boundary, and allow the architectural space to be read in the room. Seating is freely arranged around the room, in two versions, made entirely of wood and of wood and metal, inviting visitors to stop at certain points to view video contributions. 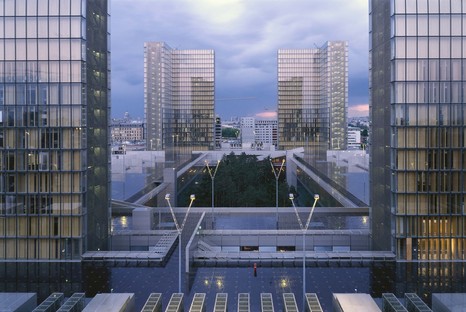 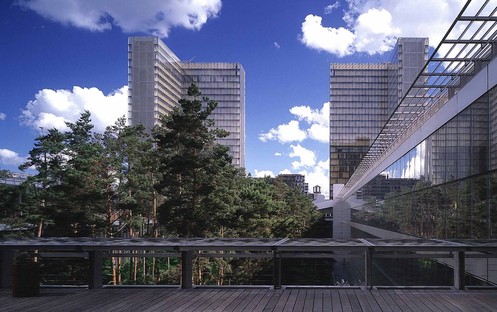 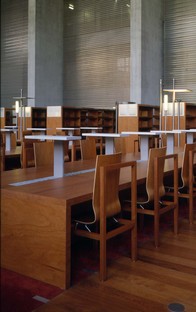 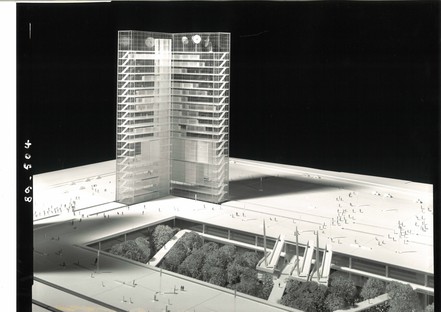 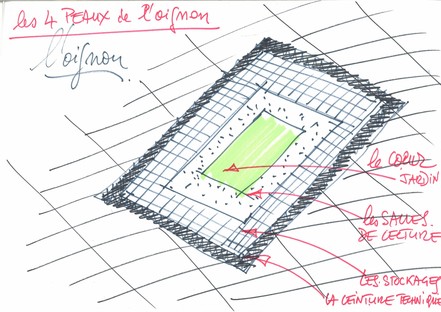 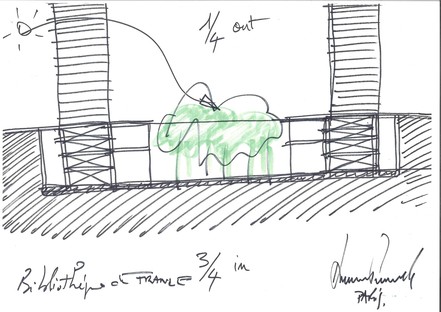 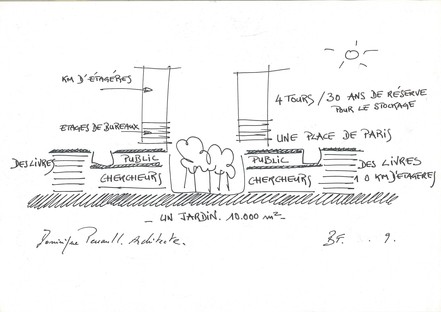 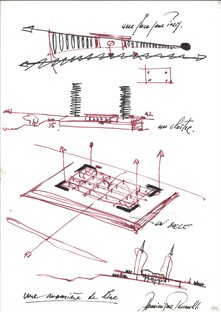 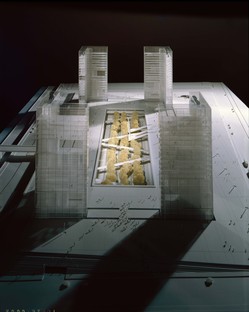 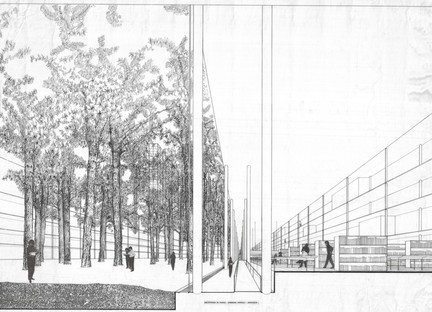 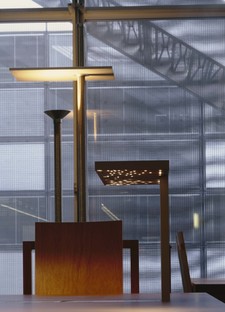 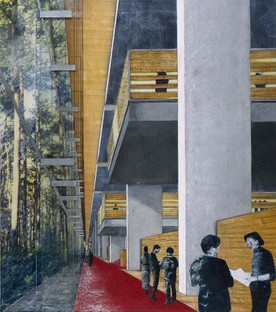