After winning the competition for a new public library in Dornbirn, Austria, Dietrich Untertrifaller has constructed a round pavilion with a unique façade covered with “books”. Inside the building are flexible spaces designed for digital education and for readers of all ages. 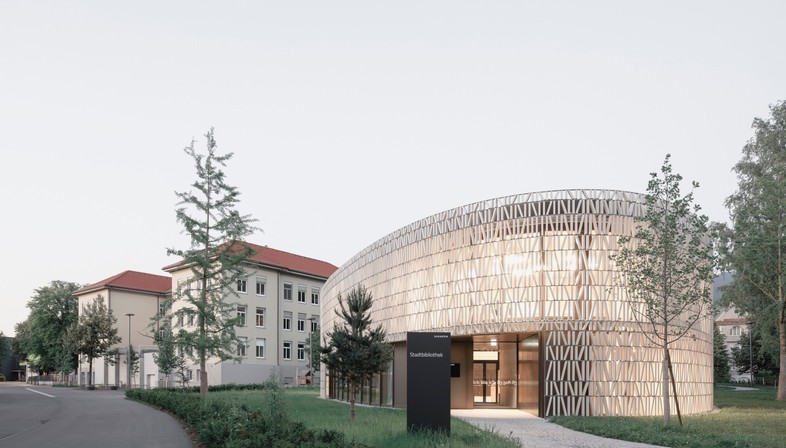 In 2015 the town of Dornbirn, in Austria, announced a competition for construction of a new public library, won by international design studio Dietrich Untertrifaller Architekten. The site on which the new building was to stand was a small lot southeast of the city centre, a green area surrounded by two schools, the old town hall, a theatre and a villa, which at the time housed the main library. Beyond these buildings, the area was primarily residential, with plenty of space for gardens.
Mayor Andrea Kaufmann and his council realised that the town did not have a public place for education in the new media, important for all generations but especially for children. Education in use of the media and technology had to take the form of direct experience, sharing and listening to others.
The most striking aspect of the project presented by Dietrich Untertrifaller, among the 18 competing studios, was the metaphorical representation of the library as a centre for reading through a surface made up of “books” embracing and defining the space. The sense of dizziness one normally experiences before towering stacks of books upon entering a library is, in this case, taken outside, making the building itself into an icon of knowledge and expressing the beauty and substance of its content.
The book is a universal object common to all places and languages, which does away with borders and joins all human beings, without distinguishing on the basis of age or gender, the ultimate material object for the spread of culture prior to the advent of digital tools. When seen from outside, the continuous replication of shelves of books on the circular façade of the new Dornbirn library symbolises the potential of digital media, which become democratically available to all in the building.
The circularity of Dietrich Untertrifaller’s building reflects the infinite knowledge obtainable via the internet, but it is also a result of the site it stands on, which is, as we have seen, a lot in the middle of a series of institutional buildings. Between Jahngasse and Schulgasse, the portion of land on which the old library also stands is crossed by pedestrian paths connecting the main buildings on the two streets. Beginning with this functional given, the project fits into the lot right on one of these routes, while ensuring that the pathway will continue to exist, running through the building’s ground floor. The library thus maintains and adds value to established habits.
The new building is a pavilion on two levels with a concrete structure forming a layout shaped like twin parabolas, joined at the ends of their central axis. These curves rise above a double frame, including an inner layer of timber and aluminium with triple-glazed infill glass one floor high, and an outer layer of steel, set 70 cm from the glass façade, with decorative little prefabricated ceramic tiles on it. Stylised and inclined like so many white books on the shelves, the tiles act as a sunbreak, offering a fixed shading system by day to save on energy consumption. Light enters the reading rooms and users enjoy open views of the park and the town, while from the outside, passers-by perceive the transparency created by this double skin, which, in combination with its circular shape, adds dynamism and lightness to the new building. The almost 8000 “books” sparkle in the evening, transforming the library pavilion into a big lantern and a landmark in the town.
The internal layout is designed to create numerous meeting areas. On the ground floor, the same big, full-height central hall offers a flexible space in which to organise public events and screenings: a screen is concealed in the staircase railing, with the corresponding projection technology located at the opposite end of the corridor. The space is lit up by daylight via a big skylight, which may be darkened and covered with sound-absorbent felt to dampen noise during public events and can also be used for forced ventilation.
Around it are bookshelves, real ones, behind glass walls that create a feeling of great breadth and invite visitors to read the books; on the opposite wall, behind the reception and loans desk, are meeting rooms of different sizes, offering flexible spaces for audiences of different sizes. A wooden staircase leads to the upper level, where there are more bookshelves, reading rooms and open spaces for smaller discussion groups or for reading privately on comfortable coloured armchairs, all organised around the empty space of the hall. Finally, a second ramp of stairs leads to the underground level, containing a multimedia library, a game library and an open space for workshops. The children’s corner is covered with pale brown carpeting, with a hole in the middle reflecting the building’s round floor plan, where children can sit comfortably in a group.
All the furnishings, and particularly the bookcases with their flip-up shelves of adjustable height, were designed by Dietrich Untertrifaller. The lighting is positioned in the upper part of the bookcases and oriented upwards; in the event rooms and the basement, it comes from big round panels suspended from the ceiling. In terms of figures, the three levels of Dornbirn library now have room for up to 100,000 books and magazines, with comfortable spaces and solutions for listening to music, trying out games, drinking a cup of coffee, and discussing it all with other people.
The new building has been approvingly described as a “public living room” because its design and the materials used do not bring to mind an institutional building but a room in the home, which everyone may use as they wish. 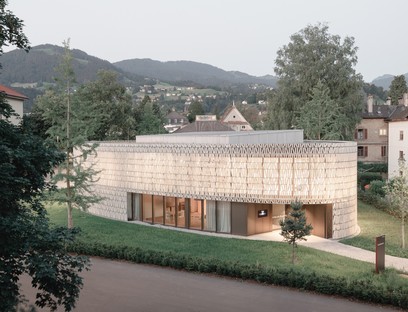 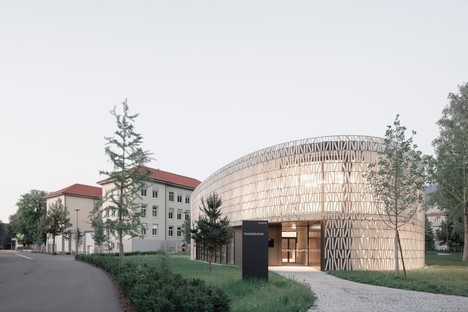 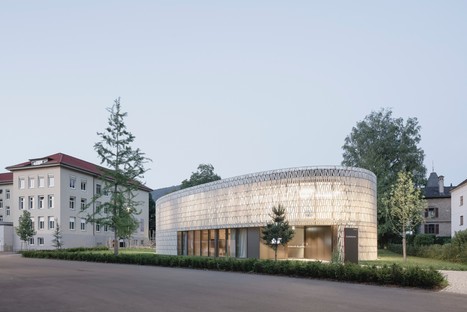 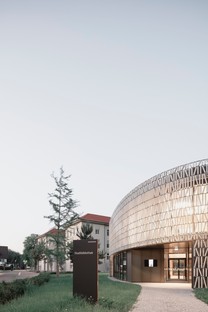 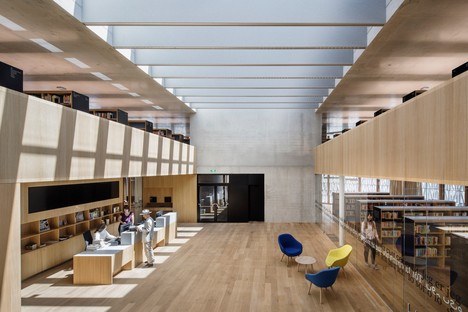 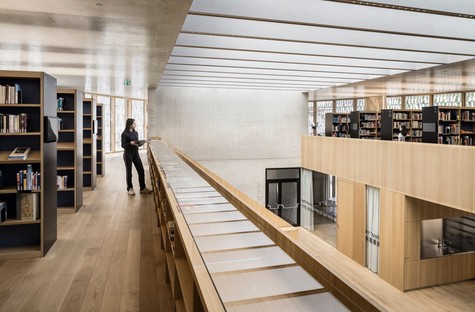 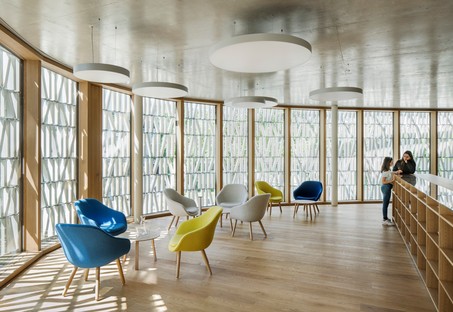 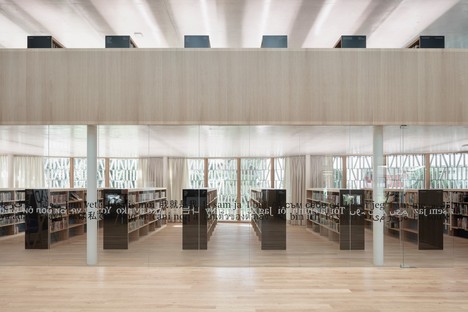 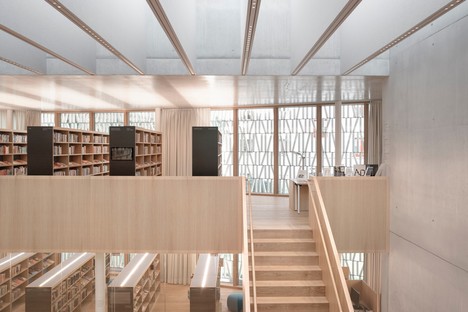 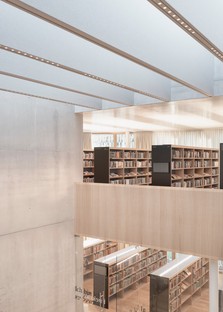 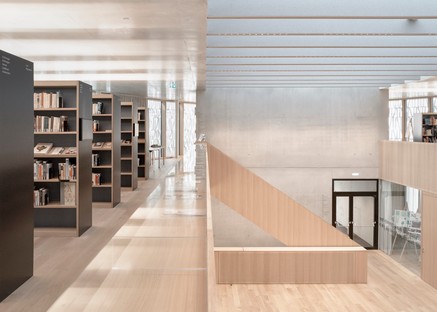 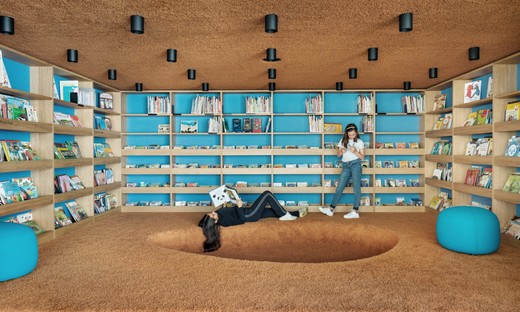 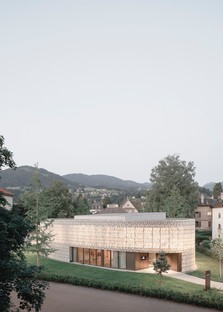 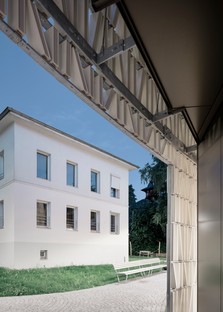 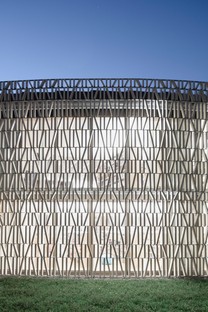 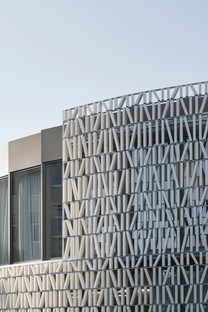 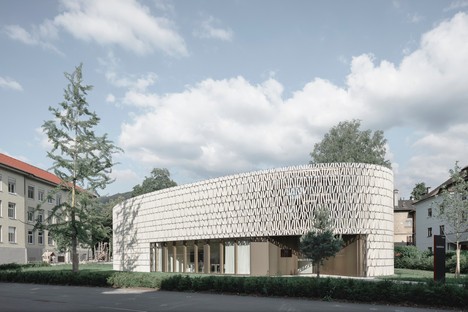 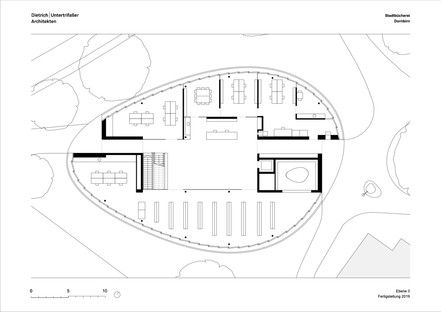 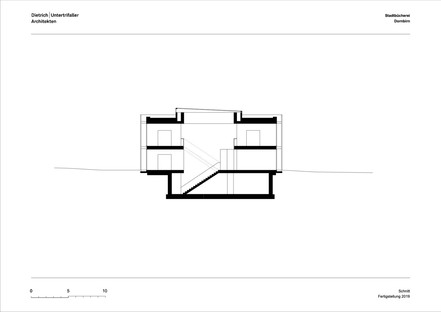 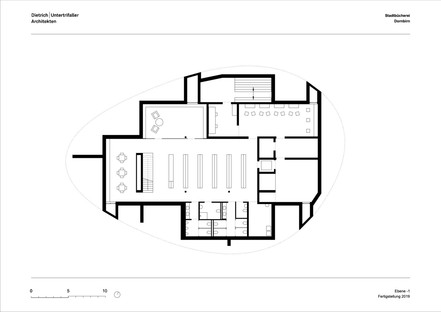