Dietrich Untertrifaller designed a new campus for footwear brand Legero united. Opened in January 2020 on the outskirts of the city of Graz, Austria, the campus is energy self-sufficient, with a layout made up of implementable modules and prefabricated structures. 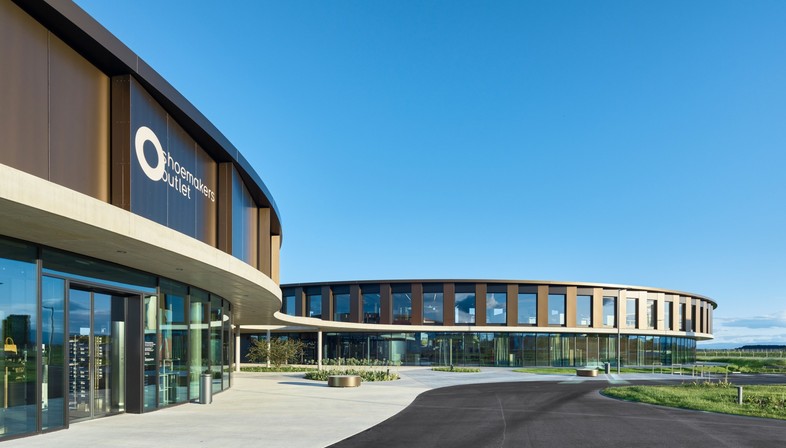 Between the small airport of Graz and the Süd Autobahn crossing the city from side to side is a plot of land facing developed areas on the city’s outskirts on two sides and open countryside on the other two. These ties with the natural environment inspired Dietrich Untertrifaller’s design of a new production plant with offices for Legero united, a footwear brand sold in 40 countries all over the world.
Dietrich Untertrifaller was asked to work on a new building for the headquarters of this Austrian company, containing some of its shoe manufacturing workshops as well as a factory outlet: a single building that had to meet a lot of expectations, on a limited budget.
Not only did the buildings have to be energy self-sufficient, but the new headquarters had to be designed with a specific functional vocation: accommodating growth in the number of employees in the near future without altering the overall design. The client’s insistence on quality workspaces and employee wellbeing led to construction of a building with a focus on the relationship with the greenery around it.
The layout of the complex includes two circular buildings standing side by side, connected by a roof that protects and identifies the shared reception area. While the smaller building contains the factory outlet, the main building, containing the offices and workshops, is a ring around an enclosed garden; looking outside, the workers perceive their location on the boundary between urban and rural land, with vehicles coming and going to the service stations and shopping centres, but looking inside, they find an entirely natural space exclusively for their own use, a little oasis in which to escape the frantic pace of city life.
To solve the problem of how to expand the building, which currently accommodates about 350 employees but will be required to contain 200 more in the near future, Dietrich Untertrifaller designed the buildings as circular cells of different sizes connected by external links. Their structure is designed to support the addition of one or two more floors. When it opened in January 2020, the complex included one level for the outlet and two levels for the plant, the ground floor of which is reserved for production workshops, with offices above. Smaller cylinders grafted onto the building in the inner courtyard contain semi-public areas open not only to employees but to customers, such as the foyer, company restaurant and meeting rooms.
The layout is designed on the basis of organically shaped modules that almost appear to be generated out of one another, permitting planning of orderly, measured expansion in space. While the office building can rise vertically up to three levels, another circular operative block connected to the first building and the factory outlet open to the public can be expanded to up to three smaller circular nuclei, arranged around the main one and connected to it by a roof. For these reasons, the Legero united headquarters may be described as a campus, with the idea that dynamic growth over the years will result in addition of new pavilions which are separate but harmoniously integrated with one another.
The choice of prefabrication was essential to speed up construction. The two ring-shaped floors in the office building are used in different ways, and so they were built in different ways: the ground floor is dominated by concrete, left in view and unfinished in the columns, on the walls, ceilings and floors, conveying the idea of a factory and creative atelier, while the upper level is made of prefabricated timber as well as unfinished concrete, contrasting with metal ceiling elements.
Big timber sections are divided into three areas by three reinforced concrete access cores which provide vertical links, containing elevators and staircases as well as services such as washrooms and utility rooms, concluding in a loggia opening onto the inner courtyard. This solution frees the three workspaces of technological infrastructure to create fully usable, flexible spaces. The speed of installation of prefabricated elements is thus combined with a design carefully planned down to the tiniest details.
Strip windows with black metal frames underline the buildings’ industrial style, while glazing promotes interaction with the landscape to bring wellbeing into the workplace and develop a sense of belonging. All the spaces are sheltered against the sunlight with automatic indoor or outdoor curtains sliding on frames.
The solution of a ring-shaped layout is not only a very bold statement of the plant’s identity but a sign of attention to the workers’ everyday experience, in which the circularity of the spaces offers enrichment with plurality and a wide variety of perspectives, both inside and outside the building.
Use of geothermal heating and cooling and well water achieves the sustainable energy supply the client requested for the campus, and the building is constructed out of domestic timber only, using recycled concrete wherever possible. 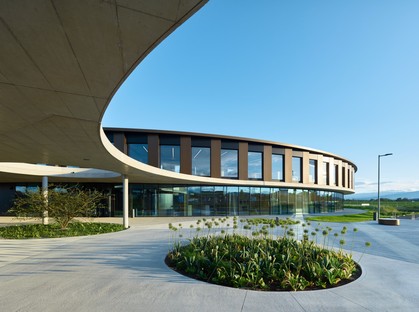 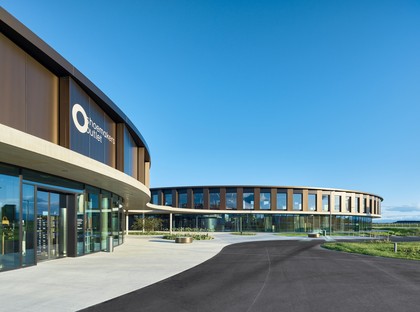 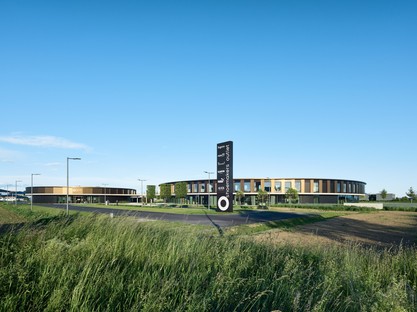 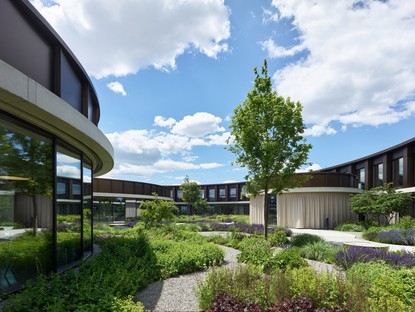 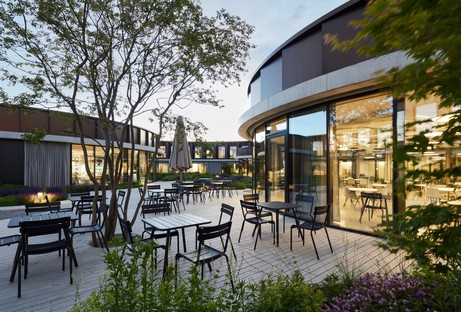 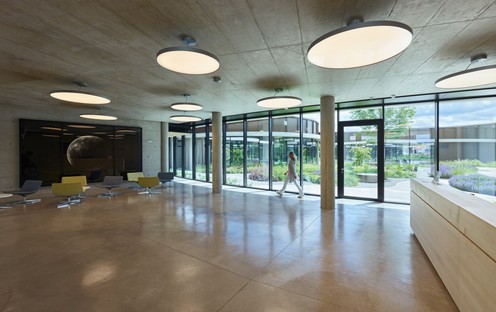 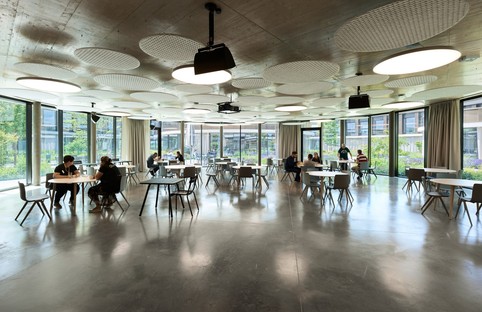 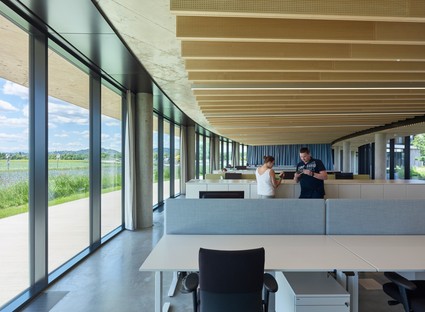 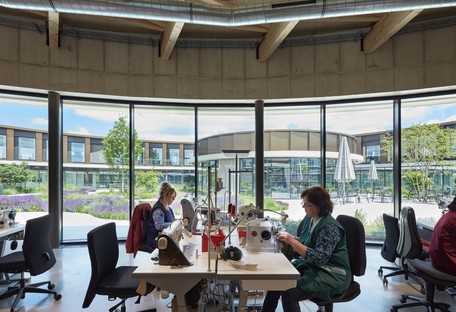 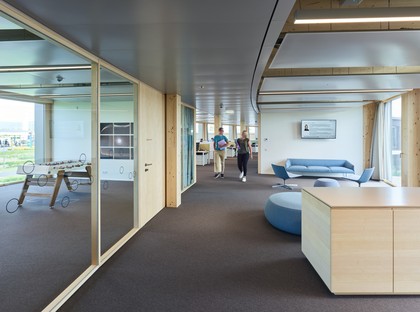 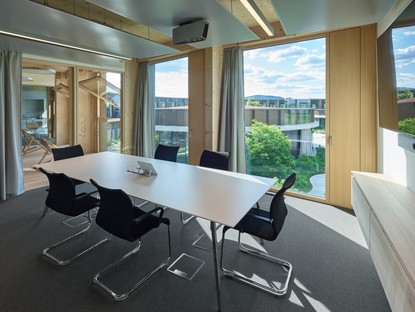 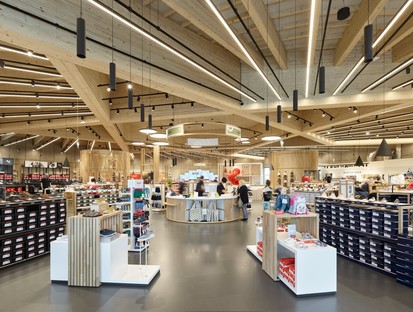 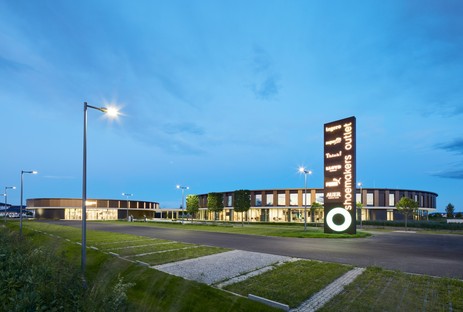 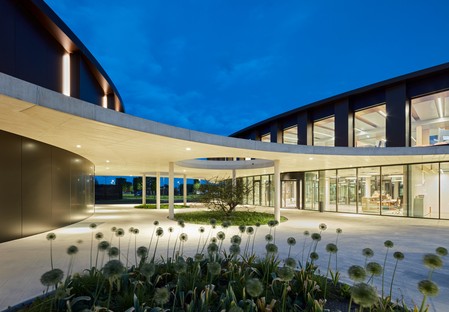 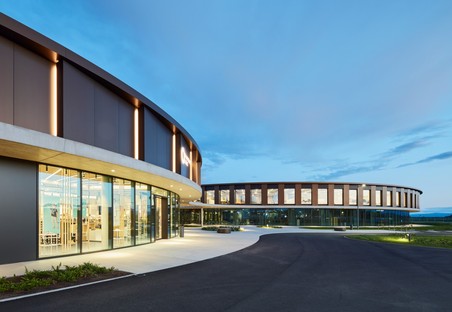 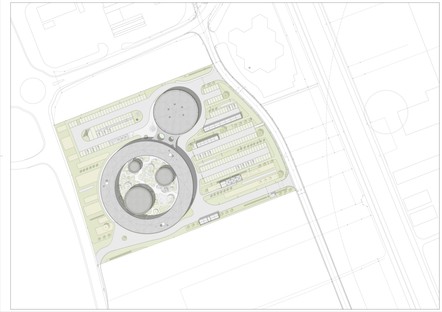 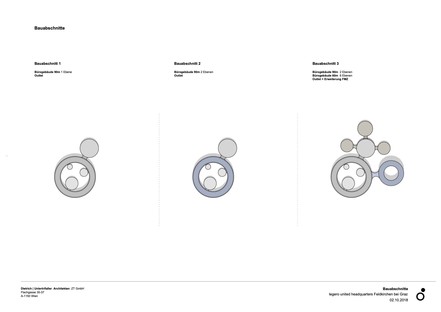 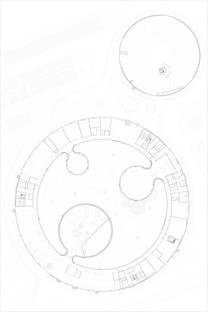 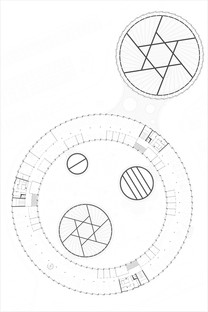 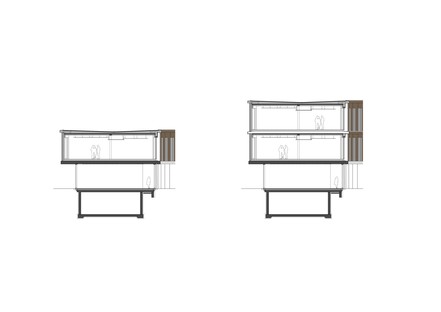