Zaha Hadid Architects designed a new international airport for Beijing, the Daxing International Airport, built on the southern outskirt of the city, 46 km away from the city centre and perfectly integrated into the local and high-speed rail transport network. The airport will accommodate 45 million passengers a year. 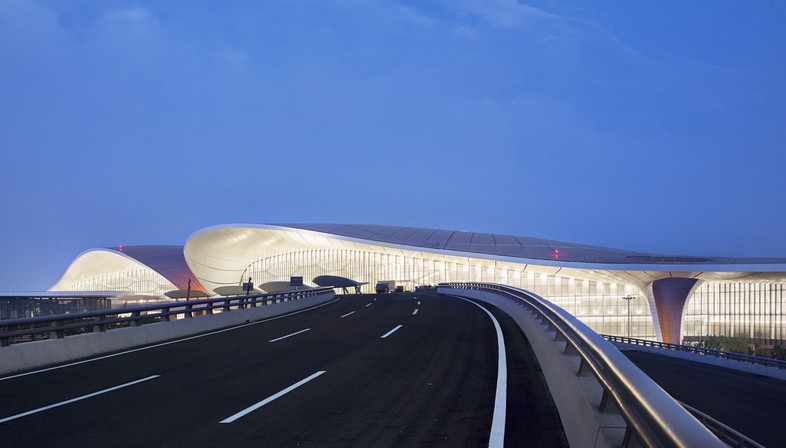 The Daxing International Airport is Beijing’s new international airport designed by Zaha Hadid Architects and recently inaugurated. The international airport was built in the Daxing district, 46 km south of the city centre. The new infrastructure, fully integrated into the local transport system and into the high-speed rail networks, is expected to reduce congestion at the existing Beijing international airport. The design of this futuristic airport involved several architecture firms led by the Beijing New Airport Headquarters (BNAH). Together with the previously mentioned Zaha Hadid Architects firm, the specialised ADP Ingénierie (ADPI) studio collaborated in the design phase working on the functional and technical specifications of the terminal. Two local firms, BIAD (Beijing Institute of Architecture and Design) and CACC (China Airport Construction Company) looked after the technical aspects of the project, working on the implementation of the aeronautical functions of the terminal, as well as of the apron, runways and the air traffic systems. 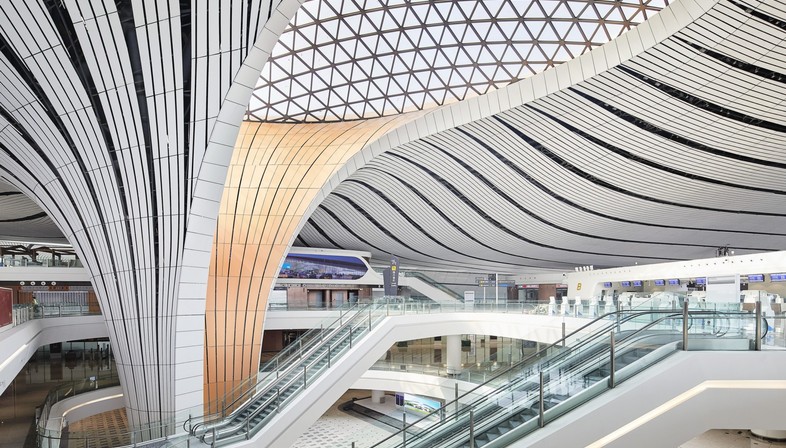 The photo reportage shot by famous architecture photographers Hufton + Crow highlights the fluidity of the spaces of the new functional layout designed by the architects. A project that has achieved and meets exceptionally high quality standards, result made possible by the excellent synergy between the international firms and the two local studios involved in the design and construction of the new airport.
The role played by Zaha Hadid Architects was to realise the integrated design of the entire terminal, in order to have a common architecture language between exteriors, interiors, technical workstations and retail spaces. The studio also looked after the distribution layout and the planning of commercial spaces. 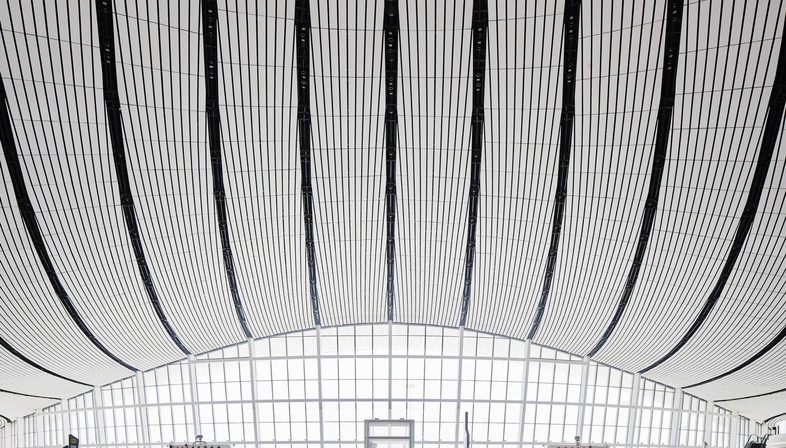 To visitors, the new international airport appears like a futuristic place. However, while working on the project, the architects drew inspiration from the principles of China’s traditional architecture, such as designing interconnected spaces around a central courtyard. In the project designed by Zaha Hadid Architects, passengers are guided along routes leading them to a large central courtyard, directly from the different areas of the terminal, including the departure, arrival or transfer areas. This is the heart of the terminal, a space for meeting and waiting, organised over several levels. This compact and radial distribution proved to be very effective because the many services and amenities designed for passengers are located in the central courtyard, minimising the distances between the check-in area and the gates, as well as the connections between gates for passenger transfer.
Passengers are guided through the airport by six flowing forms, which also play a crucial structural support role for the vaulted roof of the terminal, while linear skylights allow natural light to permeate the spaces, directing passengers to and from the departure gates. 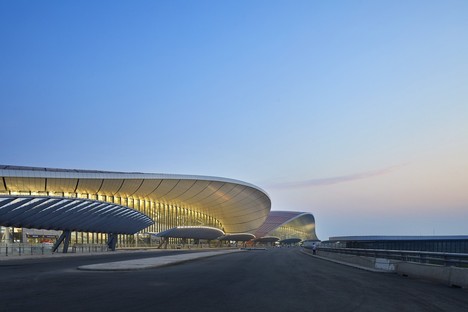 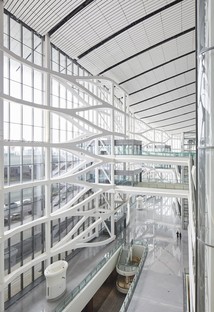 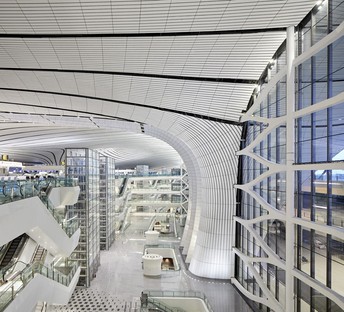 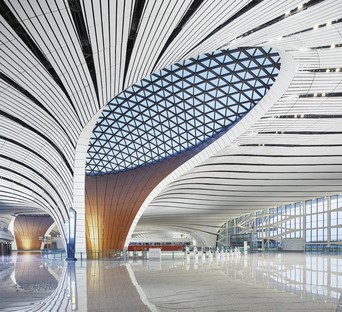 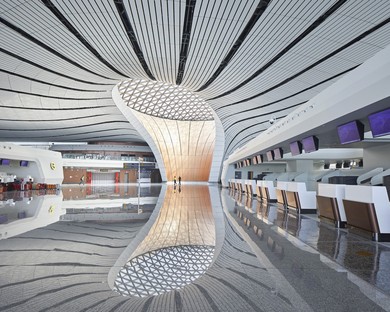 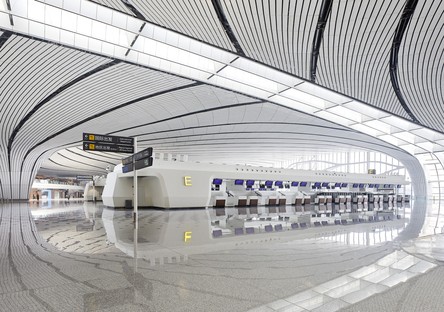 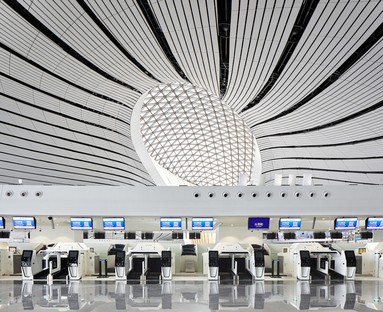 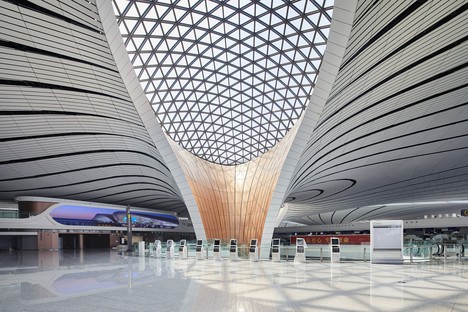 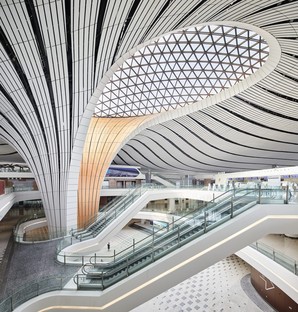 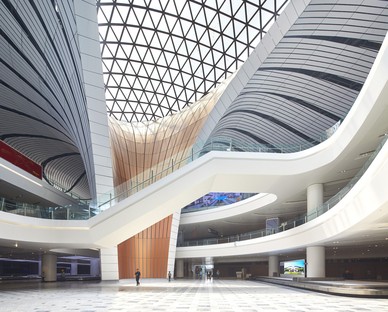 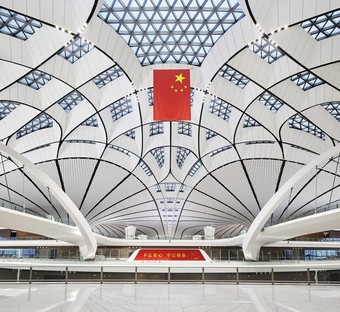 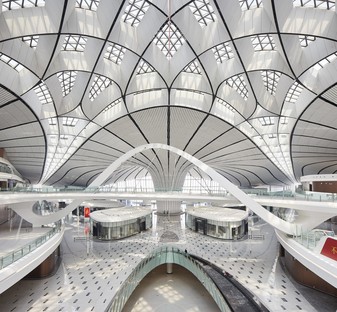 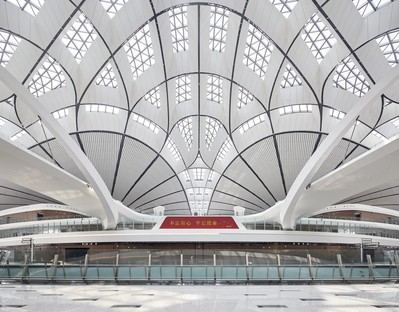 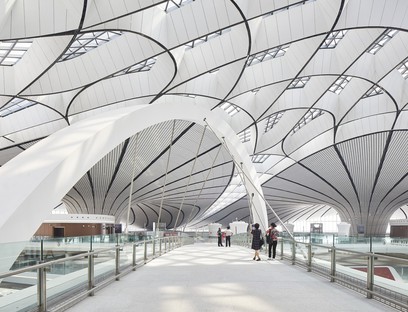 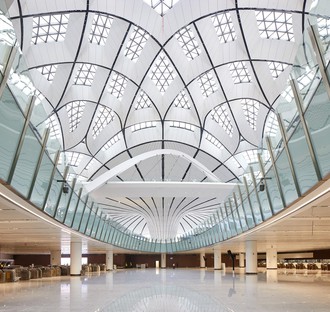 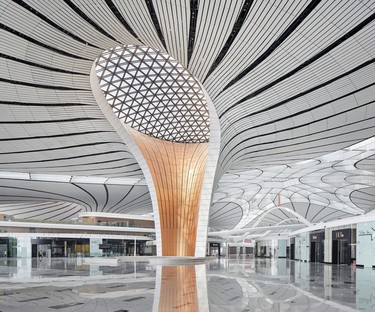 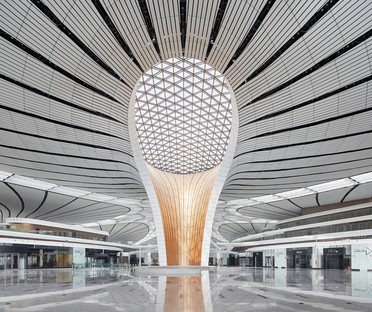 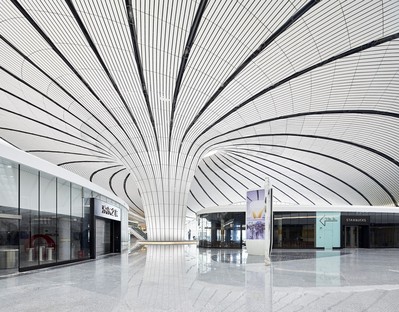 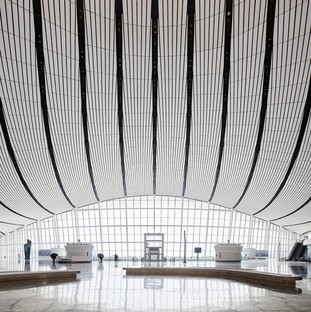 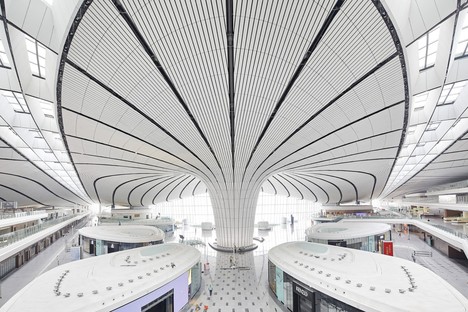 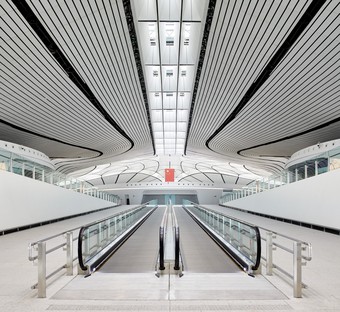 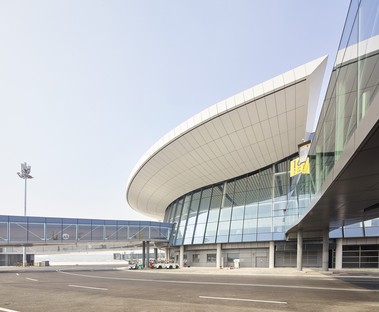 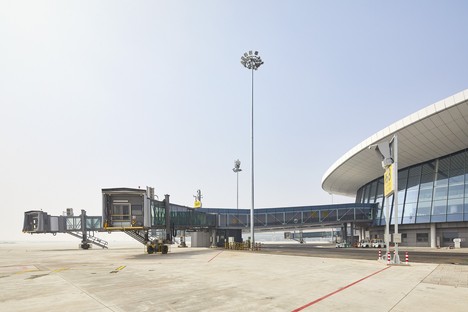