The recent urban regeneration project designed by the DAP studio transformed an abandoned area, on the outskirt of Milan's Garbagnate district, into a square-garden that has become a point of reference for an entire neighbourhood. Whatâ's more, the space became the protagonist of a short film selected among the 20 finalists of the first edition of the Venice Architecture Short Film Festival, an event organised by the ArchiTuned cultural association and dubbed "Living Together Again".

In Garbagnate, on the outskirt of Milan, the local administration commissioned the DAP studio, founded by architects Elena Sacco and Paolo Danelli, to design the redevelopment and regeneration project for an abandoned suburban area. A 2,500 m2 lot located along Via Moniso, in a peripheral area of the city. The goal was to regenerate this abandoned place, providing the local community with a public space, accessible to everyone. An objective that architects from the DAP studio achieved through a functional and elegant project characterised by clean lines, which became the protagonist of a short film selected among the 20 finalists of the first edition of the Venice Architecture Short Film Festival. A project that has transformed the area into a reference point for the entire neighbourhood. 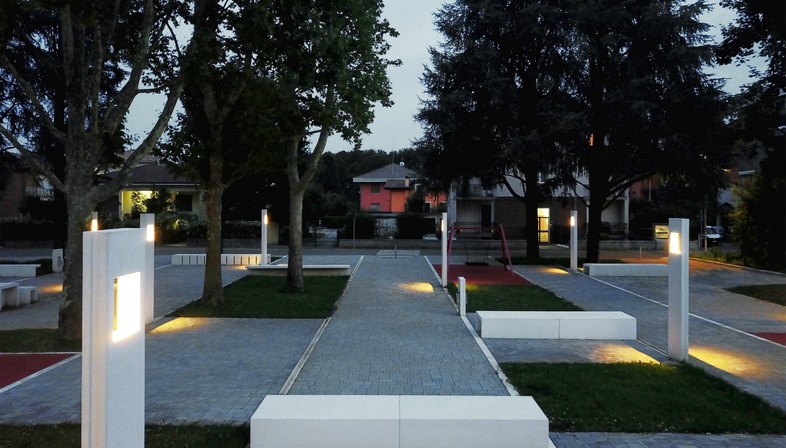 Architects from the DAP studio found themselves face to face with the challenge posed by an abandoned suburban area, covering 2,500 m2, which they themselves defined as “an empty space trapped on both sides between residential buildings and, at the same time, closed off by a wide curvy road that merges with the state road”. A "non-place" whose meaning and function was to be defined and from which to bring out new potential for the community. A space where local residents could “live together again”, thus fully responding to the "Living Together Again" ambition of the international event organised by the ArchiTuned cultural association.
At the start of the project it was crucial to identify and classify the tree species still standing in the area, which had survived the local urban development actions. In parallel, the architects decided to remove the built elements present that limited the area and its functions (the perimeter fence, the old deteriorated road paving, an unsafe public toilet, etc.), creating a direct relationship with the street, as well as between the street and the city, and in turn favouring a concept of fusion between the image of the "garden" and the idea of the "square" in which to integrate the existing trees. A vision brought to life through the definition of a variable geometric grid, which made it possible to create a recognisable design for the square and, at the same time, to deal with the irregular layout of the trees. The design of the square consists of a succession of parallel bands of different widths punctuated by white concrete curbs and designed to wrap around the trees, elements that have become the iconic and silent witnesses of the rest areas. The different colour backgrounds of the bands define their individual functions: green and red for childrenâ's play areas and grey pavement for the others, while it is also possible to change green and paved areas to meet new and future needs. The irregular arrangement of the trees and the geometric regularity of the paving designed by architects from the DAP studio contradict each other, elements that have become the symbol of the link and dialogue between the natural aspect (in other words the garden) and the built area (the square). A dialogue that sees the participation of all the various elements of the project: the street lamps, for example, with their soft and suffused light which add to the natural element, while at the same time, together with the other urban furnishings present in the area, they are objects characterised by an essential geometry, whose position represents an integral part of the overall design that dominates the square. 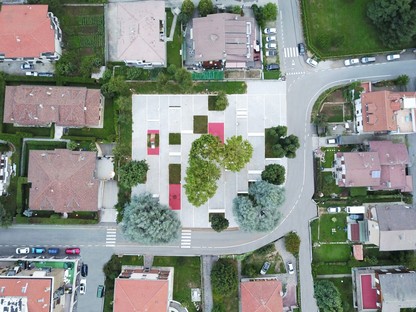 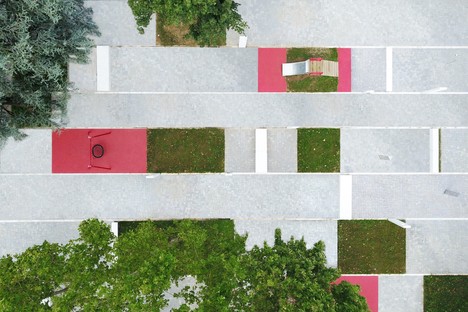 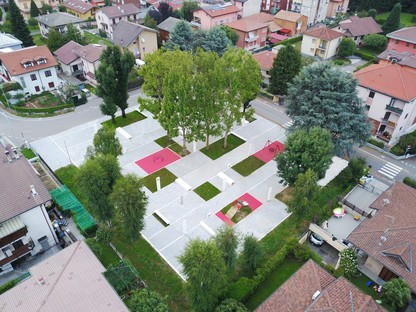 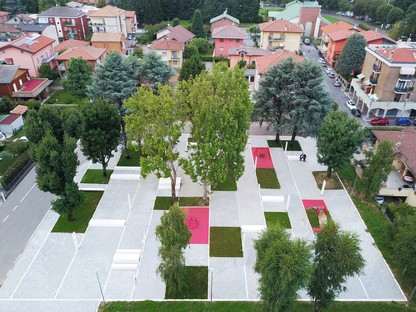 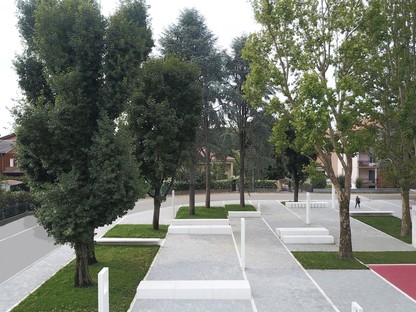 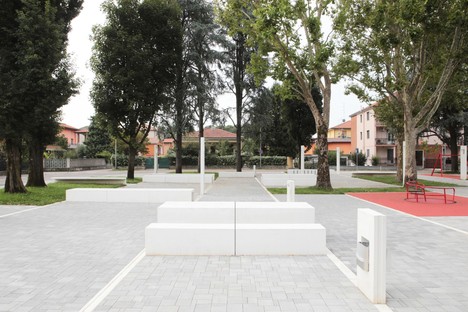 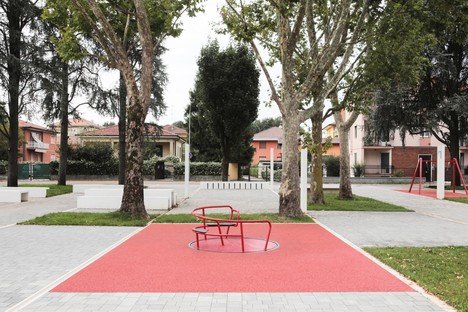 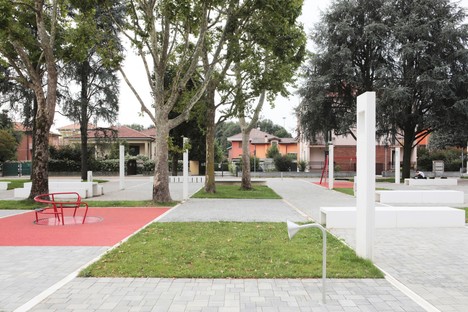 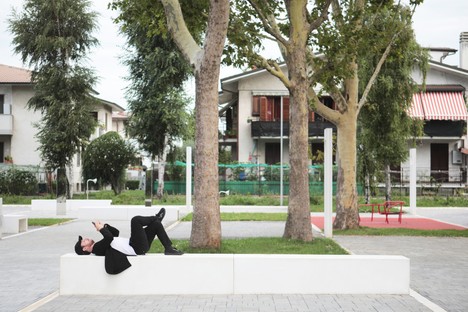 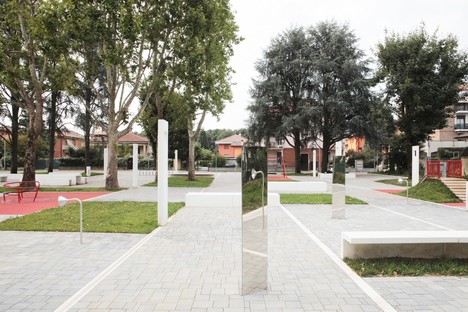 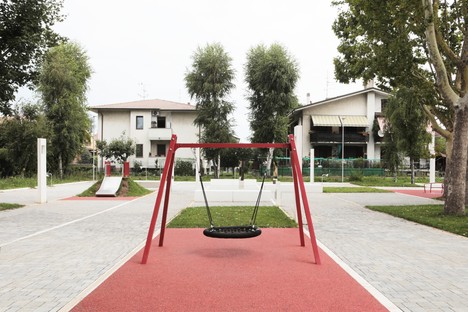 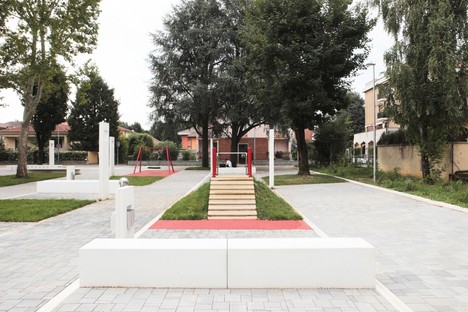 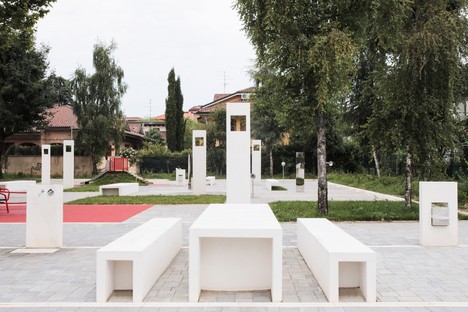 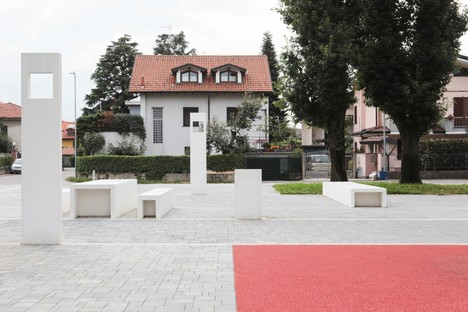 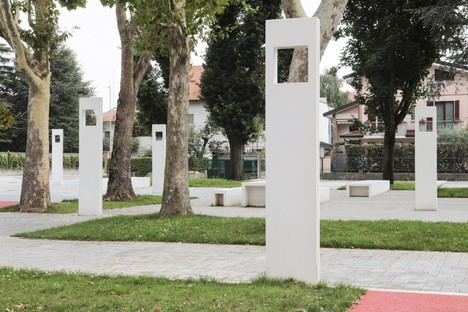 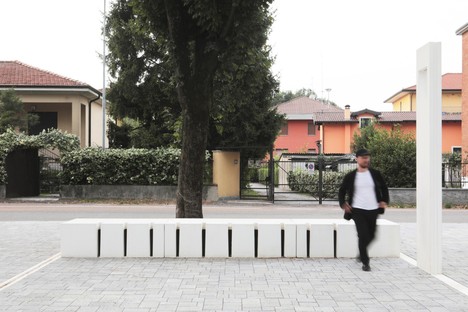 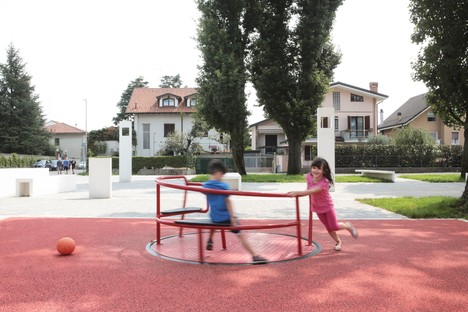 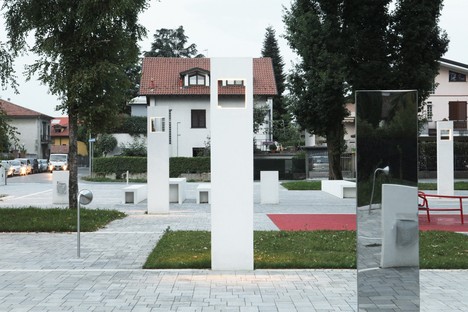 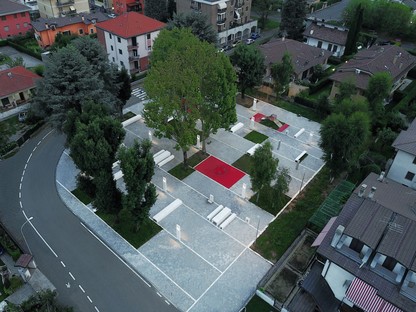 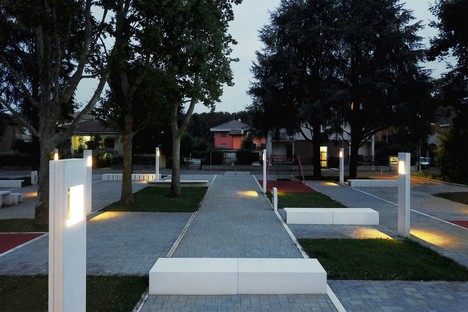 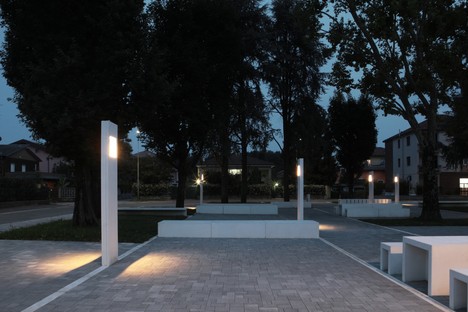 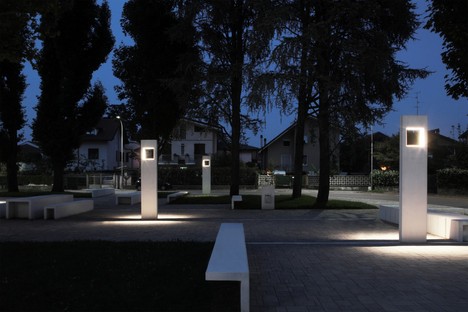 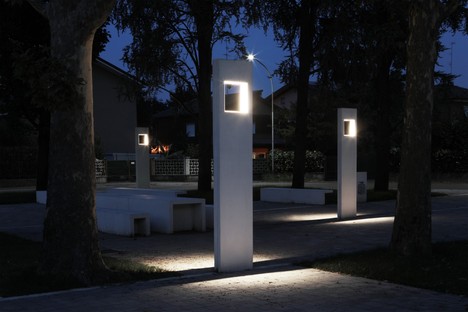