Following an international design competition, Cuboid Architeckti, the studio founded by Aleš Papp, Milan Vít and Magdalena Pappová, designed the City Sports Hall in Kuřim, in the Czech Republic. The new sport hall is only the first of a series of projects for the city’s new sports complex. 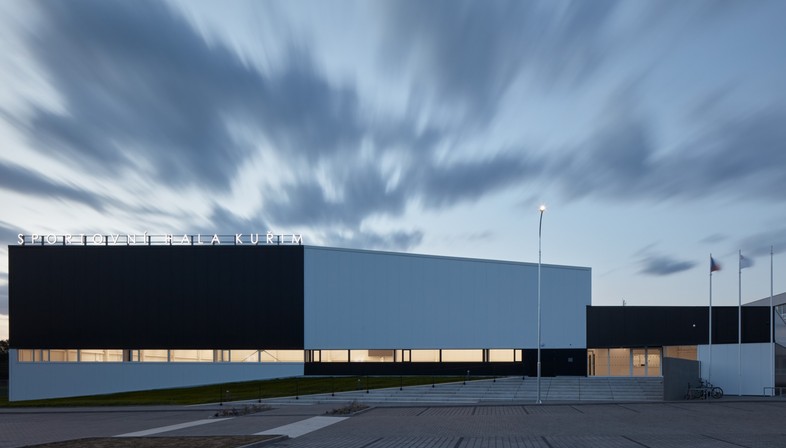 In 2009 Cuboid Architeckti, the studio founded by Aleš Papp, Milan Vít and Magdalena Pappová, won the first prize in the international design competition for the new sports hall in Kuřim, in the Czech Republic.
The City Sports Hall in Kuřim is part of a wider-ranging programme currently under construction to give the city a modern, efficient sports complex. The recently completed sports hall stands in the centre of the site, in a position that automatically puts the building in a condition to become a symbol of the complex as a whole. Aware of this responsibility, the architects of Cuboid Architeckti have constructed a sports hall with an exterior that reflects the function it was designed for, with all the expressive power needed to make it an icon of the complex as a whole. 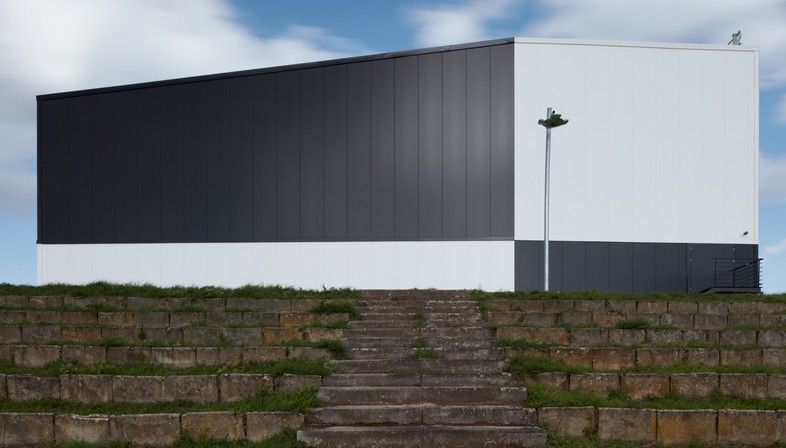 “Mens sana in corpore sano”: the Latin phrase is perfect for the City Sports Hall project in Kuřim by Cuboid Architeckti, the studio founded in 2006 by architects Aleš Papp, Milan Vít and Magdalena Pappová.
Juvenal’s famous words are certainly appropriate for a sports building, but in this case architects Aleš Papp, Milan Vít and Magdalena Pappová have come up with a design that is also attractive for the “mens”, the mind.
“Black and white / like the colours of Kuřim, / like counterparts that complete one another, / like a ball, / like a game...”
This poetic description is how the architects of Cuboid Architeckti introduce us to the concept behind the building and identify the essential elements that attract the observer’s attention right away, even from the outside. Working with large, compact volumes, especially in the arena, the architects add rhythm to the walls by alternating black and white surfaces. Different shapes and colours allow the building to stand out from its surroundings and capture the attention of passers-by. A long, narrow strip window runs all along the main façade at the level of the stands, announcing what is going on inside the sports hall to viewers on the outside. At the same time, when seen from inside, the strip window frames the stands and provides natural lighting that does not disturb the sporting events going on inside. 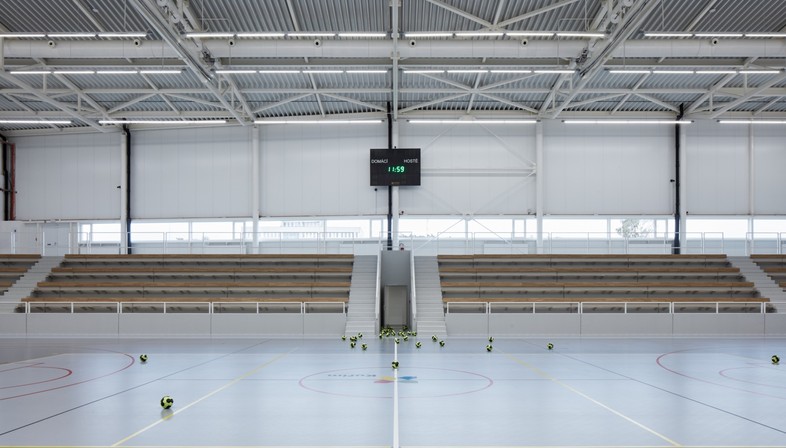 The new sports hall contains a 40 x 20 metre handball court with a free height of 10 metres, occupied on one side by bleachers containing about 360 seats for spectators. On the lower level is the athletes’ area, with locker rooms and storerooms as well as a reception and entrance hall, the only area shared by both athletes and spectators. To ensure the flexibility of use of the new building for other sports and cultural activities in the city, the architects allow for the possibility of configuring the playing field in various different ways. A mobile system with mesh curtains suspended from the ceiling can be used to divide the sports arena into three sections. 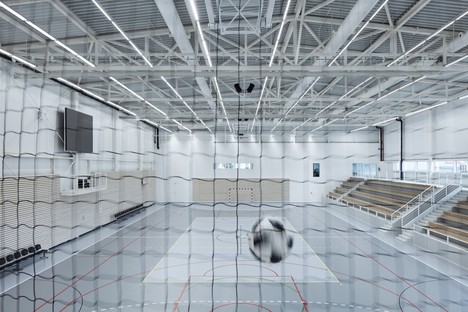 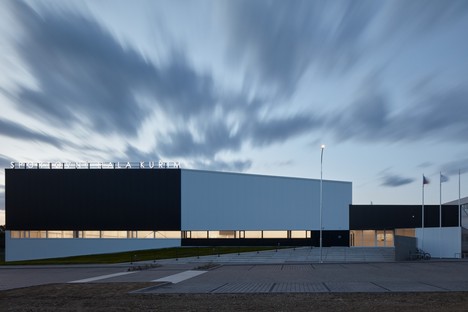 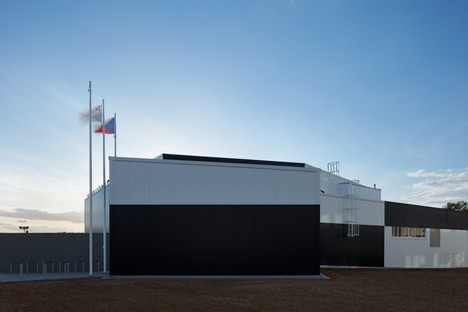 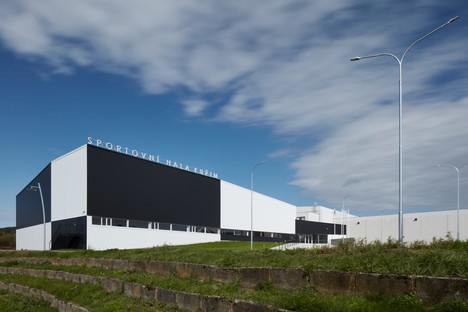 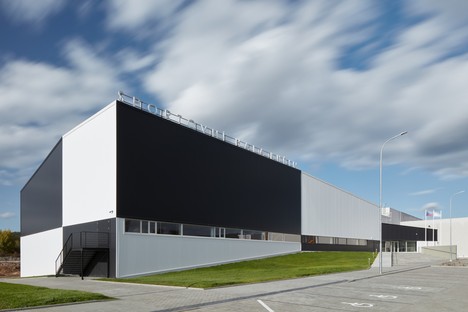 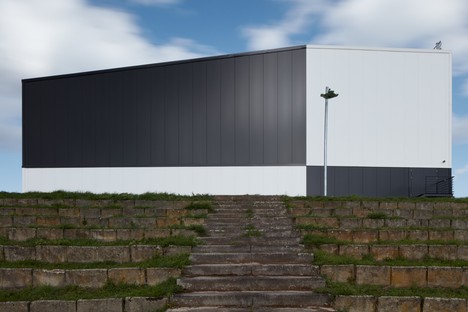 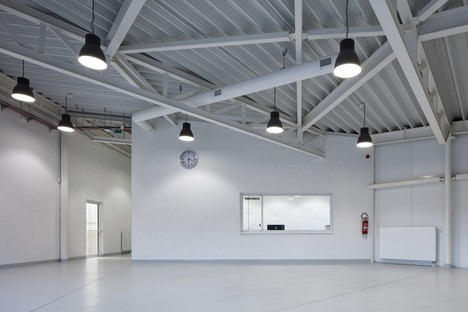 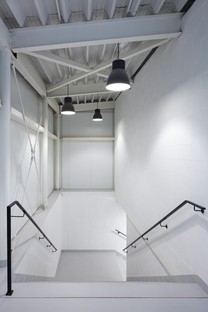 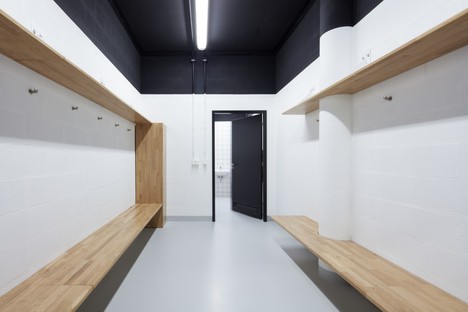 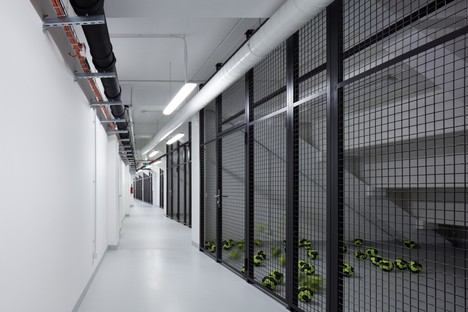 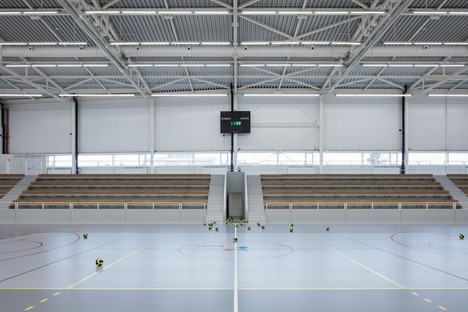 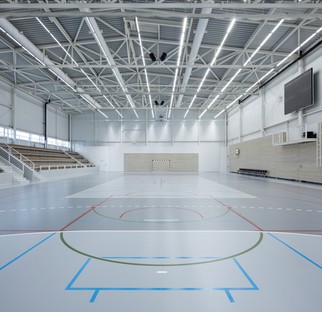 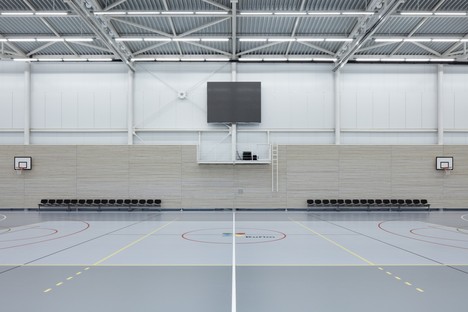 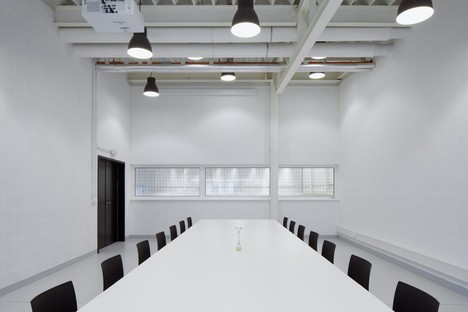 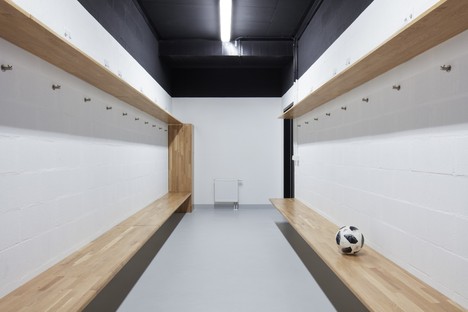