2Hien House in Tay Ninh is an experiment in strengthening family bonds and an antidote to land consumption for private homes at the expense of community space, revealing a new relationship between private and shared that can even save energy! 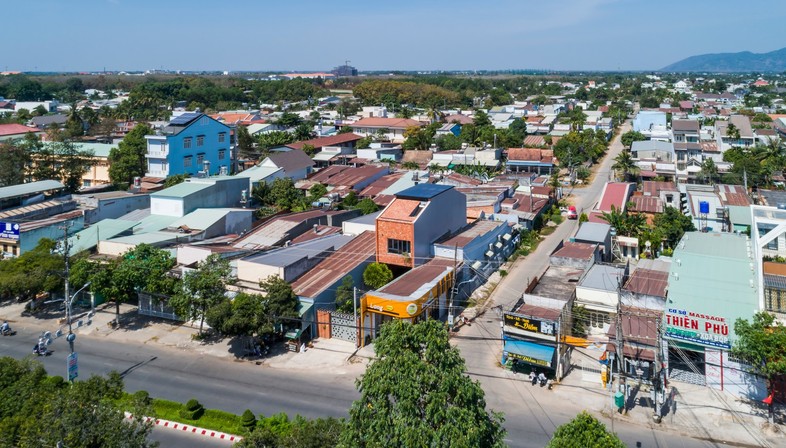 Bui The Long, Vo The Duy and Nguyen Thi Xuan Thanh are the three founders of CTA Creative Architects in Ho Chi Minh and the designers of the 2Hien House, built in 2020 in Tay Ninh, north of the Vietnamese capital. They graduated from Ho Chi Minh City University of Architecture and belong to the generation of young architects now working in Vietnam with awareness and sensitivity to the issue of increased population density and land consumption in urban areas. “Like many other countries in the world, Vietnam is being affected by global warming. Natural disaster happens more often, temperature and air pollution increase. People in large cities in Vietnam suffer not only from overpopulation and lack of green spaces, but also from the pressure of urbanisation, with an impact on their mental and physical health. Spending time with family and keeping in touch with others seem to be forgotten,” they comment on their T House in Binh Duong, completed in 2017 and inspired by reflection on opportunities for different generations to live together. In this project they developed a home on two levels alternating volumetric blocks with voids. The private cores were separated by spaces in which three generations of the same family could come together and enjoy nature within their living spaces. The public plaza, increasingly neglected in the urbanisation of big cities such as Binh Duong, is in a way recreated in the private home, which is ideally given the look and functions of a village. Thus the home encourages people to spend more time in the common area, strengthening family ties.
This research is similar to that conducted in their subsequent residential project, the 2Hien House in Tay Ninh, erected as a new construction on a slender strip of land squeezed between other lots on one of the main roads to the city centre. The suburban construction has a lot in common with the “tube-house”, a traditional form of architecture in Vietnam’s big cities, where several generations of the same family used to live on different levels in the same home. This building is not as tall, but maintains the same elongated floor plan with windows only at the front or, possibly, the back. The need for light, air and a view linked with the concept of physical and mental well-being inspires the architects to reconsider the relationship between built and empty spaces, between covered and uncovered surfaces, and between private and common spaces in the home’s layout, reconsidering the floor plan. In the 2Hien House this reduces the built space on the lot by more than half, leaving the rest for versatile solutions, in this case completed with gardens. 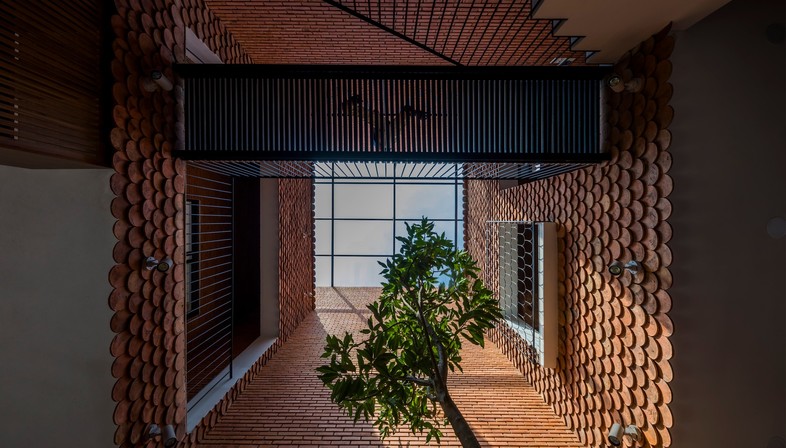 The project has two framed garden spaces at the front and back of the lot, and uses the central portion to divide the home in two, divided by a central patio covered with a glazed roof. The open spaces to the north and south and the upper level rising above the height of the adjacent buildings allow the building to convey a large amount of sunlight into the patio and provide constant natural ventilation, with obvious benefits for saving energy.
The theme of living together is expressed here with only two generations, the parents and their children, who are allocated a portion of the first floor. The parts are distinct, but both overlook the patio so that they interact and complete one another. They are in fact designed as raised “verandas” connected by a suspended walkway over a little courtyard garden and a staircase leading to them, and contain the living room, dining room and kitchen.
The greatest risk involved in homes built on lots of this shape is that of creating a series of rooms connected only by hallways, distant and disconnected from shared spaces, but the addition of the patio and verandas creates situations of sharing even in each person’s everyday living space.
“In the memories of many people, the veranda is not only a transition space between inside and outside of the house, a cover from the sunlight and rain, where I can catch the cool breeze, but also a place where children sit and wait for their grandmother's cakes coming back from the market, where mothers pick up vegetables or the family gather to pack cakes for Tet holiday in Viet Nam”, write the architects, mentioning some of their country’s customs. The verandas are therefore spaces in which the family can be together, visually linked, so that they can perceive one another’s daily lives. The children’s and adults’ bedrooms on the upper level are preceded by buffer zones which are indoors but enjoy large windows: the children can study and the parents can work from home, looking through the patio windows, or they can all relax while keeping an eye on what is going on downstairs. The lowered eaves wrap around the children’s learning area, while the railings create a space that is safe but airy.
The home is made of concrete and ordinary red brick, untreated and without plaster, precisely to save on finishing and maintenance costs. Natural brick is paired with the old fish-scale tiles which the family kept when their previous home was demolished, which cover the roof and the indoor and outdoor walls of the patio, identifying the blurring boundary between inside and outside. 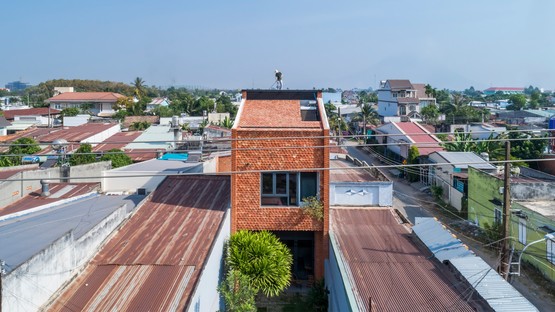 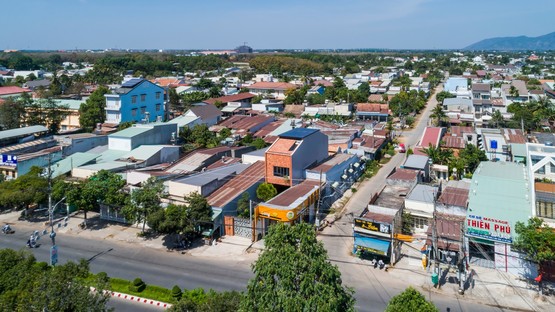 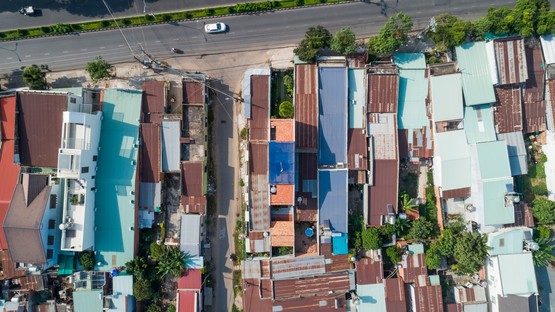 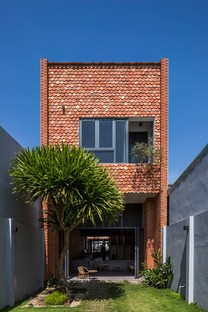 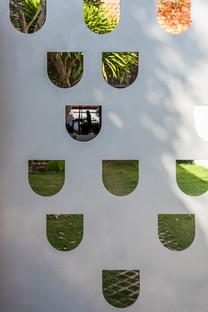 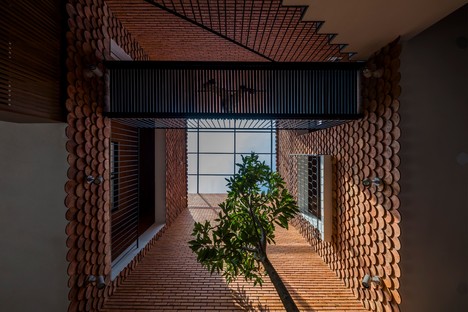 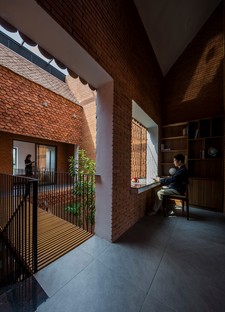 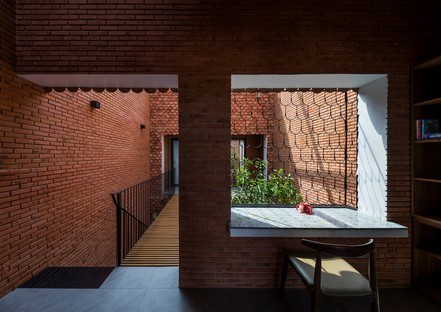 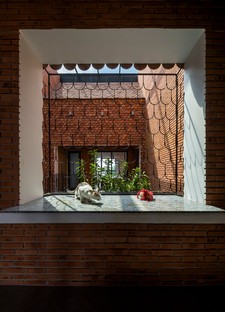 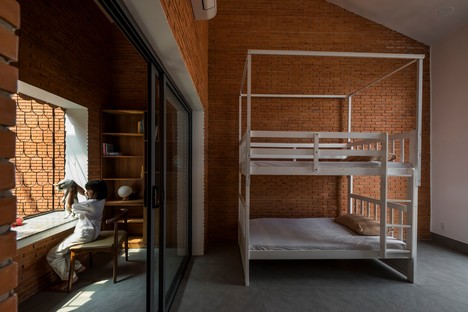 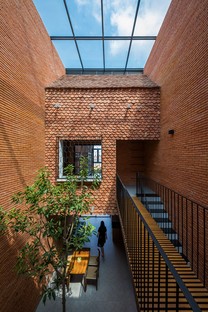 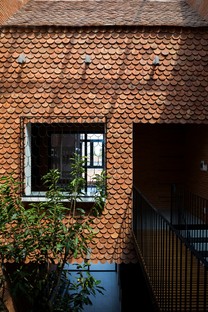 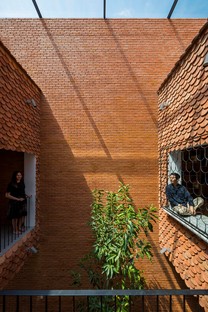 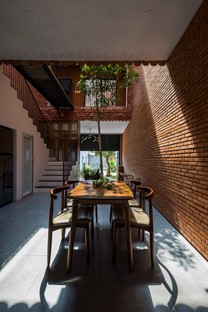 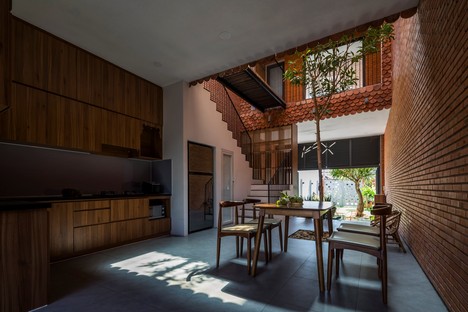 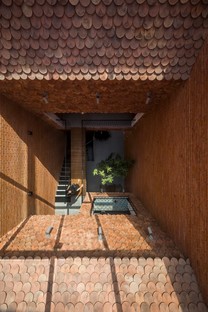 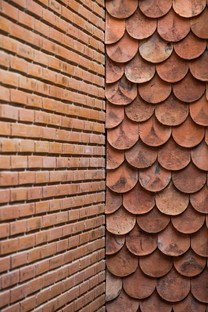 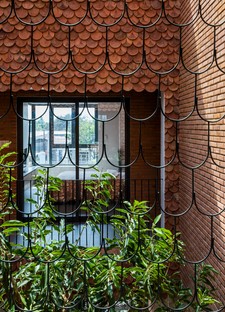 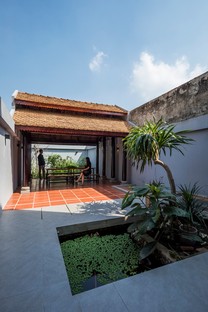 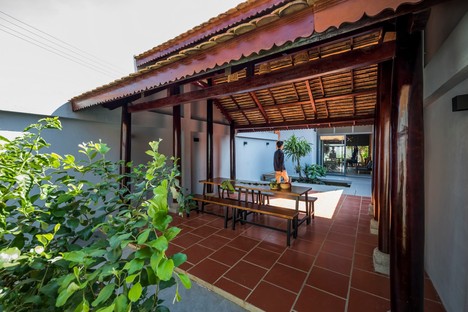 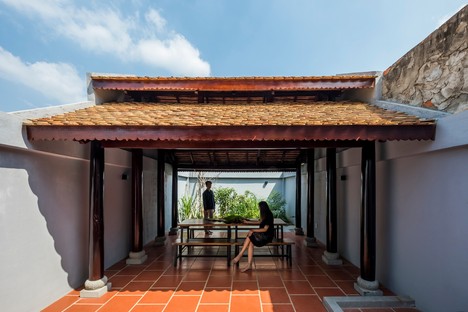 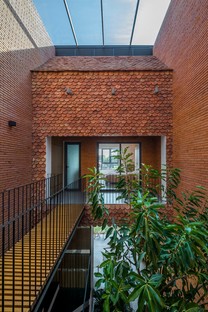 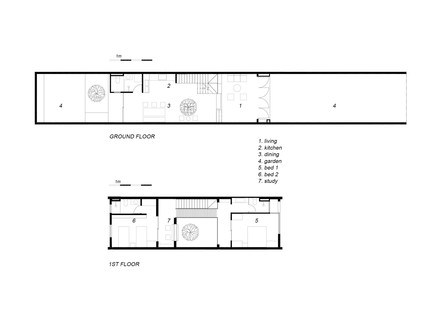 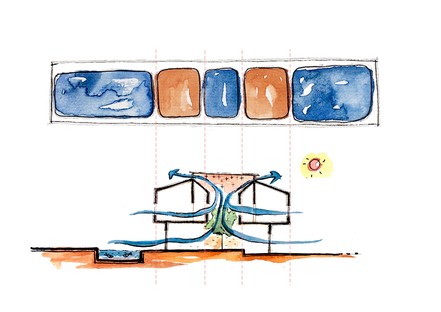