The new campus, which will house the University of Milan’s scientific departments, will be built inside the so-called MIND-Milano Innovation District, located within the former Expo 2015 site. The architectural concept was designed by the CRA-Carlo Ratti Associati architecture firm for the Australian Lendlease real estate group, whom the University’s Board of Directors entrusted with the entire process of building and managing the campus. 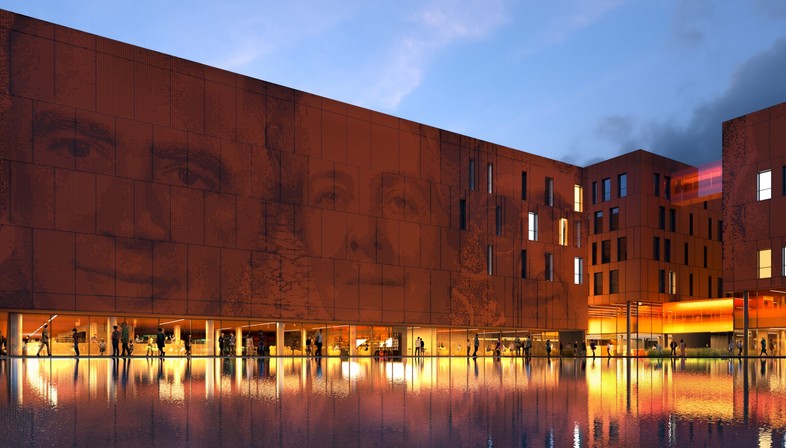 On December 11, the University of Milan’s Board of Directors entrusted the Australian Lendlease real estate group with the entire process of developing the masterplan design, as well as the business plan for the new campus for the University of Milan’s scientific departments. The project involves a team of companies and professionals, including the international architecture and innovation firm CRA-Carlo Ratti Associati, which developed the overall architectural concept in collaboration with Italian architect Italo Rota.
The new university hub, which is expected to be inaugurated in 2025, will be located in the heart of the so-called MIND - Milano Innovation District, the new science district that is being developed at the former Expo 2015 site, according to a masterplan designed by the same CRA-Carlo Ratti Associati firm. The Learning Centre, a library open to the public, will be located at the intersection of what used to be the cardo (the main North-South oriented road) and the decumanus (the East-West main road) of Expo 2015. Set in this symbolic place, the library will represent the gateway to the new campus for people living in Milan’s metropolitan area.
The campus will extend over 190,000 square metres and will serve a community of around 23,000 people, including researchers and students of the University of Milan.
One of the main challenges faced by the project was determining precisely how a historical institution of higher education can change and adapt to the digital era. Architects reinterpreted the traditional layout characterising many Italian and European universities, all developed around a courtyard. Several elements of this project also pay tribute to Milan’s architectural tradition and in particular to Ca' Granda, the 15th-century brick building designed by Renaissance architect Filarete and that today houses the headquarters of the University of Milan. The “Campus 2.0”, as the project designed by CRA-Carlo Ratti Associati together with architect Italo Rota was named, develops around a network of green courtyards with five brick buildings connected by uninterrupted pedestrian paths and organised on different levels which make up the Common Ground of the campus.
The brick buildings pay a clear homage to Ca' Granda, yet they were designed using digital technologies. Each brick of the façades will in fact be individually positioned by a robotic arm, following a parametric design. Each brick will be interpreted as a physical pixel and then used to compose large-scale three-dimensional tapestries with textual and visual content. The Common Ground is a characterising element of the project: a public space that winds through the campus, an outdoor path nearly 1,200 meters long consisting of uninterrupted walkways and crossings connecting the different buildings and courtyards, protected by a canopy or portico, that can be used all year round. The route also involves the surrounding buildings, connecting them through a single indoor path approximately 800 metres long. The Common Ground is expected to strengthen the connection between the campus and the surrounding neighbourhood, thus stimulating interaction between all the various players operating within the innovation district: the University, businesses, as well as research and development centres. 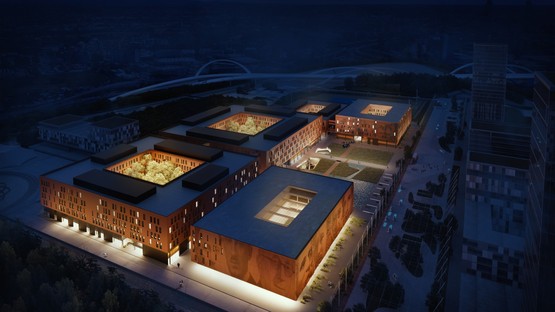 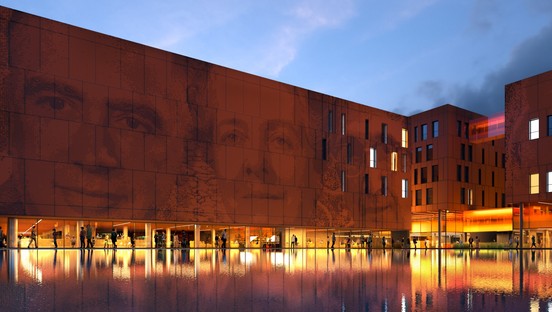 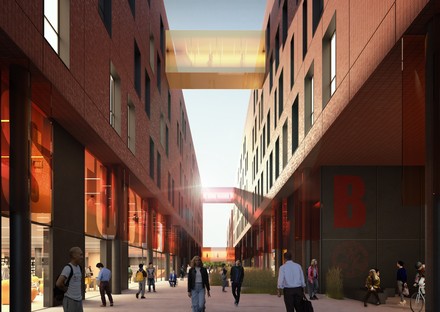 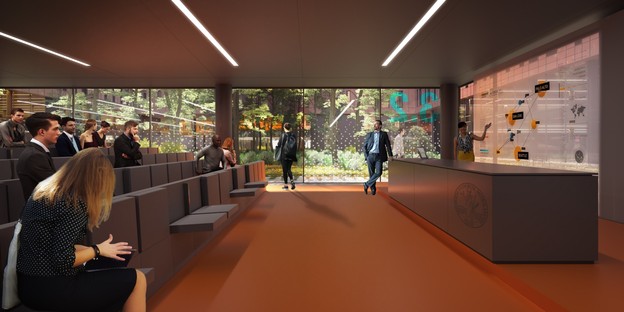 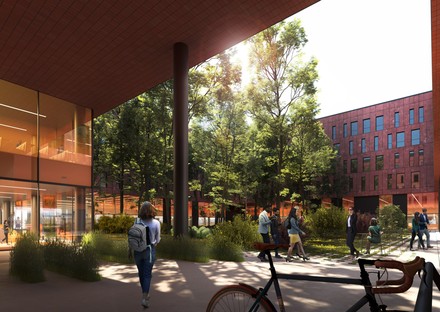 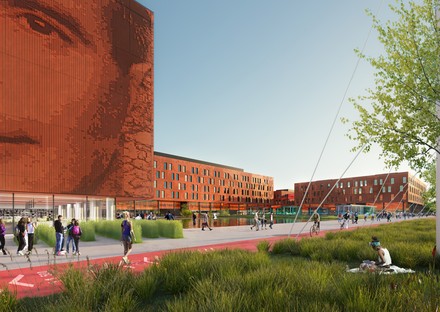