Italian studio CN10Architetti has completed the renovation and expansion of the MCR home in Villa d’Adda (Bergamo), adding a new level for the family’s daughter. The new space in the MCR home creates a sense of intimacy while maintaining continuity with the landscape. 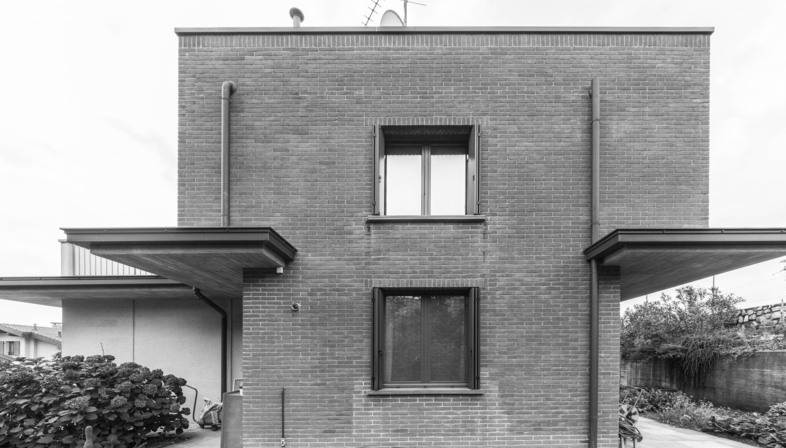 In approaching the MCR home project in Villa d’Adda, in the province of Bergamo, Gianluca Gelmini and Andrea Pressiani of CN10Architetti have completed a process of respectful observation and revision of the existing building, adding a level containing a new apartment.
The house is located on the slopes of Monte Canto, in the northeast part of Villa d’Adda, an area which, as the architects note, has not been developed in an orderly fashion over the years like the historic town centre constructed along the main roads; the area was only recently divided into lots, with houses scattered here and there. Unlike the many houses with two to four gabled roofs dotting the landscape among the fields and forests, the original MCR home was a modern construction on a single level, plus an attic, with a flat roof and large horizontal windows, with two large overhanging roofs that gave the home its unique character.
The family needed to add a new level to contain their daughter’s apartment. The architects managed to maintain the specific typological features of the existing home and give them a contemporary twist, with solids and hollows, niches and jutting planes making every wall look different, according to its orientation.
They installed an outdoor staircase leading from the main southwest wall up to the separate door to the new apartment on opposite side of the upper level: this added horizontal thrust to the southern façade, recalling the original roof on this side. The new apartment maintains the square layout of the ground floor, breaking it up into alternatively covered and open spaces which completely change the way the space is perceived. The foyer leads to a small northwest-facing patio on one side, with sliding glass doors leading to the two bedrooms; the other side opens onto the living area, a single space containing the kitchen, dining room and living room, the only separating element being a floor-to-ceiling volume containing utilities and the elevator shaft. This part of the house overlooks a second patio, bigger than the first, jutting out over the garden on the southwest side: the floor-to-ceiling windows which appear throughout this level encourage interaction of the inside of the home with the garden, the buildings around it and the hills and forest on the other side.
The block in the middle, covered with large walnut planks, determines routes through the house and dominates the space, contrasting clearly with the soft hues of all the other finishes, from the grey resin floors to the white plastered walls, the white lacquered cabinets and the enamelled ceilings.
The layout thus created is a solution establishing the perfect balance between the home’s natural vocation for intimacy and its attempt to seek dialogue with the landscape around it.
On the outside, the subdivision between the block covered with brick and the block simply covered with plaster has been maintained, while ensuring the appropriate continuity by covering all the walls with grey paint, underlining the new dark aluminium sunbreaks and window frames. 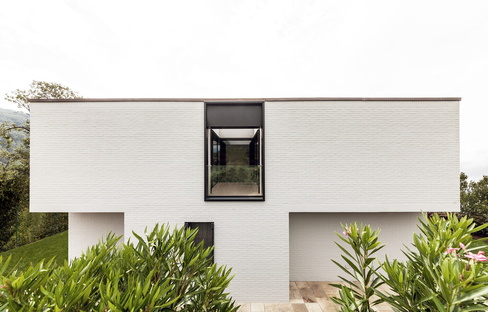 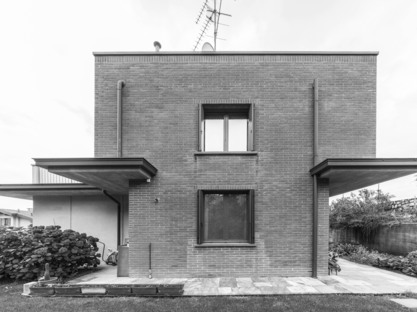 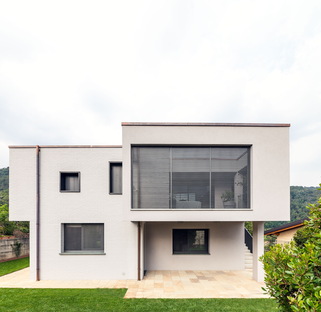 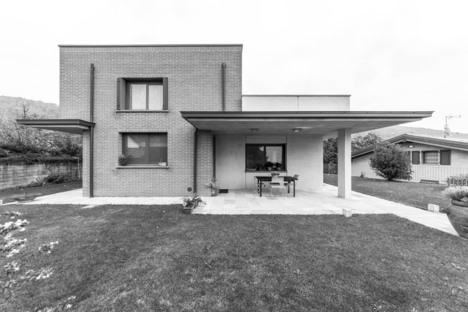 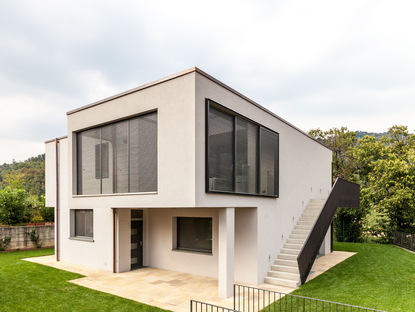 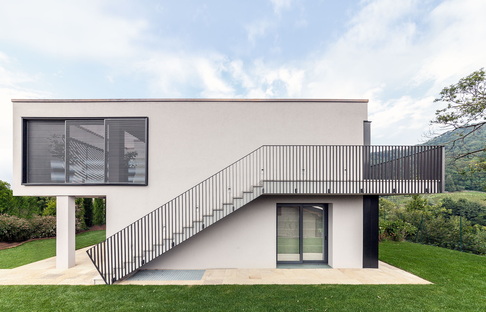 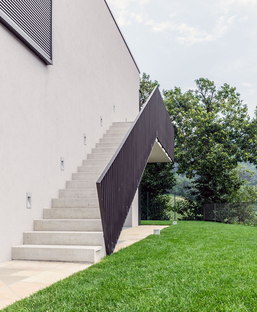 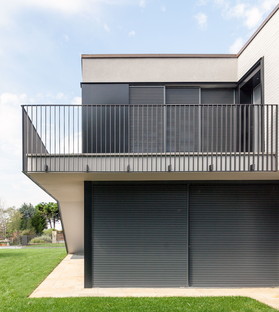 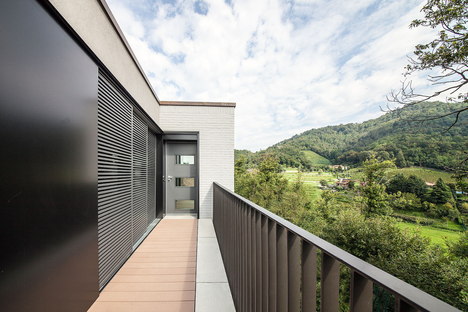 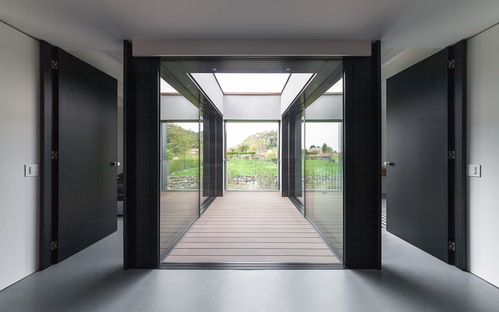 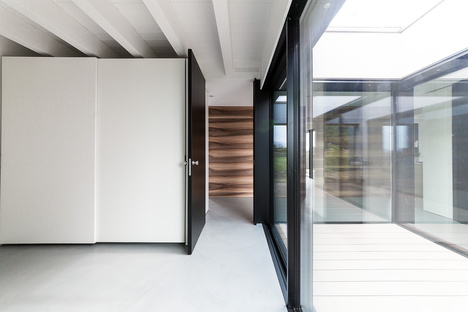 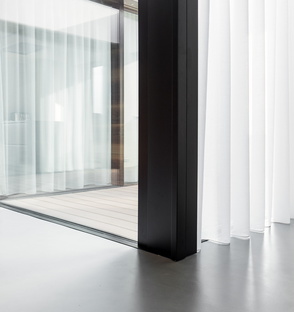 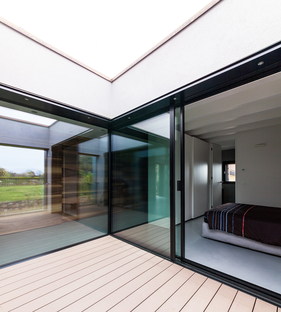 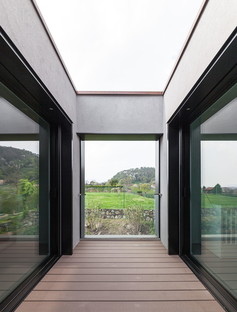 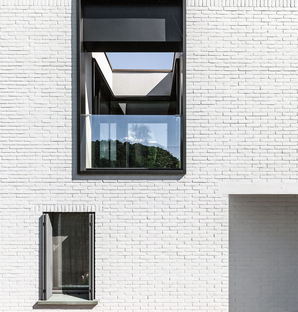 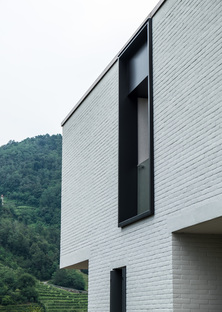 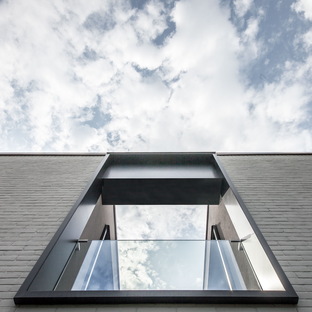 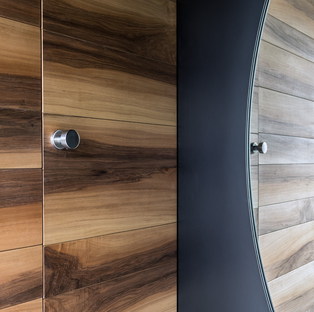 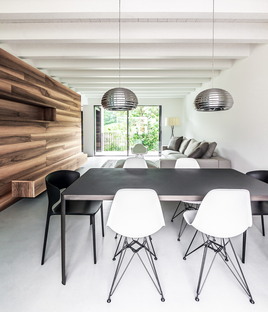 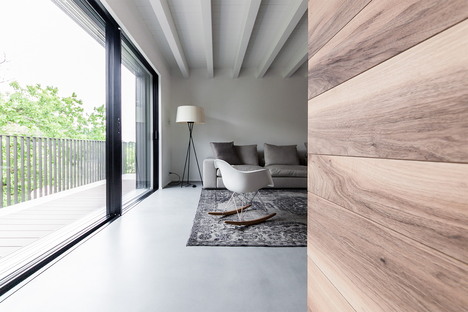 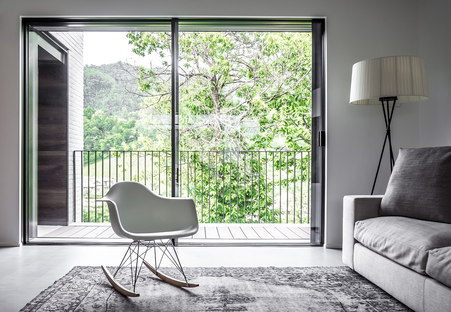 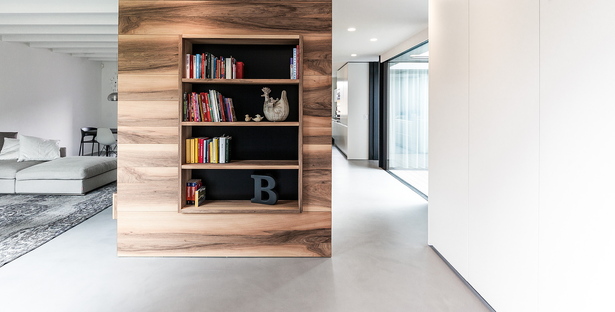 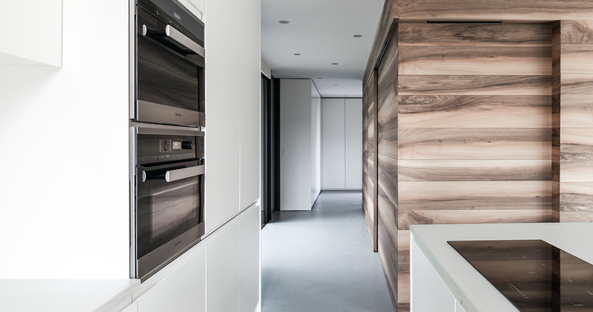 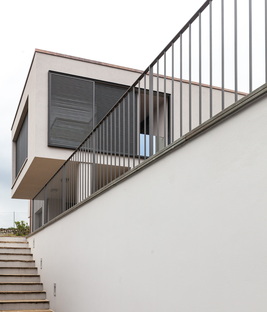 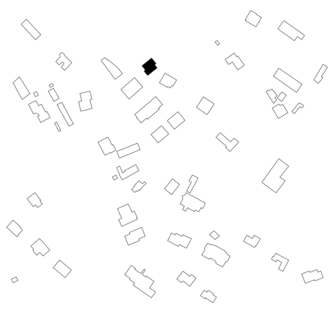 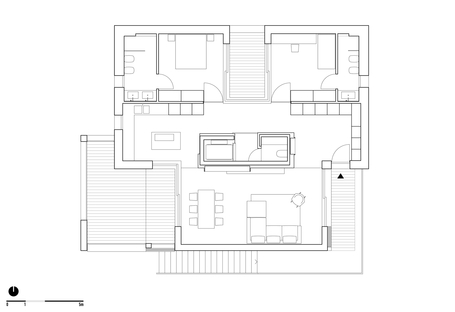