The new Tiundaskolan in Uppsala, Sweden, is a compendium of educational programmes and cutting-edge technologies. The architecture of C.F. Møller Architects expresses a sense of community in a simple yet attractive prefabricated structure. The new Tiundaskolan offers a modern image of the institution. 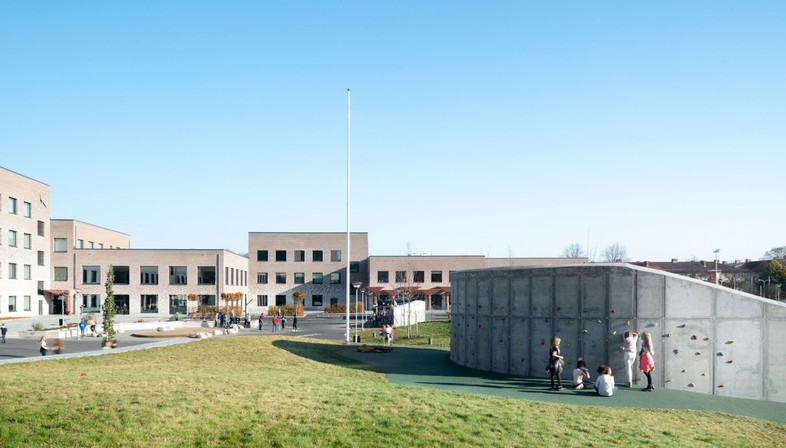 C.F. Møller, the major Danish firm founded in 1924 which now employs 300 people at seven locations across Europe, recently added the new Tiundaskolan in Uppsala, Sweden, to its long list of works on large public complexes. The original building of the Tiunda school, an institute that educates children from kindergarten level up to the age of 13, had become inadequate for accommodate the ever-growing number of students it was admitting. As a result, the City of Uppsala had commissioned C.F. Møller to demolish it and construct in its place a new building project, more modern from every point of view: educational, functional, technological and energy. The ambitious plan by the Skolfastigheter, a city-owned real estate company that manages most of the city’s educational facilities - including kindergartens as well as primary and secondary schools - is designed for a user base of 900 pupils and 144 preschool-aged children. As the designers have repeatedly pointed out, the requirements for the new architecture were that it be attractive, safe and accessible to all. Thanks to numerous awards, C.F. Møller’s work is now widely known for its high standards in terms of direction of efficiency.
In this, as in other projects for large numbers of users, the designers maximise the simplicity of the formal structure in order to reduce costs and turnaround times. Vast rooms with large and regular windows, obtained by assembling prefabricated panels, make for a robust and durable container ready to be embellished with interiors and furnishings inspired by variation and flexibility.
The plan of the building is divided into 9 nearly-identical squares. The corresponding blocks are arranged in an L shape around a large courtyard equipped with several fields for outdoor activities, ending with the sports hall - also newly-built - in the south corner. Each block appears to be a standalone element, as each one differs in terms of number of floors and alignment with those either side. However, the red-and-white brick cladding, inspired by a pixelated surface that fragments from top to bottom, and that extends along all the façades of the blocks, creates the image of a unified body.
The interior design is decidedly avant-garde. A shared space on the ground floor combines a bistro, a square, a staircase that becomes an amphitheatre and a variety of shared learning areas. This offers ample space to develop a sense of community and pride in the school. The layout then eliminates the traditional series of classrooms which are identical in shape and size, communicating with corridors, and instead subdivides the space into sectors, corresponding to the external blocks, with similar classrooms, which identify a specific educational area or a series of related laboratory activities.
Each ‘arena’, as these new internal shared rooms have been dubbed, is set up for flexible working, is a playful space, stimulates social contact, and inspires a sense of safety and protection for younger children.
This type of spatial solution was developed by C.F. Møller in collaboration with school building expert Anna Törnqvist, who proposed questioning the traditional requirement of a classroom for each class of 25-30 students. By enhancing the coordination between subjects and educational supports, it was possible to overcome the single-pair identification between function and classroom, resulting in each space being used for different activities by different groups of pupils, throughout most of the school day.
Based on the premise that it is neither rational nor sustainable to build on a larger scale than necessary, the firms collaborated in order to optimise the use of space, thus managing to significantly reduce the quantities compared to the first project.
Even though it can accommodate over 1000 individuals, the school decided at the time to stop admissions at 800 student so as to allow it to accommodate temporary periods of high attendance. Certain choices are a testimony to the history of the site. The brick façades are still visible on many of the city’s residential and public buildings and are particularly redolent of the façades of the old site, now demolished. The interior walls of the new main building have been adorned with brick works of art by Ingrid Atterberg made in 1962, when the original school was built. Now, a new series of installations has been created by the artists Erika Lövqvist, Jenny Nolstam and Anton Alvarez. Alvarez has built the Clay Trees, a series of phytomorphic portals at the entrances which, in addition to marking out the thresholds of the building, offer a place to rest and meet on the large courtyard.
Finally, from an environmental point of view, numerous technological systems have been installed and combined together, such as a daylight control system that regulates the artificial lighting. The ventilation is controlled with carbon dioxide meters and presence sensors for responsible energy consumption and good indoor air quality.
It is estimated that the solar power system on the roof produces about 12% of the school’s total energy requirements for the year. So as to create a more uniform energy consumption, the city of Uppsala was the first in the Scandinavian countries to have adopted a saltwater deposit at the Tiundaskolan for the storage of energy on a large scale. It is an alternative to lithium batteries, which can be dangerous to people and the extraction of which is not considered sustainable. 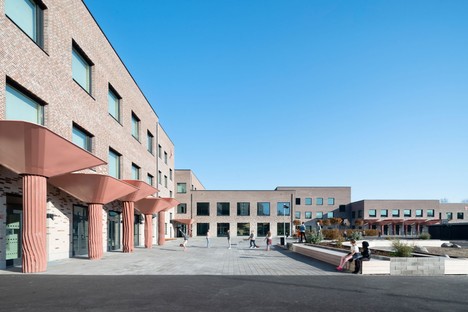 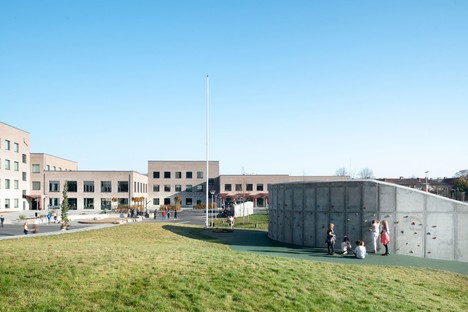 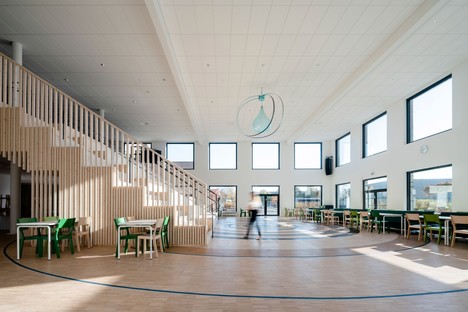 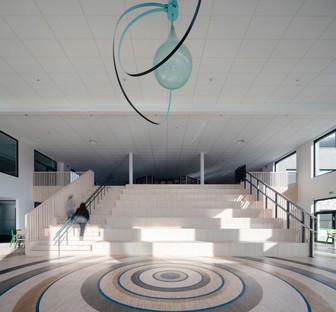 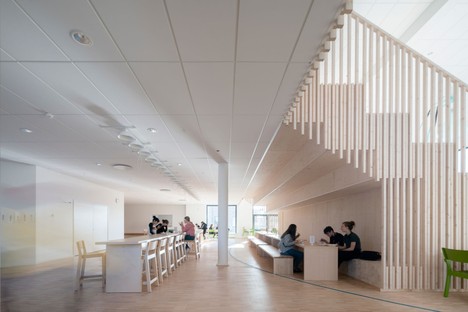 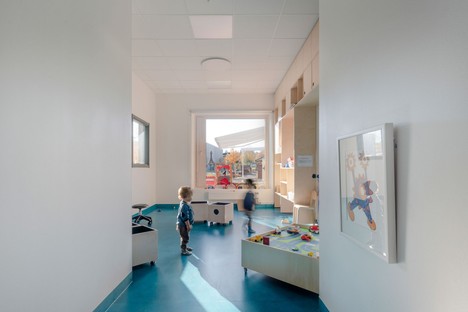 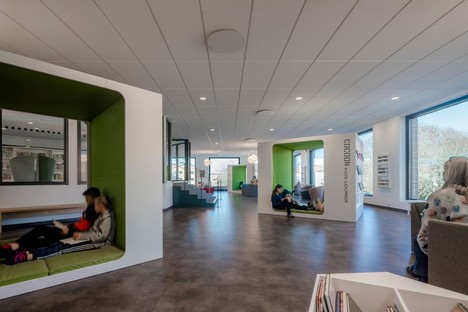 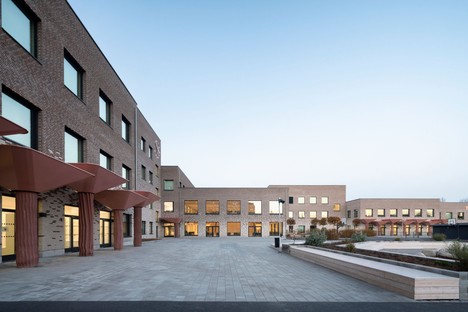 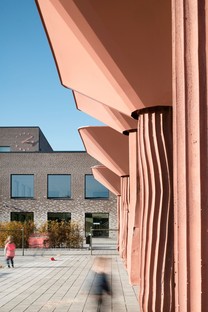 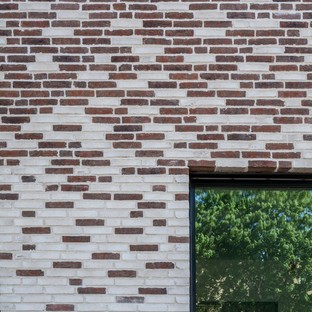 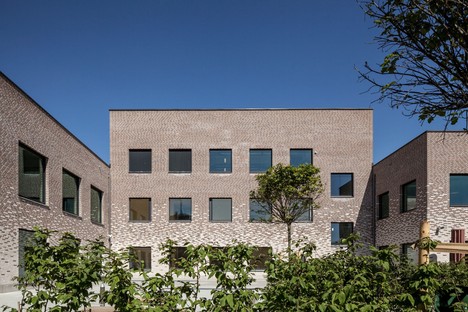 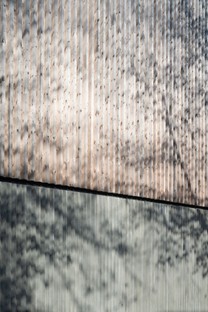 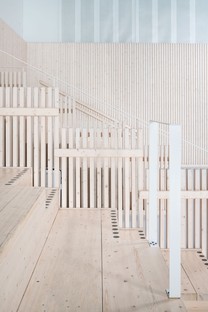 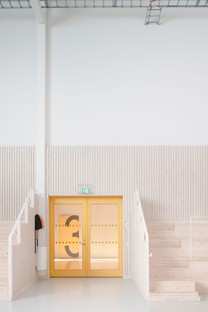 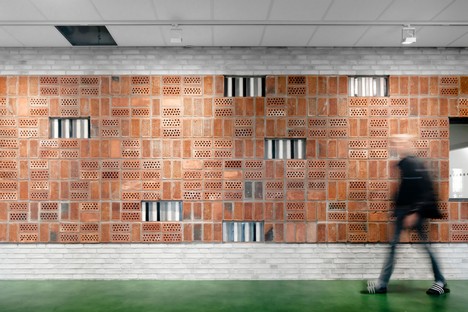 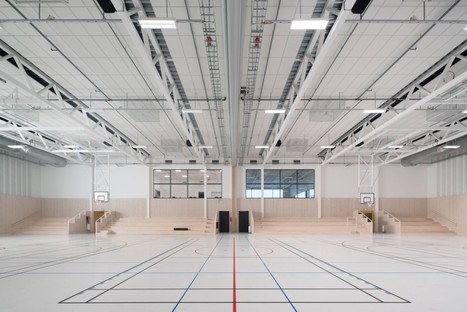 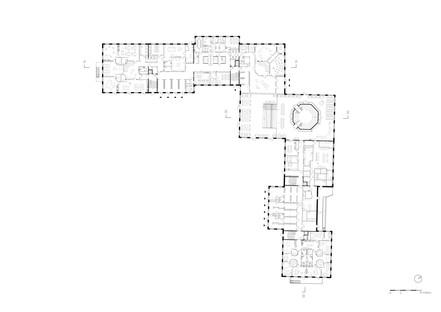 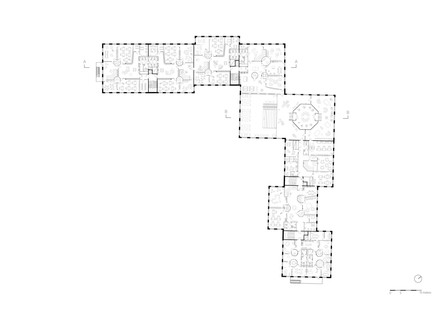 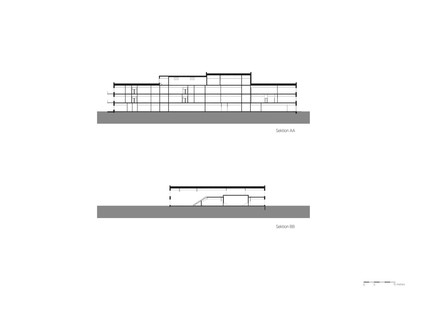 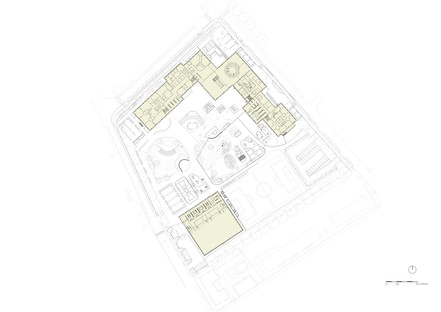 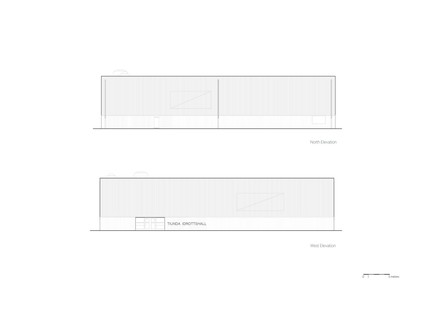 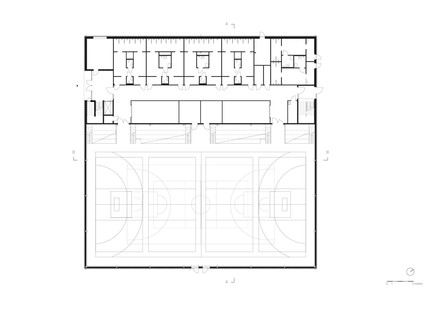 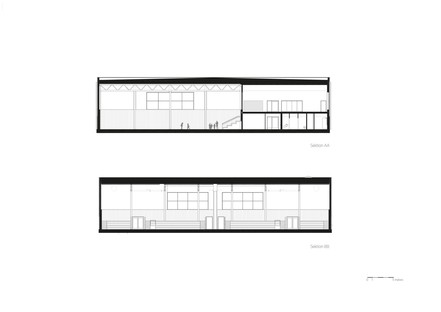