Architects Michel Carlana, Luca Mezzalira and Curzio Pentimalli of architectural practice Carlana Mezzalira Pentimalli designed the New Civic Library in the heart of the historic centre of Brixen. For this cultural landmark of importance for the whole Isarco Valley, the architects designed a contemporary space that reinforces local cultural identity and instils a strong sense of social cohesion. 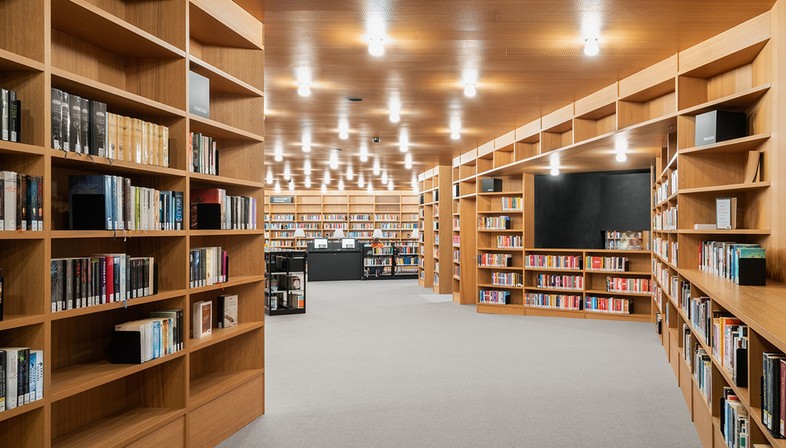 “ This is not a library intended as a large container of books – quite the opposite. It is a project deeply rooted in its context, designed to welcome and generate human relationships and exchanges, intertwining cultures, practices and people of different ages,” is how architects Michel Carlana, Luca Mezzalira and Curzio Pentimalli describe their New Brixen Civic Library.
Only minutes away from the cathedral in the historic centre of the oldest city in the Tyrol, Carlana Mezzalira Pentimalli architectural practice restored and annexed a number of existing buildings and built a new volume to create a unitary complex housing the Civic Library and its precious collections while reinforcing local cultural identity and instilling a strong sense of social cohesion in the community.

The project is located to the south of the former courthouse, occupying an empty space created by the demolition of a building owned by the diocese, extending to include the former finance buildings, the first two floors of the former courthouse and, lastly, a part of the ground floor and first floor of the former prison, and also redefines a number of outdoor spaces. In this rich, dense urban fabric, the newly built volume provides a link ideally taking the form of a tree with its branches resting on the existing buildings. The slight slopes incorporated in this solution overcome the differences in level between the existing buildings to connect their interiors. Inspired by the vision of a tree, the architects name the project “Kulturbaum, the tree of culture” and apply the same analogy to the building’s laying, working around the idea of a “cortex”. As the library had to be a flexible contemporary space, easily adaptable to future requirements, the architects created a double shell around its perimeter, between the outer walls of concrete and the wooden panelling that covers the interiors. This space contains all the service spaces, from the toilets to the vertical links and all the furniture required by the library, such as bookshelves, benches, tables, and so on.
The most striking feature of the complex when seen from the outside is the clean, pared-down lines of the new construction, which connects with the existing buildings around it to create the profound symbiosis between old and new that characterises the project. This result is achieved by taking great care with every little detail, designing and planning very view to govern the great geometric and volumetric complexity of the new Civic Library and establishing a close relationship between the building and its context. 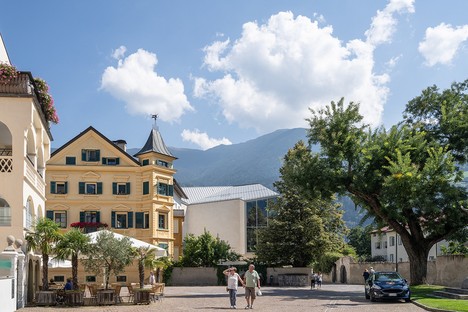 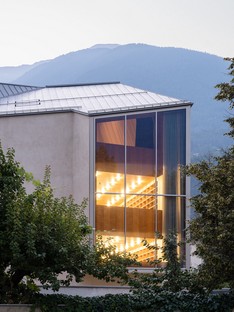 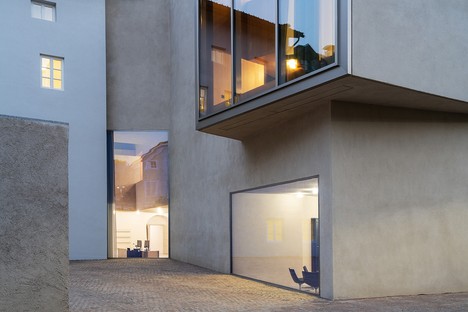 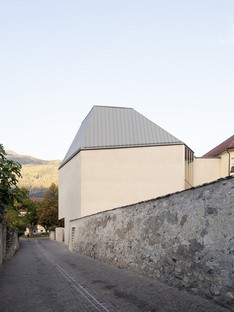 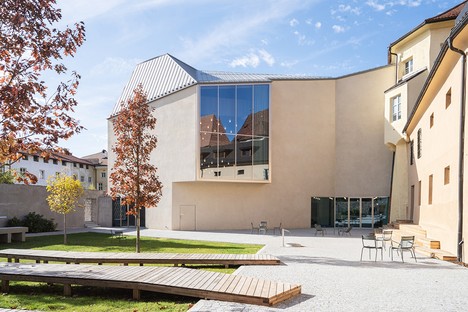 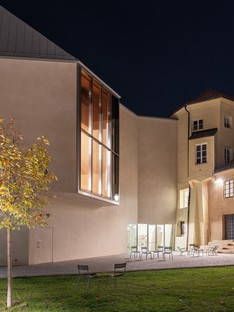 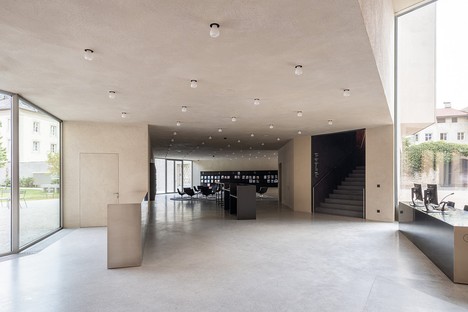 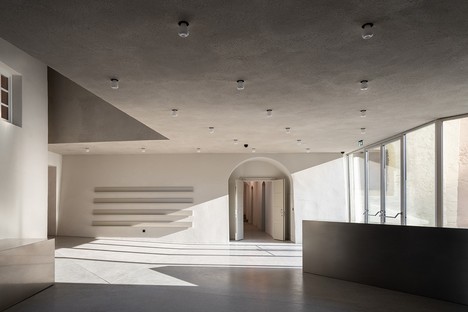 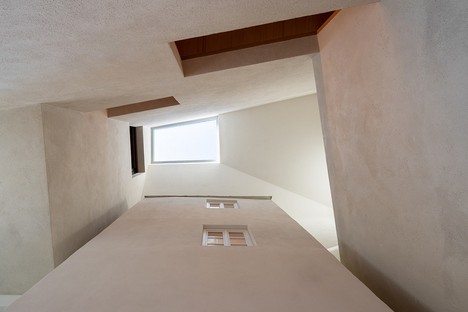 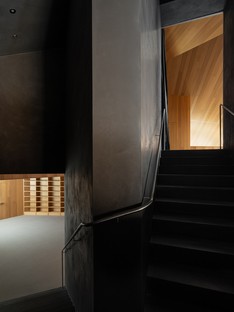 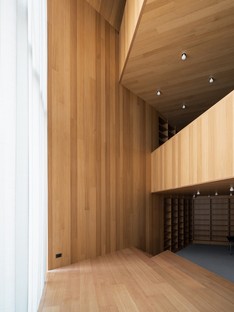 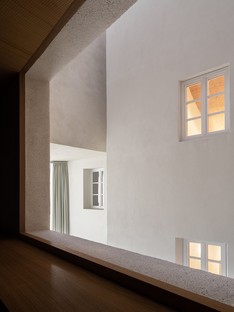 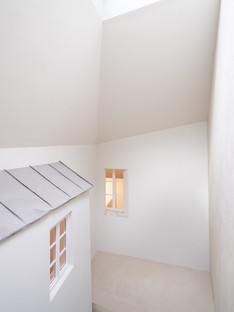 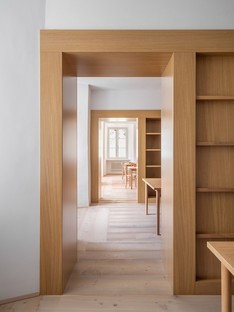 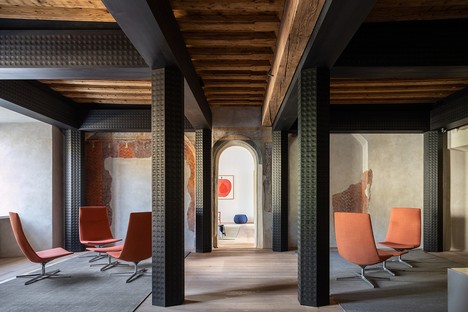 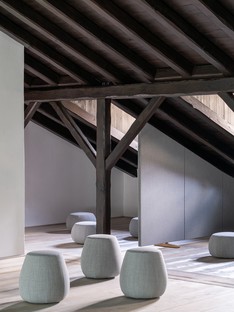 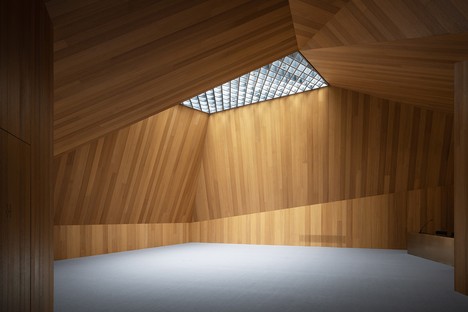 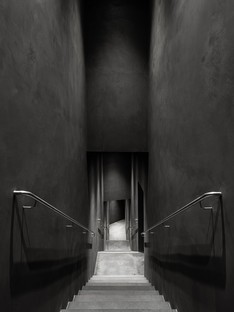 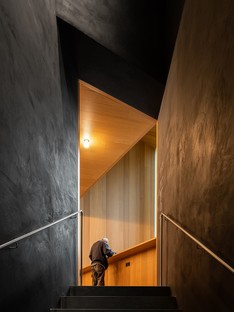 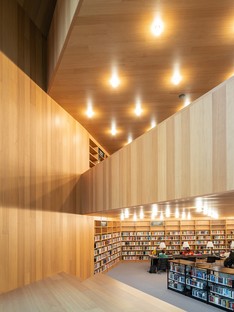 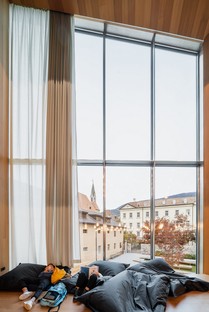