Seeking to combine a Portuguese essence with a modernist feel, Daniel Zamarbide from architecture firm Bureau has designed Dodged House - the renovation of a four-floor apartment - for his family in the neighbourhood of Mouraria, Lisbon. 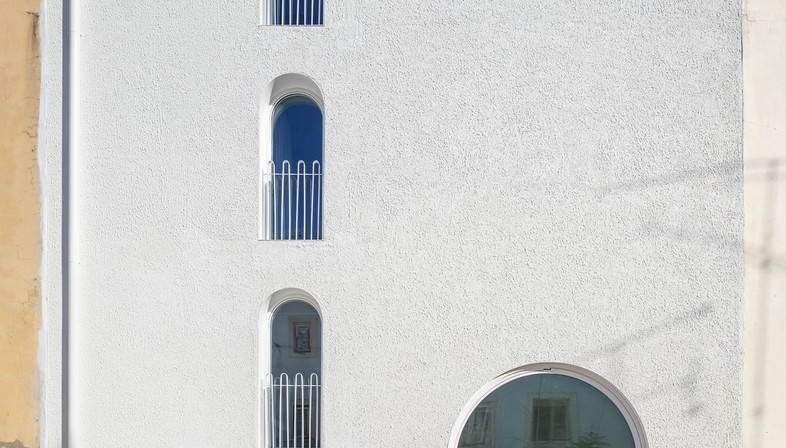 Portuguese architect Daniel Zamarbide of Bureau opens his account of the renovation of his Lisbon home with a reflection on the recent evolution of the property market in Portugal’s major cities. His personal project - dubbed ‘Dodged House’, a home for his family in the Mouraria area - is a personal reaction of sorts to the common style.
We previously mentioned this some time ago when talking about the renovation of another residential building in the Belém district of Lisbon: in recent years, the city has seen a surge in property speculation sparked by the liberalisation of rent prices. What’s more, considering the fact that Lisbon has also seen a marked uptick in the number of abandoned sites since the 2008 property crisis, it is easy to understand how investors nostalgic for that romantic feel of the Mediterranean - as Daniel Zamarbide himself puts it - were able to invade the city with the intention of restoring historic spaces in the city centre in order to turn a profit.
As such, façades revived with splashes of bright colour have managed to conceal clumsy renovations, often failing to provide any true quality of living, designed as they are for short-term use by weekenders. These houses with no eyes, or with their eyes closed - as Zamarbide calls them - which the owners lacked the funds to redevelop properly, have suddenly awoken with their eyes bright and gleaming, becoming highly marketable and ready to feed an increasingly aggressive flow of tourism.
Aware of the historic value of the buildings in the Mouraria, Daniel Zamarbide decided to take his renovation in a different direction, instead capitalising on its vertical development and introspective character. Inspired by the atypical modernism of Irving Gill, Bureau has favoured bare functions, aestheticising them and interweaving humble materials with extremely luxurious ones, always opting for empty space over space that is occupied and carefully planned out.
Dodged House is located on Rua do Terreirino on a site of about a hundred square metres, around half of which is occupied by the building itself, with the other half forming a typical Mediterranean courtyard of mosaic pebbles, with boundary walls. The façade overlooking the street, facing north, has been restored but without opening up any of the existing infills, leaving only traces of old openings that no longer correspond in any way to the actual organisation of the interior space. The more private south-facing façade, meanwhile, overlooks the small courtyard, opening up four new vertically aligned vaulted windows that mark the regular rhythm of the floors, along with a large pivoting glass door, offering a certain solemnity to a building which bears no apparent distinguishing features. White dominates everywhere, thanks to a plaster that reacts strongly to the intense sunlight in Portugal. The details, few and far between - such as the delicate white railings on the windows - conceal a surprising interior space, designed from the sectional perspective.
The architect/client has constructed three self-supporting projecting slabs which increase in length from bottom to top, forming upside-down terraces with glass filler panels between one slab and the next. From the ground floor looking up, it is possible to see the entire house in a single glance, giving you an idea of its considerable overall volume as it stretches all the way up to the 12m-high pitched roof.
The Dodged House could be described as a contemplative void in which the rooms have been hung on the walls.
Just below the roof, a vaulted window has been opened on the north façade - the only one on that side - so as to better illuminate the upper floors. The white ceramic covering used then gently diffuses the light down to the ground floor.
Here, the shared living space has been organised by a long central peninsula separating the kitchen from the lounge, which is located right in front of the pivoting window and thus seems to yearn to extend all the way out into the courtyard. As you climb the spiral staircase, you will find the two en-suite bedrooms, each with a large desk “with a view”, whilst the top floor is a flexible loft space to be used as a study, a library, or even a thinking spot.
Minimalistic furnishings, metal pipes for the structures - all of which are exposed, along with the systems - smooth surfaces, doorless shelving units: everything comes together to convey an aesthetic choice that lays bare life and all its developments in a “living machine” post litteram. White is the colour that covers the entire home, standardising and further minimalising the design in favour of space. This is contrasted by the only luxurious elements, the marble tables that stretch across the entire width of the house, providing a rationalist solution as they transform from writing desks into washbasin surfaces. As such, the space is not fixed or determined, but instead capable of adapting to different purposes and functions. It is shared - as it all overlooks one large room - but also private, as each floor is an independent, self-enclosed living unit.
Unexpected and multifaceted, this apartment is deceptive - as the name itself suggests - hiding behind a main façade “with its eyes closed” and distancing itself from the more common architecture currently fashionable in Lisbon. 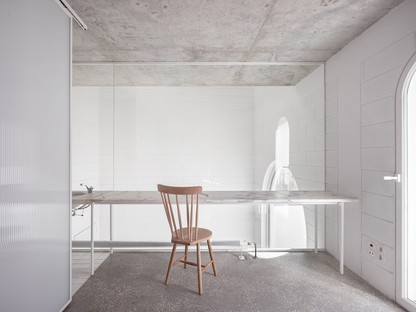 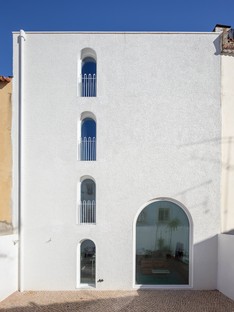 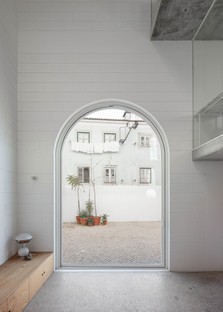 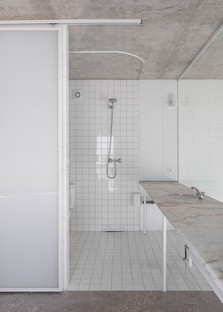 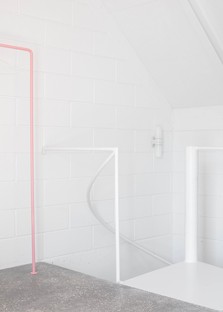 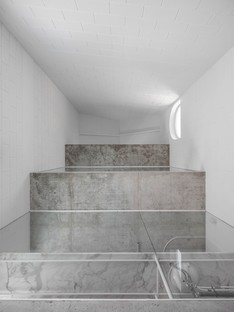 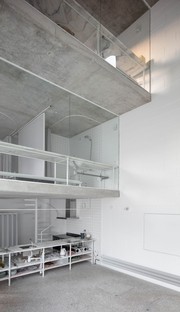 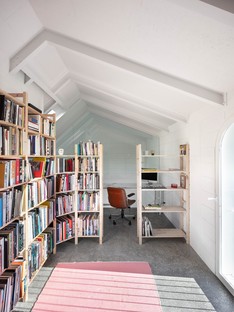 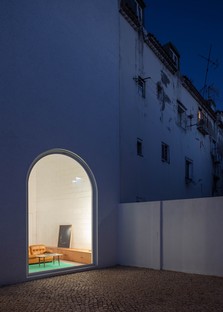 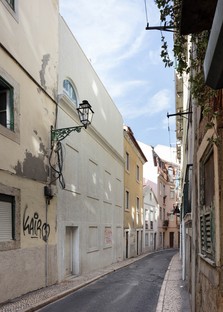 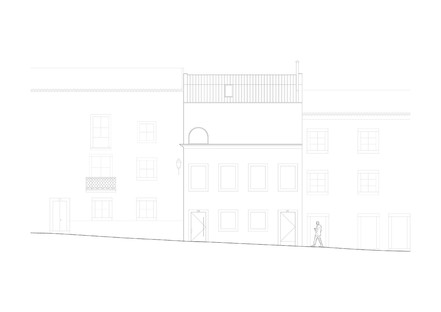 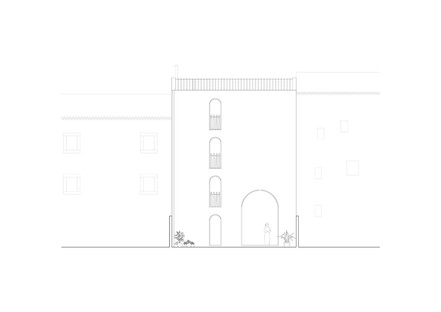 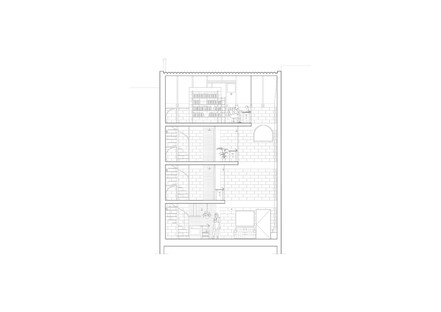 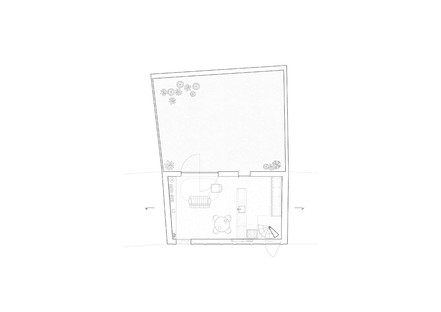 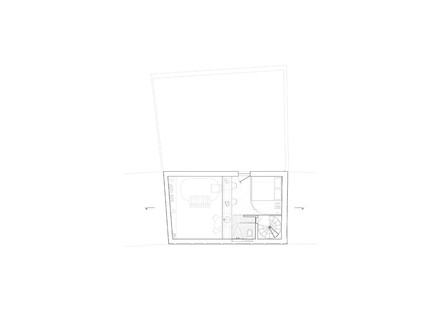 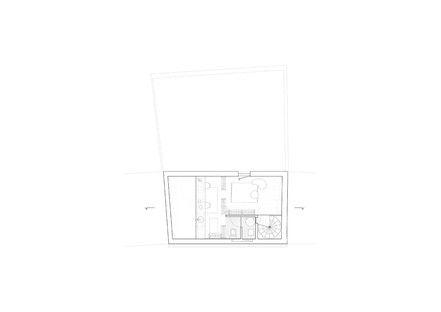 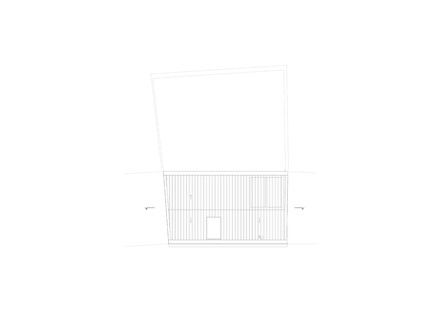