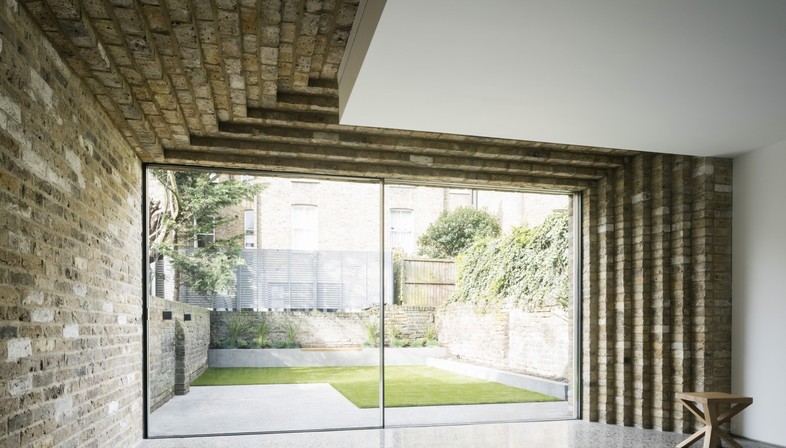 Bureau de Change, the London firm founded by Katerina Dionysopoulou and Billy Mavropoulos, addresses the issue of renovating an original early 20th-century terraced house in London to adapt it to the modern comfort standards and a contemporary lifestyle.
Now known as Step house, in obvious reference to the element of the stepped extension that characterised the renovation, the project by Bureau de Change in Hampstead, London declares its belonging to a process of reflection on the ‘soft’ parameters (ventilation, natural light, colours, etc.) of the house, implemented by Katerina Dionysopoulou and Billy Mavropoulos. Going back over their career, still in its early years, we notice that the theme of recovery in historical buildings is often developed in a less than conservative way, usually by evolving the elements which are present with a view to improving the quality of the interior space. In the Folds house, which is also a three-storey terraced house in North London, the rear façade was opened up entirely with a windowed front, so that some part of the Parkland Walk’s beauty could spill over into the house. In that case, the architects added what was to become the central idea of the project, namely a zig-zag roof over a single open-plan living area, ideal for the addition of generous skylights, which flood the living area with light as well as opening the view up skywards.
The Step house and the Folds house are examples of saving certain distinctive aesthetic and structural elements of London’s terraced houses, as requested today by a large number of clients, who are particularly fond of this traditional type of architecture, as well as the new design that acts on other elements to transform the way they are experienced.
The terraced house, an architectural typology present in England since the eighteenth century, provided housing units with uniform fronts and heights, as in this case with front and back gardens. Owned by both the working class and the aristocracy, these houses - usually single-family homes - are part of the urban landscape of London as we have known it since the Industrial Revolution. The shape of the floor plan usually being narrow and long, offering views out of the front and back alone, in addition to the size of the windows, made for rather dark, poorly-ventilated and broken-up interior spaces.The front room was usually a small, rarely-used living room, whilst the more communal kitchen was at the back, with an extension topped with a terrace and access to the back garden, which, for space reasons, was used by many families as an outdoor storage area.
In this terraced house made from original early twentieth-century bricks, the renovation works reversed the floor plan of the ground floor, swapping the location of the two living areas, thereby placing the kitchen near the entrance the the living room at the back, overlooking the back garden. Whilst the traditional narrow, blind corridor that once ran directly from the entrance to the back room has been restructured, the room that is now the kitchen reclaims and exploits the sheer size and light of the bow window which gives onto the front garden. Its size also allows for insertion of a kitchen island which, together with the wall units on the sides, offers the room a dimension of circularity and implicit conviviality. A sliding door gives direct access to the dining area, in the middle of the floor plan and illuminated in particular by the indirect light of a patio. Beyond the well of light, the living room opens up, making use of the extension to stretch into the back garden and allow us to see beyond a new full-height window.
Here, the brick takes on a sculptural value it that rarely had over the course of the history of London’s terraced houses. From a fairly humble and particularly widespread traditional construction material, the brick has been transformed into a repeated module with a decorative value which involves both the ceiling and the wall in an apparent wave of motion. The top and side lines rise up and stretch out, as if to break through the confines of the room. The beauty of the brick wall being reclaimed and designed in this way elevates the room to a representative space, the true heart of the house, whilst the outside is a sign of a changed living experience in the terraced house.
Billy Mavropoulos talks about their work in close contact with engineers to create an interior space completely free of load-bearing columns: “The structure was achieved using laser-cut, double direction, stepped beams that give the sensation that the brick addition is floating.” 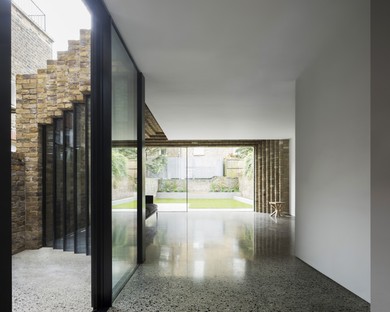 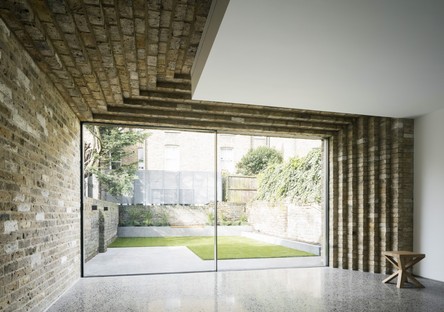 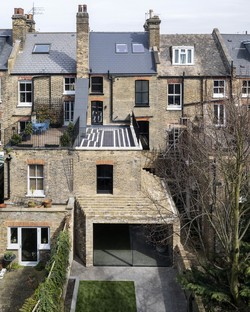 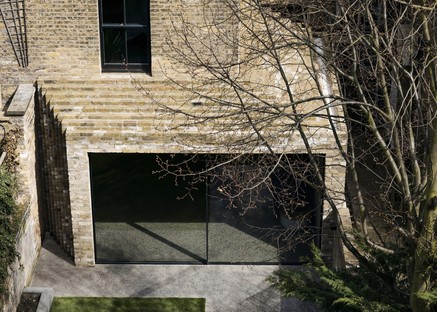 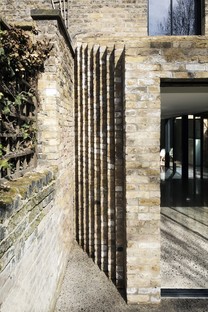 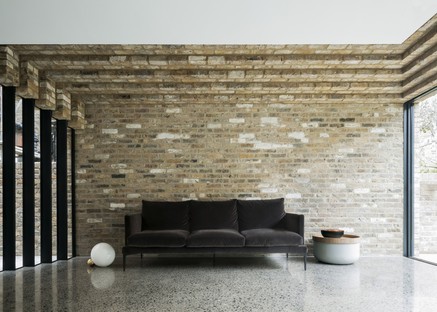 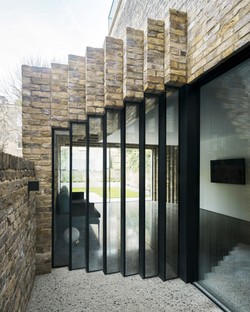 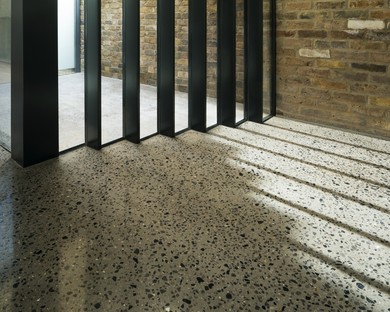 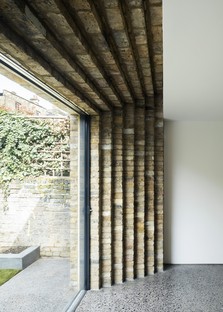 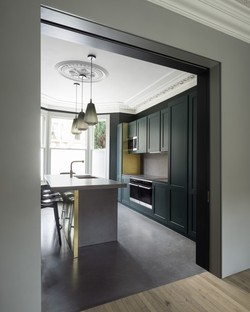 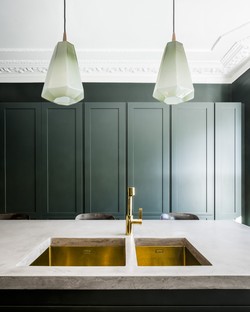 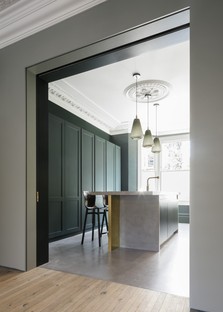 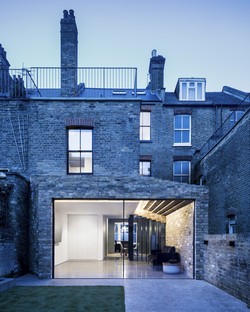 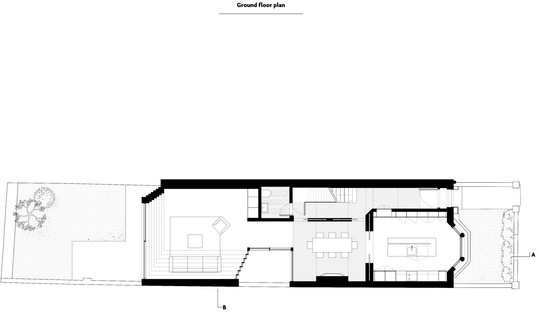 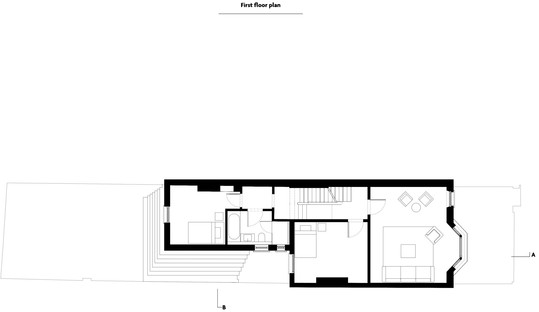 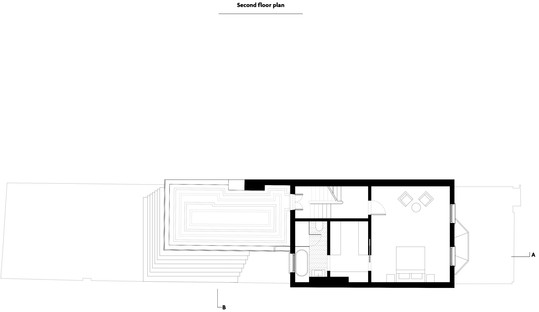 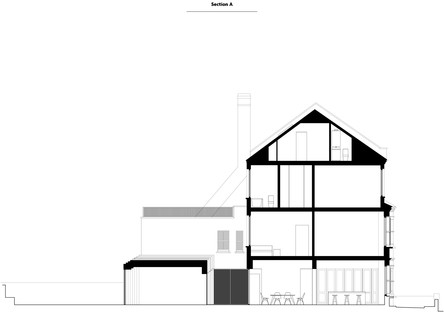 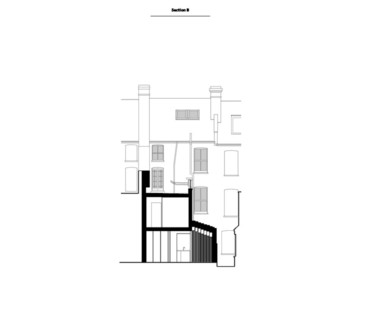 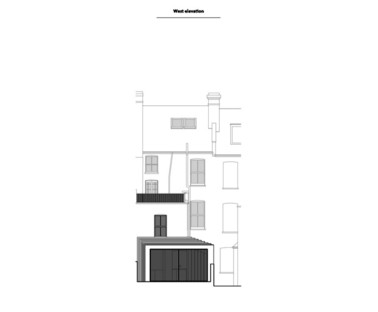 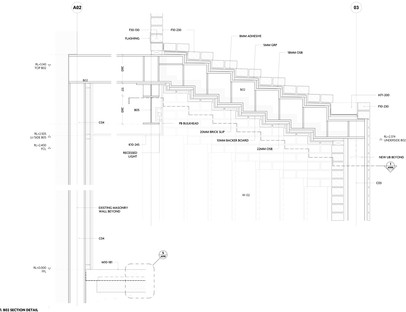 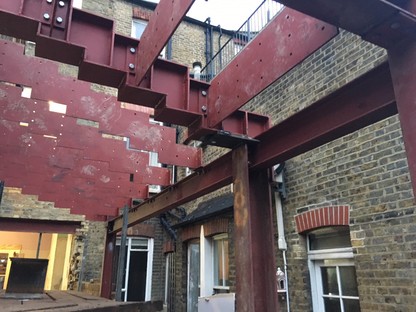