Bureau de Change converted two traditional British chicken sheds on the Cotswolds Hills into the Long House. Katerina Dionysopoulou and Billy Mavropoulos worked on this archetypal construction, coming up with new uses and treatments for wood and stone to update local traditional constructions. 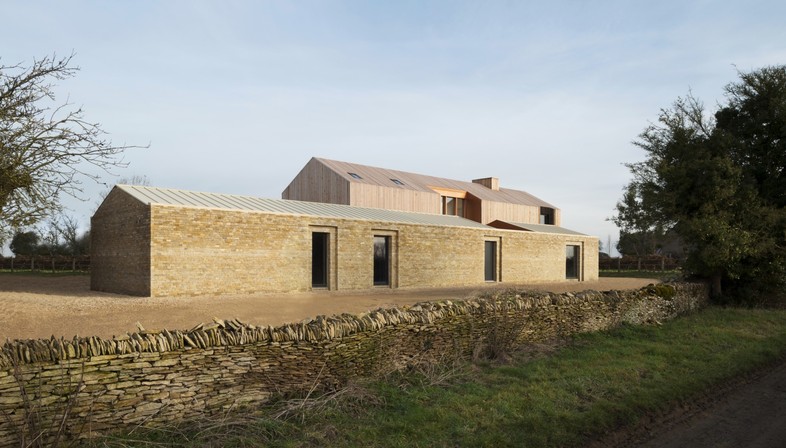 Katerina Dionysopoulou and Billy Mavropoulos, founders of Bureau de Change, were appointed by private clients to convert their chicken sheds in the British countryside into a new home. The two London architects completed the Long House in 2019.
The landscape in which the chicken sheds stand is the Cotswold Hills, a popular hilly area west of the town of Oxford which was declared an Area of Outstanding Natural Beauty in the United Kingdom in 1966.
Located on a quiet lane in the village of Ampney St Mary, these traditional low wooden buildings 30 metres long stood in a large farmyard where the chickens roamed, fenced in by dry stone walls. The walls are in perfect condition, splendid examples of a local construction technique which the architects also adopted in the construction of the new home.
Bureau de Change adopts an unusual approach to the historic theme of conservation which we have also seen in the recent renovation of a London terrace house (link to Step House article): the material becomes the focus of attention, reinterpreted in an aesthetic, “theatrical” manner. While the Step House identifies brick as a precious sculptural material that makes the most of the space in the home, in this project the ordinary wooden boards of the chicken sheds are given a prestigious new identity.
??Nothing of the humble chicken shed remains other than their archetypical long, low form with a shed roof, emphasised in the new home. Two different and apparently separate blocks form a single interior, with the living area to the east and a studio and service areas to the west. The need to divide the semi-public spaces from the workspace and the private part of the home drove the architects to add motion to the three-dimensional form of the complex, and so a part of the second volume is interrupted to form an annex and create a courtyard separating the owner’s living area from the guest rooms. The building at the back towers above the first, providing a separate and more private level for the bedroom area. Where the two gables touch, the project opens onto a big glassed-in patio, hidden behind the southern wall, with a private garden separating the living room and kitchen from the studio.
Both floors are of interest, as the patio is the centre of attention of the home: it collects light and air, and, while only accessible from inside the home, provides privileged views over the landscape.
This formal dynamism is confirmed by the covering materials employed in the project. Stone laid without mortar by a local craftsman in the front volume recalls the original dry-stone walls preserved on the site. Great care has been taken in the design and laying of the stone, a sign of attention toward a vernacular culture that still attracts a lot of interest in the area. On the contrary, the volume at the back, where the annex is, is covered with strips of natural larch wood, set at a distance from one another. Stone and wood, and the differences in their rhythms, both break up the two solid blocks of the building, mitigating its impact on the landscape and allowing the building to blend into its natural surroundings.
Another detail worth noting is that by the doors on both sides, the larch wood has been carbonised and then brushed so that the window has a more incisive impact on the wall. This is Shou sugi ban, a Japanese technique for waterproofing wood which not only has a dramatic impact but improves the material’s stability and resistance to wear.
The structural choices are based on the principles of the passive house. The buildings are made of concrete, using insulated formworks to prevent thermal bridges; the south-facing walls have smaller windows with triple glazing and a ventilation system that recovers heat while maintaining air quality all year round. 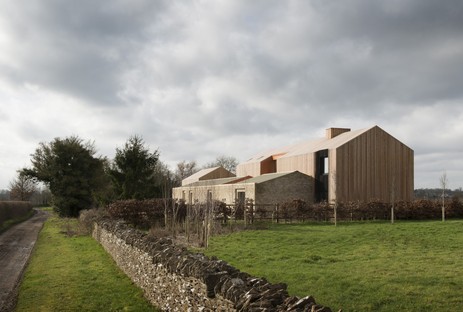 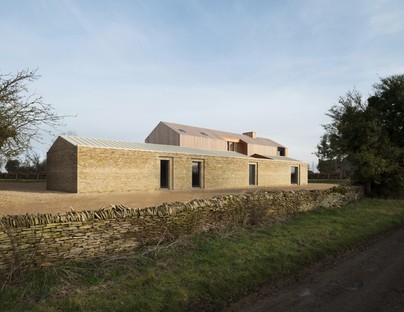 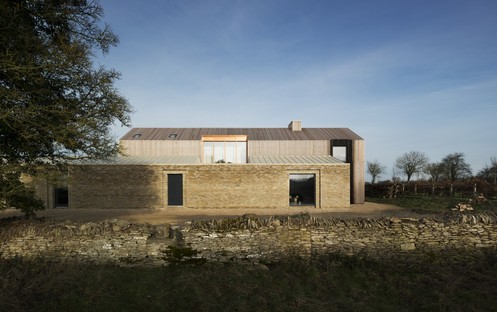 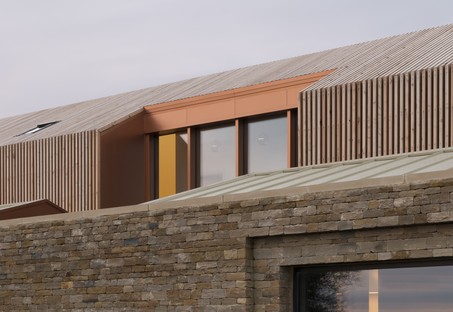 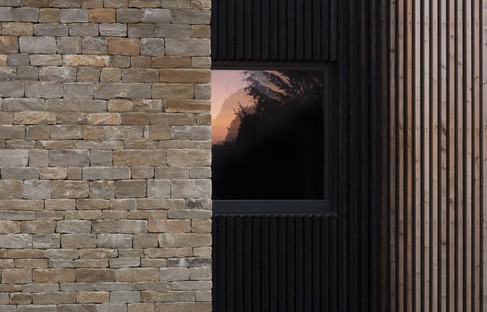 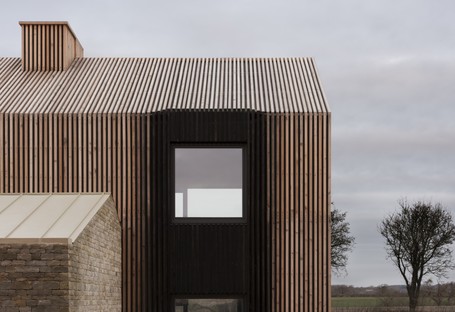 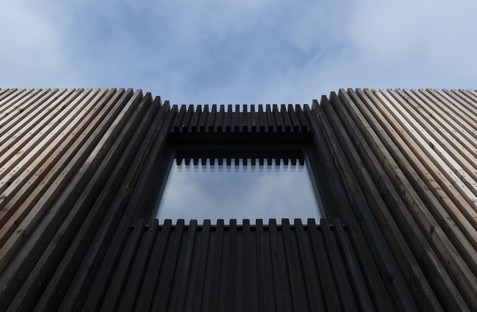 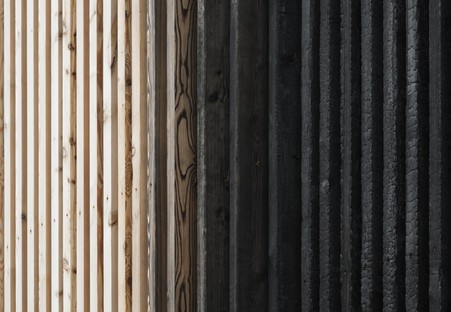 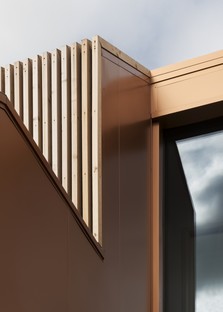 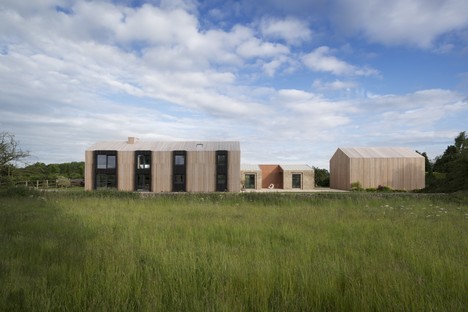 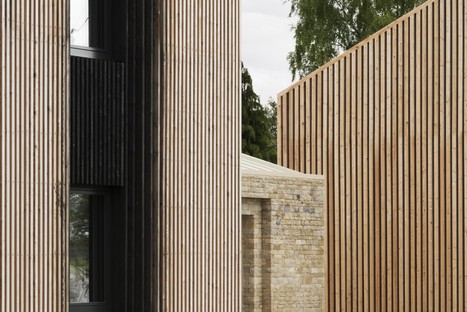 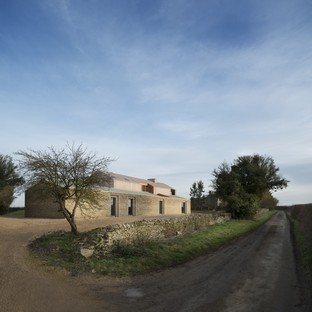 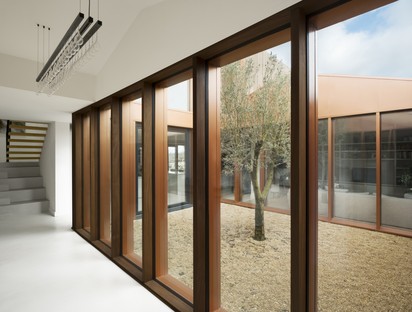 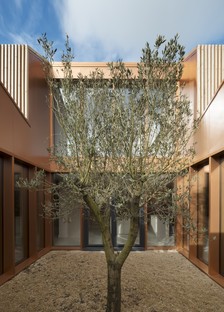 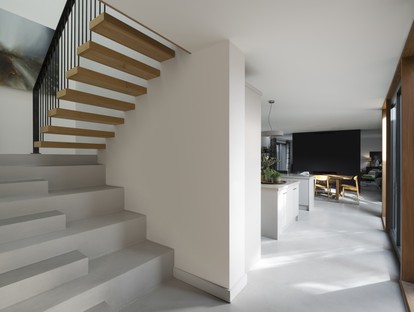 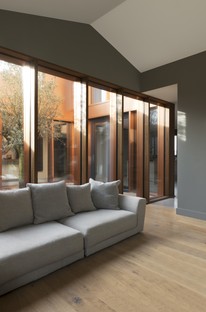 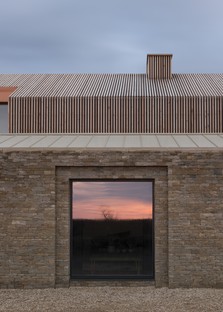 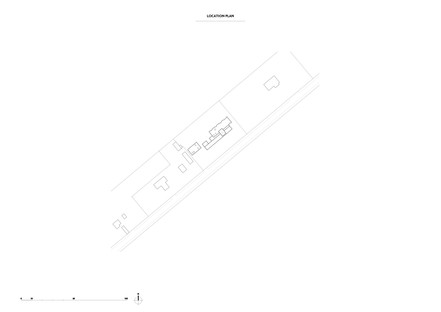 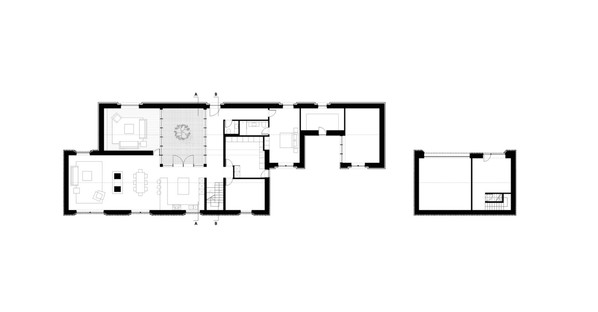 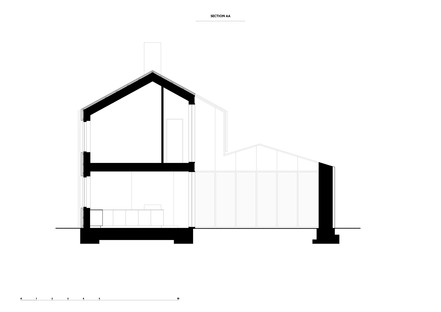 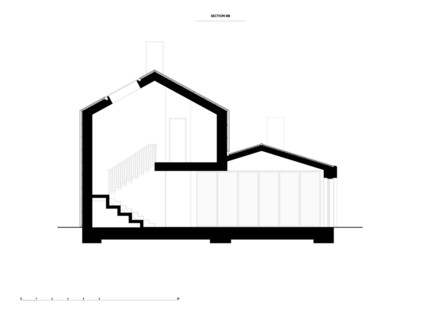