Brenac & Gonzalez & Associés and MOA Architecture each designed a residential tower containing apartments with little offices in the heart of the 18th arrondissement of Paris, as part of La Chapelle International urban development project. 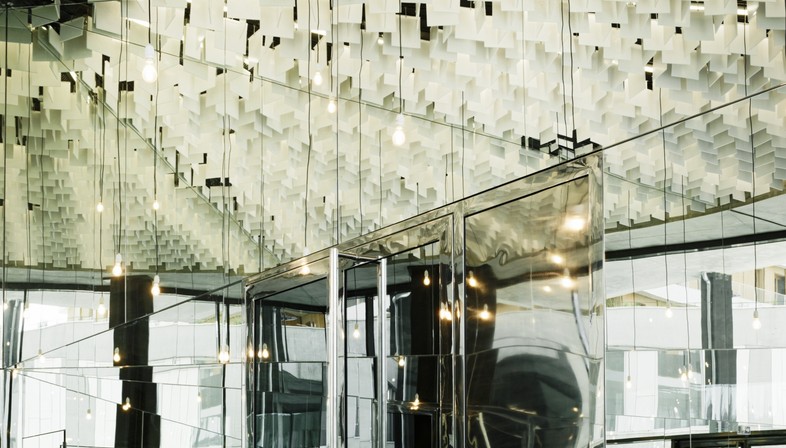 In the heart of Paris’s 18th arrondissement, where “La Chapelle International” urban development and renewal project is under way, Brenac & Gonzalez & Associés and MOA Architecture won a design contest for the construction of two residential highrises on lot E. This part of the area undergoing urban renewal is located on a former railway line on La Chapelle roundabout measuring 4.6 hectares, extending along the Gare du Nord tracks and subdivided into lots: more than 900 residential units of various types will be built, as well as offices, shops, schools and sporting and cultural facilities.
The feature common to all these residential lots, including the projects by Brenac & Gonzalez & Associés and MOA Architecture, is the presence of the "SOHO", which stands for "Small Office, Home Office". Architect Djamel Klouche of AUC, the studio responsible for the overall urban development plan, wanted the first seven metres of each building’s height, and therefore the first two levels, to be a dense, lively urban area ideally recalling the historic vitality of Paris courtyards, revived through the presence of creative artists and professionals such as graphic designers, architects and artists. These are the people the duplexes on the first two floors are intended for, with studios or workshops on the ground floor and lodgings above them. 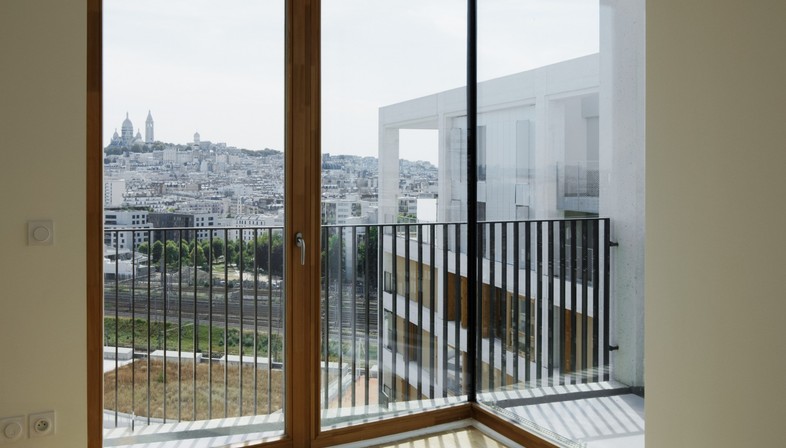 The urban development programme for lot E, assigned to Brenac & Gonzalez & Associés and MOA Architecture, contributes 254 apartments in two towers with 20 SOHO-type commercial spaces in the buildings’ common base. The distinction between the base and the towers is of course reflected in the design of the façades, evoking an active, lively lower town and a residential upper town. This impression is reinforced by an internal road which crosses the SOHO area, dividing it in two lengthwise. The street is meant to be a true public space providing access to the SOHO’s 20 commercial spaces and extending to the entrance of the E2, reinforcing the link between the two residential towers.
The two towers are different, even though they share the same conceptual and chromatic approach. Both architects work on vertical differentiation of the volume, for example; in Brenac & Gonzalez & Associés’ project, tower E1, the volume rises out of its SOHO base, surrounded by balconies up to the 6th floor, which corresponds to the height of the buildings in the city around it. Its upper part, on the other hand, has a white reinforced concrete exostructure that borders and continues its key alignments, even though a cut in the volume of the building makes it look as if it were made up of two slender smaller towers.
Tower E2, designed by MOA Architecture, on the other hand, appears to be composed of two towers placed one above the other. This building also has an exostructure, composed of a light grid of pillars and beams that define and frame the floors. The first part of the building is the “urban tower” aligned with the street, with windows at regular intervals; the second part is the "landscape tower", with walls facing southwest, toward Sacré-Coeur, and floor-to-ceiling windows opening the interior spaces onto the urban landscape of Paris. 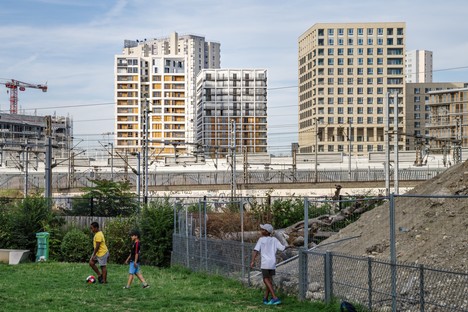 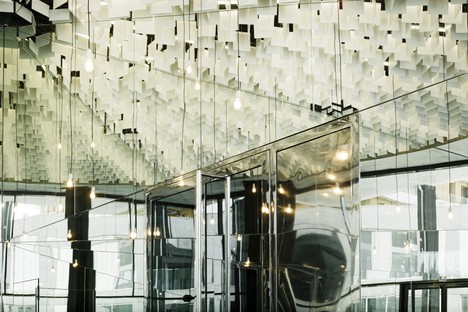 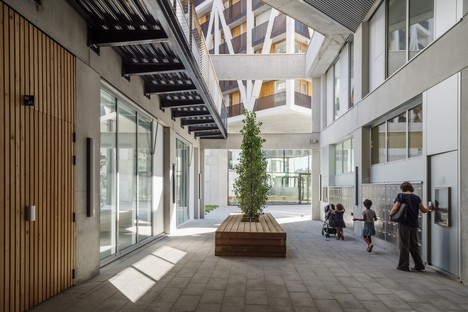 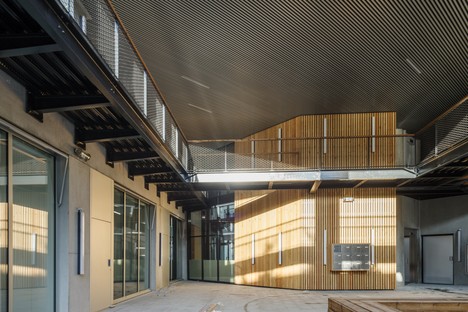 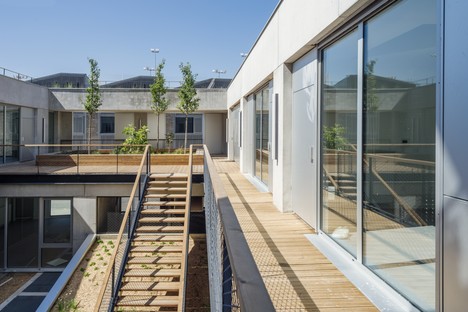 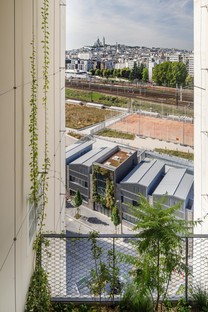 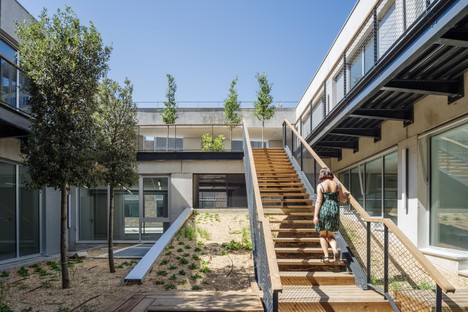 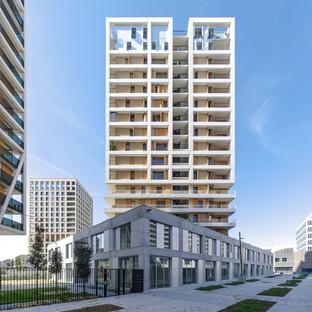 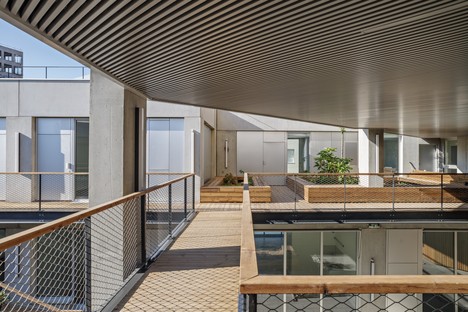 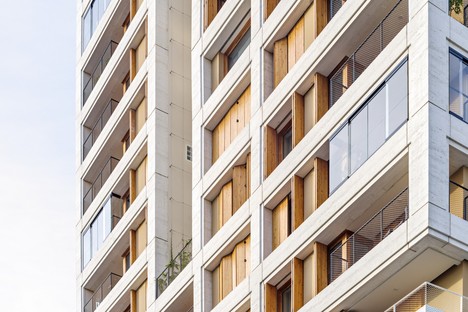 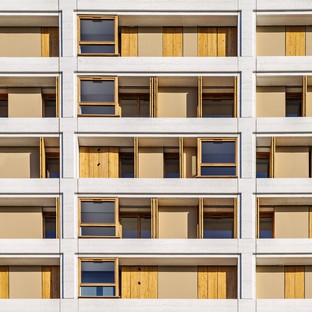 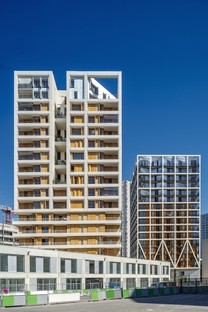 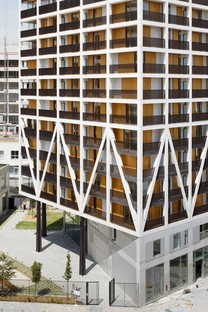 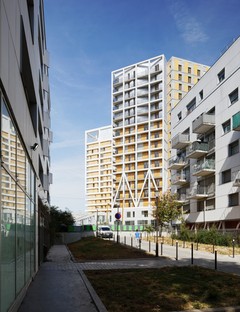 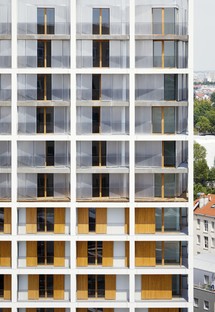 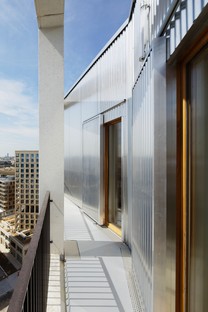 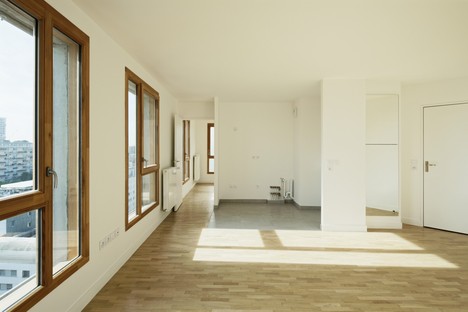 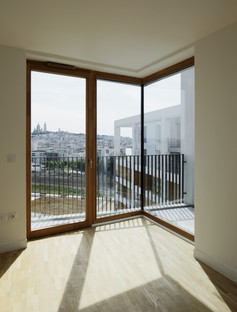 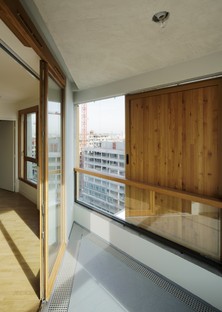 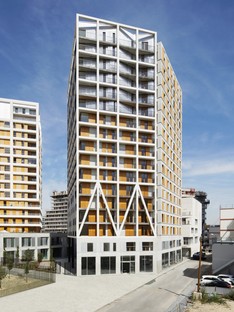