The Chinese architecture firm Various Associates was commissioned with the design of an Art High School in Shenzhen. The School is focused on international arts programmes, affiliated with the Guangzhou Academy of Fine Arts (GAFA). The new campus is the result of the transformation of several abandoned buildings along the river, in an urban village. 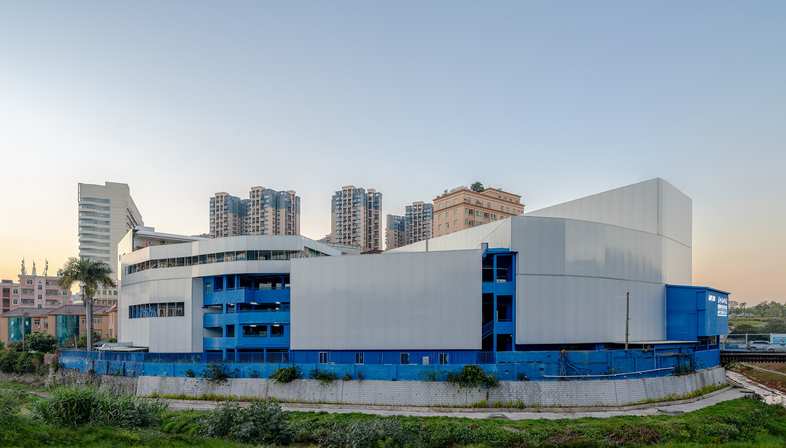 As we have seen in the past, design constraints are often the source of surprising solutions, taking a limitation and transforming it into a design virtue. This is precisely what happened in Shenzhen, where the Various Associates studio was commissioned with the construction of an Art High School in an old, riverside factory. A project characterised by many contingencies, including the low budget, the local construction team appointed by the client, the tight construction timelines due to the planned opening of the school in the autumn semester and the impact of the renovated façades on the neighbourhood.
Indeed, it is precisely the dialogue with the neighbourhood that is at the heart of the project to renovate and regenerate the existing 9,000 m2 building, as the presence of the school, based on the concept of an art factory, would need to infuse the local urban context with new and young energy. As the architects explain in terms of their inspiration and the solutions offered: "As the project is located beside the bend of a watercourse and across the river is a relatively important road, we added new façade languages to the existing buildings by adopting new colours and a simple light-permeable material to envelop the entire complex. In this way, the renovated buildings dialogue with their surroundings with a brand new image, and integrate into the urban fabrics, as well as local culture and life." The polycarbonate sheets used to wrap the façades of the original building in fact are translucent, lightweight, fire resistant and energy saving. The elements were prefabricated in the factory and moved on site for installation, which not only saved costs, but also enhanced the construction efficiency. The new blue wall coatings, combined with the white elements that characterise the volumes, work together to accentuate the silhouette of the new Art High School, which becomes a landmark in the neighbourhood.
The transformation of the old factory also involved the central area enclosed by the buildings, which has been turned into a sports field, while the original underground garage was converted into an open-air sunken auditorium.
As the project concerns an art school, there is never a shortage of beauty or the desire to impress and intrigue. And so we find, incorporated in the new Art High School, a work by the Various Associates studio themselves, created for the DESIGN IN BAY AREA 2020 exhibition at the invitation of the Shenzhen Institute of Interior Design. The installation, entitled "Wave", was created with a focus on sustainability, to help introduce the circular economy into the world of trade fairs through a concept of simple reuse, without wasting resources. The studio thus created modular tables that can be easily adapted to support campus activities and inspire students' creativity.
The entire project closely follows the theme of colours, making vivid blue and pure white the key elements of the new Art High School's visual identity. The School's functional spaces are diversified and flexible and a series of large, fluid spaces become an extension of the classrooms, once again to give maximum freedom to the students' creativity. The internal structures are finished in blue, while the brownish-red stairs clearly highlight the vertical traffic.
The architects from the Various Associates studio have created a visually striking intervention, without losing sight of beauty and functionality, two fundamental aspects of a school. What’s more, reclaiming a former industrial site to invest in the future of young people renders the gesture even more poetic. 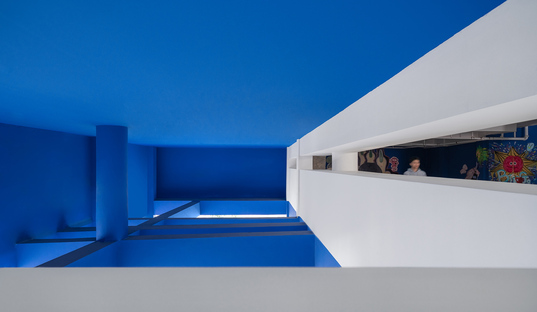 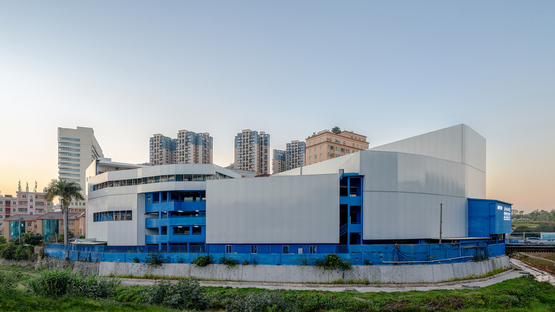 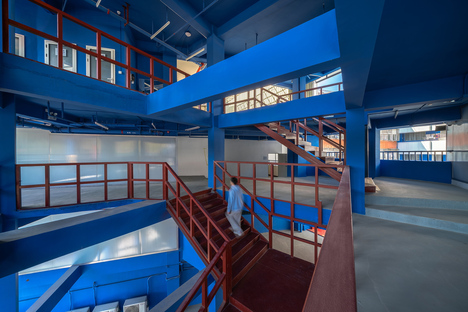 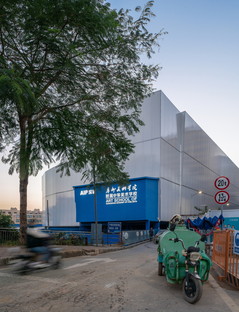 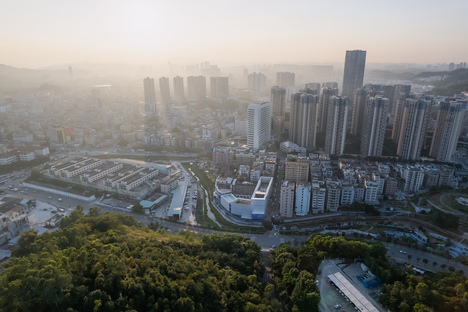 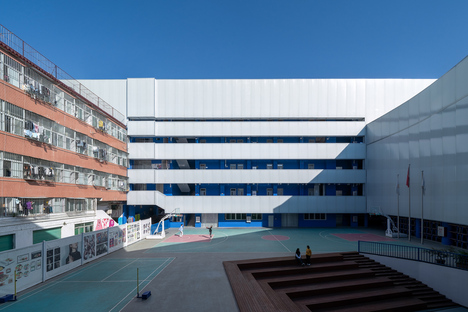 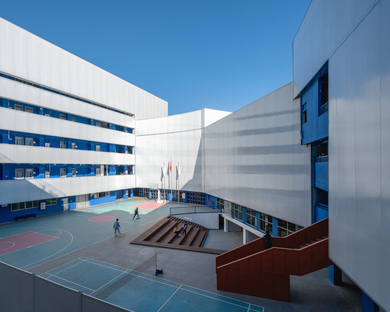 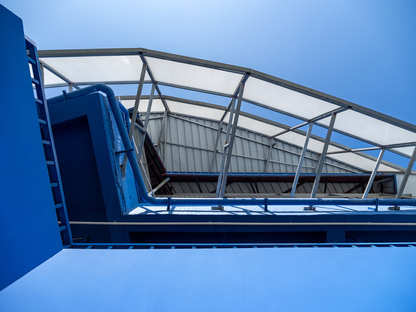 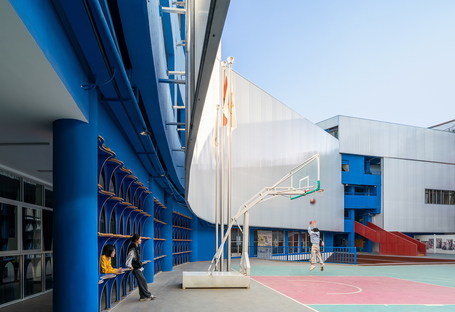 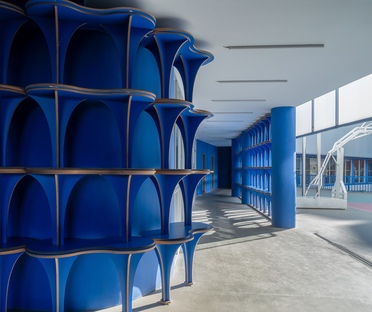 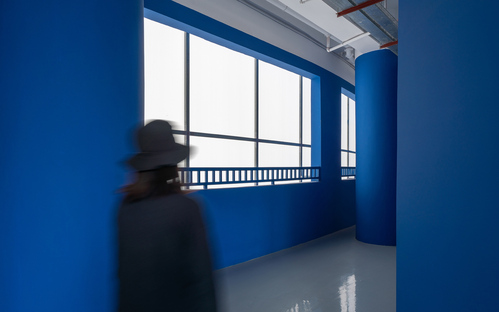 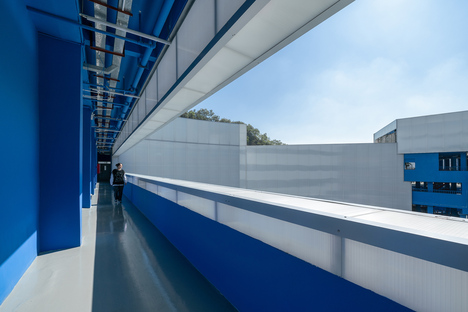 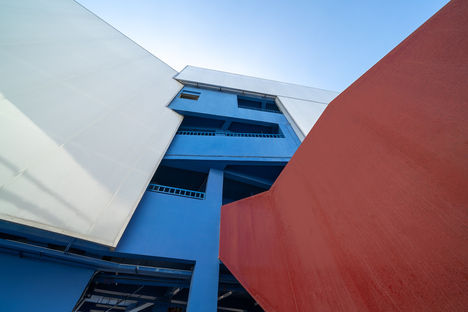 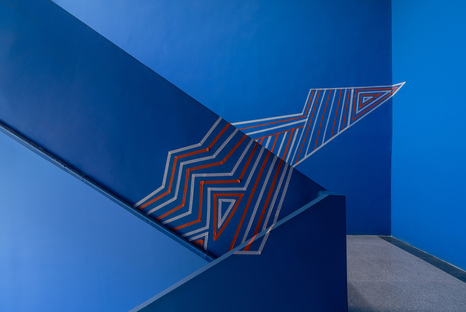 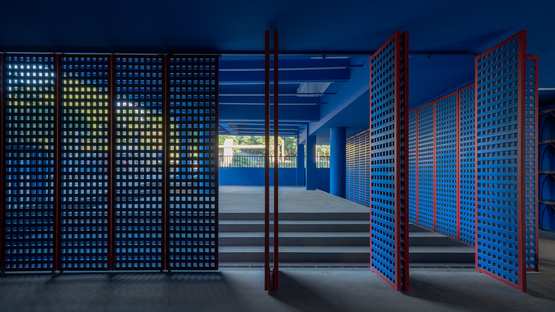 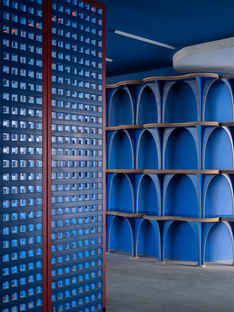