Solar Egg, the micro-architecture crafted by the artists Mats Bigert and Lars Bergström for the property developer Riksbyggen is a small, portable sauna that has travelled the world for the last few years. 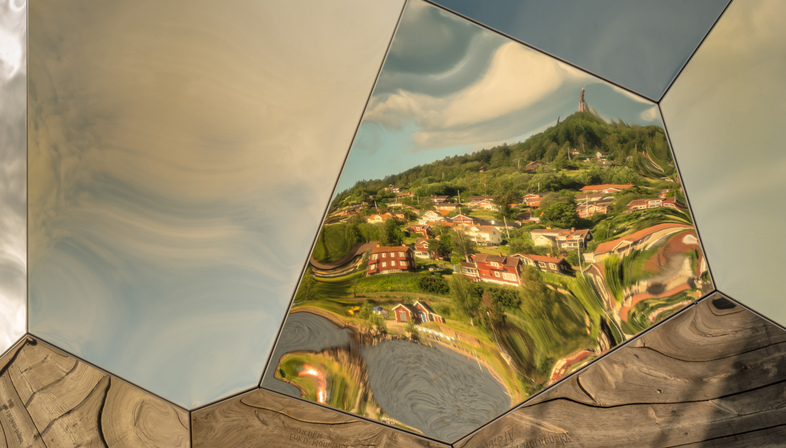 Solar Egg, the micro-architecture crafted by the artists Mats Bigert and Lars Bergström for the property developer Riksbyggen is a small, portable sauna that has travelled the world for the last few years. It’s now back in Sweden, adorning the jetty of the township of Rättvik on Lake Siljan.


Solar Egg by Bigert & Bergström was commissioned by the property developer Riksbyggen. From 12 June until the end of summer it will be acting as a landmark for the township of Rättvik in the historical Dalarna County in central Sweden that is bordered with Norway in the west.
The installation by the Swedish pair of artists is, of course, an ovoid-shaped structure made up of 69 separate pieces, making it easy to assemble; it is 5 metres high and 4 metres wide and is clad in reflective stainless steel panels that reflect the landscape. The interior is all timber and is heated by a heart-shaped wood-fired stove. It was initially designed as a landmark for Kiruna, the northernmost town in Sweden, which was forced to completely relocate. Originally founded as a mining town to serve the largest iron ore mine in Europe and it will have to move quite a distance to the east to escape subsidence from the iron-ore mine. Solar Egg was set on a hilltop to hold its silent watch over Kiruna as it embarks on its epic move.
Solar Egg has the same function in Rättvik, underscoring the importance of the so-called Guggenheim effect that we have often discussed here. In other words, the fact that eye-catching art and architecture can change our perception of a certain place and make it more appealing. This is what the initiators are hoping for in Rättvik.
The town’s 628-metre long jetty, Långbryggan, was originally built as an arrival point for the steamer “S/S Rättvik”. Now Solar Egg, with its golden, reflective skin stands proudly at the end of the jetty, so visitors from all over the world can first enter the warmth of the sauna for relaxed contemplation and debate, then jump into the lake to cool off afterwards.
Since April 2017, Solar Egg has hosted sauna-seeking visitors in numerous stunning locations all over the world:  Björkliden, Paris, Stockholm, Copenhagen, Gällivare and Minnesota (USA).  In November 2018, Time Out released its bucket-list of “The very best things to do, all over the world”, and Solar Egg was the third item on the list of 50.
Its resounding success with the general public has been confirmed also in Rättvik. “Visitors can book their own sauna experience inside the Solar Egg and the response from the public has been overwhelming,”, say the organisers. “All slots have been fully booked, but we are releasing additional ones on the 15th of July.”
If you’re not planning to visit the Dalarna this summer to enjoy this experience of Swedish tradition, architecture and landscape, you can comfort yourself with “Bigert & Bergström: Solar Egg”, a lavishly illustrated book that chronicles the making of the artwork, from rough sketches and blueprints, via studio visits to the tour of the final piece.  It includes texts by Sinziana Ravini, Michael Thouber, and Göran Cars, as well as an interview with the artists and with Mathias Sandberg, sales and marketing manager at Riksbyggen. 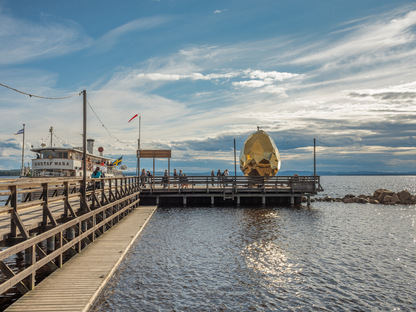 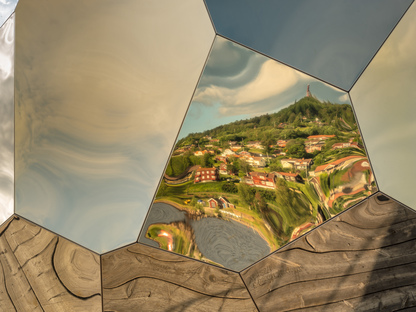 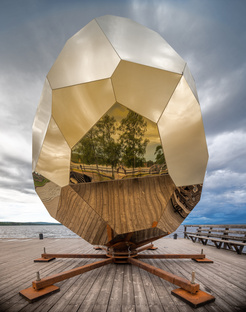 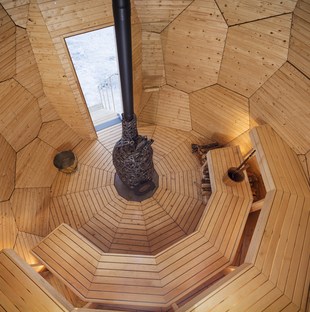 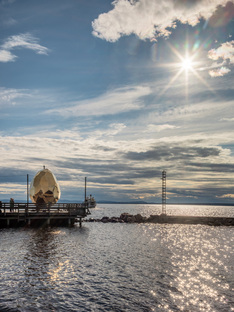 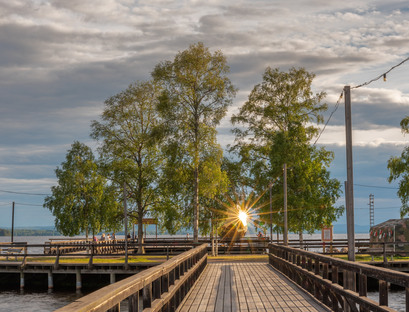 Solar Egg, a sauna for the urban transformation of Kiruna, Sweden