The Boa Mistura group of Madrid implemented a project of great social value in the Brasilândia favelas of São Paulo, getting the inhabitants involved in the transformation of their neighbourhood and establishing a new empathy among them and with the environment they live in. The basic considerations underlying the project were: a slum is a spontaneous construction of low quality housing in a fragile environment; it has no urban infrastructures; the houses are built on the basis of a grid topography. The lanes winding up the hill are divided into “becos”, vehicle lanes, and “vielas”, narrow pedestrian pathways with steps which are the true centre of community life.

In this setting, the artists of Boa Mistura implemented their “Participative Urban Art” project using art as a tool for change and inspiration. The community’s participation in the preparations was an essential part of the work, and it was this idea that gave rise to the project’s keywords (“BELEZA”, “FIRMEZA”, “AMOR”, “DOÇURA” and “ORGULHO”).This is not just a decorative project, like applying make-up to the “vielas”, for it goes beyond mere visual impact, which is only noticeable from certain angles, as in a snapshot.

By getting the inhabitants themselves involved in making their neighbourhood into something else, a Visual Marketing operation applied to visual design of urban development, the local people were able to play an active role in aesthetic and social improvement of public spaces, creating a new empathy between private and public spaces, a more intense link, benefitting quality of life in the neighbourhood in general with only a few inexpensive, sustainable tools: paint, brushes and lots of inspiration, bringing light into the laneways of Brasilândia, São Paolo.


The result of the project will be presented at “Virada Sustentável” (sustainable change) in São Paolo on June 4 and 5, 2012. 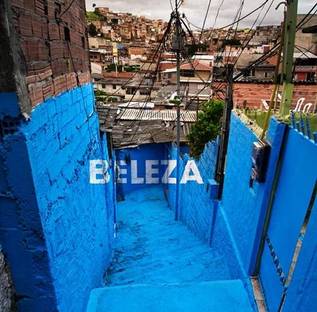