Spanish Basurama collective have created two facilities for the city of Taipei during World Design Capital Taipei 2016 as part of the development of public spaces of the city. The intervention was split into two parts, the Kids Watertank Ambition Park and the Civic Swing Space. The first is a park near a kindergarten dedicated to children, the other is still a playground but intended as a new public space for the city. The solutions are built using urban waste. 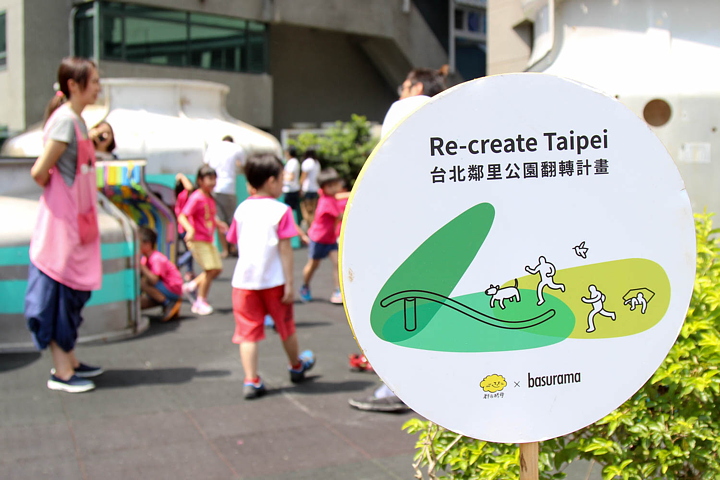 You proposed two different interventions. Was this due to your studies of the context or was this the brief from the beginning?
It was, certainly, due to the context. Together with City Yeast we have been getting in touch with neighbors, associations, and citizens to get to know which were their main concerns about public space, parks and playgrounds in Taipei. In both cases we tried to make an intervention associated to the target group identified for those spaces. The Kids Ambition park is more devoted to kids, as it is adjacent to a kindergarten; but it could also be visited and used by other people. The Civic Space was designed to be a space for a wider audience, and you could see kids when they are out of the school, youngsters at night, and workers having a nap just after lunch. 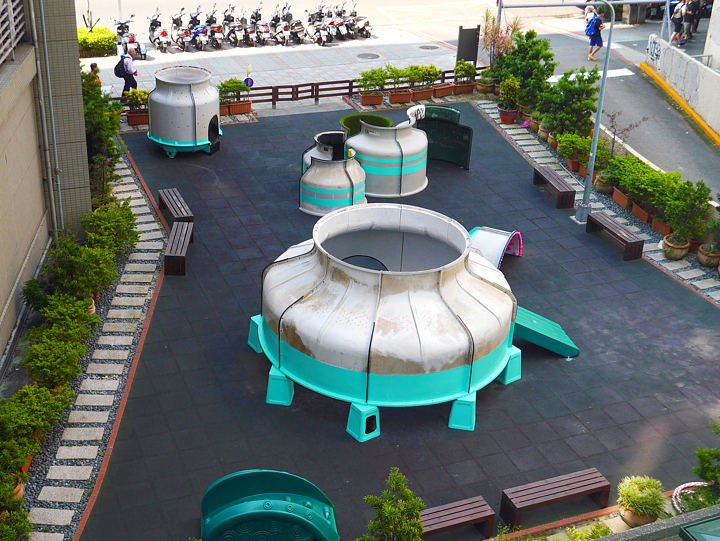 From the beginning we were looking for different materials for each park as we wanted to make a point about the versatility and potentiality of those materials, and make people reflect on the possibilities. Both parks are prototypes; the idea is to develop long-term parks in future. If we made these parks in 10 days, imagine what we could do with more time and resources. As the name says, the The Kids Watertank Ambition Park consists of a giant tank of water from an industrial refrigeration system and 5 tanks of different sizes from air conditioning systems. These may be unusual elements for creating playgrounds but it’s important to show active recycling. For The Civic Swing Space we used lampposts from the municipality wasteland and some wood from the park department wasteland. 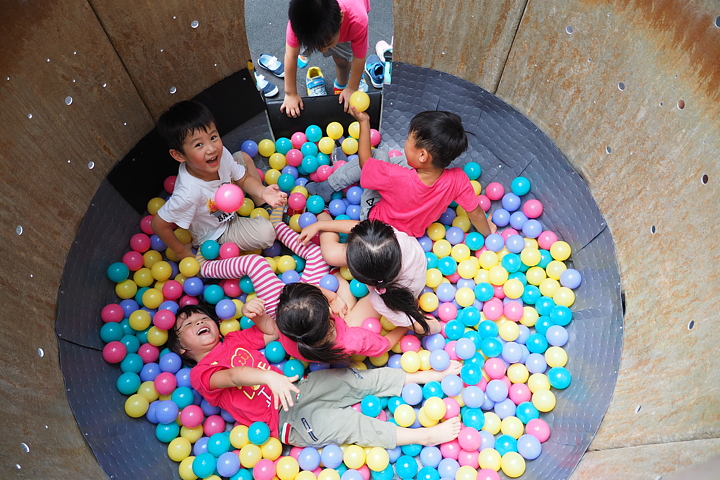 How important is the real understanding of the local dynamics to create something meaningful for the community?
Communities are the ones that will be using the spaces, so it seems logical to take them into account in the urban planning. Not every community is the same, so why should the spaces be the same all over the city? We also believe that is not only positive to involve them but good for the city and the country. Involving the communities in this process makes better citizens, who are concerned about their city, the public spaces and citizens that would take care of them and of each other. 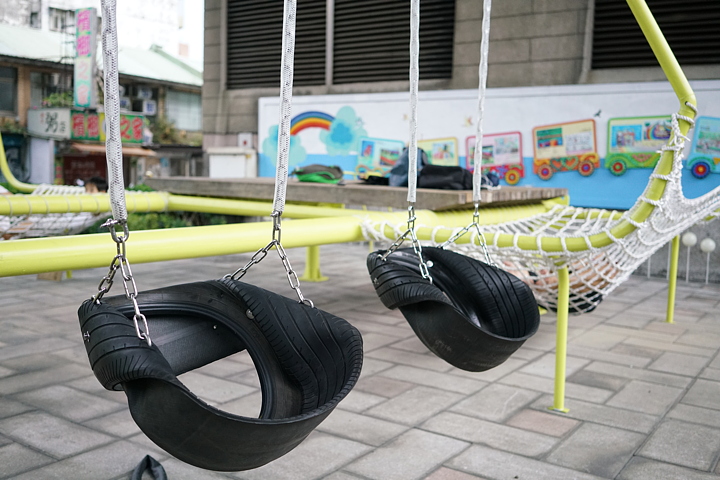 What was the reaction of the citizens regarding the use of recycled elements?
We always work by reusing (not recycling) materials, because we believe that trash does not exist, and that every material has a lot to give if we look at them with no prejudices and apply creativity and design to them. Water tanks are built of pieces (units) that could be assembled in different ways, allowing multiple possibilities and uses. They are really easy to work with and to connect, and easy to replicate, which is one of our main ideas....once we go, people have to be able to take care of the space, fix it if is needed and so on. 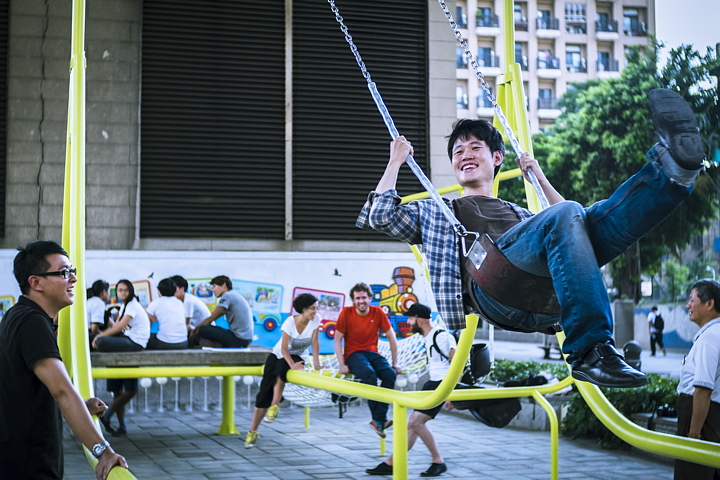 Taiwan has one of the best waste management systems in the world so people are used to reusing and recycling. At first everybody is a bit skeptical whenever you tell them that we are going to use trash materials but we do take care of hygiene and security, and I think they also understand that is an added value to the project, working with up-cycling materials and towards a circular economy. 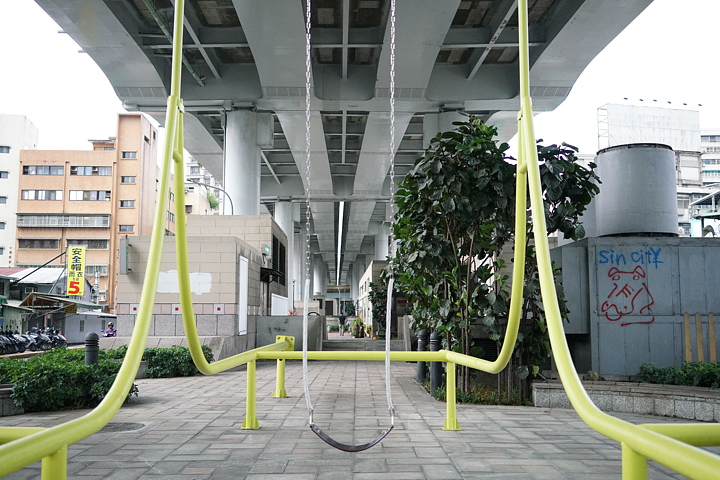 How do you evaluate the importance of these urban interventions? Can they have a pilot function and “shake” people?
Our main objective with this project is to open up the debate about the use of public space in Taiwan, of the uniformity of the playgrounds, and the hyper-regulation and excessive signage of what to do and how to do things. I believe we have moved things forward a little, now the discussion is open, the parent association for different kind of parks in Taiwan (no plastic and all same color parks) is getting more attention (...) 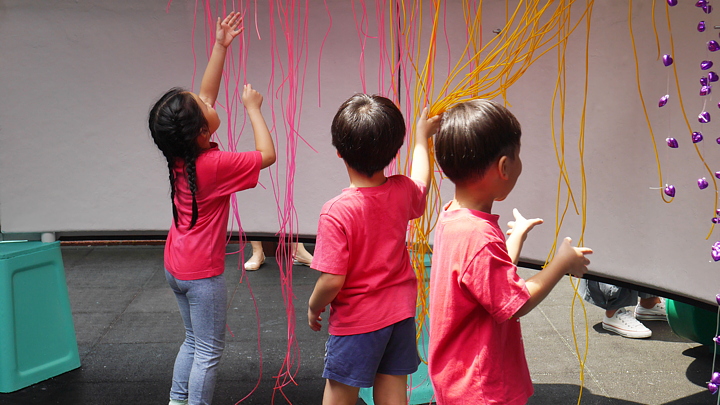 I believe in art as a way to communicate, and of course as a way to make visible environmental and social problems, but also as a way to face them, as a way for social transformation and engagement. And I do think that politicians could also see the potential, now we have to work to settle a procurement and find a way to make them real and possible according to the legislation.