The Norwegian studio RRA, Reiulf Ramstad Arkitekter, has completed a residential project in Ski, a small town south of Oslo. The Ski Tower, in its ten storeys contains 38 dwellings, while its iconic skin makes it stand out as a landmark in the Magasinparken district. 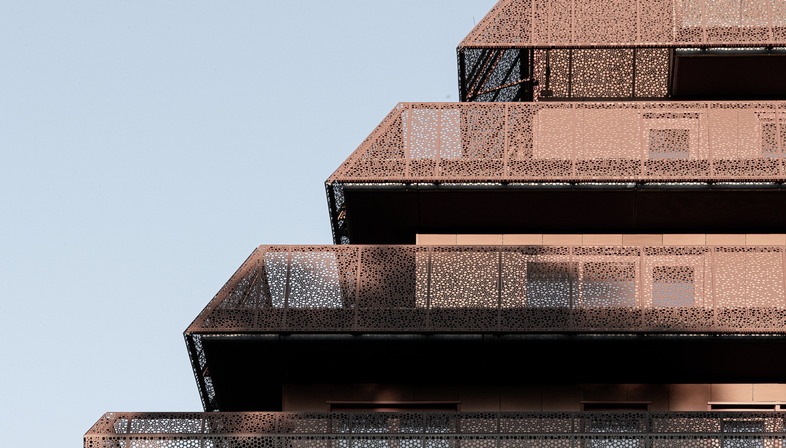 The small town of Ski, whose name has nothing to do with the famous winter sport, derives from the Norwegian word 'skeid', meaning race, and is easily accessible by train or car from the centre of Oslo, from which it is not even 30 km away. Its strategic location has meant that over the past 30 years, the number of people living in Ski and commuting to Oslo for work has increased rapidly, numbering more than 30 thousand inhabitants. This trend is set to continue as immigration and birth rates in the Oslo/Akershus region are growing, and housing availability in the city of Oslo is limited.
Such a demographic situation in Ski has given rise to several projects for the construction of new neighbourhoods to cope with the high demand for quality housing. These include the Magasinparken area in the verdant district of Ski Vest, not far from the city centre and well connected to the station, consequently convenient for people working in Oslo. The development of this area, a former military camp rehabilitated for residential use, is being overseen by developer Solon Eiendom ASA to create 500 flats in buildings with unique architecture and made of durable materials. Based on Solon Eiendom's input and in collaboration with some of Norway's leading architects, various housing ideas were developed. Among these are five tower buildings proposed by four distinguished architects, including one designed by the RRA studio.
The Ski Tårn, or Ski Tower, the name of the project by Reiulf Ramstad Arkitekter, started from the desire to create an insertion in harmony with the adjacent historical landscape, characterised by buildings dating back to 1890. For this reason, an architecture was proposed which, while having a strong visual impact, is light, despite its ten storeys with a total of 38 dwellings.
The result is the merit of several clever design schemes. First, the geometry of the volume, which tapers as it rises, and the fact that each floor has large terraces, thus mediating between the built volume and the surrounding nature. Next, of course, is the material choice made for the cladding, namely copper. A metal whose colour changes over the years without losing any of its qualities and its peculiarity helps the integration of the building into the Magasinparken residential complex. So the architects achieve an optical effect reinforced by the perforated motif of the terrace railings, as it helps blur the tower's contours and embellish the inhabitants' experience. So, they are protected without losing the visual dialogue with the outside dwellings.
As a whole, the Ski Tower flats have different layouts, incorporate the latest energy-saving technologies, including underfloor heating, and enjoy, in addition to the aforementioned terraces, a walkable roof for use by the dwellers and shared green spaces. All to foster social interaction among the neighbourhood's residents.
Work on Magasinparken is still in progress, and when the district is finished, in 2023, Ski will have a residential complex built by Norway's leading architects, Reiulf Ramstad Arkitekter, but also Code, A-Lab and R21. Each building will have its own identity, and they will all be united by a focus on context. 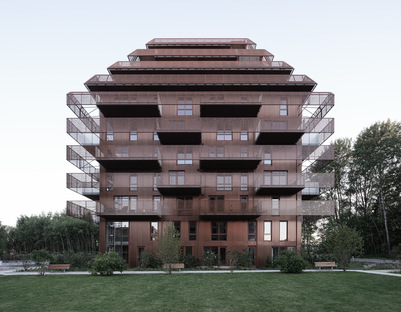 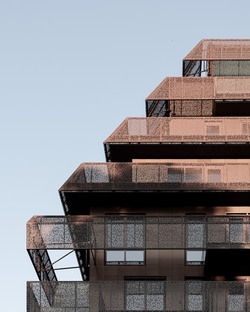 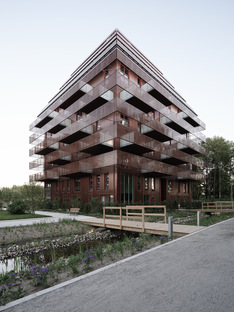 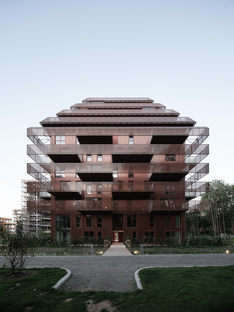 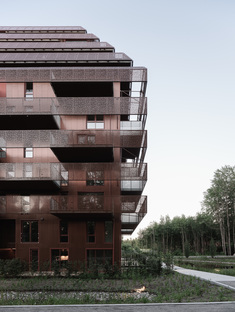 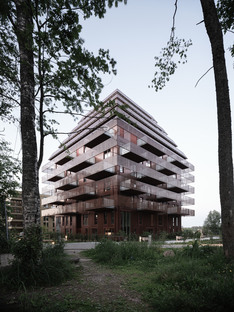 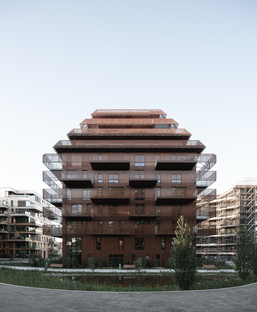 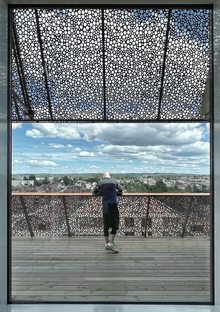