A historic 19th-century building near Amsterdam Central Station, the Droogbak, has been transformed into a contemporary office space. Commissioned by Allianz Real Estate, the KCAP architectural firm, together with the ABT consulting engineers, carried out the spatial transformation of the listed building. The interior design of the structure that houses the Clifford Chance law firm was completed by Fokkema & Partners. 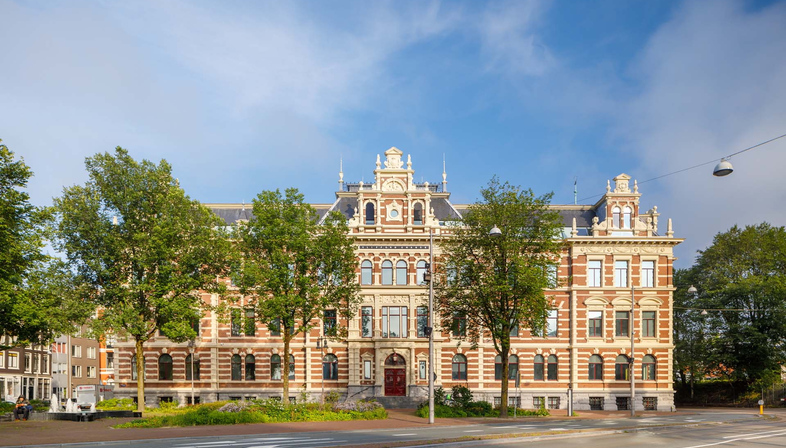 A work that involved a diverse team, which lasted over 5 years, to revive the Droogbak, a Neo-Renaissance building in the centre of Amsterdam. Designed in 1884 as the headquarters of the Hollandse IJzeren Spoorweg Maatschappij (Dutch Iron Railway Company), the building has had several users and already underwent an extensive restoration twenty years ago.
As the working group explains in their joint press note, the intervention aims to "respectfully adapt the building to meet the needs of the contemporary work environment; not only through physical interventions, for example by modernising the internal climate and acoustics, but above all by enabling a new way of working, in which informal encounters and social interaction take centre stage."
Since the central courtyard of the Droogbak had been covered and converted into a library during the previous restoration, architects from the KCAP studio decided to reactivated this space. The bright, glass covered atrium was therefore conceived as a crucial node in the building's new routing, as a dynamic and animated place for meeting, interaction and exchange. The addition of new staircases that provide access to the upper floors and to the restaurant in the basement play an important role in this sense. The building's bay windows and balconies, which face inwards, reinforce the visual relationships between floors and with the atrium. "The atrium is the heart of Droogbak and serves as the "starting point" of the transformation concept, both literally and figuratively. It offers a new dynamic and a new way of working, with respect for the historical architecture", explains Irma van Oort, partner at KCAP. "A perfect fusion of past and present".
In this sense, the creation of a sculptural spiral staircase in anodised aluminium serves as a point of visual interest inside the atrium, a built addition that promotes social interaction between the users of this iconic building housing the offices of the Clifford Chance law firm. This staircase, which leads to the second floor, was in fact conceived as an ideal place for informal encounters, while at the same time connecting a series of mini-hubs located on the building's interior façade. These mini hubs are basically small extensions of the rooms with glass sky boxes that overlook the atrium. An architectural and structural gesture which, on the one hand, preserves the values of the historic and protected monument, while on the other transforms the existing building into a contemporary office, in line with the needs of users: more light, more interaction.
In this sense, Fokkema & Partners' interior design offers a playful interpretation of the building's historical features, creating a sense of spaciousness, openness and intimacy. In addition, visual references to the Neo-Renaissance period, in combination with a pronounced colour palette, help transform the period rooms, with their original details, into a modern office environment. The top floor, with its original wooden rafters, is a true gem, having been kept free of partitions and organised into different “home zones”. The opening of this space further reveals the quality of the monument, creating a panoramic view of the city. "Droogbak's new interior offers a strikingly contemporary user experience; an experience that finds its origins in the stately architecture, but also offers new perspectives. Maximum effect has been achieved with minimal impact on the monumental interior,", explains Laura Atsma, partner of Fokkema & Partners. 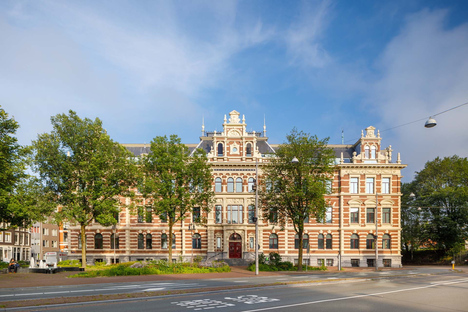 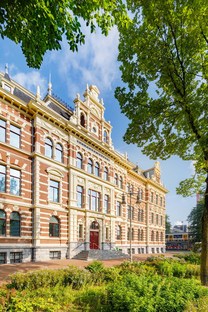 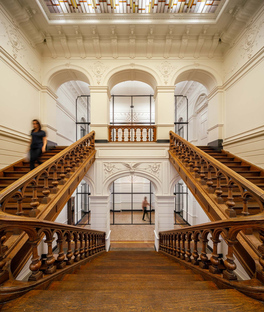 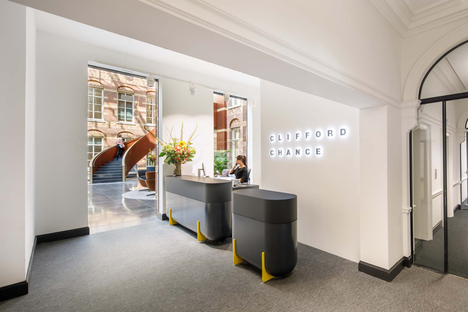 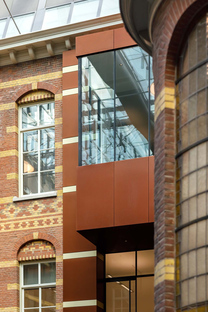 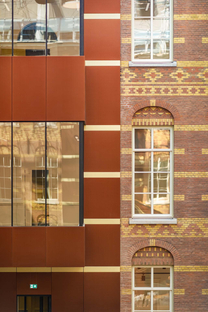 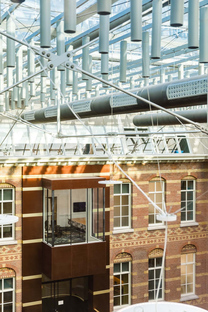 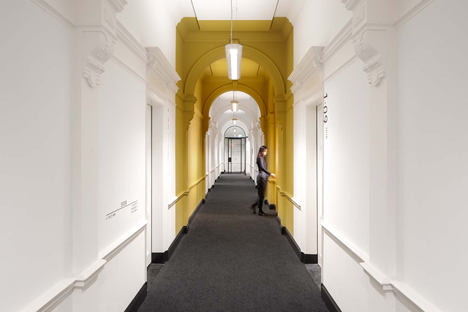 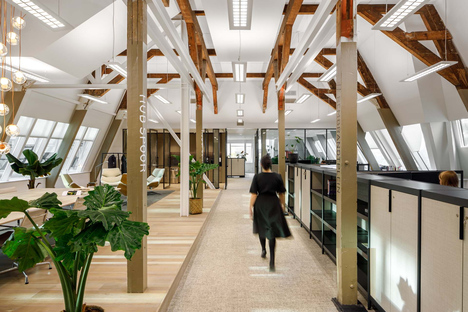 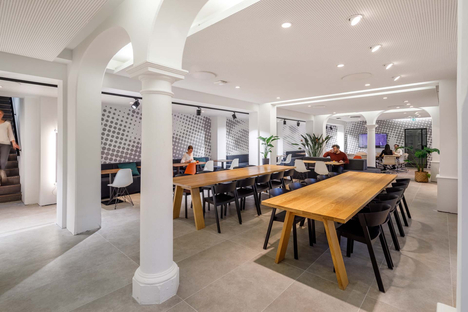 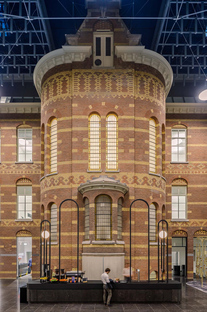 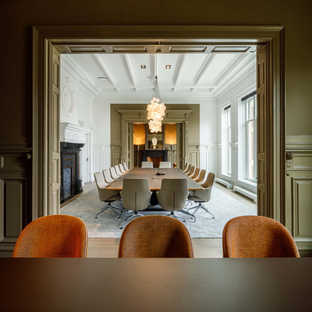 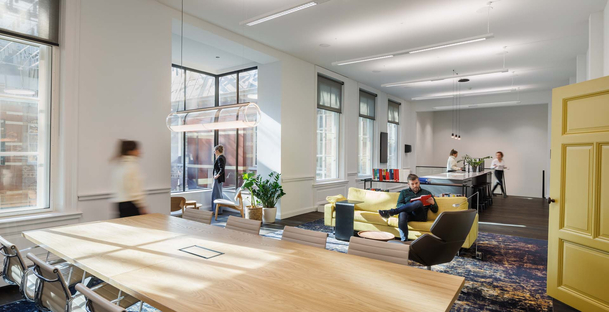 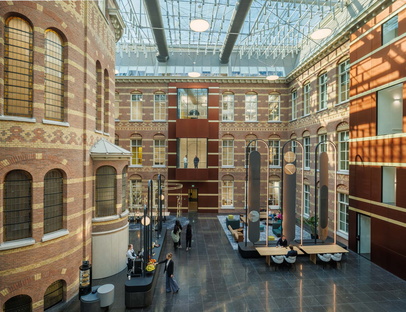 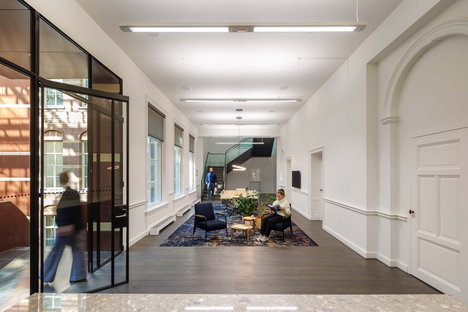 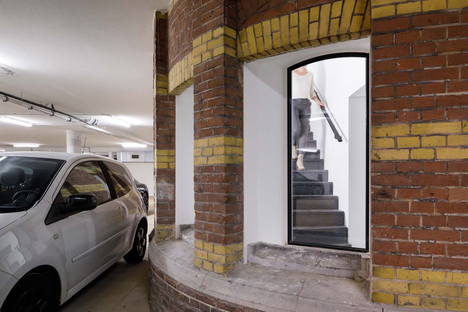 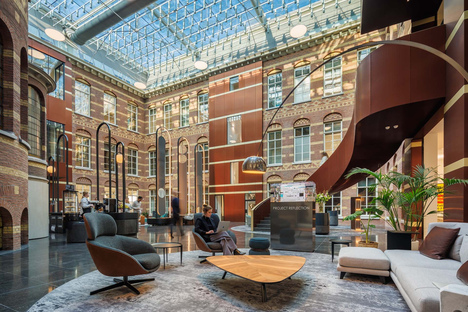