The designers from the Architectural Design and Research Institute of Zhejiang University (UAD) are behind the headquarters of the Cyrus Tang Foundation (CTF) in the natural setting of the East Tai Lake Ecological Park in Wujiang district, Suzhou. The sustainable architecture aims at optimising functions and blending into the backdrop. 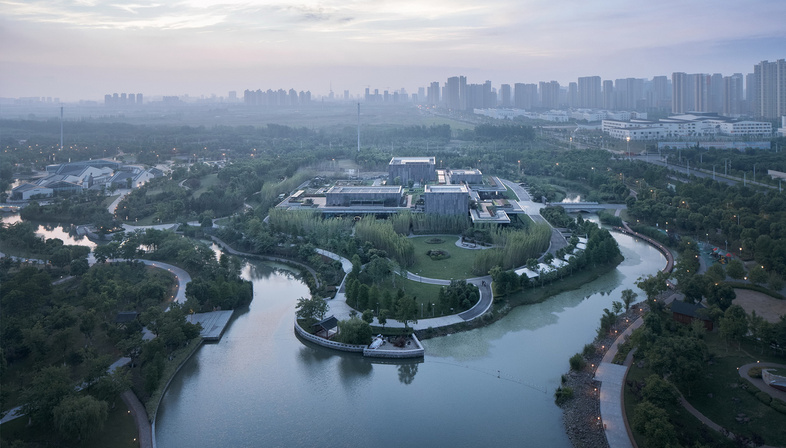 The Tang Foundation was founded by Cyrus Tang, a highly successful Chinese- American businessman who was born in China and emigrated to the United States in 1950. When he returned to China in the 1980s, he set up the Chinese branch of his organisation, which focuses on supporting disadvantaged communities. This constantly growing foundation needed a place to accommodate offices, a museum for its art collection, events spaces for members’ meetings, exhibitions, conferences and training. It also needed headquarters that could adapt to meet future needs. So, the team from the Architectural Design and Research Institute of Zhejiang University (UAD) was called in to create the new complex located in the East Tai Lake Ecological Park, Wujiang District, Suzhou, China.
The Cyrus Tang Foundation Center is a sprawling complex covering 15,000 square metres in this natural landscape. The idea was to gently merge the architecture into the environment, a green building that just “dissolves” into its backdrop. These two aspects - blending into the beautiful environmental context and adopting sustainable architectural solutions - dominated the whole project.
Knowing already from the brief that the foundation’s need for functional spaces would continue to grow, the architects took into consideration the necessity to leave freedom for its future development and proposed a design that would allow for flexible expansion and adaptation of the building’s footprint. Any future extensions can be built naturally alongside the existing construction without impacting on its overall harmony.
Only the office areas of the Cyrus Tang Foundation Center are used continuously, whereas the exhibition area and the multipurpose conference room are only used occasionally. With this in mind, the team proposed a project with a centralised layout, where the office area, exhibition zone, multipurpose room and museum are all incorporated under a single roof. Each functional space can be used independently but at the same time, they can also be used together. When used independently, each area is fitted out with its own entrance and exit.
The Cyrus Tang Foundation Center by UAD was awarded the Chinese Certificate of Green Building Design Label (Two Star) in 2014, for its application of many green technologies, fully developed in China. So geothermal heat pumps, building-integrated photovoltaics, tubular daylight devices, green roofs, automated shading systems, green lighting and intelligence operation management are all part of the design and make it possible to save land, energy, water and building materials. The team worked with simulation software during the initial design process to optimise their analysis of the building’s natural ventilation and lighting. This also helped them decide on the building’s actual orientation.
Because the Cyrus Tang Foundation Center is much more than streamlined, eco-friendly architecture, it’s also an inspiring platform for displaying and sharing green technologies, which brings together high-tech resources, the fruits of research from the universities the foundation works with and supports. 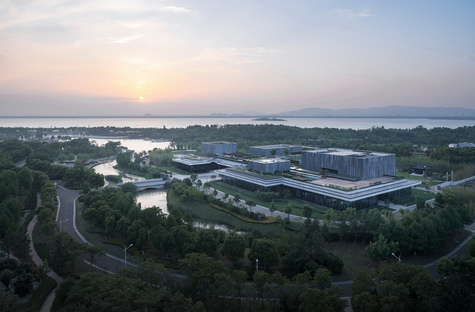 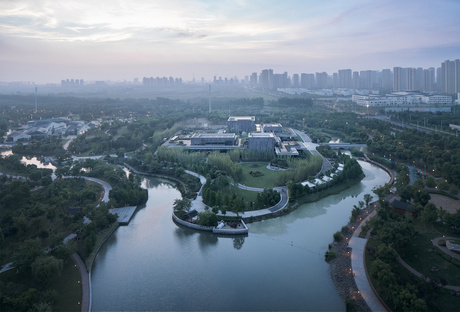 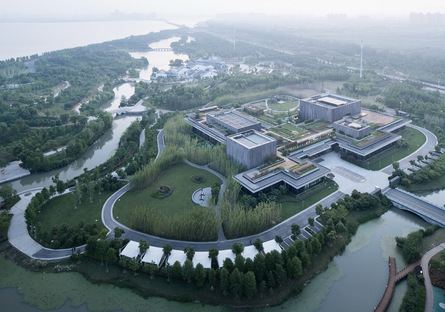 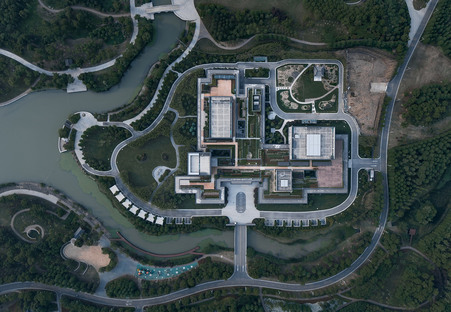 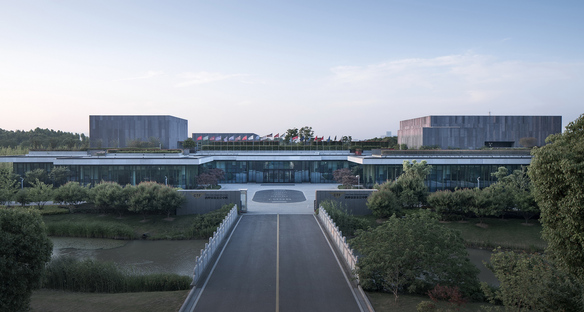 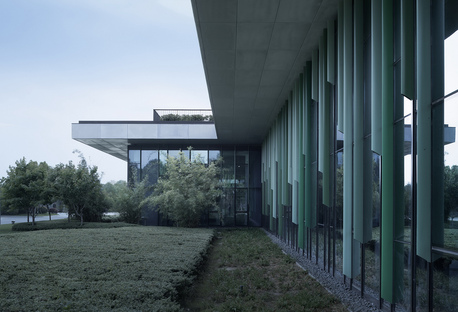 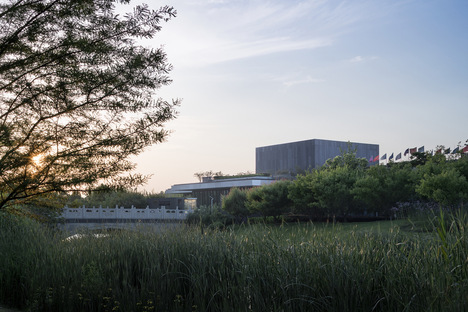 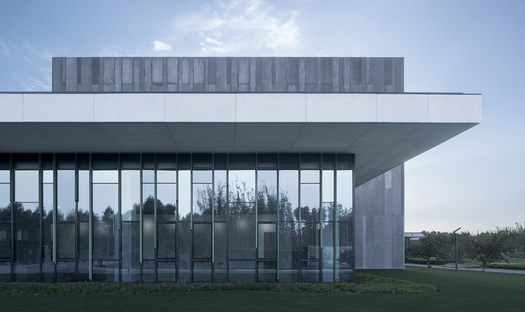 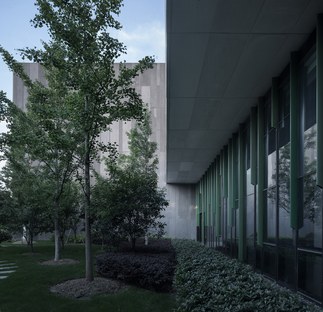 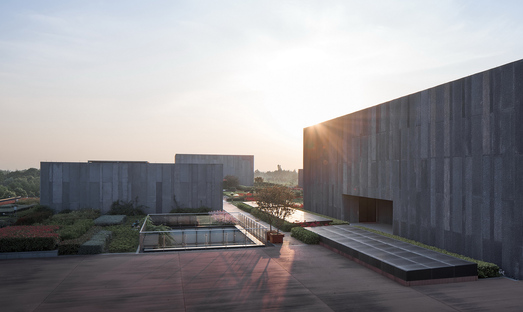 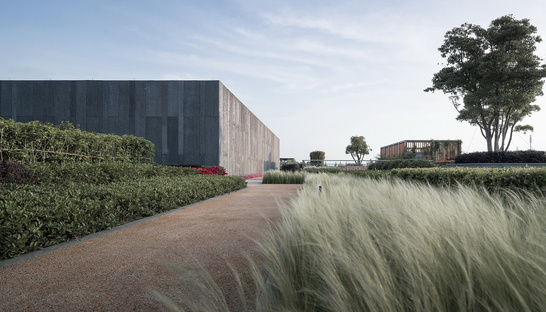 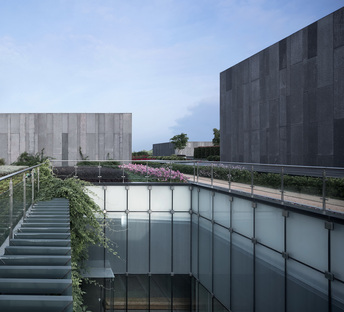 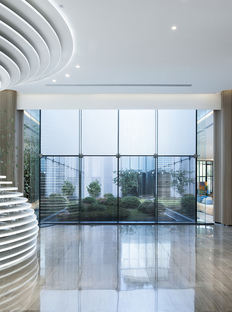