Colormaster F, an installation by Manuel Franke in the Städel Garten Frankfurt 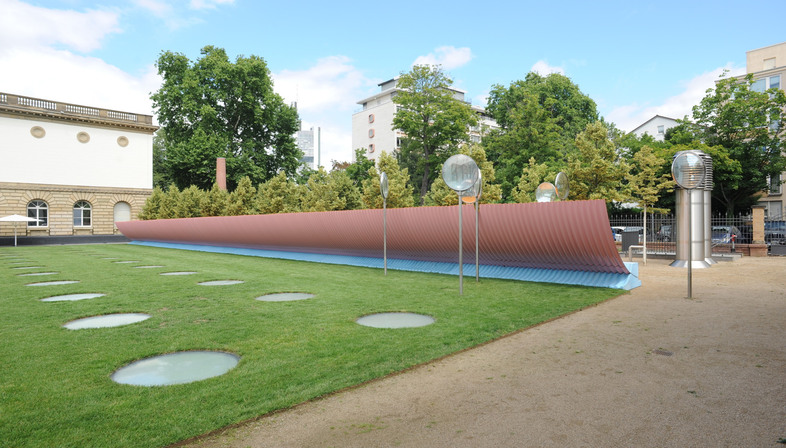 As part of the “Im Städel Garten” series, German artist Manuel Frank developed an artwork of monumental dimensions - 50 metres long and 2.5 metres high - for the garden of the Städel Museum. The colourful installation will mark a new and distinctive boundary between the museum and the Städelschule.


Remember the extension of the Städel Museum in Frankfurt, Germania, Germany, by Schneider+Schumann Planungsgesellschaft mbH, a project that won an invitation-only competition in 2007 and was described by the jury as “a brilliant jewel during the day, a luminous carpet at night” (link)?
The extension was opened to the public in 2012, but the garden between the museum and the famous Städelschule is still accessible. Its undulating aesthetic with the portholes of the underlying room was the perfect design to act as a landmark for the museum and it becomes a major challenge for the artists who are invited to create temporary and site-specific projects for the summer.
Martin Engler, head of the Städel contemporary art collection, explains why Manuel Frank was chosen as the ideal artist to temporarily improve the garden with a cross-media work of art.
The work by Franke, called Colormaster F is an installation that rests on a massive blue concrete base and looks like a cross between an industrial and museum facade, painting and sculpture, halfpipe and bench. It responds to the lawn - a green space bordered by buildings on three sides - with a curved membrane in vivid, monochrome colours.
An insurmountable obstacle, Franke's object, on the one hand, blocks your view and on the other gives visitors the opportunity for a brand new experience of the hill in the middle of the garden. Colormaster F not only transforms the garden in terms of spatial perception, it also creates an additional space, both open and closed, in its interior. Manuel Franke's Colormaster F also encourages you to play, explore and relax, offering a completely new and interactive experience of the famous Städel Garten.
The artist studied at the Kunstakademie in Düsseldorf and explains that the word Colormaster comes from the name of a colour temperature gauge of the kind used in professional, pre-digital photography technology. A name Franke has used on other occasions, here adding an F that stands for the city of Frankfurt. With this title, the artist hints at the particular significance of colour in his work: "With colour, an object changes its identity".
Colormaster F doesn't force a certain point of view on its visitors but rather invites them to interact and explore other perspectives. Colormaster F can never be seen as a whole because of its size, but it always delivers two irreconcilable visual experiences, depending on whether you are on the hill above the Garden Halls or approaching the museum and works of art from the Dürerstrasse/city. Colormaster F makes the architecture of the Garden and the Städel Museum an integral component, which is also satisfying in itself and in any case offers visitors new visual and spatial challenges. Another must-visit destination when you're in Frankfurt. 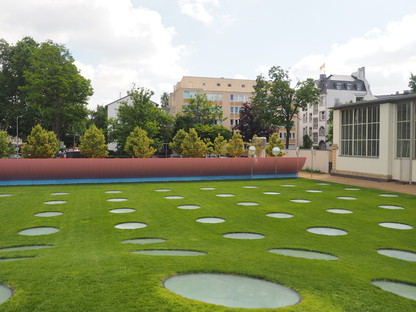 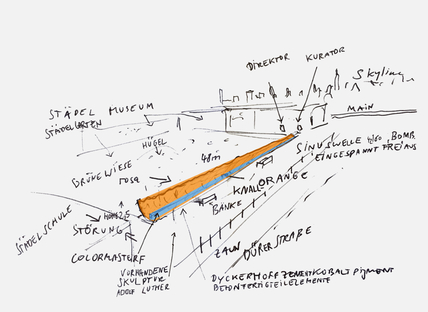 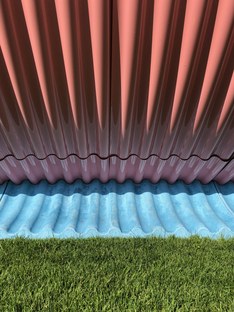 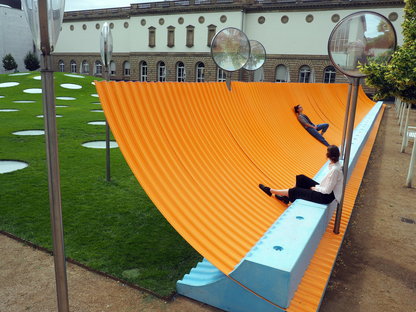 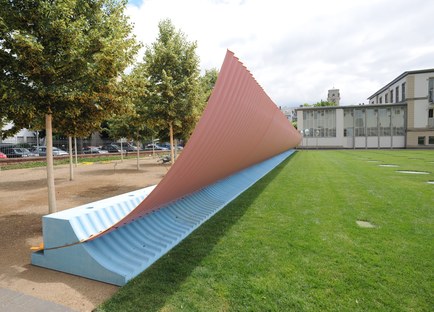