Charles Malis and the intelligent repurposing of an existing construction

The foresighted municipality of Molenbeek-Saint-Jean and the creativity of three architecture firms - LD2 architecture, Stéphanie Willocx Architecte and MAMOUT architectes - forged the virtuous refurbishment of an industrial site, to the benefit of the community. 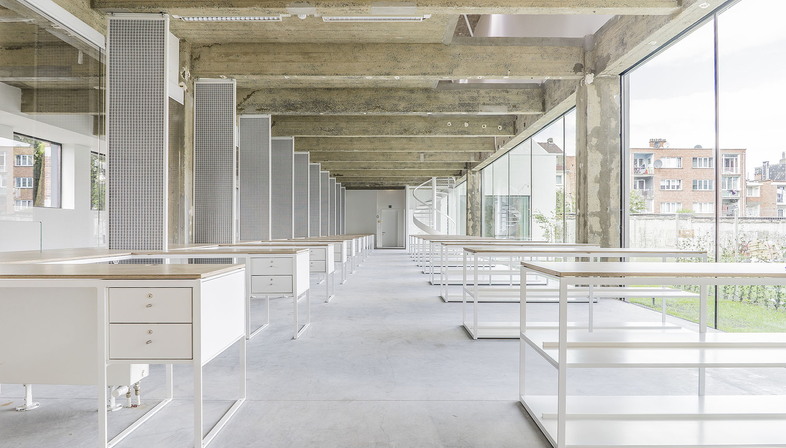 The foresighted municipality of Molenbeek-Saint-Jean and the creativity of three architecture firms - LD2 architecture, Stéphanie Willocx Architecte and MAMOUT architectes - forged the virtuous refurbishment of an industrial site, to the benefit of the community.


Unused industrial sites, often positioned strategically the urban fabric, are a constant in so many cities. This is also the case in Molenbeek-Saint-Jean, a densely populated, multicultural town north of Brussels, where a cigarette factory stood on rue Charles Malis. Only two buildings of the original complex remain, each with their own structure and spatial identity, but sharing the same decorative facade of bare bricks and bluestone.
The municipality launched a competition for the design of a city hall branch with 12 counters, administrative offices, and a waiting room, won by the team formed of LD2 architecture, Stéphanie Willocx Architecteand MAMOUT architectes. Their concept left the basic structure of the existing buildings untouched, simply improving the facades and achieving sustainability like energy performance and state-of-the-art systems automation.
The took the original floor plan of the buildings, which have now been repurposed, inserting their new plan with a flowing, logical layout. The shed volume has been turned into the new public entrance, on the highly recognisable facade side. The waiting room has been designed as a natural extension of the street, welcoming visitors in an in-between community space, drawing them into the horizontal building where the counters are located on the ground floor, lined up with the historical concrete columns, and the offices are on the first floor. An elegant white spiral staircase connects the two levels.
One thing that strikes you throughout the building - in the public areas as well as in the offices - is the amount of light: large windows opening to the outside bring in daylight, an effect that is underscored by the white furnishings and finishes, which contrast with the old concrete beams and columns and the paved floors.
With the municipal branch in rue Charles Malis, LD2 architecture, Stéphanie Willocx, and MAMOUT have come up with an excellent concept in a context with a high risk of deterioration, making the most of the old factory and thereby leaving other urban land free. This move by the town council has a strong symbolic meaning, because it shows respect for local history and also for the citizens, by offering them a pleasant backdrop for their dealings with the local authorities. 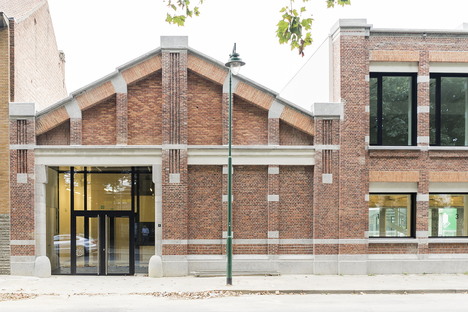 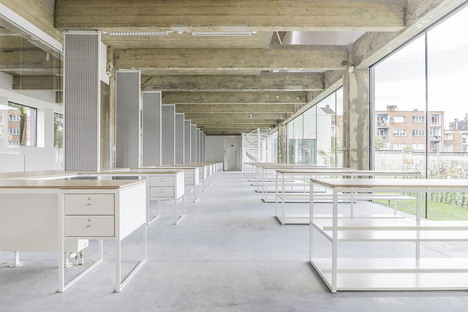 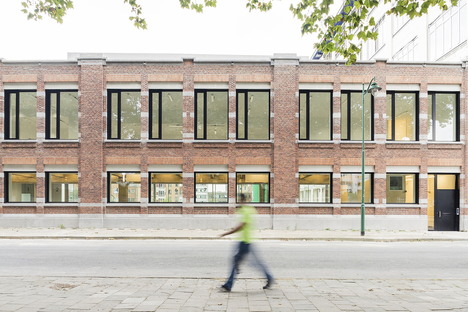 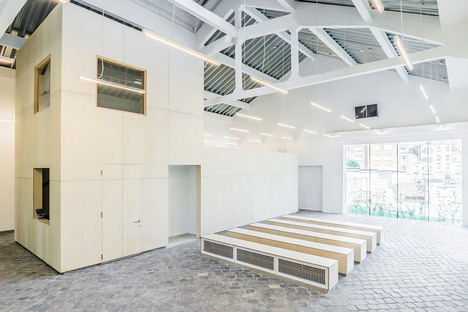 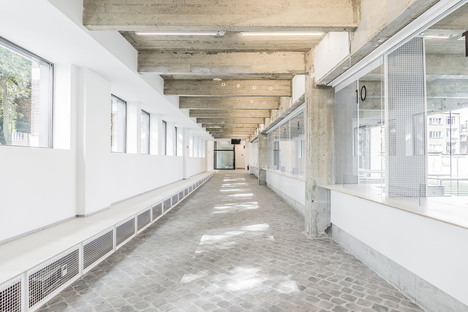 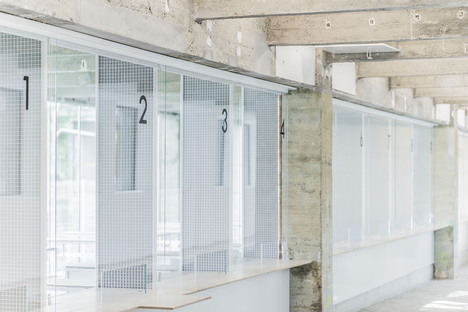 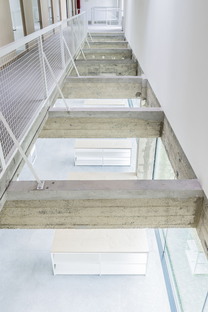 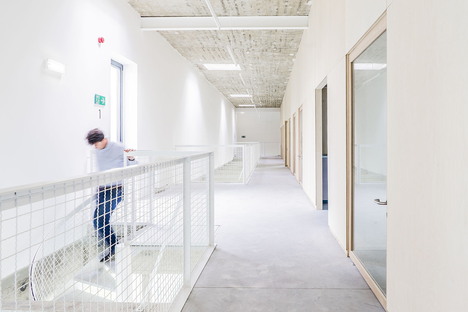 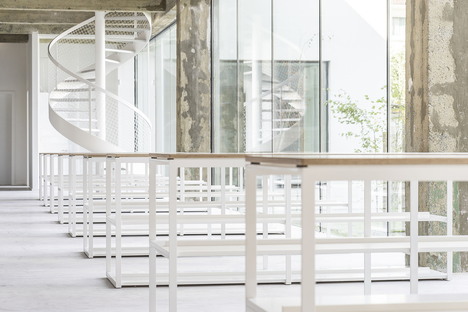 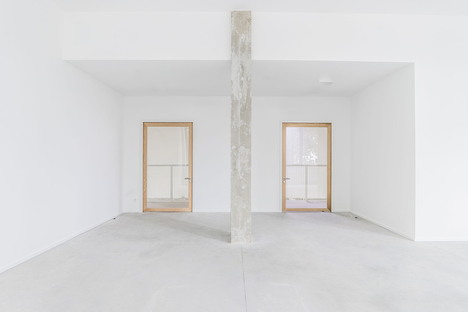 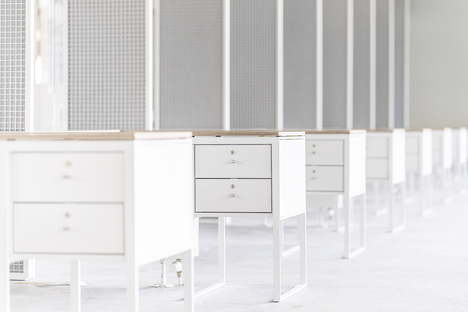 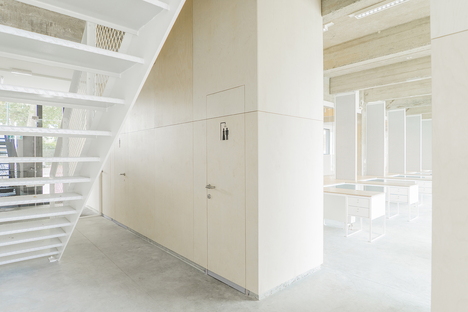 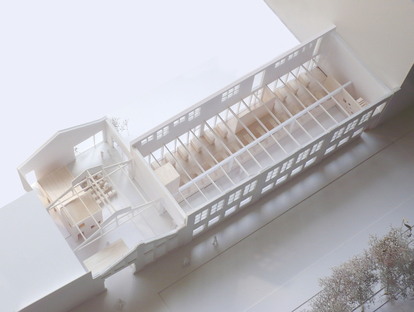 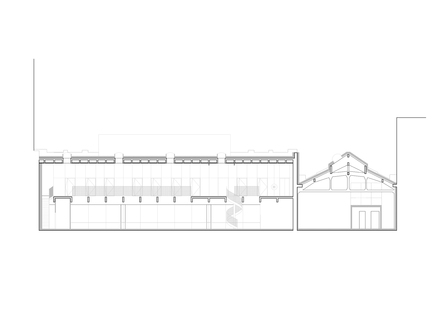