In Tilburg - like in the rest of the Netherlands - taking public transport is not just a sustainable action, it is also an enjoyable experience thanks to the attractive infrastructures. In Tilburg - like in the rest of the Netherlands - taking public transport is not just a sustainable action, it is also an enjoyable experience thanks to the attractive infrastructures. In the case of the bus station in Tilburg designed by cepezed, architecture with an integrated design that generates its own power.


The new bus station is part of the large-scale revitalization of the public transport hub in Tilburg, Holland. The architects from Dutch studio cepezed, who were already behind the revamp of the city’s railway station and new bicycle park have redesigned everything with a view to improving the comfort of travellers and making the flow of traffic clearer and more enjoyable.
The new facility is located on the west side of the railway station, occupying more or less the same place as the old bus station. But because the project also encompasses a former apartment building, the whole facility takes on a different dimension and is open to mixed use in the near future.
Architecturally speaking, the basic configuration consists of a series of very slim columns that hold up a curved PVC and EFTE awning to form a triangular circuit with a length of over 160 metres and an open space in the centre. This translucent awning has two overhanging offsets that widen the rooftop from 14 to 30 metres. These offsets align with the urban context and at the same time resonate with the monumental roof structure of the train station. The bus platforms are positioned around the outside - six for boarding and one for disembarking. At the wide end of the circuit, the new bus station incorporates a pavilion. This houses a canteen for bus drivers, a public transport service point and a commercial space bordering on a raised terrace.
The awning is the heart and soul of the station and covers the waiting zones as well as part of the roadside area. This means bus travellers can get on and off without getting wet, not an insignificant detail in rainy Holland. The structure is formed of a steel framework covered in ETFE sheeting, with a lighting system mounted on top. So the translucent material filters the sunlight, then in the evening, it turns into a large, spacious lighting element that makes travellers feel so much safer. 250 m2 of solar panels on top of this roof not only produce all the energy needed to power the bus station, including night lighting, digital signage, staff canteen and the public transport service point, they also become brise-soleil that project patterns of light and shade onto the ETFE to make travellers aware of their presence. The commercial space annexed to the station has its own energy system.
The architects from cepezed focused strongly on the theme of inclusion and on use of the station. The raised terrace is wheelchair-friendly, with a ramp leading upwards, and the handrail running between the terrace and platforms have braille signing. The ETFE foil of the awning is self-cleaning and is extremely low-maintenance. The awning is easily accessible via the pavilion and a walkable gutter for maintenance of the solar panels and electrical equipment. The overall design with basic lines and edges and corners kept to a minimum also reduces cleaning costs. For the future, the bus station already has provision for electricity equipment with a view to charging electric-powered buses.
Taking a bus in Tilburg has now become a really enjoyable and sustainable experience! 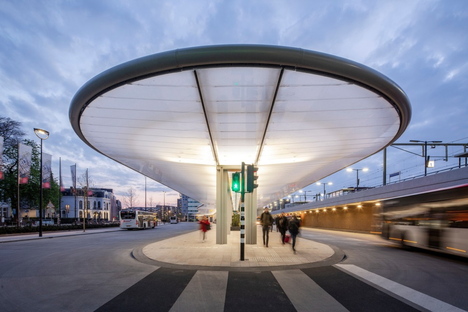 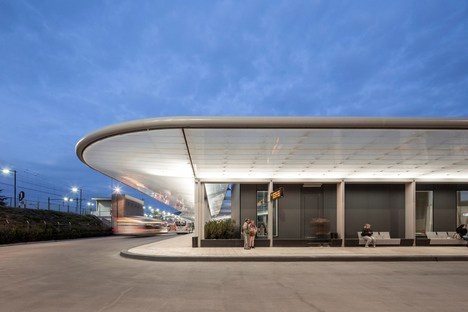 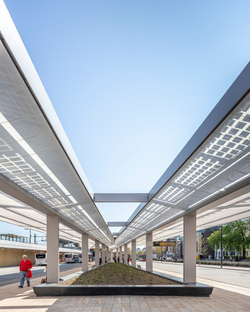