Canadian architect Brian MacKay-Lyons of MacKay-Lyons Sweetapple Architects Limited has been working since 1998 on what we could call a kind of architectural testing ground to explore ideas of form, materiality and building at Shobac farm in Nova Scotia, Canada.

Canadian architect Brian MacKay-Lyons of MacKay-Lyons Sweetapple Architects Limited has been working since 1998 on what we could call a kind of architectural testing ground to explore ideas of form, materiality and building at Shobac farm in Nova Scotia, Canada. 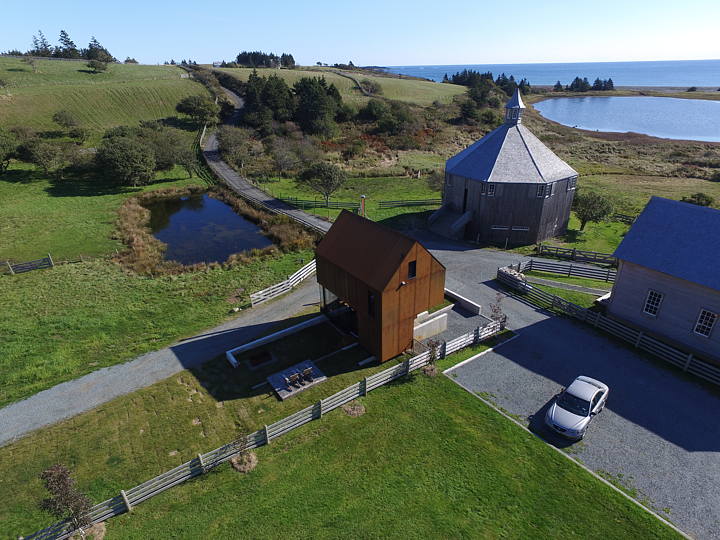 Shobac, located in Nova Scotia, part of Acadia - the Atlantic Canadian provinces - can trace its history back thousands of years, from the times of the Mi'kmaq Indians to the French colonists who founded the first farming and fishing village in 1604, to the German, Swiss and French Protestants who settled there in 1755. The community was abandoned in the mid-1900s, although it continued as a fishing port through to the 1970s, when the forests and trees began to reclaim the farmland.

As a former local, in 1988 Canadian architect Brian MacKay-Lyons from MacKay-Lyons Sweetapple Architects Limited decided to use Shobac as an architectural testing ground to embark on the rebuilding of Shobac. He is fully au fait with the natural beauty and the historical and architectural legacy of this place near the Gaff Point nature trust and the township of Lunenburg, which was the first German settlement in Canada and with the old, colourful timber houses in its historical centre, it was declared a UNESCO heritage-listed in 1995.

Brian MacKay-Lyons cleared the pastures and put in cattle and horses for livestock farming then over the years, he developed Shobac Campus where he continues to pursue his work in architectural research. This is a mix of old, renovated buildings, such as the Chebogue Schoolhouse from 1830, and modern constructions, including Enough House, already familiar to our readers; these buildings are all united by the range of materials used to construct them, local cedar wood first and foremost.

So, Shobac has become a model of sustainable recovery both in terms of architecture and landscape, since livestock farming helps to maintain the features of this idyllic location on the Atlantic coast, and if you want to, you can even spend your holidays here: some of the buildings are available for rent so you can take a break in this natural and architectural wonderland - what more could you ask for?