The latest addition to the Ruralation project from AZL Architects, which also includes the Librairie Avant-Garde bookstore, is the Daijiashan art hotel in Tonglu, eastern China. Home to the boutique hotel is a Shes Tsuchiya, a traditional Chinese dwelling built using rammed earth. 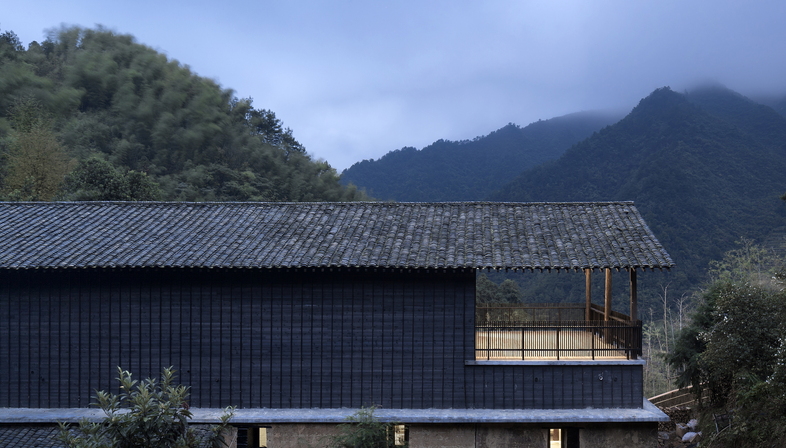 The Daijiashan art hotel is part of an architectural programme which Zhang Lei of AZL Architects calls Ruralation, inspired by the rhythms, methods and construction techniques used to build China’s traditional rural dwellings. The new boutique hotel is the second time the team of Chinese architects has restored prestigious rural buildings, repositories for traditional local construction methods which have sadly been neglected and abandoned. Floornature has already featured the eleventh branch of the well-known Chinese bookstore Librairie Avant-Garde, which is located in two refurbished adjacent buildings in the centre of Daijiashan.
The project for the new B&B involved restoring a traditional local rammed earth building or Shes Tsuchiya, which had an extensive gabled roof supported entirely by a wooden frame. Next to the main north unit was a smaller brick building with a flat roof, probably a storeroom. The external walls of both blocks were repaired and restored; while the floorplan of the main building was not changed, the south building was incorporated into a brick and glass structure with wooden window fixtures. Its original brickwork is still visible through the glass, while the walls of the new building have been painted white. AZL Architects also used this technique in the Librairie Avant-Garde project to highlight the walls added to the original structure. The south wing has more than doubled in size to host the restaurant, kitchens in the old building and an open-air bar on the roof.
The tiled roof of the old Shes Tsuchiya was raised a floor, while the original wooden supporting frame was restored and new brick walls were built beneath the masonry layer to create the reception areas.
The building’s original appearance, colours and some of its details have been kept: the rammed earth walls were stripped of their plaster coating and exposed; the firewood which was once piled around the small brickwork unit was used as a decorative feature for the walls of the new building, while it covers the whole of the roof; the dark wood used in the new windows and as a covering for the hotel’s new top floor contrasts with the pale-coloured bamboo which fences off small private courtyards. Finally, sheaves of straw were utilised as a parapet for the bar above the restaurant: this special type of straw is produced in the area and used to make brooms, so it is part of the local tradition.
Echoes of nature, of the earth and trees can be seen throughout the project. They are a source of inspiration for a type of architecture which is innovative yet rich in tradition, welcoming for tourists yet still part of the local fabric. 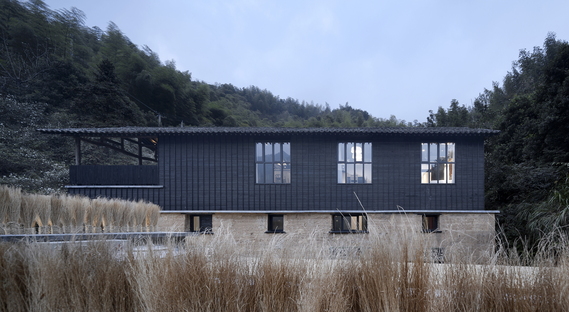 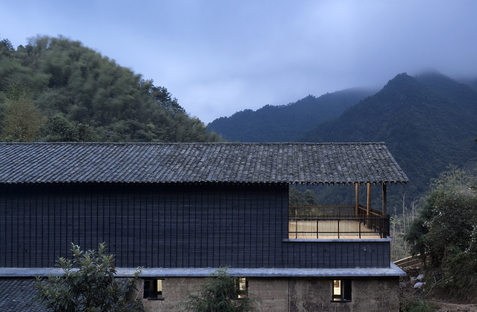 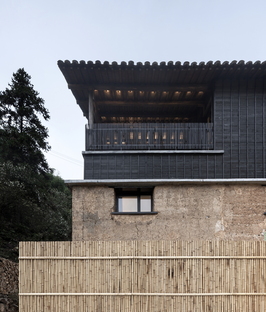 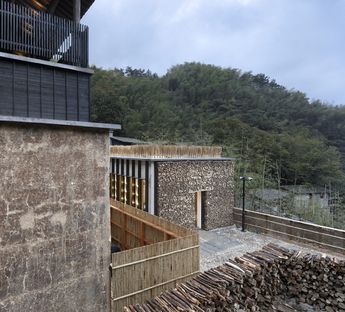 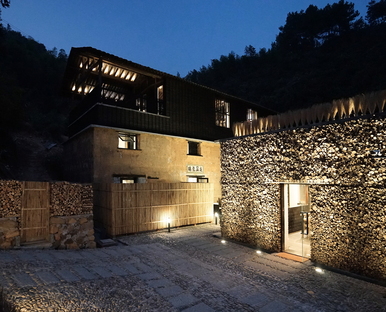 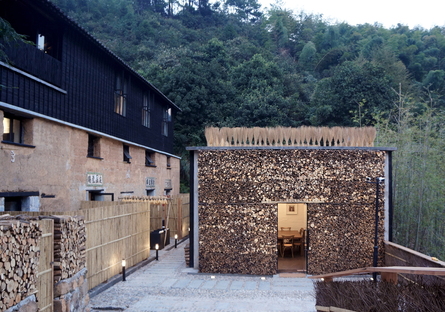 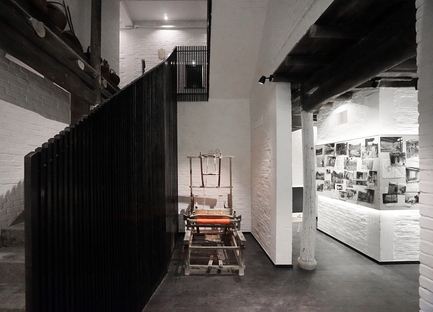 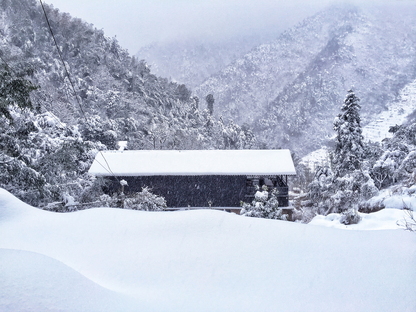 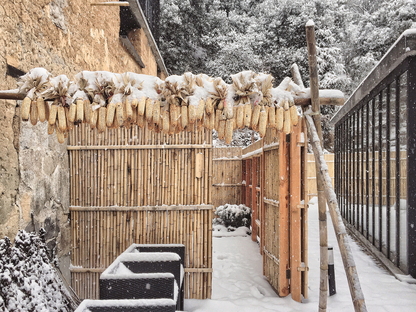 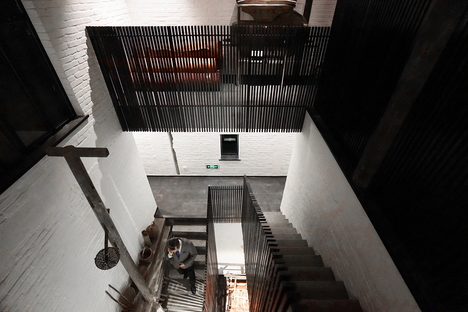 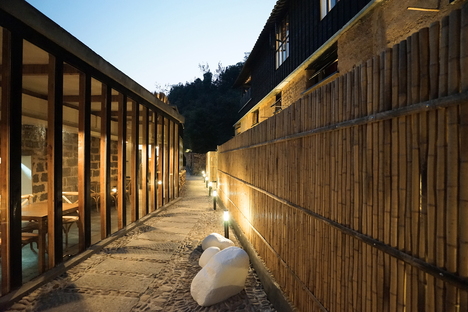 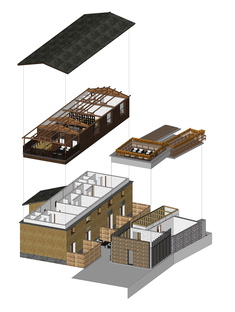 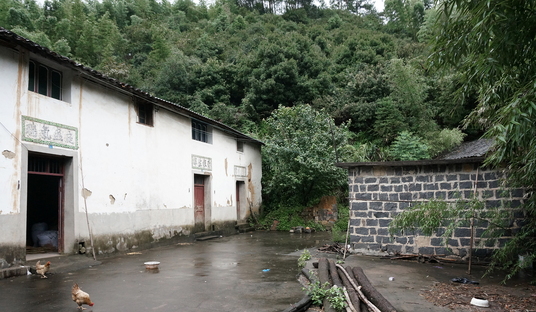 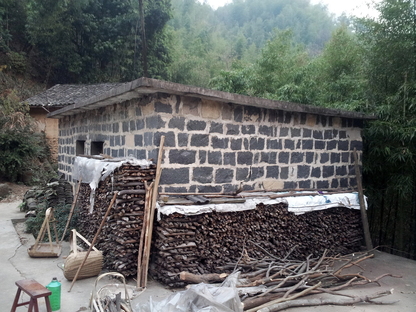 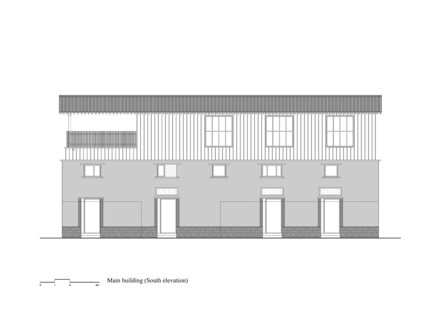 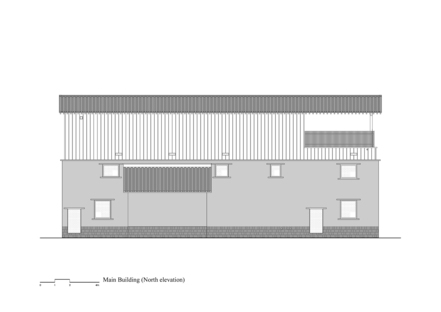 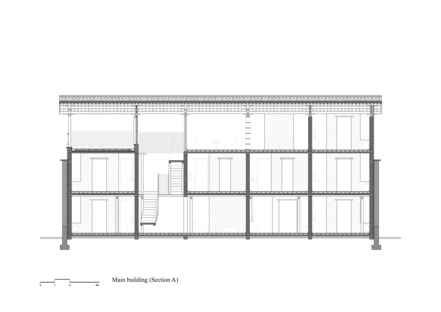 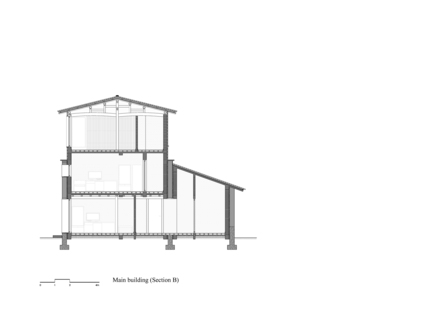 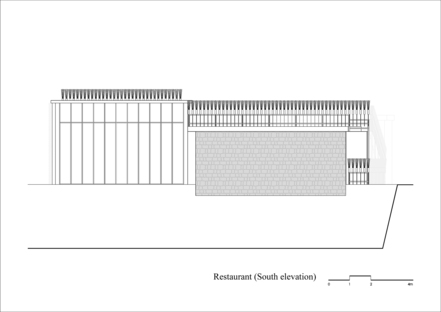 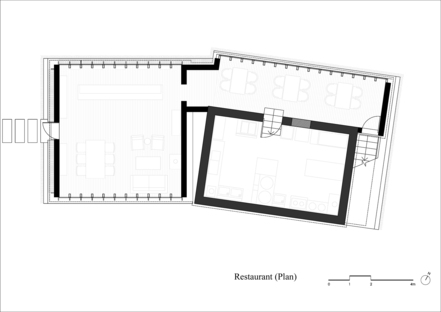