The Paris studio of architects Grégoire Zündel and Irina Cristea desined a Hotel d'entreprises, an incubator of resources for small to mid-sized enterprises which is part of an important urban renewal project in the 18th arrondissement, Porte de Montmartre. 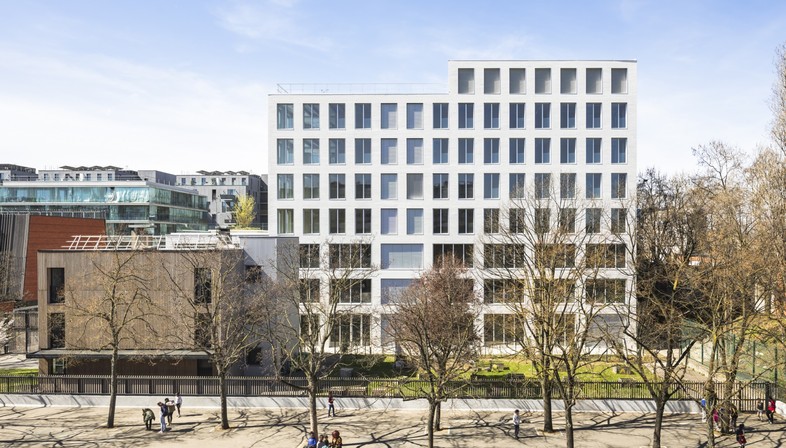 Atelier Zundel Cristea, the architectural studio founded by Grégoire Zündel and Irina Cristea, recently addressed a theme similar to the SALT project by MVRDV presented last week: creating an incubator or “hotel d'entreprises” for small to mid-sized enterprises. As in the case of SALT, Zundel Cristea’s project also works in a part of a city, in this case Paris, which is undergoing an important urban renewal project which is intended to become an economic and social renaissance. 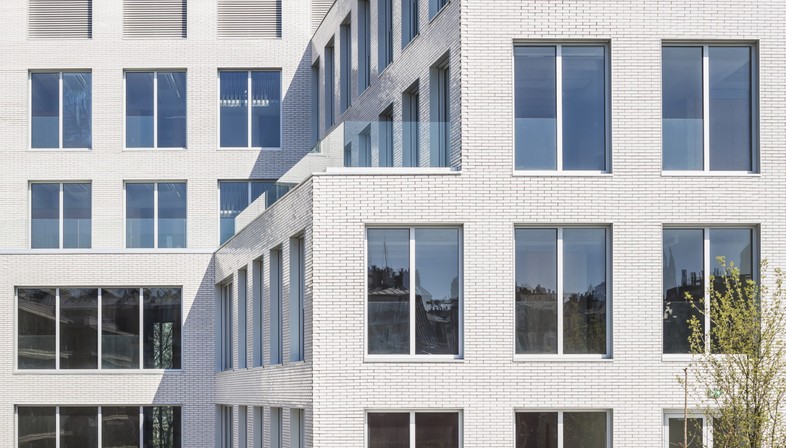 The GPRU (Grand Projet de Rénovation Urbaine) for the Porte de Montmartre neighbourhood in the 18th arrondissement of Paris is an ambitious urban development project involving remodelling of a number of traffic routes, reinforcement of urban continuity with the nearby municipality of Saint-Ouen, improvement of the use of public space and construction of new buildings. Various types of new constructions diversify the neighbourhood: from public services such as schools to homes, hotels and offices. This is the context of the project by Atelier Zundel Cristea: a building offering services for small to mid-sized enterprises. Not just small workspaces, measuring 50 to 150 m², the size most in demand among new companies emerging on the market, but also including common services such as conference halls and informal meeting spaces as well as consulting services.
Familiarity with the context, starting with the shape of the area and the texture of this part of the city, down to the physical and technical properties of the soil and the normative references, or study of the skyline o the volumes and their modelling into big terraced steps, are all elements the architects took into consideration in the study phase. The basic idea was to construct a building conveying an image of solidity and durability, connected with a specific identity the architects call architecture “made in Paris”. 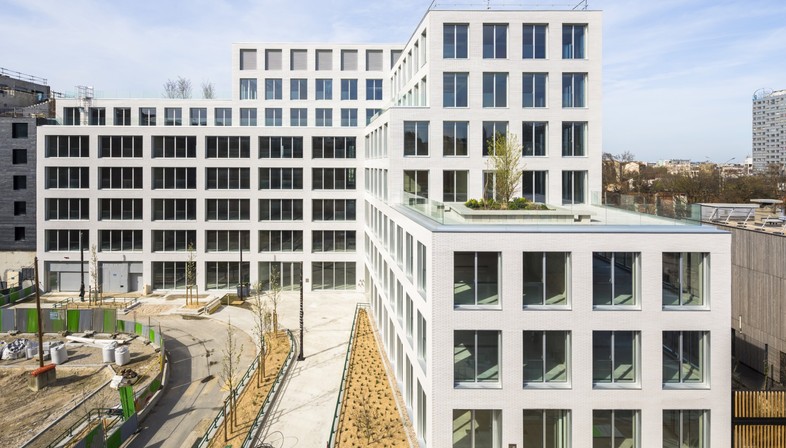 The seven-storey building, containing a total of 59 premises for businesses, has a weight-bearing frame of pillars and girders supporting concrete floor slabs, a form of construction that solves the need for a flexible floor plan that can easily be adapted to suit different requirements for spaces and installations, as well as future changes in its use. The vertical links and service areas such as the toilets are concentrated in vertical nuclei; the structure also determines the weave of the façade, becoming a frame for the big windows and adding rhythm to the walls.
The light metal window and the regularity of the facades with their big windows evoke the building’s industrial identity, while big garden terraces add a genteel touch. But it would be reductive to consider the presence of terraced open spaces with hanging gardens as a form of decoration for the walls and volumes, for in actual fact the architects designed the terraces to be true workspaces, or informal event venues at users’ disposal. 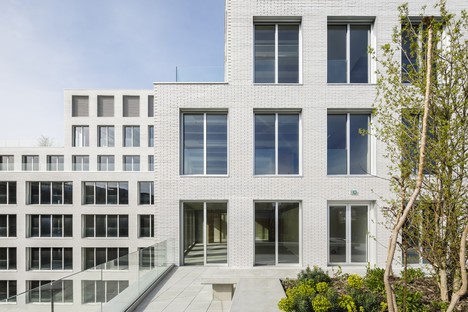 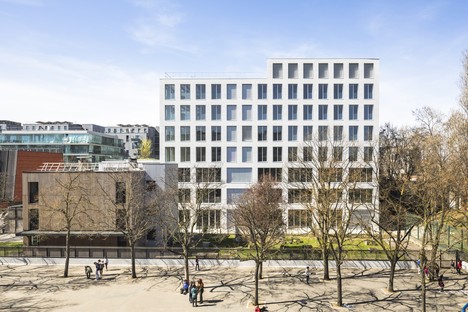 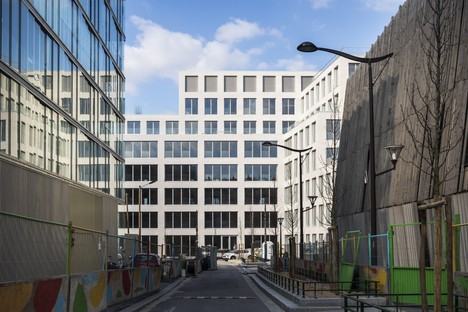 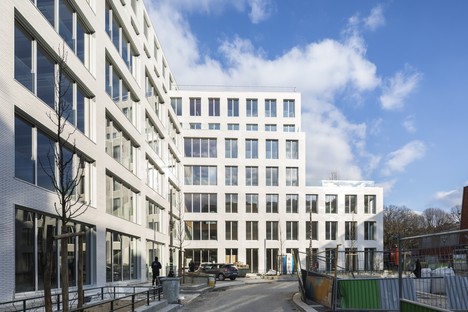 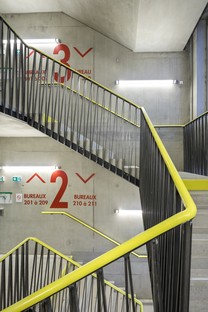 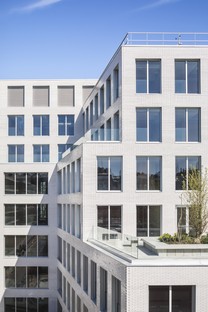 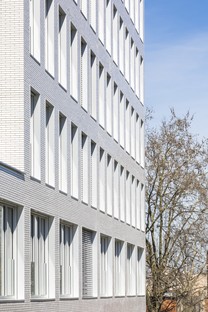 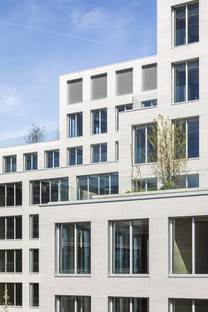 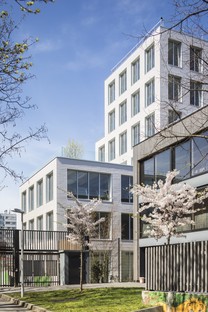 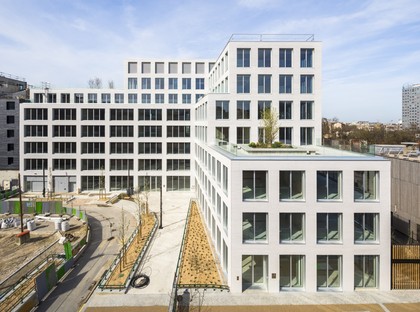 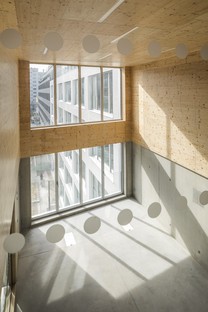 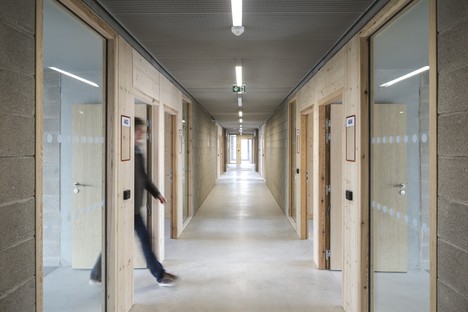 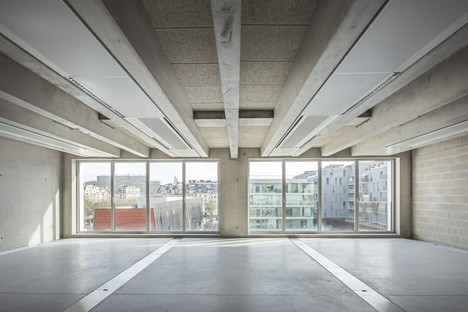 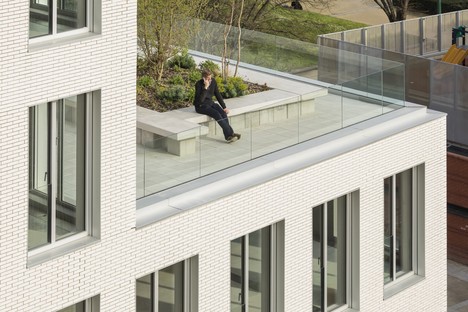 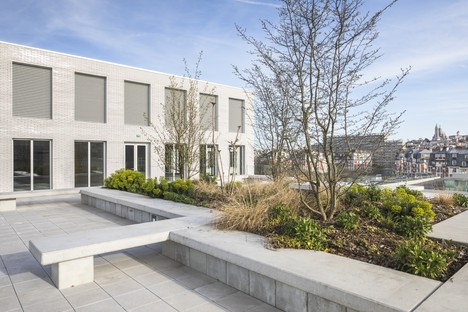