Atelier Stéphane Fernandez of Aix en Provence designed Sens, a student residence consisting of 84 units that becomes a new gateway between the historic city centre and the area involved in the Euroméditerranée public urban renewal project. The new building looks like a stone monolith, a simple, silent volume set in a very mixed, high-traffic urban area, destined to become an important link between the city and the landscape around it. 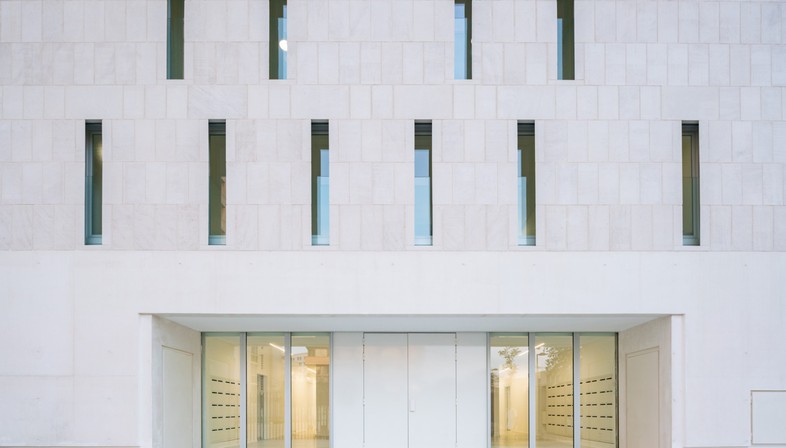 In Marseilles, the studio of architect Stéphane Fernandez designed Sens, a new student residence in a monolithic building that fits perfectly into its complex urban setting and provides an important link between the city and the landscape around it. The site selected for the new construction occupies a very important position in the fabric of the city.
The new complex is located in the centre of Marseilles, between the first arrondissement, around Saint-Charles station, and the second, around the port. In this position, the building becomes a gateway to both the old city and the new Euroméditerranée park created under a large-scale public urban transformation programme that began in 1995. A number of areas in the city of Marseilles, especially on the waterfront and in the southern part of the city, are involved in this profound renewal process that has led to the construction of works designed by prominent international architects: from the mirror-glass Pavilion by Foster + Partners (2013) to Zaha Hadid’s 2010 Cma Cgm Tower, from MuCEM, the Museum of Civilisation of Europe and the Mediterranean, by architects Rudy Ricciotti and Roland Carta (2013), to the Vieux Port project by Norman Foster and Michel Desvigne (2013), from Stefano Boeri’s Villa Méditerranée (2013) to the Docks by 5+1AA, now Atelier(s) Alfonso Femia (2013), and from Kengo Kuma’s Frac (2013) to Massimiliano Fuksas’s Euromed Centre (2013) and the Marseillaise by Atelier Jean Nouvel (2018).

In this highly stratified, heterogeneous area by the new city park, at the point where the motorway blends into the city traffic and the hills that surround the city appear in the distance, architect Stéphane Fernandez has designed a “silent” building: a big stone monolith that becomes a landmark in both the historic landscape and the heterogeneous new cityscape into which it is incorporated, which also includes the city’s other important and historic buildings, such as Fernand Pouillon’s university library, the church of Saint Lazare and the Porte d’Aix. The new building’s façade clearly reveals the importance of the presence of these important stone monuments in Stéphane Fernandez’s design.
The architects took into account all the neighbourhood’s difficulties and social conflicts, using architecture to promote essential values such as sharing. The big entrance hall opens directly onto the neighbourhood petanque playing field to offer opportunities for locals to meet and talk.
At the same time, to ensure the privacy of the 84 units in the residence and shelter them against their chaotic surroundings, the architects designed larger windows concealed behind the long, thin openings in the stone façade, adding to the building’s mass with these carefully studied vertical openings. The warm Mediterranean sunlight does not shine directly into the rooms, but creates a relaxing atmosphere favouring study.
In addition to the 84 living units for students, the custodian’s apartment and utility areas, the project includes a public elevator, which becomes a handy link for passengers coming from Saint Charles station and heading toward the Vieux Port, and a co-working space which serves as a link between the students’ activities and the Euroméditerranée park. A big terrace on the building’s top floor opens up to the city, offering panoramic views over the landscape with the Mediterranean Sea on the horizon. 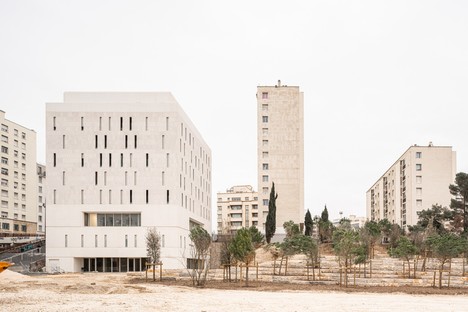 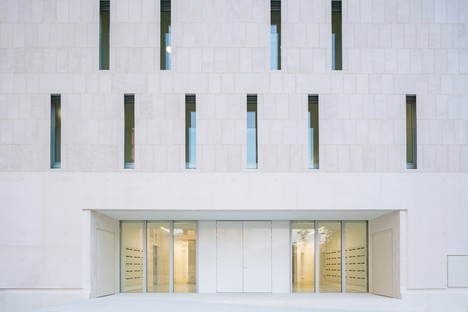 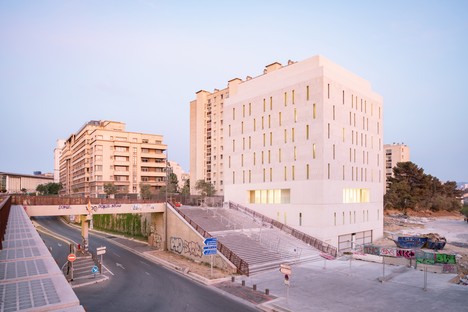 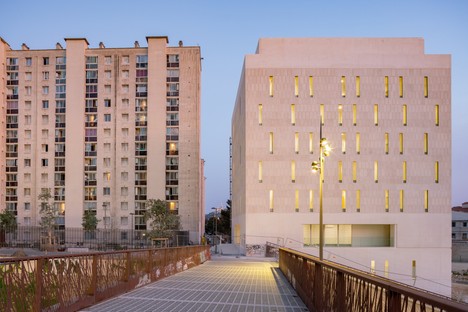 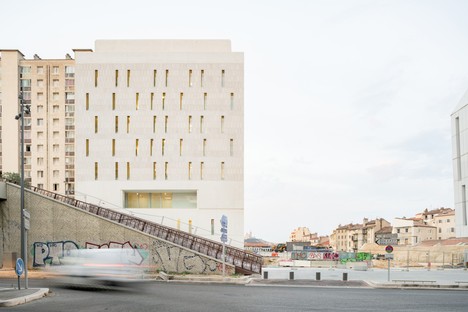 Related Articles: We are Content(s)