Alvisi Kirimoto designed Viale Giulini Affordable Housing in Zona 167, to the southwest of the town of Barletta in Puglia, Italy: a rigorous, sober building with a sculptural presence in a highly varied, messy suburb lacking greenery and architectural quality. Viale Giulini Affordable Housing fits into a wider-ranging series of projects for urban regeneration of the entire district which also includes a park and pedestrian district designed by ABDR, Parco dell'Umanità — Asse Pedonale Attrezzato. 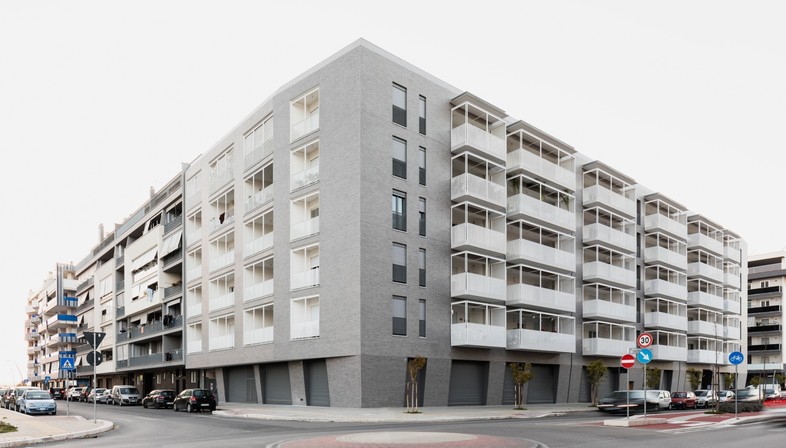 "Compact and down-to-earth architecture,” is how the architects of Alvisi Kirimoto’s studio describe the Viale Giulini Affordable Housing project completed recently on the outskirts of Barletta, in southern Italy. The building, constructed in the new Zona 167 to the southwest of the city centre, is a sober, rigorous, sculptural construction contrasting sharply with its highly various, messy surroundings in a province with little greenery and no innovative residential architecture.

Architects Massimo Alvisi and Junko Kirimoto, founders of the studio, have repeatedly addressed the issue of urban regeneration in their work with Renzo Piano and the G124 team and in projects completed in Italy and abroad, even setting up experimental research laboratories in retail centres designed for the outskirts of major Chinese cities such as Nanking and Shanghai.
In the Viale Giulini Affordable Housing project, the architects designed a C-shaped housing development totalling more than 5,000 sqm of floor space on six levels, built around a central courtyard. This courtyard, which covers more than 70% of the lot, provides the inhabitants with their own little park, an essential green space in a suburb with very little greenery; deciduous trees ensure that the park enjoys shade in summer and sunlight in winter.
In contrast with its highly varied surroundings, the building designed by Alvisi Kirimoto presents simple shapes and balanced colours, providing a quality response to demand for affordable housing.
Viale Giulini Affordable Housing contains a total of 50 residential units in three blocks, each with its own stairwell and lift, as well as underground parking lots and ground-floor retail spaces. The residential volume appears severe and monolithic, lightened by permeable metallic loggias following one upon the other at various different levels and extending outwards over the street, Viale Giulini. These open white elements amplify the available space, adding 10 to 15 square metres to each unit, while reflecting sunlight inside the apartments and adding motion to the extremely regular dark grey brick wall through carefully considered placement of windows and of the overhangs created by the white sheet metal of the loggias. Following the orientation of the sun to maximise the positive effects of natural lighting, the architects created overhanging balconies on the façade facing onto Viale Giulini, while on the other walls they subtracted space, hollowing out the volume to create loggias that are shaded from the sun. 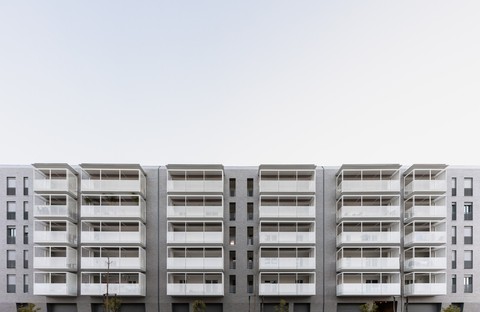 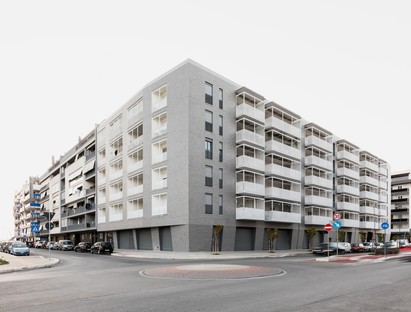 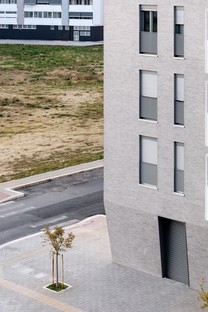 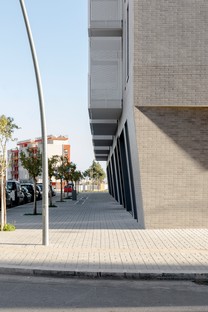 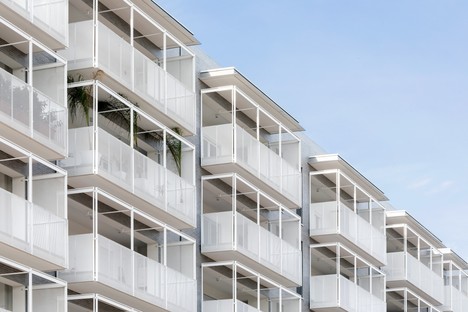 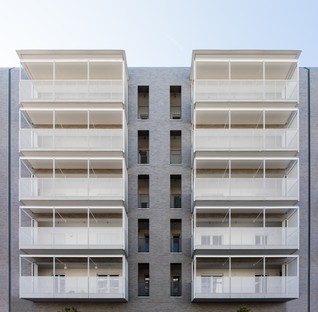 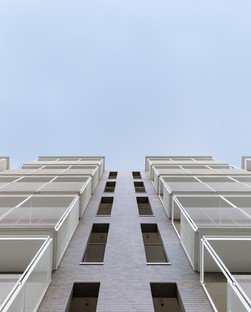 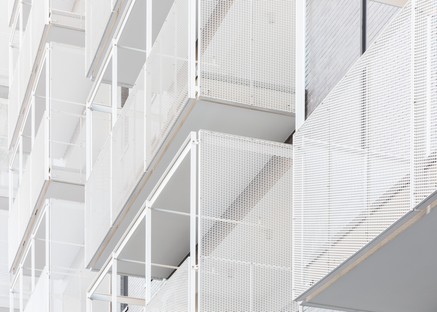 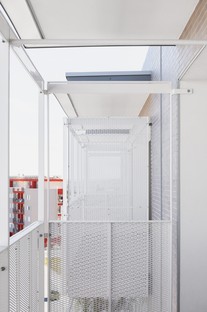 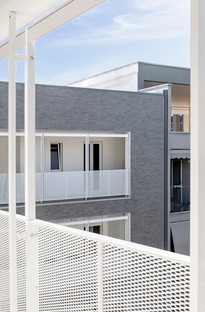 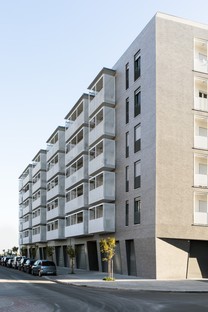 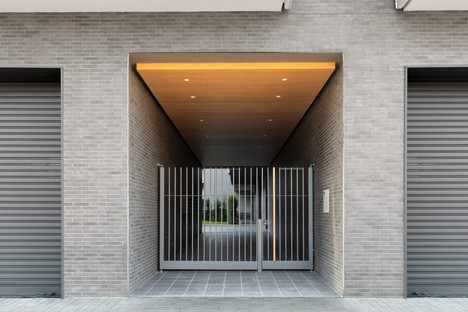 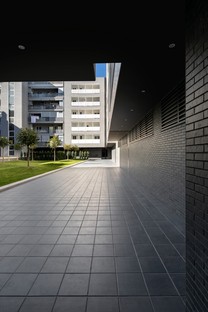 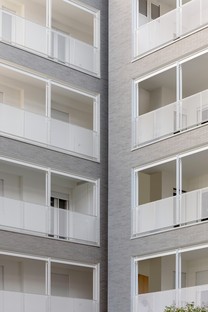 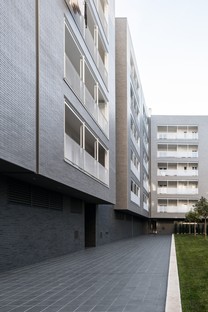 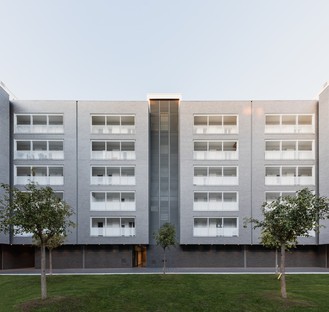 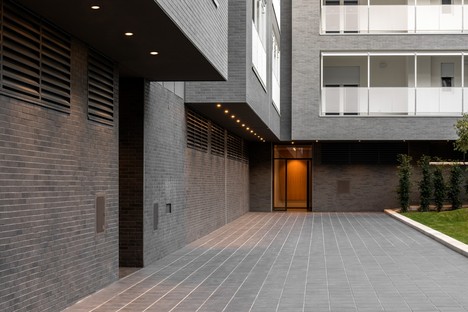 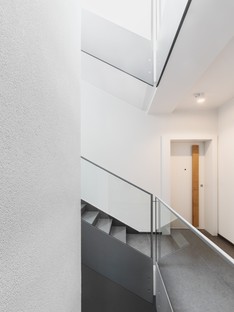 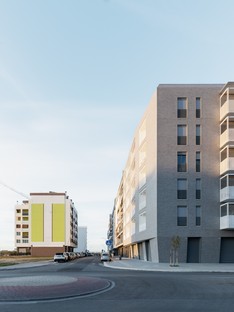 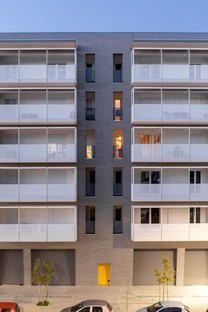