In the architecture of the Winter Park Library & Events Center in Florida, the arched shape of the pavilions has both an aesthetic and an environmental purpose. Marvellously inspired by birds’ wings, the shape contributes to passive cooling. 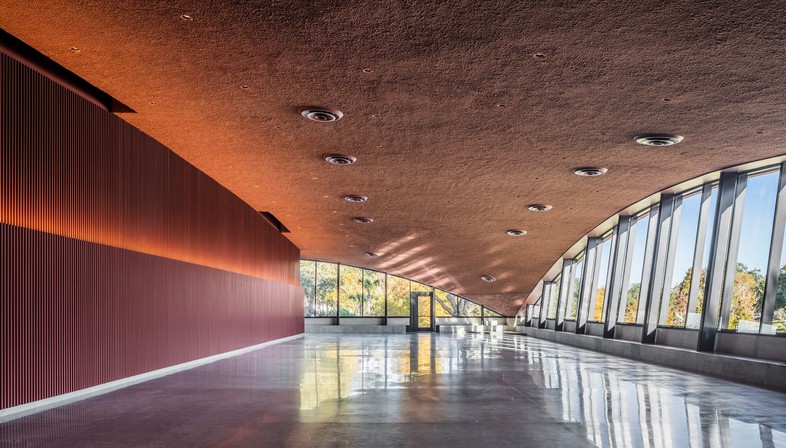 Considered an eminent architect of multiculturalism, leader of a team that has designed the premises of institutions, religious communities, and centres for the appreciation of art all over the world, David Adjaye completed his challenging new project for the transmission of culture, Winter Park Library Civic Center in Florida, in 2021. This was also the year in which he was awarded a RIBA Gold Medal, on which the commission commented: “Through his work as an architect Sir David Adjaye speaks confidently across cultures, disciplines, politics, and continents. His body of work is global and local, finely attuned as it reflects and responds to context and community, climate, and culture”.
Winter Park is considered one of the most beautiful cities in the United States, an “urban village” constructed in the late nineteenth and early twentieth centuries on the basis of a series of parks surrounding a chain of lakes, boasting a high quality of life and a strong sense of community. David Adjaye describes Winter Park as a place of old-world charm, with elegant homes, picturesque brick streets, plenty of greenery and quality services, from shops to schools and cultural institutions. In this case his studio responded to a request made by the entire community, asking for a public space for their library, which began as a simple collection of books in 1885 and is now a non-profit organisation renowned all over the world, an educational landmark organising highly participatory events.
The specific location of the new centre at the northeast corner of Martin Luther King Jr. Park, between Lake Mendsen and W Morse Boulevard, plays a key role, and in a way the new building acts as a fulcrum for the promotion of the community’s highest values. Right from the start, Adjaye considered it a symbolic gateway to the city, consisting of three pavilions, each built on a different scale and for a different purpose but all sharing the same formal language. A micro-village made up of different parts, a new library on two levels, an events centre with a panoramic terrace and an entrance arcade visible from the street, announcing the importance of the complex while at the same time acting as a filter between inside and outside.
The base on which all the pavilions rest was built for the same purpose, forming a citadel of knowledge acting as a belvedere over the lakes and the park around them. As part of a network of green spaces for the community, expanded following the redevelopment of the area, the new building encourages a friendly relationship between culture and nature. 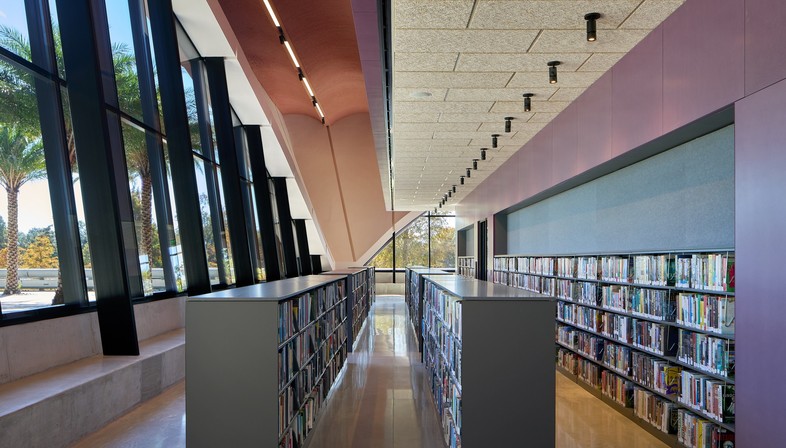 The three volumes share a single formal language. Imposing arches inspired by the wings of local birds and the forms of the region’s vernacular architecture form the outermost surface, completed by big inclined windows interrupted by black metal frames. These openings extend outwards to let in plenty of daylight and offer beautiful views over the park.
The studio paid plenty of attention to the building’s passive design. The jutting surfaces at its sides are designed to provide shade for the south-facing windows, while the heights of the internal walls are calculated to protect the archives from the strongest rays of the sun. The glass is angled to ensure that the sun’s rays strike it at a lower angle, reflecting more direct sunlight and reducing the amount of heat that accumulates in the building without limiting natural lighting.
The three pavilions are oriented toward each other so as to cast shade on one another: the events center shelters the library in the morning, and the library shelters the events center in the late afternoon. The rose-pigmented prefabricated concrete of the structure provides high thermal mass, absorbing heat and cooling the spaces where people gather to read and the community areas.
Though their floor plans differ, both of the main pavilions feature a grand spiral staircase in the middle, with the activities, walls or shelving units arranged around it. The library offers reading rooms accessible to people of all ages and abilities, interactive areas for children and young people, an auditorium, digital experimentation rooms, an enterprise centre and continuing education classrooms.
A rainwater collection and reuse system is used to water the plants around the centre, while solar panels produce electricity. A note points out that the materials used to prefabricate the façades were all sourced within 25 miles of the site, while all the materials used in the interiors are domestically sourced and the grounds feature vegetation native to the area. 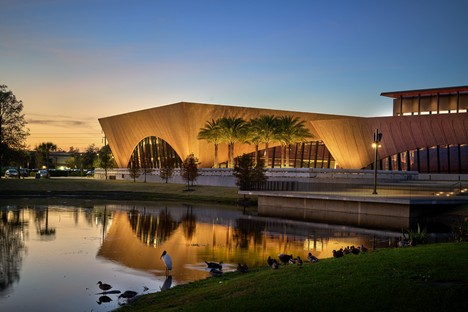 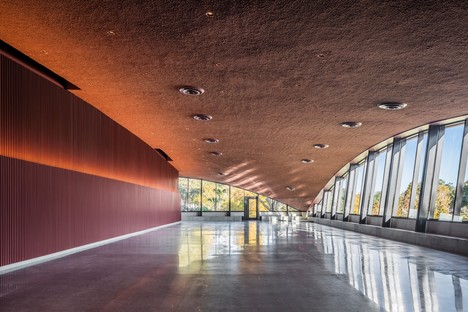 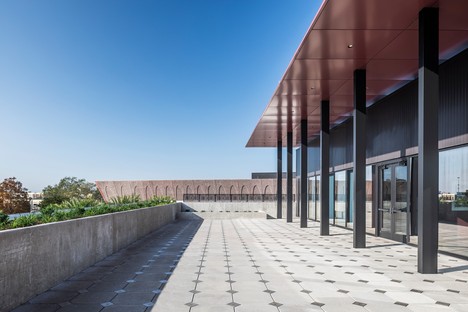 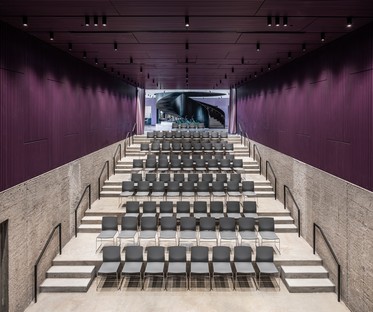 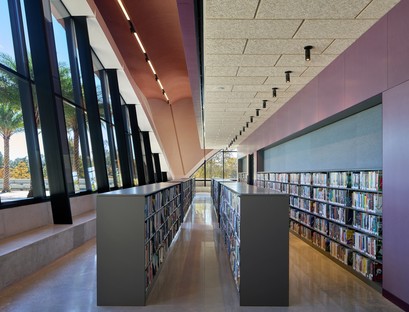 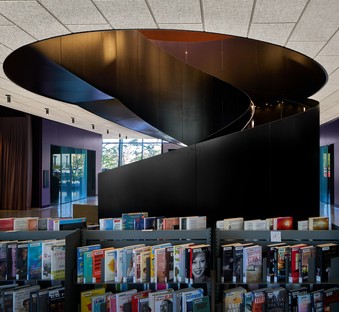 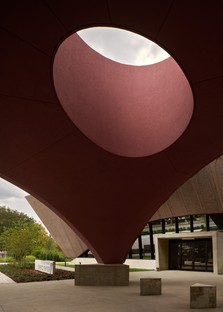 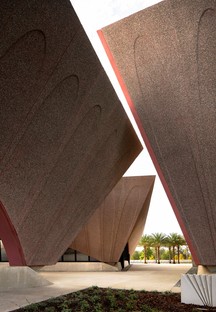 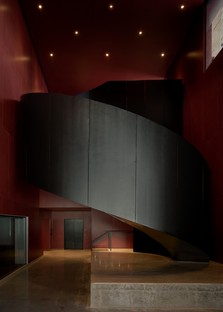 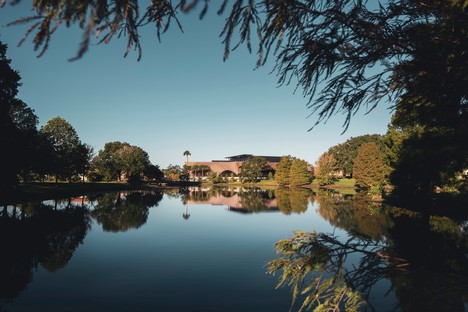 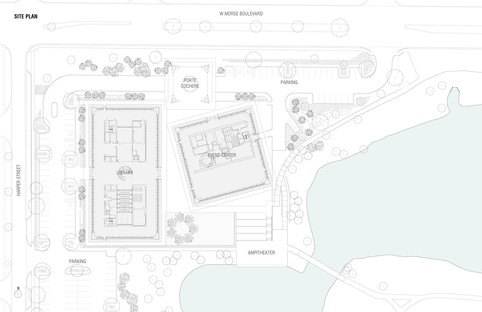 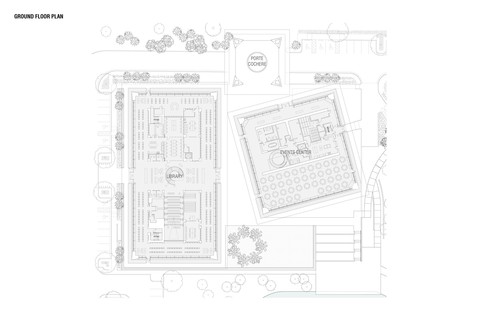 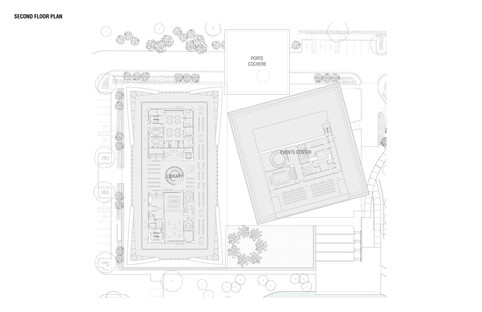 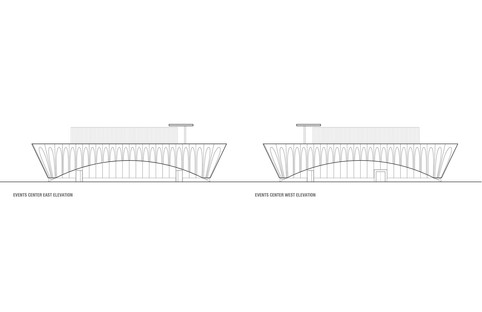 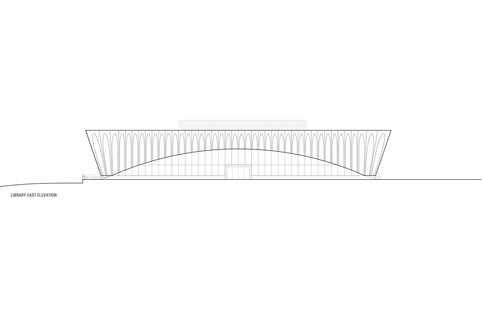 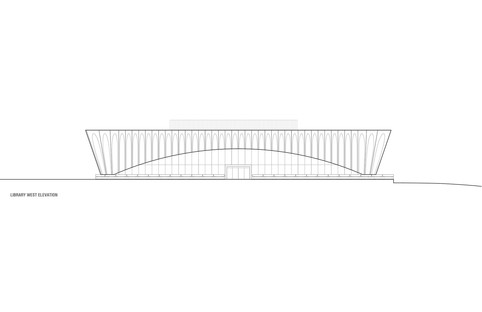 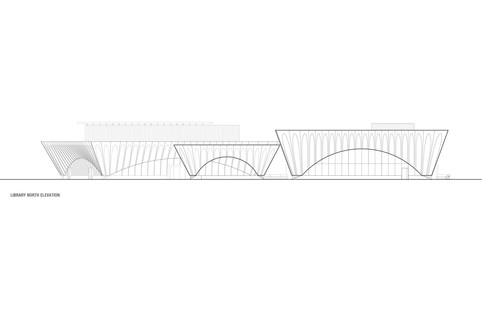 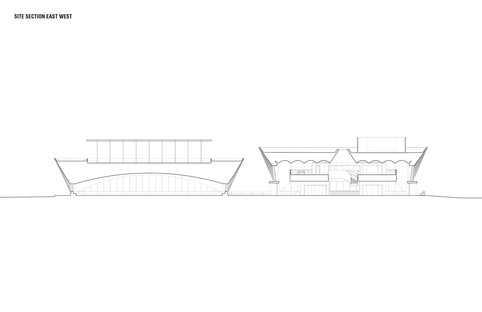 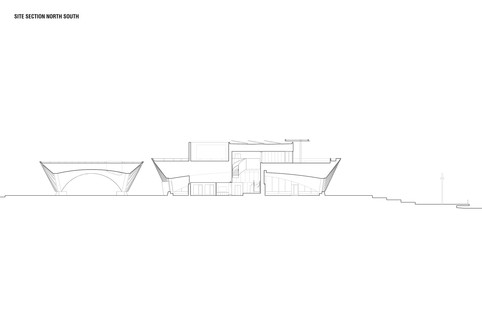 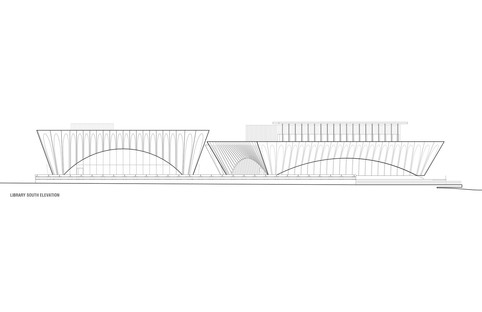 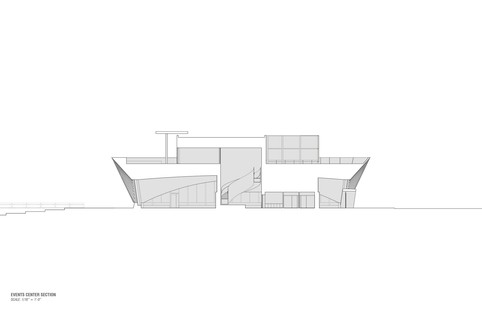 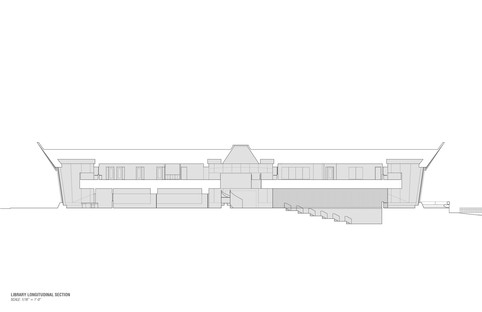 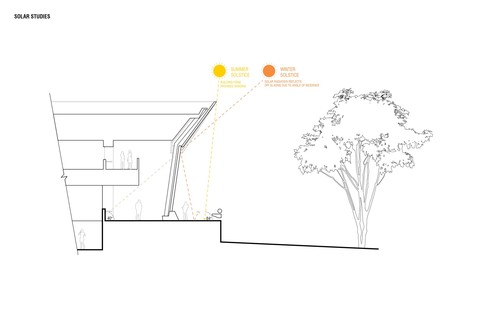