The new Vidy-Lausanne Theatre Pavilion is a 250-seat hall made entirely out of wood using innovative low-tech joints. The experimental project was completed by Yves Weinand, head of the EPFL’s IBOIS research laboratory. 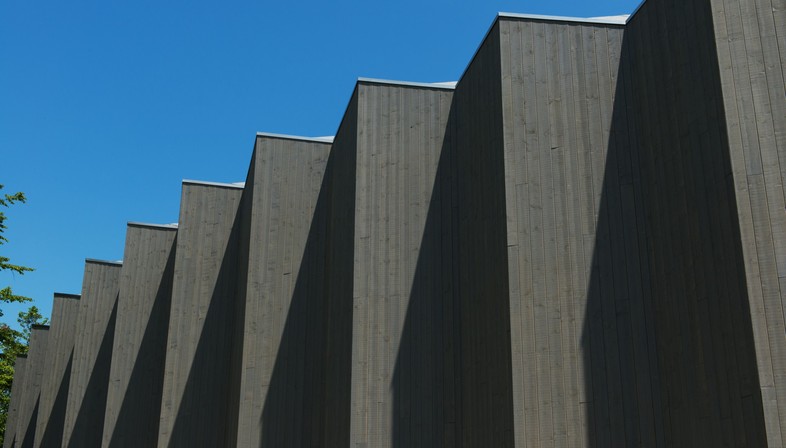 The new pavilion that opened in 2017 beside Lausanne’s historic Vidy Theatre is made entirely out of prefabricated wood with a surprising origami-like architectural style, designed by Yves Weinand with the IBOIS research laboratory at Ecole Polytechnique Fédérale de Lausanne (EPFL).
A new evolution of the Modernist idea of the building with a modular structure, Yves Weinand’s “Pavilion” is an expansion on Vidy Theatre, designed by Max Bill as a temporary construction for Expo 1964. Standing on the shore of Lake Geneva, the Vidy was never taken down, but transformed into a permanent theatre by director Charles Apothéloz. As part of a general reorganisation of the institution a number of years ago, the Pavilion replaced a temporary tent that had become unusable, in an attempt to maintain the idea of lightweight, economical architecture which is easy to assemble and take apart again that characterised Max Bill’s original building.
At least as shocking as the theatre’s metal structure appeared to be at the time it was built, the new pavilion is a compact shell made entirely out of wood which on first sight appears almost like a sculpture on an architectural scale, standing out in the garden of the cultural complex. In actual fact it is a very low-tech composition: 11 sections consisting of beech plywood panels, assembled with innovative wood to wood double tenon joints with no metal parts. Consisting of two walls with an arched roof, each section has a double skin, both structure and cladding, and is resistant enough to limit shearing force. The 210 mm gap thus created contains cellulose wadding made from recycled newspaper, providing thermal insulation. Digital modelling of prefabricated elements allowed EPFL’s IBOIS laboratory to obtain a wooden weight-bearing structure that extends over a distance of 16-20 m with no need for pillars, with a panel thickness of only 45 mm. The Pavilion’s fascinating origami layout and 250 retractable seats make an excellent addition to the three permanent halls that originally constituted the Vidy Theatre.
With growing awareness of the need for use of natural, renewable building materials, wood has become an increasingly popular topic among researchers, particularly in Switzerland, with its abundant forest resources. In the Pavilion at Vidy Theatre, innovative wood to wood joints perfected by Yves Weinand himself in the laboratory are applied on the scale of a building for the very first time, developing a special prefabrication process for the purpose. The wood to wood joints are cut in the factory as integral parts of the panels in a single mechanical operation. Once assembled with newly developed double tenon joints ensuring rapid, precise connection, the modules alone provide all the solidity the building needs and minimise use of metal joints.
Yves Weinand says that highly detailed planning through digital modelling significantly improved the speed and performance of the production process, kept under control at all stages. Customised prefabrication allowed the building to be constructed very cheaply and limited its overall ecological footprint on the land. Construction took about a year, but the new pavilion structure was assembled in just 10 days by 6 workers with a single crane. The standardised process offers plenty of potential for wooden buildings of the future.
This project demonstrates once again that the idea of prefabrication as synonymous with standardisation, with banalisation of form, is now obsolete, and that the principle of prefabrication can be transformed with outstanding aesthetic developments. The lesson of Max Bill continues to be relevant, as theatre director Vincent Baudriller notes: "The building’s architectural structure determines both technique and appearance. Here we may find the notions of concrete art that Max Bill always supported”. The new pavilion carries on the spirit that has characterised the Vidy ever since it first opened: an emblematic building, standing on a sliver of earth that was once a marsh by Lake Geneva, reclaimed for Expo 1964 and now the pride of French language theatre in Switzerland. 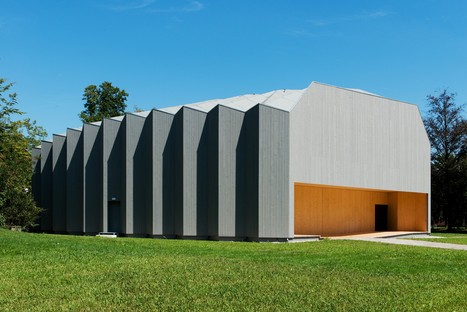 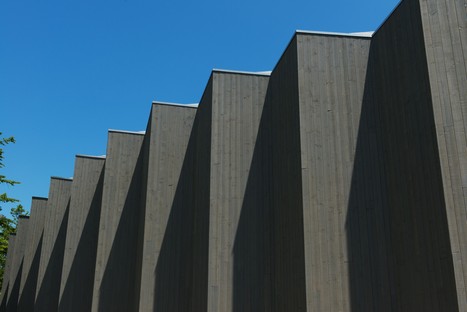 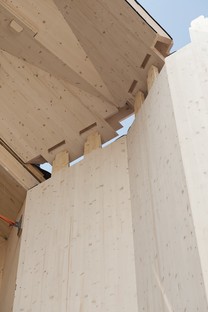 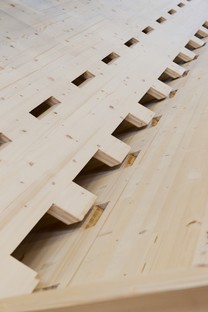 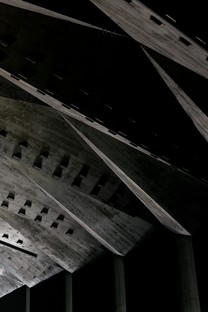 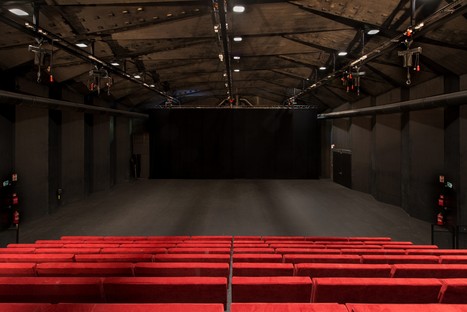 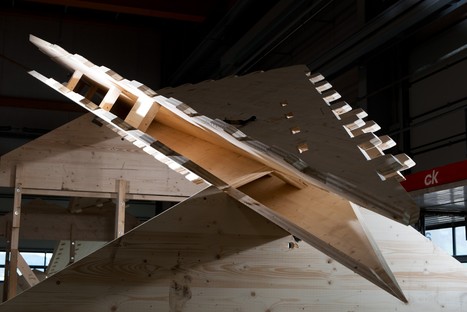 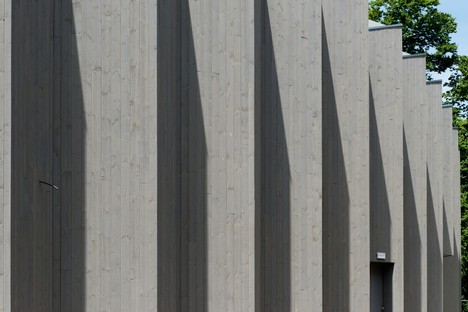 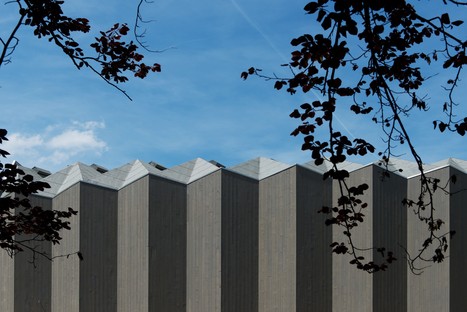 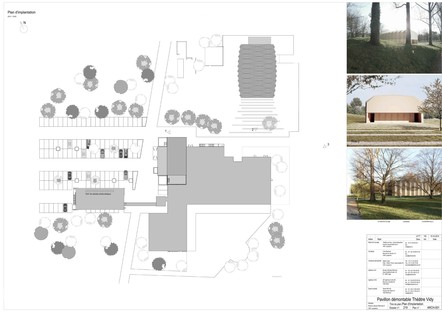 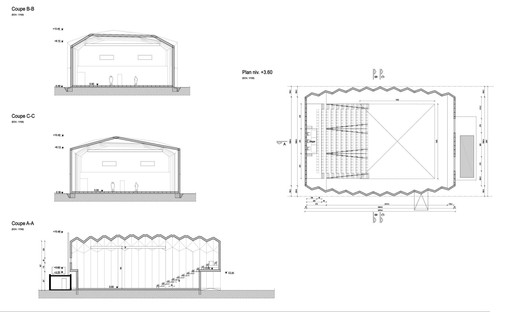 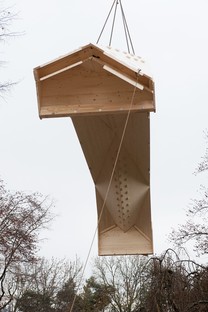 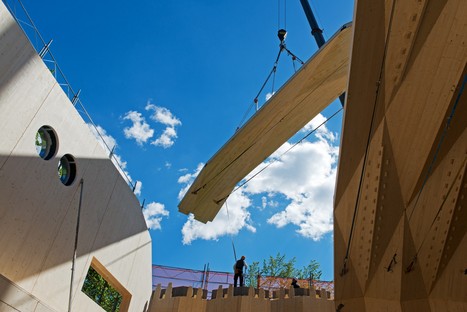 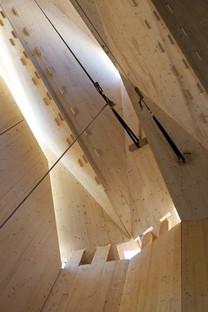 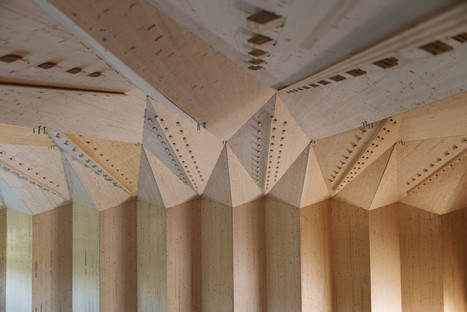 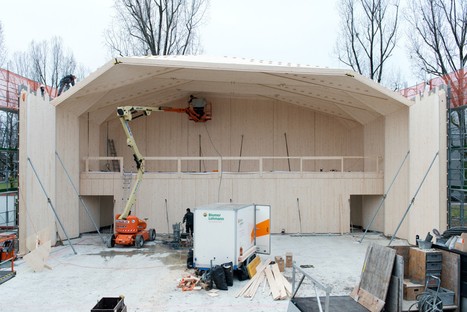 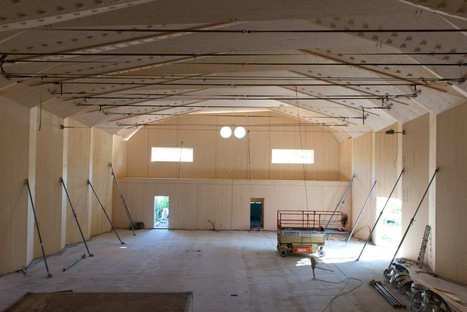