The decomposition of volumes is the go-to approach taken by up-and-coming young firm Yonder, based in Stuttgart. In Haus S in Oberreute, southern Germany, a dedicated sauna pavilion stands separated from the main building, thus resolving size-related constraints and preserving the idyllic rural setting. 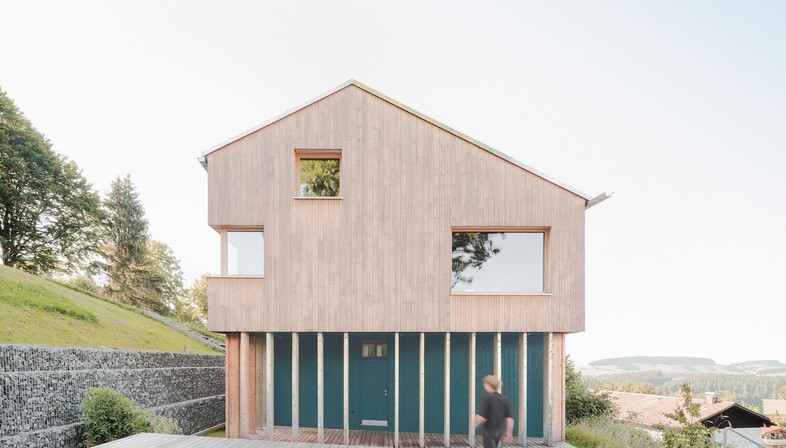 In this second project by Stuttgart-based firm Yonder - Architektur und Design in Oberreute, Haus S, the architects once again find themselves pondering the evolution of the traditional home of the Allgäu, a vast geographical area in the south of Germany. Katja Knaus and Benedikt Bosch originally met whilst working for Behnisch Architects and in 2012, they decided to set up a firm of their own in Stuttgart.
Their first foray into the small town of Oberreute - notable for its distinctive sloping façade overhanging the courtyard - was a new-build villa redolent of the spirit of a typical Allgäu farm. Amongst the many common aspects shared by the two creations, such as their exposed wooden structure and the lack of any interior coverings, perhaps the most crucial is the idea of forming a courtyard as an extension of the spaces of the house. Yonder is well-versed in the conceptual operation of splitting the architectural volume up into functional blocks in order to identify which ones can be eliminated, and in so doing lightens the impact of the whole whilst at the same time creating a functional void.
This is also the approach taken in Haus S, a single-family home in the small area of Irsengund, located along the main road that leads southwards out of the village of Oberreute. The plot in question is, in theory, considerably large - 1300 square metres - but due to the distinctively steep slope on which it sits, only a very small portion of it could actually be built upon. The client wanted a holiday home capable of accommodating up to six people, and as such the first plan submitted to the local authority focused on the possibility of developing upwards, with two main levels and a third loft floor. The pitched roof with no overhang and open façades overlooking the rolling Allgäu hills and towering peaks of Vorarlberg would have both respected the local language and promoted a dialogue between the building and the surrounding landscape. The architects even envisaged the possibility of adding additional levels in future, keeping the size of each floor the same and not affecting the house’s overall footprint.
But the local administration ultimately denied them planning permission, specifically due to the ratio between the surface area and the height of the volume to be built. With no compromise on the client’s request for more covered space, Katja Knaus and Benedikt Bosch instead opted to break up the volumes, literally shifting one of the two floors southwards to run along the new plateau. As such, their proposal resulted in a house with a pavilion in the garden, forming two sides of a courtyard, with the third naturally formed to the west by the mountainside. Ultimately, the overall height of the house was reduced by just one metre, according to the architects, but the local council accepted the new proposal enthusiastically nonetheless.
What’s more, with this, the project also contributed to necessary efforts for rural consolidation and was able to save the magnificent old tree located on the plot, literally placing it at the heart of the annexed pavilion, which has been designed with a semi-circular all-glass entrance. Clad with wooden planks, the courtyard has become something of a small square, a two-stepped terrace which also offers a seating system, a panoramic viewpoint and a place for conviviality.
Whilst the outbuilding was designed exclusively to house a sauna, the main section of the home is reserved for the actual living quarters. Access is provided via a flight of wooden steps located lower down the road, where an elegant metal-roofed shelter protects a parking space. 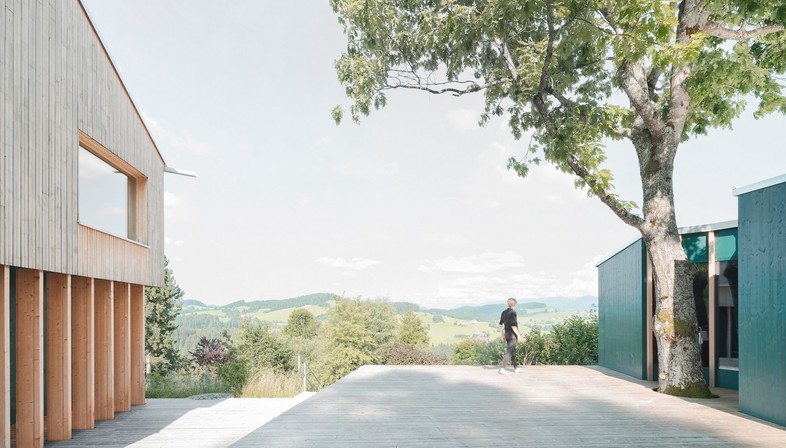 The house has a wooden structure consisting of an upper section - with one floor and a loft level, finished with slim fir wood planks - and a lower floor, clad in deep green boards, that is set back slightly and reveals wooden supports, almost as if to imitate a structure on stilts. These supports extend up and over the terrace to form a portico, whilst also featuring in the semi-circular glazed front of the sauna pavilion.
This is not only a feature that unites the two elements into a coherent whole, but also one which - combined with the choice to stagger the orientation of the roof against the walls - lends the architecture a certain dynamism and lightness. The choice of emerald green for the ground floor also establishes a close relationship with the natural hues of the garden and the mountain against which it has been built.
The interior layout places the sleeping area on the darker, more contained ground floor and all the shared spaces on the first floor. Finally, the loft level allows for a gallery of sorts to be suspended over the living room, used as a hybrid room. One particularly intriguing choice involved placing all the internal walls on a diagonal slope, following the flow of the roof rather than of the perimeter walls, as this has resulted in the rooms having a differentiated floor plan in which the architects could carve out larger spaces where necessary - such as in the kitchen - as well as small, private alcoves, such as in the sitting room overlooking the valley.
The contribution to rural consolidation and tree preservation were not the only aspects of this essential wooden construction designed with a view to environmental sustainability. By eliminating the impact of sound insulation, the structural surfaces of the ceilings and floors were able to be left untreated and exposed, with no additional coverings needed. A bivalent heating system, in which an air-to-water heat pump provides the base load and a thermo-fireplace in the living room supplements with the peak load when outside temperatures plummet, makes for an efficient and economical heating solution. 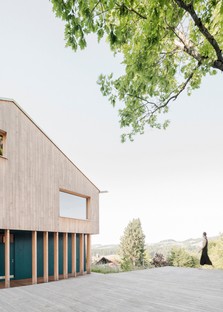 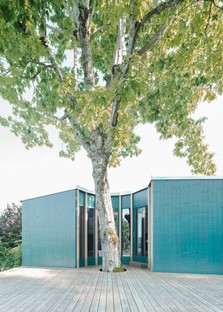 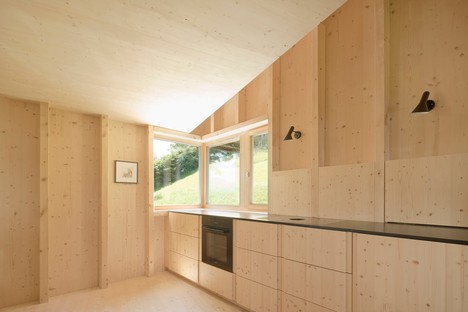 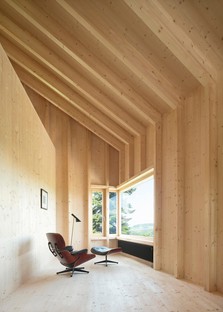 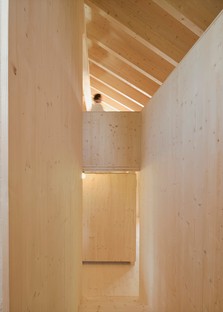 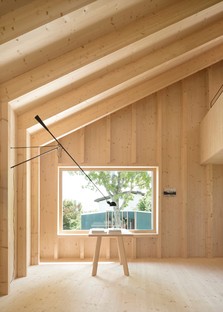 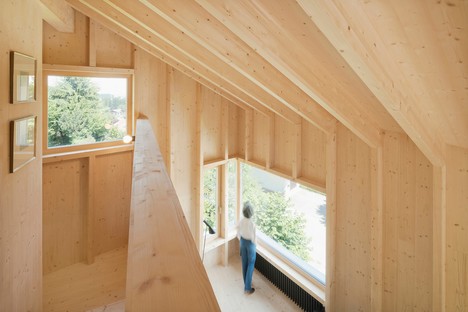 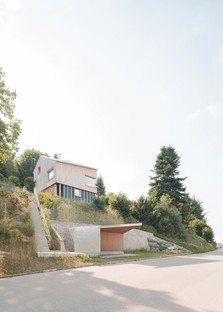 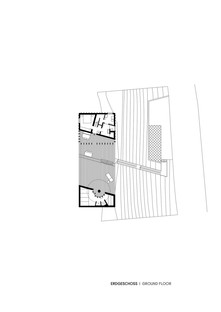 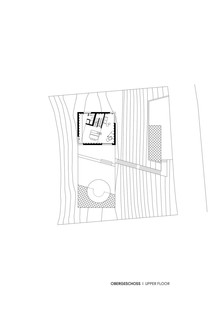 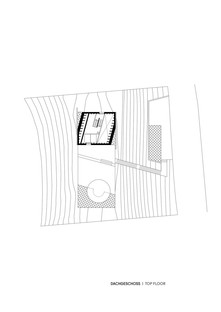 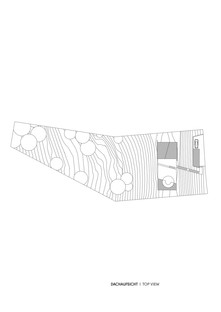 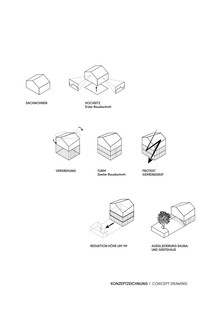 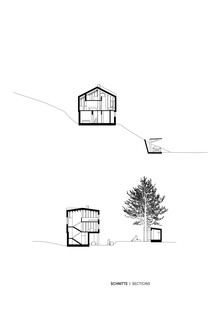 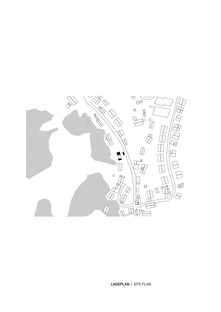