Valvigna: the twenty-year partnership between Prada and Guido Canali

Guido Canali has created a new project for Prada: a garden factory in Valvigna amplifying the architect’s and the company’s excursus into ethics, architecture, work and landscape, which began in 1999 and still continues. 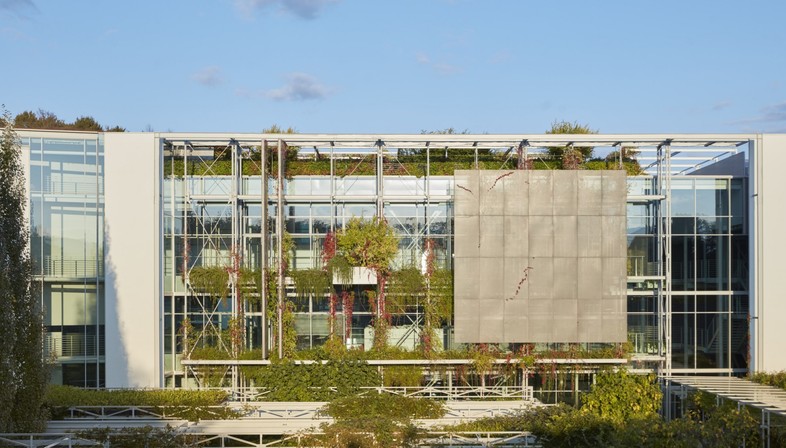 From Depero and Campari to Behrens and AEG and Sottsass and Olivetti, there are plenty of examples of successful partnerships between great artists or designers and great brands. Prada’s partnership with Guido Canali is one such example. The two started working together twenty years ago, in 1999, when the architect from Parma designed the fashion giant’s Montevarchi factories; after opening the company’s facilities in Montegranaro (2001) and Levanella (under construction), Canali has designed a new industrial plant in Valvigna.
Valvigna expresses a recurrent theme of Canali’s work for Prada, the garden factory. The plant is home to Prada and Miu Miu’s leather goods production and development divisions and raw materials warehouses. It also contains the Prada Group’s data processing centre, the company’s historical archives on footwear and leather goods, technical and administrative facilities and even an auditorium. A mere operative factory would have been insufficient: being a major brand brings a lot of responsibility, and in this facility Prada and Canali are clearly stating a message for the world. The project involved upgrading of a degraded area, mitigating the plant’s impact on the landscape and even improving the environment for the people who live in the area.
“The massive presence of greenery, underlined by pools of water which also serve as a reservoir of energy, is an integral part of the plant. Not displayed merely as a decoration, the vegetation is treated as an essential condition for the wellbeing of the people who work in the facility. This is a form of architecture that rejects gratuitous acts of exhibitionism but stays true to a rigorous criticism rooted in Rationalism, eliminating and decanting. And so the fascinating secret gardens, pergolas shaded by grapevines and pools of water are not there for the architects’ own formal satisfaction but out of respect of the physical and mental health and the dignity of the people who will be working between those walls and those gardens.”
The vision that gave unity to the intent of the owners and the architect is based on three pillars: respect for work and workers, "uncompromising quality" and acknowledgement of the importance of detail as an expression of efficiency, rather than an aesthetic frivolity or an end in itself. These three pillars define an ethic "developed jointly over twenty years of working together, introduced spontaneously at a time in history when acknowledgement of these values was not yet considered a duty,” says Prada Group CEO Patrizio Bertelli.
The history of Valvigna began before Canali and Prada started working together, in 1998, when the Group purchased 30,000 sqm of land in the province of Arezzo. A disused roof tile factory stood on a lot requiring redevelopment. Over the years the owners waited patiently for the adjacent lots to come up for sale, to make room around the factory, and started planting trees on them, creating a new look for this piece of land situated close to the Autostrada del Sole, a busy motorway.
In front of the factory are big parking lots and roads. The architect set the building back from the road and added an intermediate curtain of three terraces planted with grapevines, so that the ground floor of the building disappears from view and the factory sits on this new level 8 m above the yard. This horizontal sign marks the entire length of the lot, becoming permeable to the sight, so that the volume to be concealed disappears. The back of the building was harder to design: the space is narrow, the hillside uneven. For this reason the offices and cafeteria are closed-off to the outside, but open onto the inner patios and cloisters. Finally, the original gently rolling hills were recreated by altering the slope of the land, ensuring hydro-geological stability. A system of lightweight pergolas covered with grapevines and dotted with mulberry, pomegranate and jujube trees alternating with lavender beds surrounds the parking lots, completely filtering the view. As the factory is being build, the hill is being re-built, in dialogue with the newly restored landscape around it.
The project expresses an almost religious awe of nature, safeguarded and restored, and for human effort, acknowledging the value and dignity of work. As we noted at the beginning of this article, Prada and Canali offer an ideal example of a successful long-term partnership. 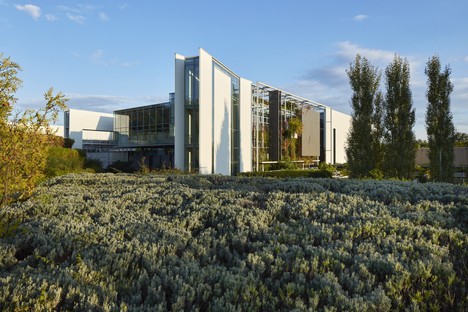 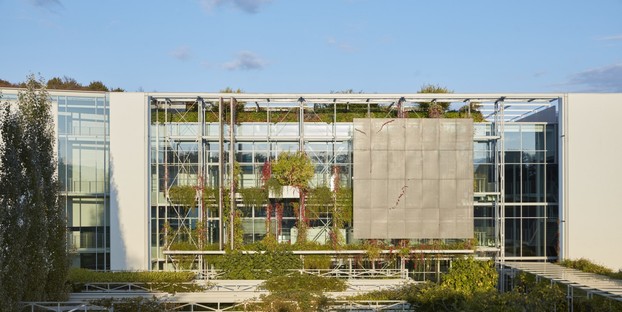 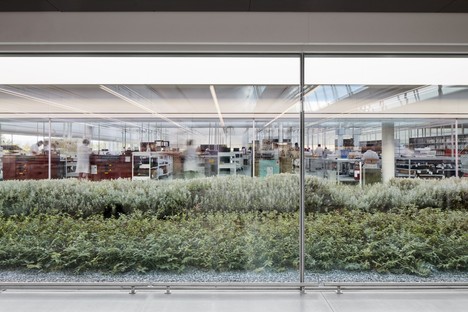 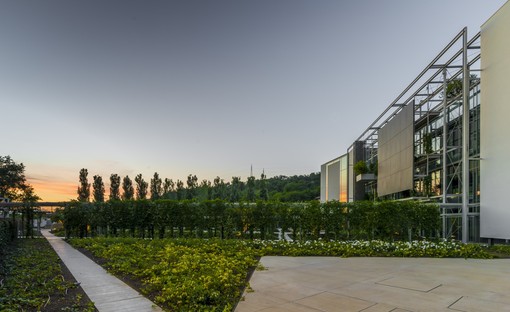 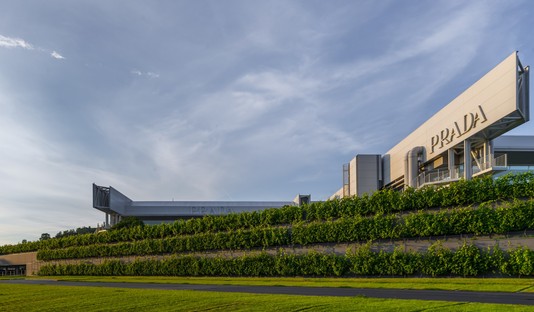 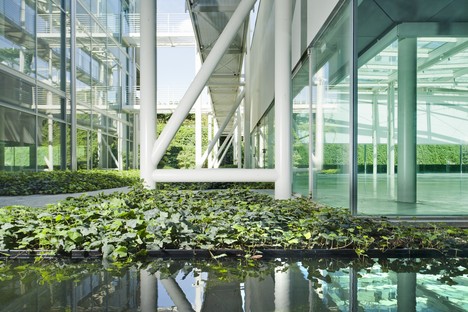 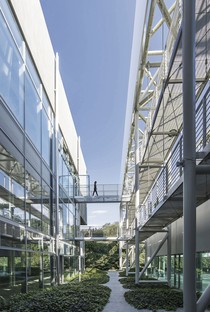 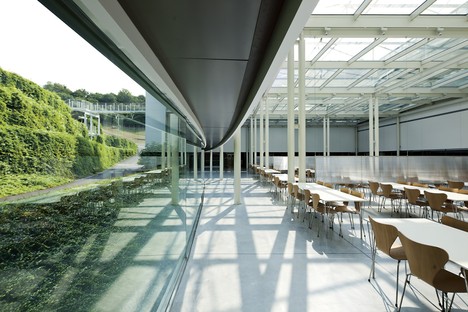 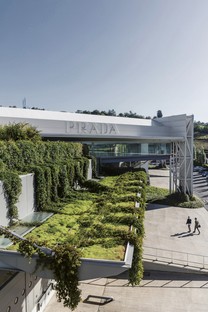 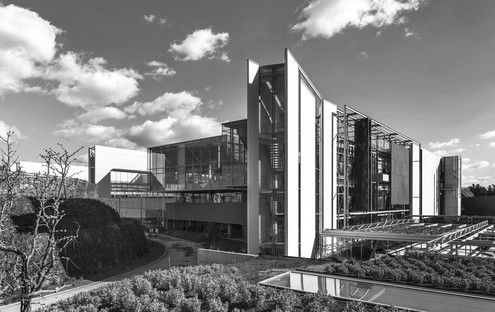 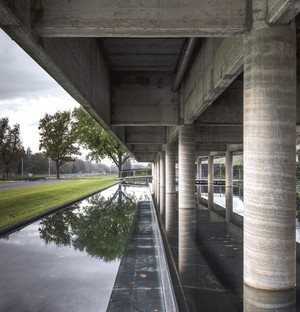 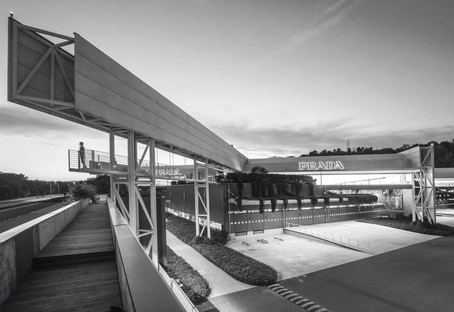 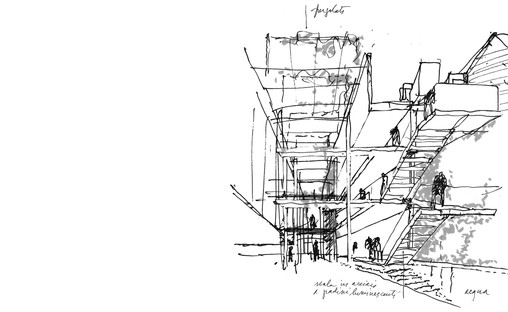 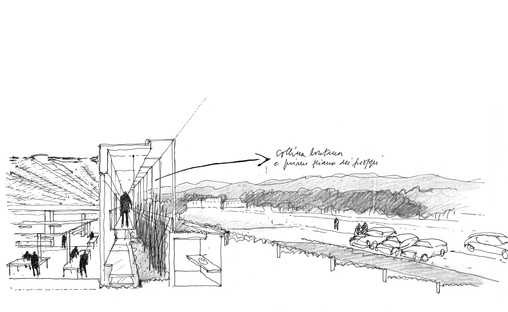 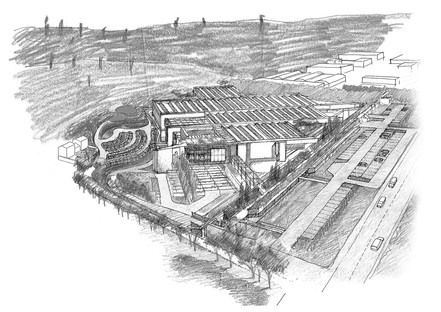 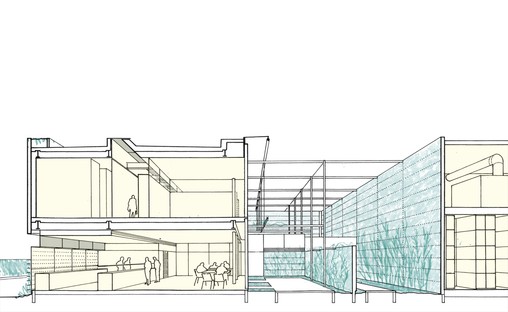 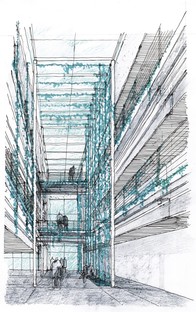 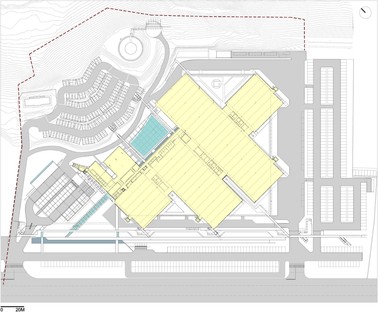 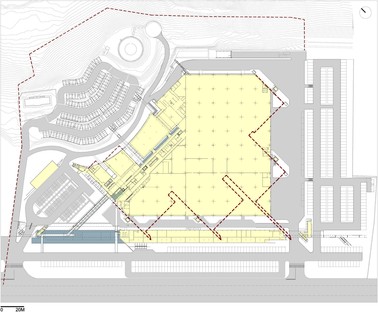 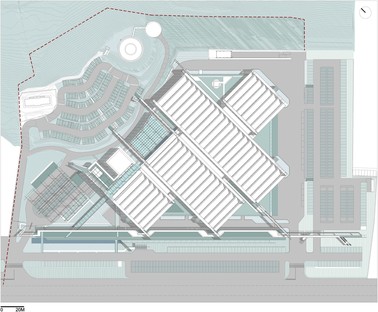 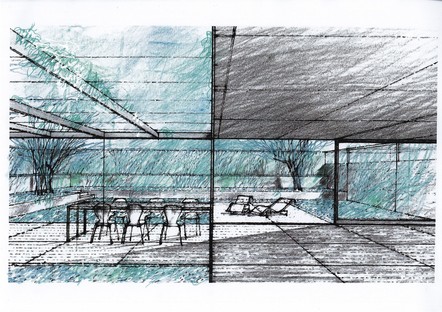 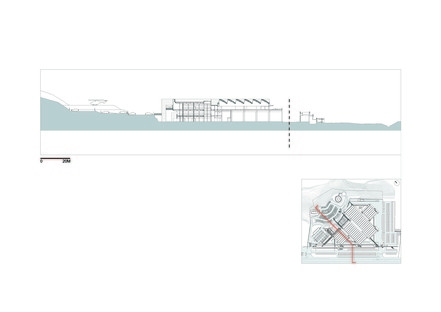 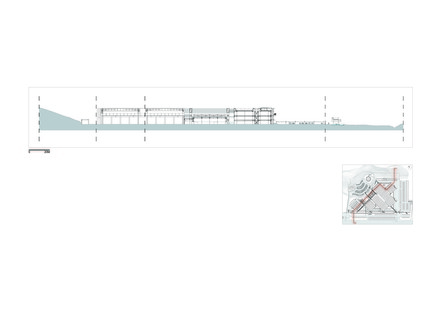 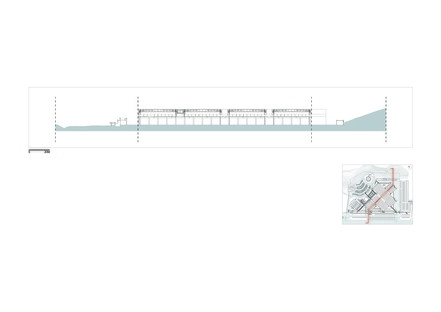