Part of a major redevelopment project, in the unused area of the convent of the Redemptoristines in Riom, France, the new Cinema Arcadia is an interesting blend of historical references. Designed by TRACKS, it marks the first project completed by the Jardins de la Culture cultural centre. 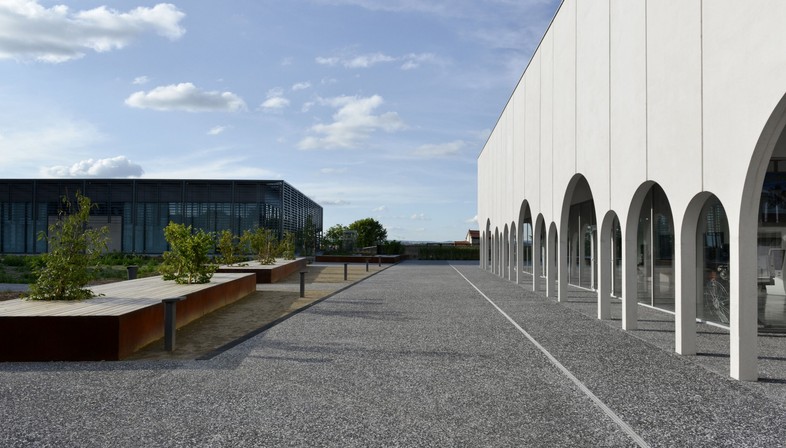 TRACKS architecture firm has been involved in a wide-ranging public project as part of which it has been commissioned to create the new Cinema Arcadia in the French town of Riom.
The urban community of Riom Limagne et Volcans was created on 1 January 2017 as part of the interdepartmental cooperation project of Puy-de-Dôme, merging the communities of Limagne d’Ennezat, Riom-Communauté and Volvic Sources et Volcans, involving 31 municipalities overall with a total population of 68,000.
Amongst the various projects set in motion following the establishment of the community, there is one which has an especially marked cultural value, the creation of the so-called Jardins de la Culture, an interdisciplinary hub housed on the site of the former convent of the Redemptoristines, not far from the historical centre of Riom. Built in the seventeenth century, this complex has played host to several religious orders and, with the departure of the Redemptoristines in 2011, the architecture was acquired by the urban community and earmarked for public use; as such, it was subject to a targeted restoration project.
The Redemptoristine building is located on the south-west corner of what was, until just a few years ago, the convent’s private park, surrounded by walls made from local Volvic stone, a material which went nigh unused until the Jardins de la Culture project was born. The size of the site made it a perfect fit for the need to bring together different forms of culture and have them converge in a location which is symbolic due to the great historical value it holds for the town of Riom.
The opening of the Cinema Arcadia, designed by TRACKS on the east side of the site, is just one of the cultural functions offered by the centre. Spread over an 11,000m2 plot, it includes the setting up of the municipal schools of music and plastic arts in the building of the old convent, designed by A.C.A. Architectes et Associés, which will be officially opened in spring 2020.Additionally, it involves the construction of a media library and the relais assistants maternels (RAM), i.e. the information centre for childcare opportunities, located to the north of the area. Designed by Francois Guibert Architecte, this steel and glass volume was opened at the start of 2019. In the old chapel in the north-eastern corner of the plot, an exhibition hall was set up and, around this and in the centre of the site, the Spaces Landscape Urbanism firm designed the greenery to be a connecting element between the parts which are functionally separated. 5,640 square metres, split between a ‘jardin à la française’ and a ‘jardin calme’, connected by an open space to host cultural events. An underground car park with 82 spaces serves the entire cultural centre.
The Riom administration’s general intention was to create a cultural centre just outside of the historical centre located on the road that leads to the Hotel de Ville and the Basilique Saint-Amable. Working in synergy, these structures aim to create a sort of new centre which is both inclusive and full of life, perfect for attracting children, young people and adults, providing a home for the worlds they inhabit. Research for the design has been oriented towards a delicate blend between the restoration of historical buildings and their transformation, making them suitable for a modern-day use that could involve the city and the language of today’s architecture. The arches, internal courtyards, stained-glass windows and Volvic stone which characterise the 17th-century complex have, in the musings and ideas at TRACKS, formed a sort of horizon to be juxtaposed with materials such as concrete, which is both cost-effective and mouldable.
The concept of exchange with the town has led the designers to the idea of the permeability of the structure, starting with the opening of new arched doors in the walled enclosure to the south, which overlooks Faubourg de la Bade. The community can thus take possession of the garden inside, whilst the series of arches leads to the entrance to the area and the new cinema building.
The Cinema Arcadia was the first Jardins de la Culture project and was inaugurated in December 2018. Not a multiplex, suitable for a commercial area - says the mayor Pierre Pécoul - but a place for culture which is appropriate in both size and nature for its context, for its proximity to the city centre, and for its visual relationship with the historical convent. Three screens with a total of 543 seats and a 112-seater conference hall, in a block that would seem simply elementary were it not for the interesting reference to the theme of arches which can be found in the concrete portico. Following on from what was obviously intended to be the symbol of the new purpose of the site, the sequence of arches with differing proportions and slender pillars is a nod to both its figurative history and the presence of greenery, which seems to be schematically echoed in those exquisitely slim columns.
One can therefore understand the inspiration for its design, which identifies this front as an ideal continuation of the structure of the convent’s cloister, however the formal result of this white portico, façades of body-tinted concrete which seem to melt into the pillars, takes on a graphic value. The apparent two-dimensionality of the front is even more evident in the nocturnal image shot by the photographer Guillaume Amat, in which the physicality of the architectural volume disappears completely and the only thing left is the arched silhouette of the portico. Illuminated from the inside, the arched profiles recall the cinematic visuals of the first half of the 20th century and the illustrated posters, perhaps celebrating a time when going to the cinema was considered the most sublime occasion to fully experience city life. 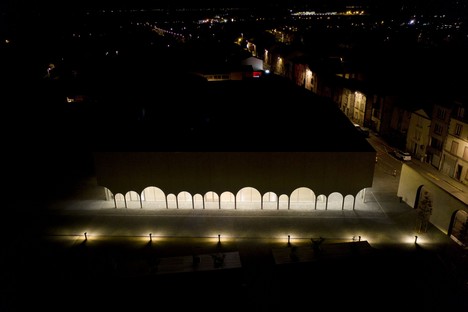 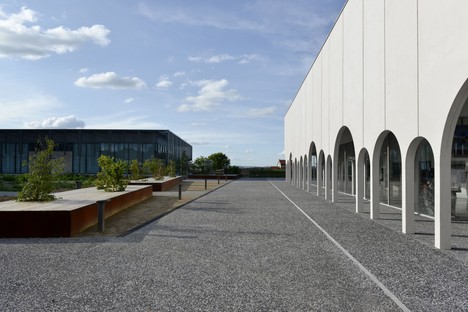 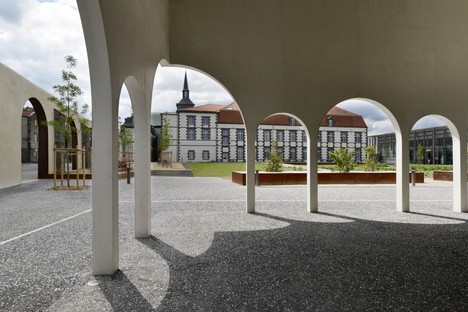 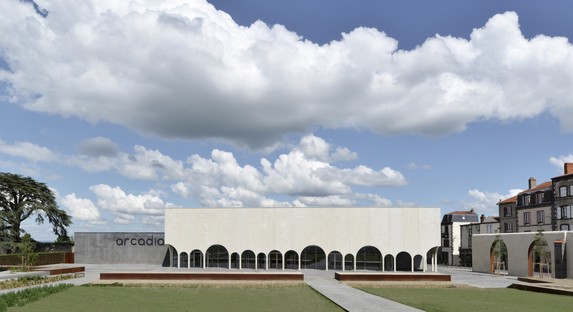 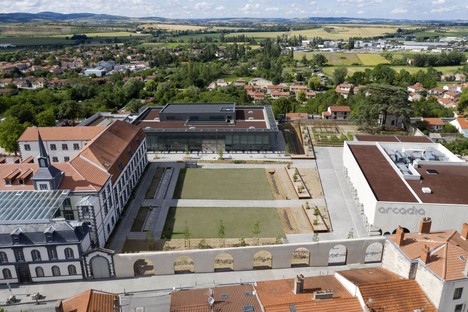 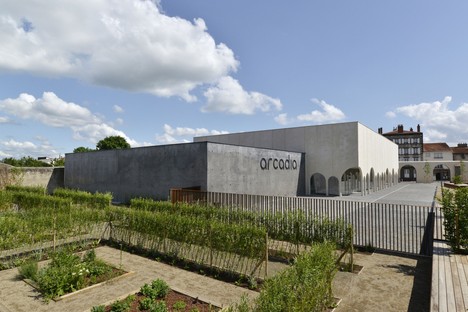 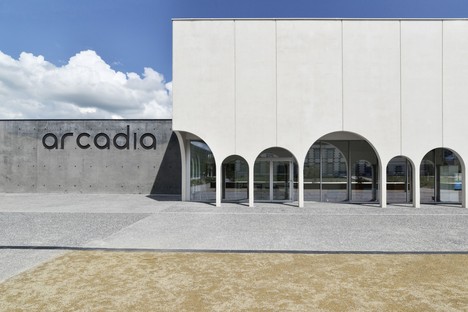 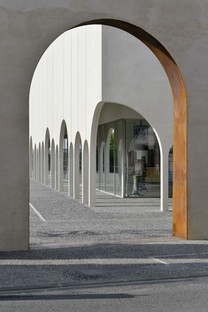 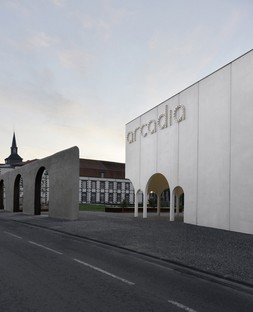 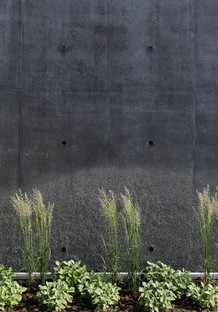 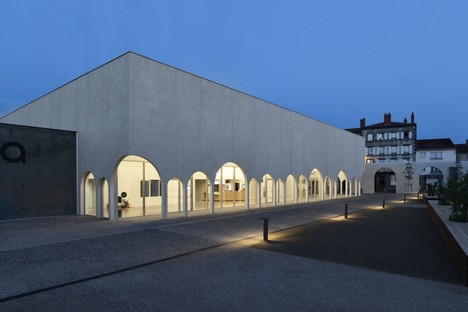 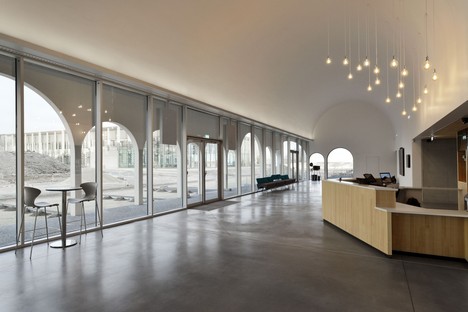 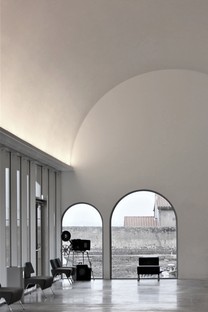 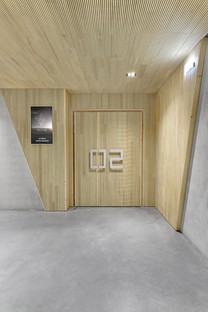 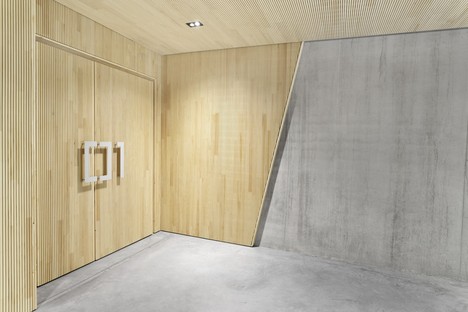 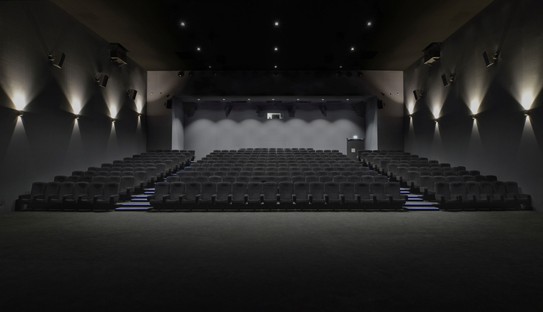 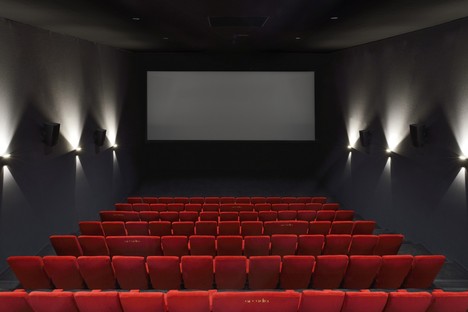 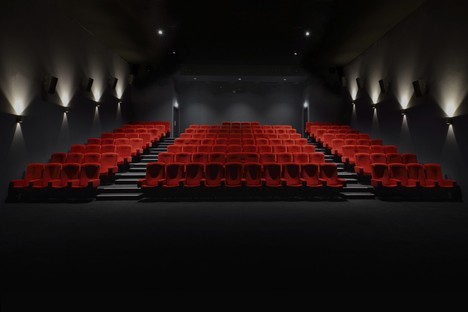 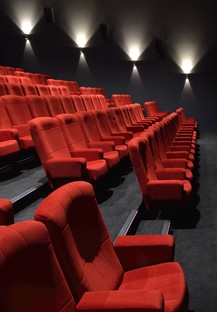 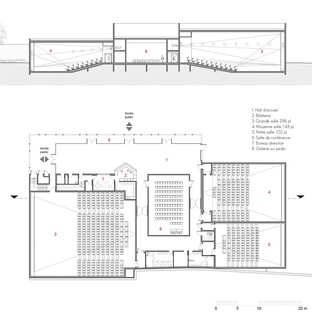