Next to Khao Yai national park, a very popular tourist attraction near Bangkok, is a project inspired by the idea of minimal impact on the environment. TA-CHA Design’s Binary Wood House is a passive building inspired by the Korat House and based on an alternation of solids and hollows. 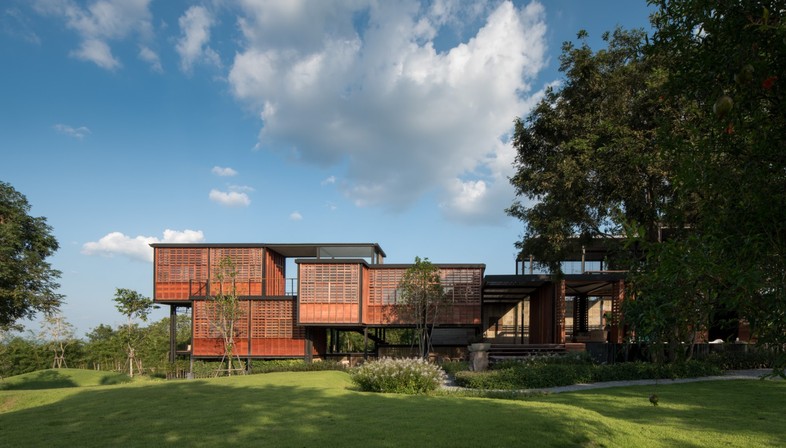 “Binary Wood House” is a home designed by Thai studio Ta-cha in Pak Chong district, Nakhon Ratchasima province, near one of Thailand’s biggest national parks, Khao Yai. The project impresses with its ability to be structured and cosy even though it can be taken apart quickly and easily, dismantled with reclamation of the materials for recycling, allowing it to disappear with minimal environmental impact.
The home is located not just anywhere, but near one of Thailand’s first national parks, established in 1962 and a UNESCO World Heritage Site since 2005. Tropical forest alternates with plains covering more than 2000 square kilometres, forming a protected area for hundreds of bird, mammal, reptile and amphibian species. The park’s popularity as a tourist attraction has resulted in construction of luxury tourism facilities around the area in the past few decades; the house designed by Ta-cha contrasts with this tendency.
Commissioned by a family from Bangkok, the Thai capital which is a privileged source of nature tourism every year, the home was initially designed for rental, especially between November and February, when the winter months bring a cooler climate. The architects say that the project later changed direction to become a family holiday home, with the declared goal of incorporating human living into nature without the consequences of a conventional approach to construction.
From start to finish, the project sought to employ the construction technologies and climate control systems that would have the least possible impact on the existing balance, so that it could be taken apart in the future without leaving an obvious footprint.
On the basis of the idea of adapting to their surroundings, respect and comprehension of history, the starting point of the design was the construction technique used in the “Korat home”, a traditional type of construction in the area, a rectangular home built on a single level raised above the ground with a gabled roof, modular and entirely prefabricated out of wood. The trussed roof is supported by a pillar structure that divides the home into sectors equal in width,length and height, while the side surfaces are filled in with wooden panels. This is the system used in the “Binary Wood House”, but with a few differences compared to the traditional method: the frame is made of metal, the roof is not gabled but flat, and it has a more complex layout on two levels. Broken down into parts extending along the ground, the house is dematerialised, extending in a non-linear, organic fashion. As in the traditional constructions, the walls are the result of a modular composition of wooden panels (in this case 3.40 x 3.40 metres), intelligently also used as sunbreaks: metal and wood are combined in this highly flexible prefabricated structure, give the home a lightweight image like that of a temporary pavilion.
The lot is located on a hill sloping down to the north, topped by Phayung or Thai rosewood trees, a rare protected species which the project preserves. It was decided that the layout of the home would be oriented according to the direction of the lot, so that the two longer sides face east and west, with the ends of the building facing north and south. The southern end is sheltered by the rosewood trees, cooling down the rooms most exposed to the sun’s rays. The eastern side becomes the more private side, sheltered by the project’s only concrete wall, rising from ground level up to the first floor, while the western side is the building’s public face and opens onto its natural surroundings in the garden. To prevent the heat from making spaces unusable, Ta-cha designed a big living area on the first floor made up of separate but connected “moments”. Each of these spaces alternates closed and open walls, empty and full spaces (hence the adjective “binary” describing the home), using the cool wind from the hill for ventilation. This passive climate control system is assisted by the L-shaped pool of water to the west, connected with the living room by a few steps, which helps increase the moisture level in the home. The layout of the home includes a number of different living spaces, including a big rope hammock taking up an entire shady module to the south, a wooden swinging seat in the concrete wall and other lounge areas shaded by sunbreaks, which each member of the family may use at different times of day. Thus the home delivers a message encouraging people to change their habits as the sun travels through the sky, avoiding the need for any kind of forced climate control system.
On the basis of this principle, the home’s entire frame is made of metal, preferred over concrete because it can easily be assembled, then taken apart again and recycled without waste.
80% of the wood used in the building is itself reclaimed, and was repainted and assigned on the basis of different functions in the home. All the work on the construction site was done by local craftspeople, cutting transportation costs.
This approach encouraging environmentally friendly practices is completed by the idea of building the home on stilts. This is not only inspired by historic constructions in the area but reduces the building’s impact on the earth, allowing small animals to feed undisturbed and plants to grow without interruption, regulating moisture from the ground and maintaining proper air circulation, while allowing the soil to absorb water naturally. 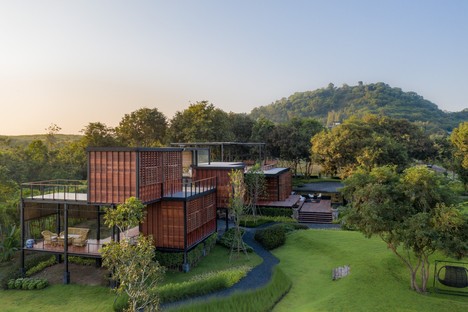 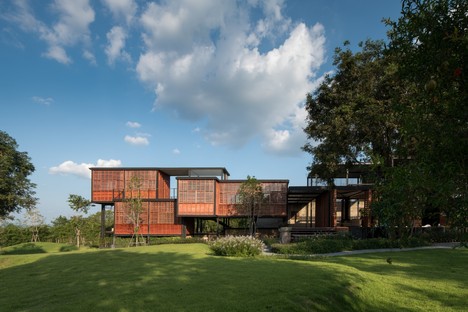 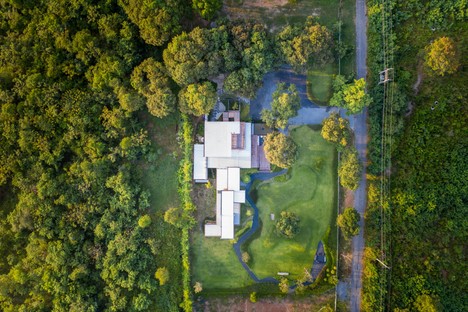 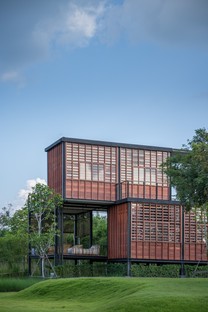 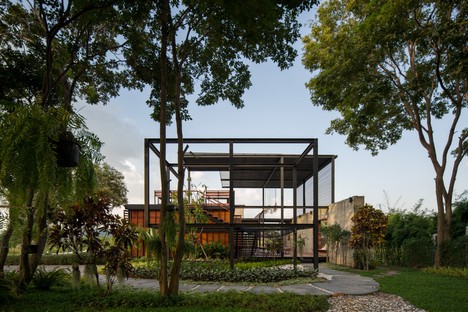 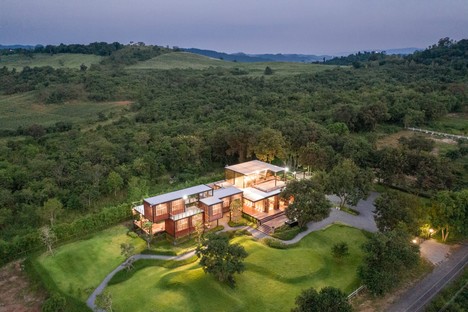 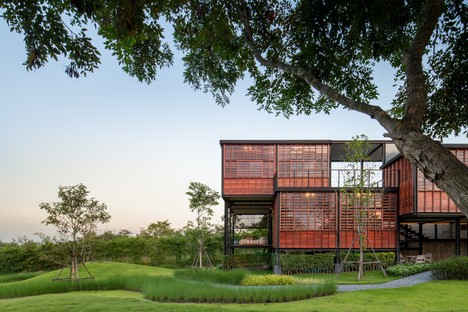 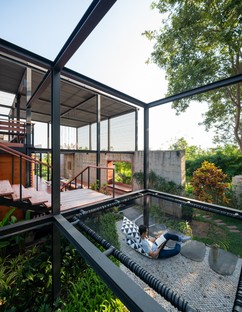 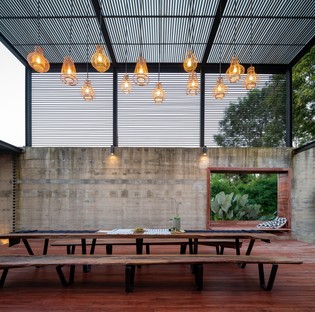 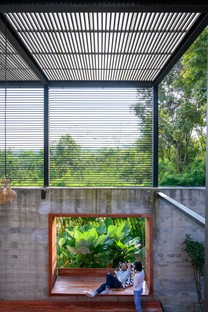 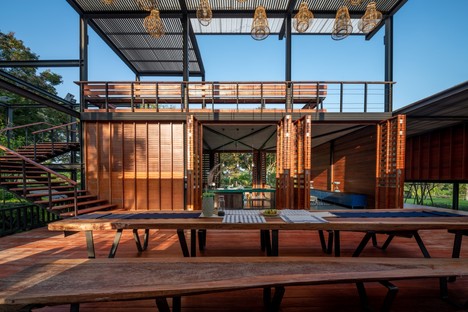 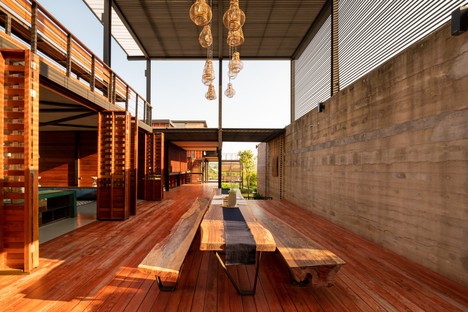 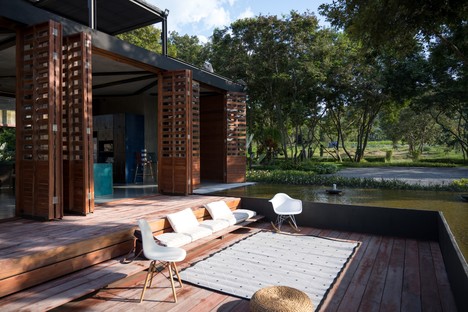 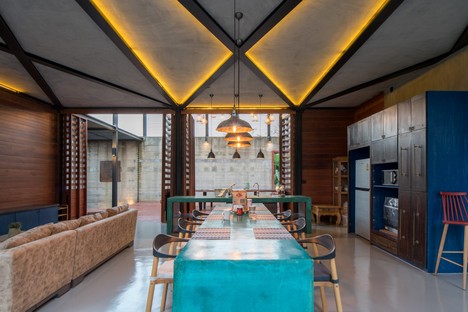 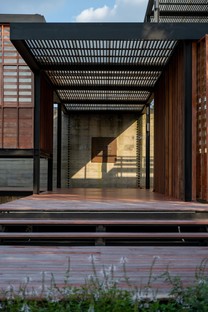 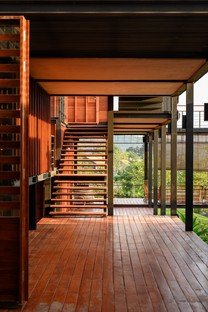 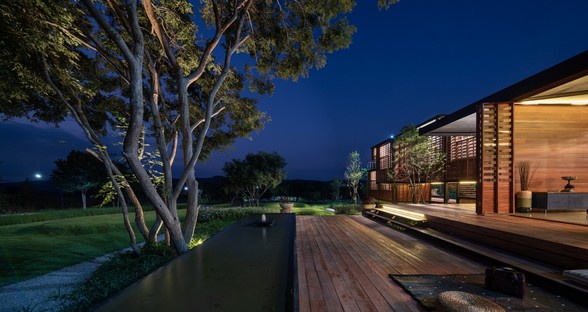 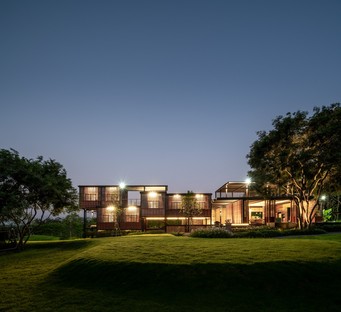 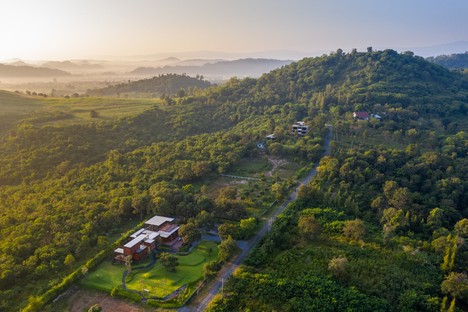 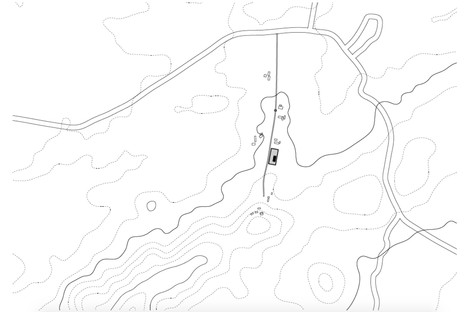 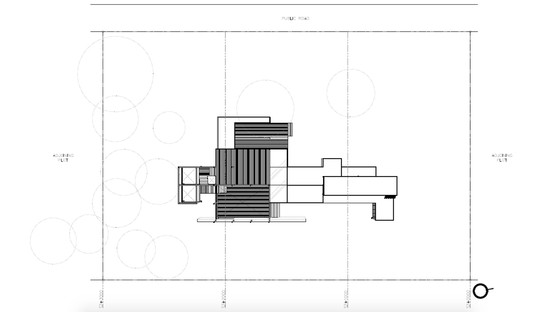 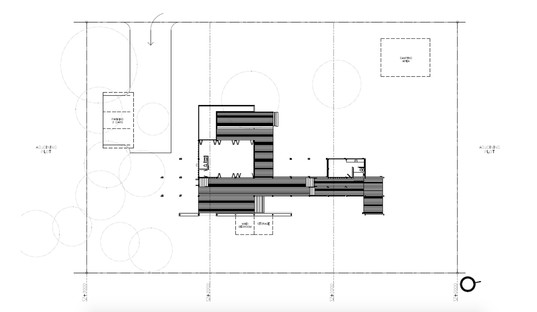 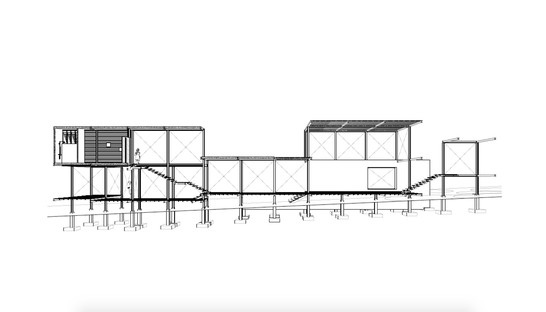 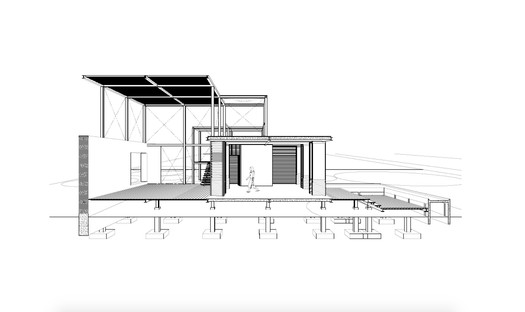 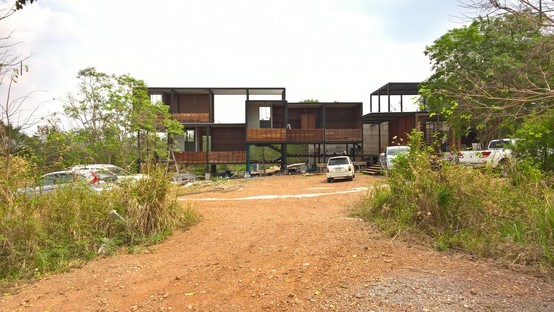 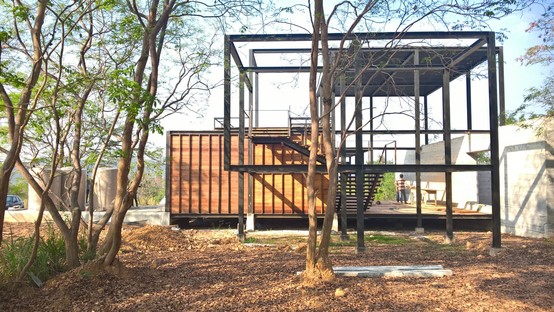