Steven Holl: The REACH, JFK Center for the Performing Arts

Steven Holl goes beyond the concept of the monument in The REACH, an expansion on the JFK Center for the Performing Arts in Washington DC. The campus confirms the Kennedy Center’s status as a forward-looking artistic institution and celebrates JFK and his important contribution to American culture. 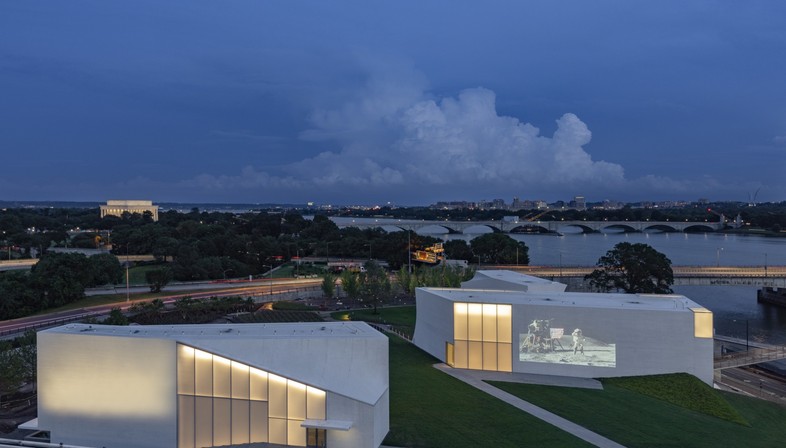 The new expansion on the JFK Center for the Performing Arts opened on September 7 with a festival featuring big names in music. THE REACH, in Washington DC, was designed by Steven Holl Architects beginning in 2012.
Set in a landscape studded with memorials to American history (the Washington Monument, the Lincoln Memorial, and the original JFK Center for the Performing Arts building by Edward Durell Stone), THE REACH sets aside the traditional concept of the monument in favour of a building that concedes its spaces, focusing on the creation of spaces at the service of the arts. .
The idea is to create a “living memorial”, says architect Steven Holl, in which the structure plays an “active” role in the landscape of Washington’s big monumental park. The mission of the expansion to the complex was to create a space where the community could experience art first-hand through the direct experience of performance, following an immersive route through spaces of great perceptive quality.
In the context of a project designed to combine buildings with landscape, the three main pavilions stand out in the park as separate iconic, sculptural elements, which in reality conceal, beneath a system of green roofs, a series of open spaces and rehearsal and performance halls, as well as studios and spaces for arts education.
The fragmentation of its volumes and their differences in orientation leave plenty of room for the creation of routes to be travelled in a state of contemplation. Concealing the majority of the expansion in a public park offers the community an opportunity to experience nature, encountering the stages of exploration of the arts in the pavilions. The irregular placement of the three main buildings creates unusual points of view for observing natural and historic landmarks, while providing a backdrop for open-air performances and events. The northern wall of the Skylight Pavilion, in a central position in the park, is available for live broadcasting of performances going on in the Kennedy Center.
In addition to the pool in front of the River Pavilion, recalling the presence of the Potomac River, on the banks of which the memorial stands, the masterplan also includes an opportunity to remember the life of President Kennedy: a stand of 35 gingko trees to the south pays homage to the 35th president of the United States; while the big green terrace symbolises the PT-109, the patrol torpedo boat that JFK commanded in the Pacific during World War II, when he rescued the surviving members of his crew after the Japanese sunk the vessel.
Viewed as a whole, from a distance, the three pavilions are white monoliths that capture the light. The curve of a number of walls augments the viewer’s sensation that they are true sculptures on an architectural scale. But, upon approaching, the visitor can see that the walls are built of concrete panels coloured white, and that each of them has a sort of surface finish impressed on it by the print of the Douglas fir wood used to make the formworks. This makes each of these differently shaped monoliths into a part on a human scale, establishing an unexpected unity among them.
Steven Holl assigns particular importance to the daylight entering the spaces providing access to the rehearsal rooms and event spaces. He uses translucent white film between the layers of glass so that the big windows diffuse light deep down into the pavilion interiors and reflect it outdoors at night, making the pavilions into big shining lanterns. The relationship between art and landscape is of vital importance here, as confirmed by the new ultralight pedestrian bridge from the Skylight Pavilion over the Rock Creek Trail to the Georgetown waterfront.
And that’s not all: another innovation awaits the visitor inside the pavilions. In an interesting interview with the Citylab web site, Garrick Ambrose, senior associate in Steven Holl Architects and a member of the team working on THE REACH, talks about applied research in reinforced concrete developed by the team specifically for the project. Known as crinkle concrete, the material covers the walls of a number of halls, to ensure top acoustic performance. Garrick Ambrose explains that what does the greatest damage in acoustics is the presence of two parallel walls, such as the walls on either side of a room, because sound waves are continually bouncing off the two parallel surfaces. After consulting acoustics expert David Harvey of Harvey Marshall Berling Associates, Steven Holl’s team worked on creation of a surface that would be as random as possible and deep enough to break up the sound waves and mitigate reverberation. The shape, like that of a crinkled piece of paper, was created by pouring concrete into a mould that was created in several stages, first out of crinkled sheets of aluminium, then out of foam and finally rubber before being transformed into formworks for the concrete. The effect is surprisingly dramatic. 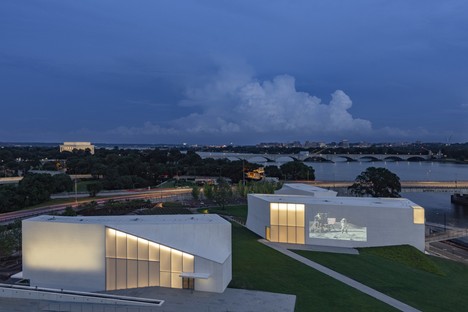 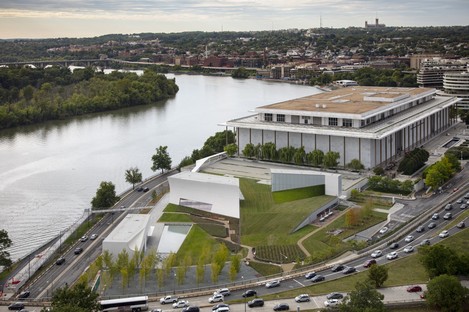 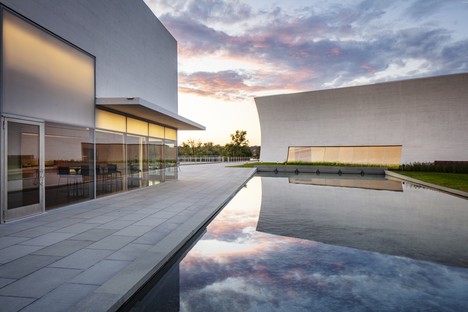 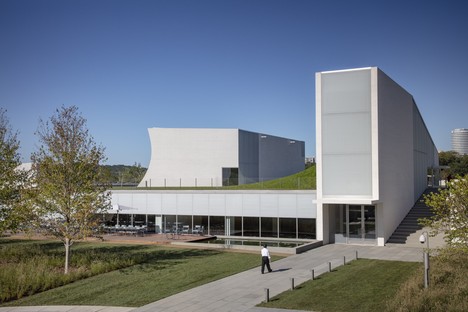 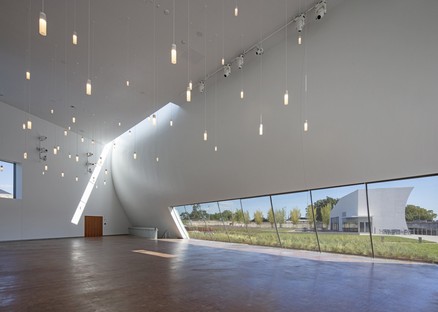 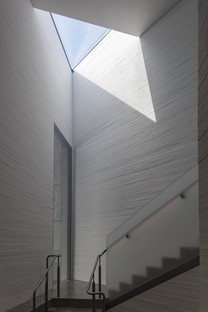 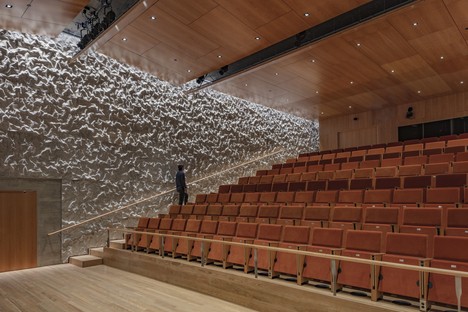 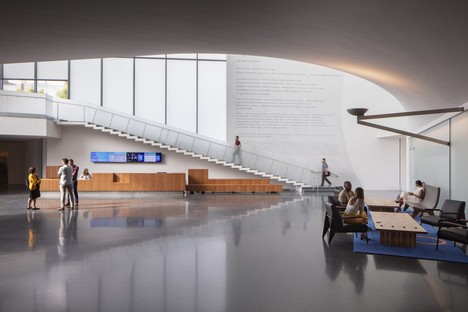 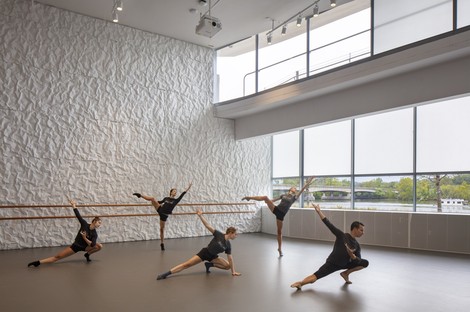 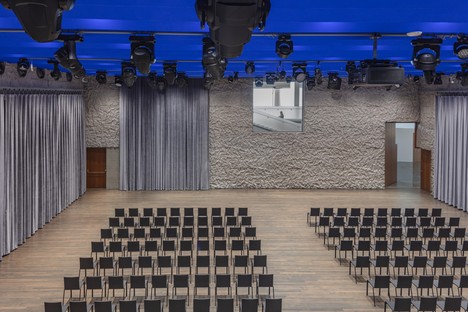 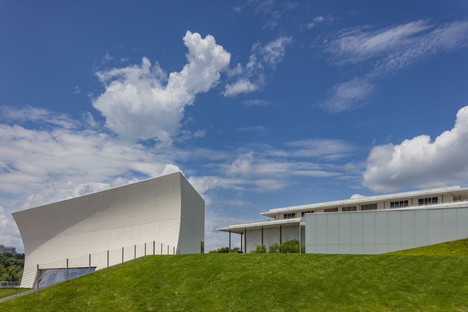 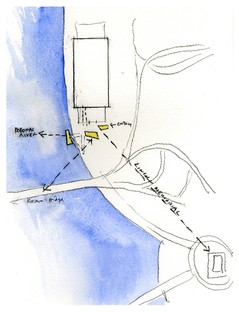 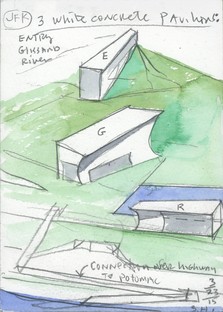 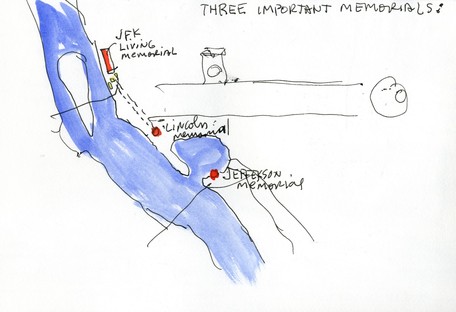 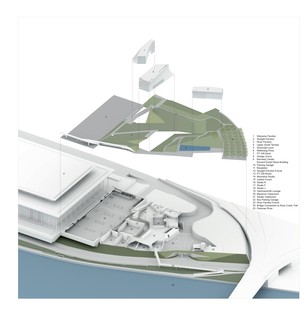 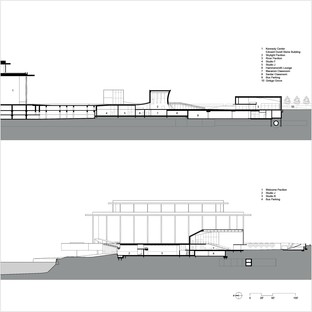 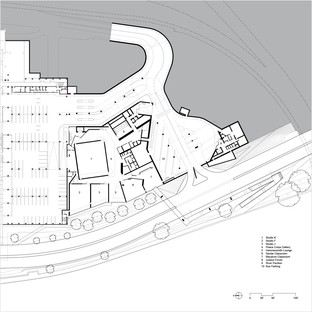 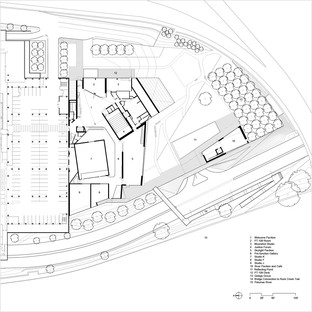