A design that mitigates the impact of the wind and of other climatic factors, a library to be constructed using local and renewable materials, yet setting new standards of sustainability thanks to sophisticated systems for controlling and managing energy consumption: these are some of the key elements which allowed the Snøhetta architecture studio to win the international design competition for the Theodore Roosevelt Presidential Library in the city of Medora, in North Dakota. 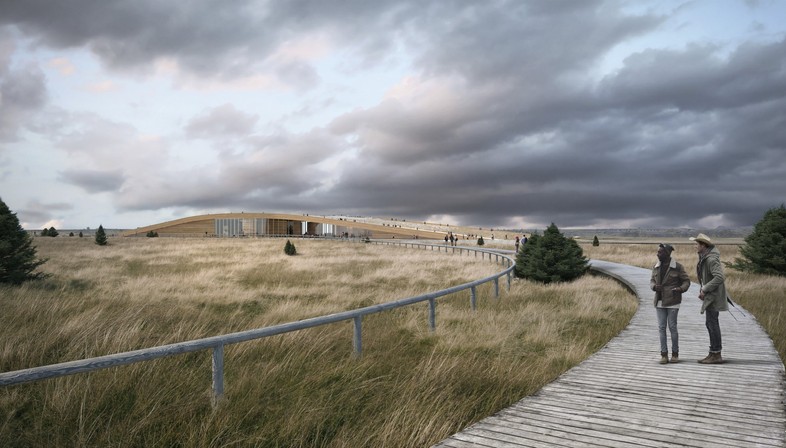 The international competition for the design of the Theodore Roosevelt Presidential Library recently came to an end, the fifteenth American Presidential Library, dedicated to the memory of the 26th president of the United States and Nobel Peace Prize winner in 1906. The library will be built in Medora, North Dakota, in the rugged and dry landscape of the Badlands region. A territory to which Theodore Roosevelt was closely attached and which contributed fundamental experiences to his path of personal growth, a path that would lead him to becoming president of the United States. Following a long selection process that started with a group of 40 candidates, only three finalists were shortlisted: Studio Gang, Henning Larsen and Snøhetta. The three finalist teams were invited to travel to Medora over the summer, in order to meet with the local community and the various project stakeholders. Subsequently, the Theodore Roosevelt Presidential Library Foundation was unanimous in selecting the design proposed by the Snøhetta architecture studio as the winner, which will define the final project in collaboration with a local studio. 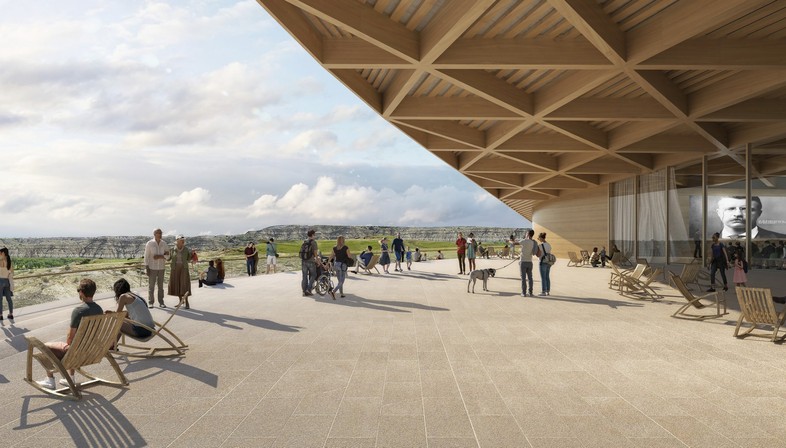 The purpose of the Theodore Roosevelt Presidential Library is to share details on the life and the legacy of the former American president with future generations. Snøhetta’s project for the Library starts precisely from aspects that marked T.R.’s life, in particular his personal reflections on the landscape, his civic commitment and his attention to environmental protection, as well as his search for quiet introspection. The architects translated these elements into a project that does not conclude with the mere construction of a building for the library, but which becomes the construction of a journey that winds through a rich and diverse territory. Small pavilions which, dotted across the landscape, will offer spaces for reflection and for various activities. Architect Craig Edward Dykers, founding partner of Snøhetta, explained that the project is an important investigative tool with which the architects look to give back to the site and to the community much more than what is initially asked of them. In the specific case of the Theodore Roosevelt Presidential Library the architects found inspiration in T.R.’s legacy, integrating the building into the North Dakota Badlands landscape. For example, facing North-East towards the National Park, the library’s roof will visually connect to the historic scenery of the Little Missouri River Valley and, in the distance, to Elkhorn Ranch, establishing a close link between the past and the future, the origins and the Library.
The location of the building was also carefully selected to preserve the landscape of the national park, respecting one of the former president’s main legacies: the conservation and importance of national parks. The library will serve both as a backdrop and as a catalyst for the attention of visitors taking part in educational walks.
The visiting route will be accompanied by several paths, which will branch out from the main path to several small pavilions, corners where visitors can carry out activities or admire the landscape or simply stop and reflect on it.
The project created by the Snøhetta firm mitigates the impact of wind and of other climatic factors, relies on the use of local and renewable materials and sets new standards of sustainability, thanks to sophisticated systems for controlling and managing energy consumption, so that the Library can be accessible in all seasons. 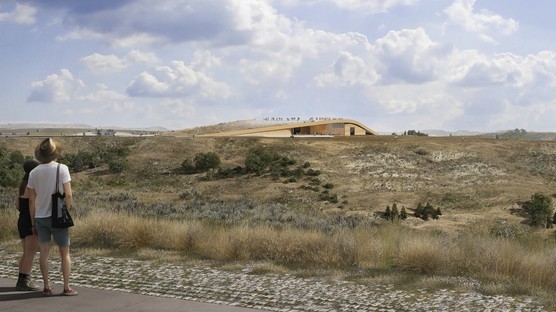 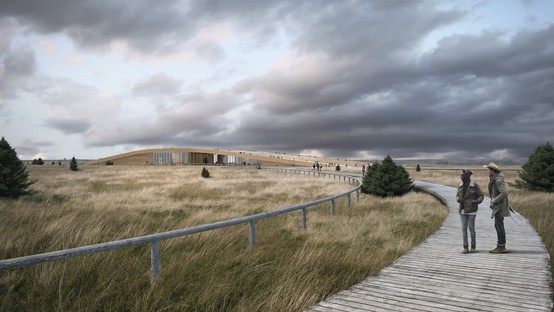 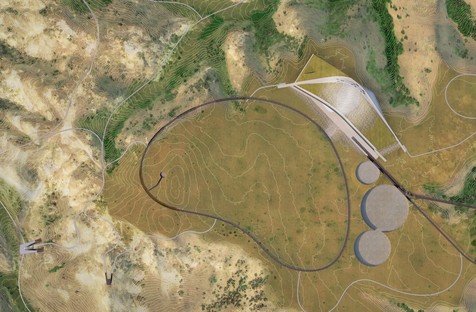 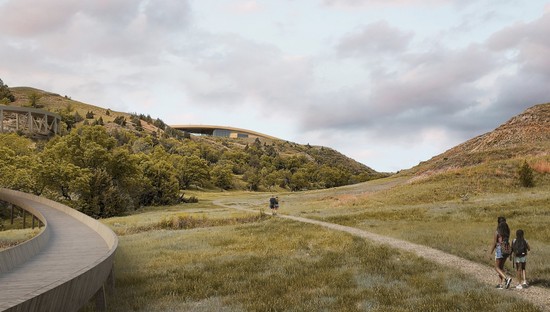 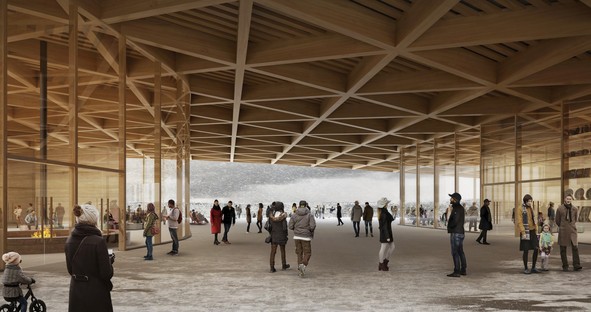 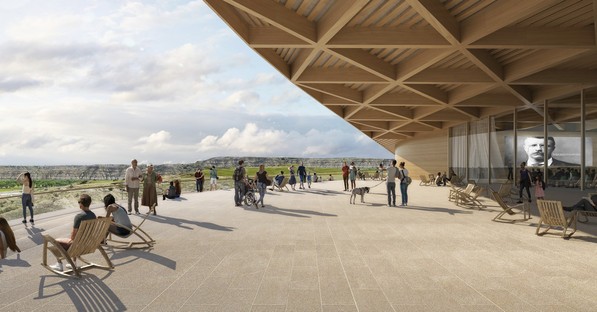 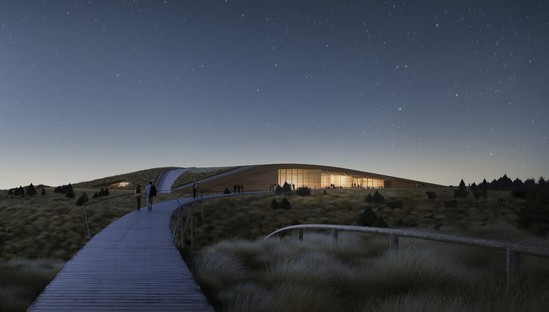 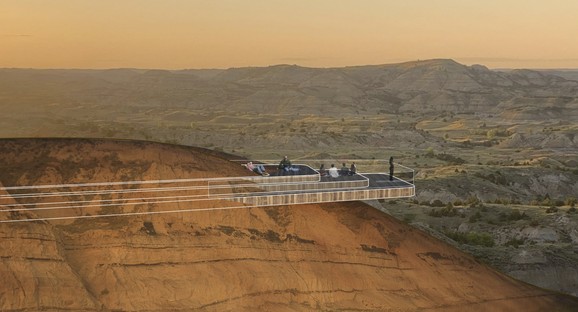 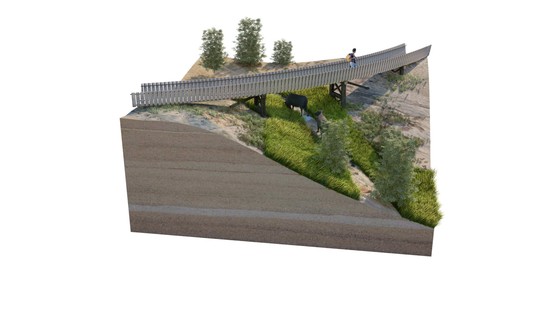 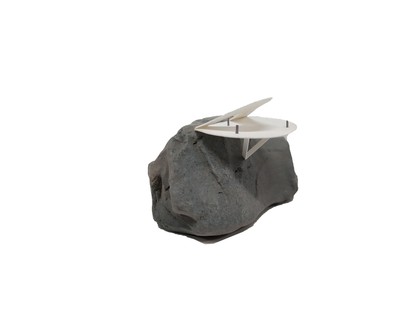 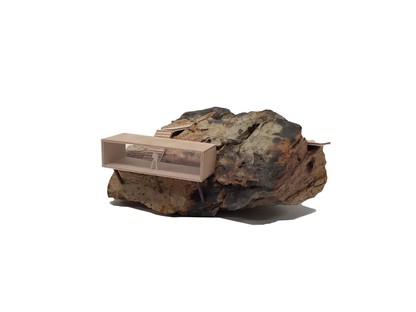 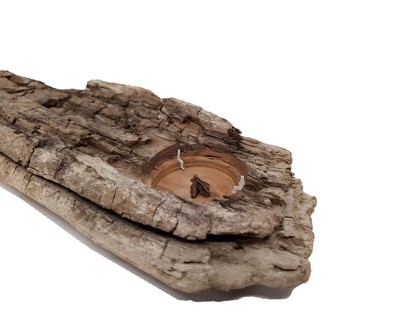 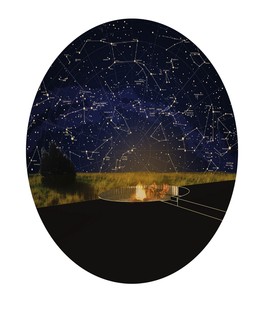