In Cibum is the Advanced School for Gastronomic Training in Pontecagnano (in the province of Salerno, in Italy) designed by architect Sabrina Masala for a company operating in the training and recruitment sectors. The architect transformed a former carpentry shop housed in one of the many prefabricated sheds with no architectural value scattered throughout Campania’s industrial suburbs, into an elegant building that performs the multiple functions of the training school and plays an important role in terms of communication. 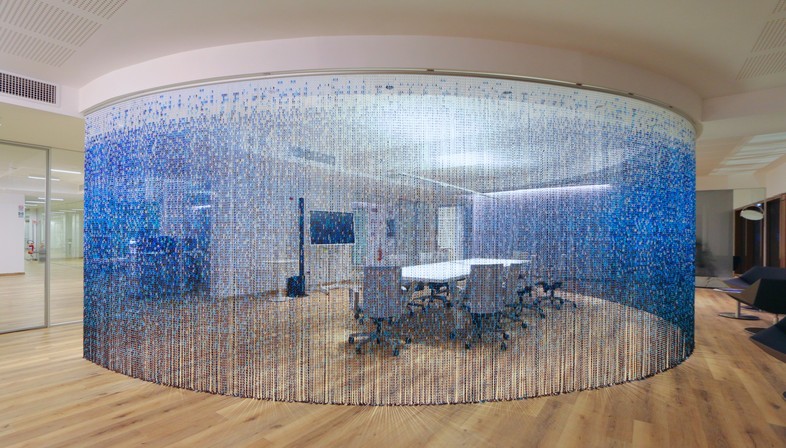 In Pontecagnano (in the province of Salerno, in Italy), east of the industrial area of Salerno, architect Sabrina Masala transformed a prefabricated shed with no architectural value into an elegant building which, for In Cibum, Advanced School for Gastronomic Training, performs multiple functions.The project was led by the FTMS Group, operating in the training and recruitment sectors.
Architect Sabrina Masala adopted Leon Battista Alberti’s double vision, for whom the city is like a big house and the house, in turn, is like a small city, also used by Palladio and Louis Kahn, yet applied to an industrial building. The guiding idea of the project is to create an anthropocentric working environment. The architect followed the traditional approach represented in Campania by important factories of the past, such as the Bourbon factory in San Leucio, the octagonal tobacco factory in Eboli, built at the beginning of the 20th century, or the Olivetti factory in Pozzuoli, designed in the 1950s by Luigi Cosenza. Of the building’s three levels, the ground floor is dedicated to the cooking school and is divided into 5 large areas, plus ancillary spaces. The functional distribution takes into account the characteristics and specific aspects of each training area. For instance, the pizza school is a large space with three different types of ovens and a separate tasting area. The preparations of this type of gastronomy are linked to the simplicity and naturalness of the products used in the process. For this reason, the pizza school area is directly connected to the garden and is characterised by a beautiful view over the outdoor area. For the pastry school, where precision and attention are critical, the architect designed a soundproof and austere environment. The large kitchen, where 25 people can work at the same time, was built near the 80-seat auditorium and the area dedicated to the professionalising cooking school, with its modern and technological equipment, overlooks the artificial vegetable garden. 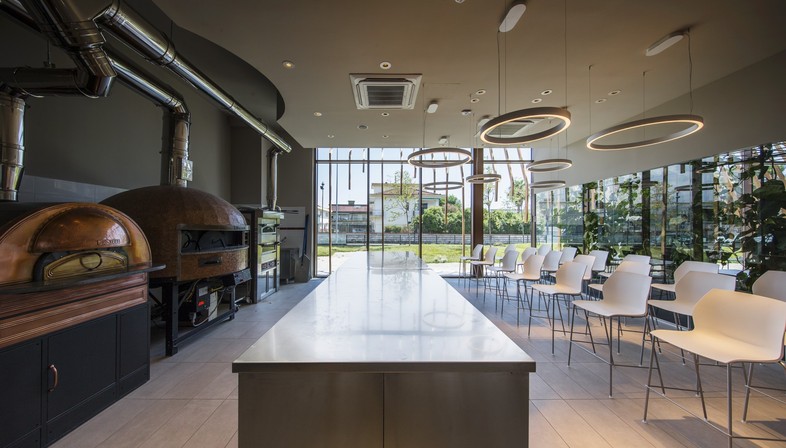 The two upper levels of the building were designed with rigour, as well as sobriety. The second floor is intended for corporate training activities and spin-offs, while the third floor is, on the other hand, dedicated to employees of the training company. Despite the original building being a shed, architect Sabrina Masala managed to create a very bright floor with large, well-lit and soundproofed rooms, making the best of the well-designed glazed solutions. For the meeting room, the architect designed a curved curtain made of coloured chains that physically separates the room from the glass façade overlooking the garden. However, it does not divide the space, making it possible to perceive it in all its spatiality.
On this floor, a 150 square metre nursery, a recreational area and a 100 square metre gym featuring Technogym equipment were also created. This is further proof of the client’s sensibility and of the need for an anthropocentric approach to the project. The solutions adopted by the architect for the façade link the building to its context and retain the memory of its origins. The colour chosen for the coating is a warm tone reminiscent of the colour of soil in the area. The wood, which wraps the original structure and gives it a sinuous shape recalls, instead, the original purpose of the shed, which used to be a carpentry shop. 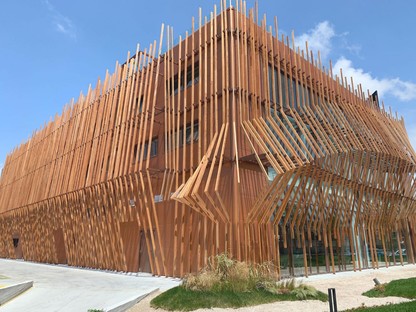 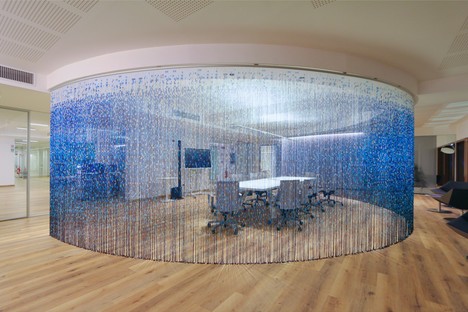 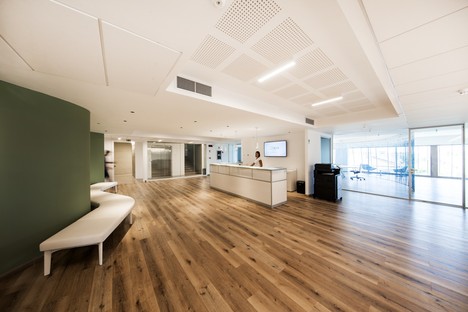 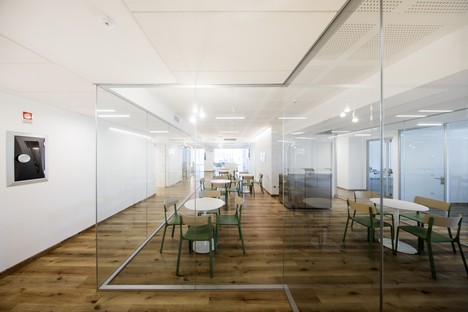 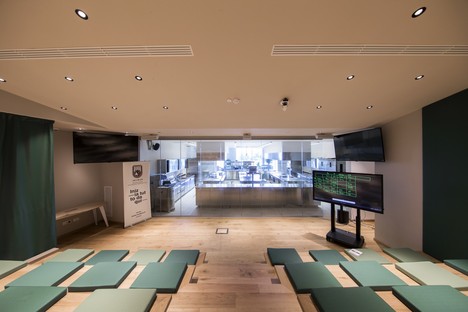 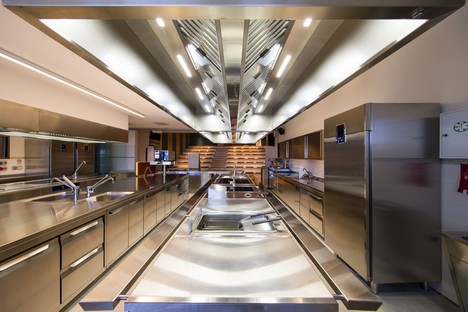 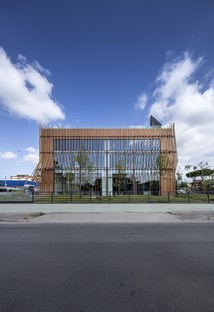 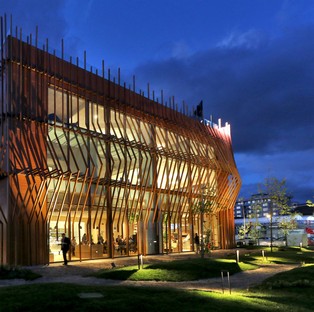 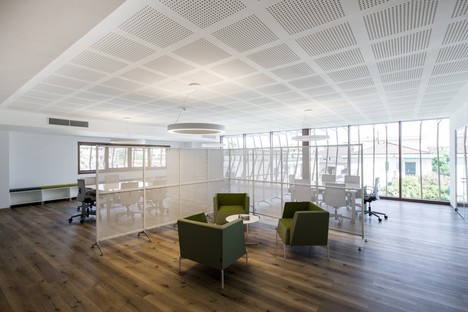 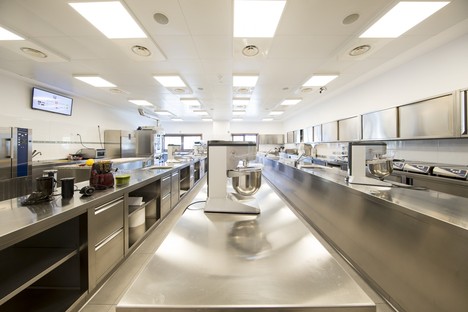 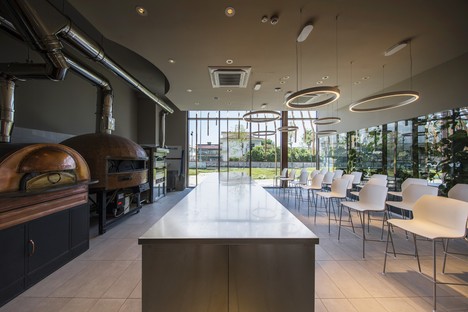 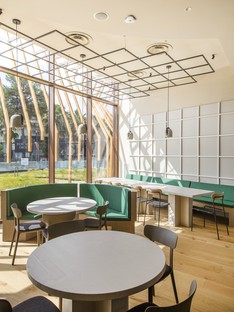 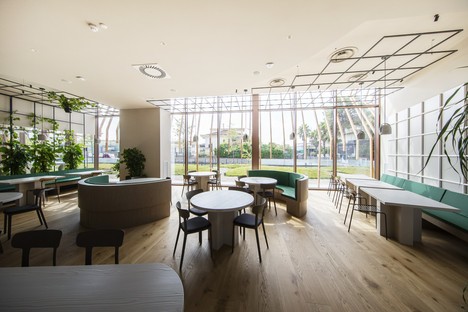 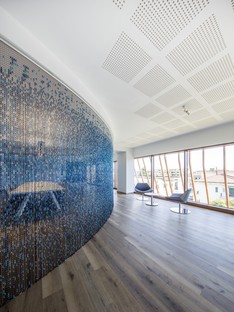 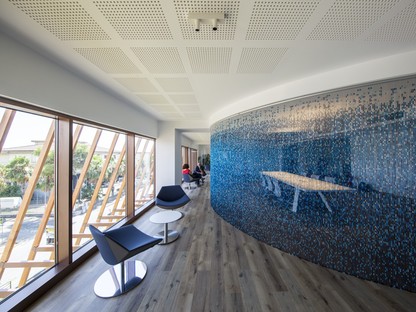 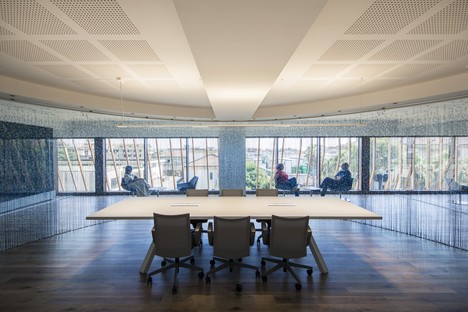